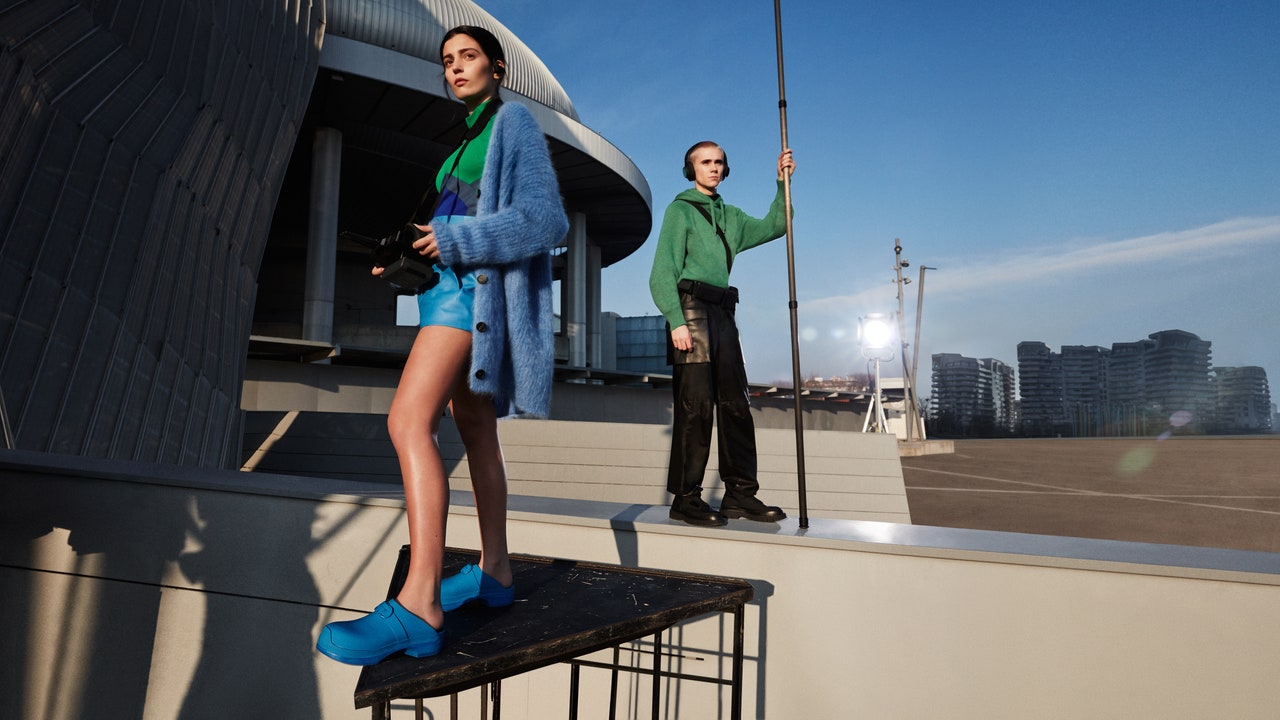 A Love Story in Two-and-a-Half Minutes: Wim Wenders on His New Film for Salvatore Ferragamo

The celebrated director talks to Vogue about A Future Together and other important topics like fashion, film, and love.

It’s heritage, not nostalgia, that’s driving some interesting projects in the industry right now. Demna Gvaslaia’s debut couture collection for Balenciaga demonstrated that fashion can be both rooted in history and forward-looking. That’s also the case at Salvatore Ferragamo. Building on the founder’s connection to the big screen (he founded the Hollywood Boot Shop in California in 1923), the brand continues with its focus on film as storytelling and marketing.

For fall 2021 the house has teamed up with Wim Wenders, the celebrated Academy Award-nominated director, to spin a tale, A Future Together, around the brand’s fall 2021 spacy-agey Future Positive collection. The setting, Milan’s CityLife District, and the clothing and accessories speak to the sci-fi-aspect of the narrative; Wenders brings warmth to the film with a focus on the “together” in the title. 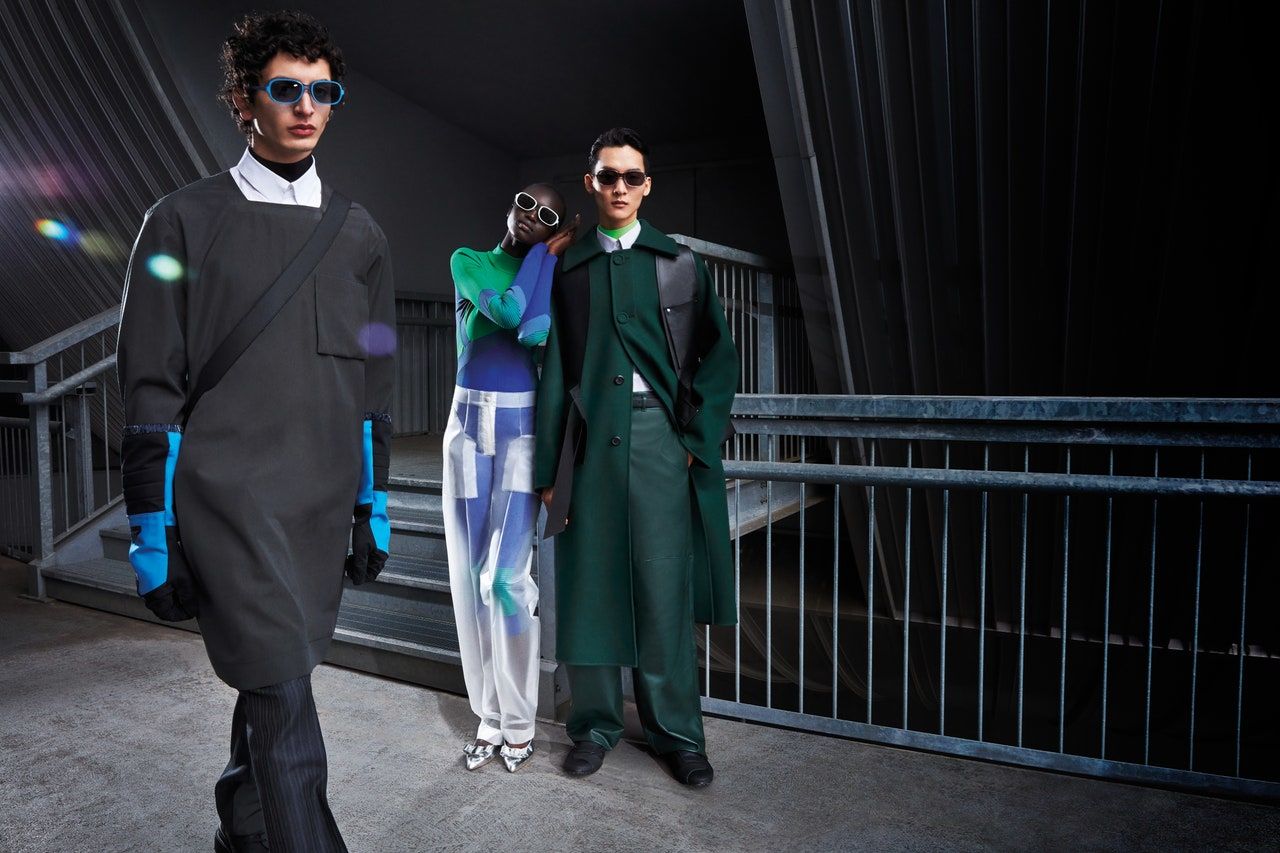 He does this by creating a story within a story: We watch the Italian actress Gaia Girace, playing a director, fall head over heels for her soundman, Swedish musician Felix Sandman, in the course of filming a sci-fi that itself is being recorded. The plot is driven not by dialogue, but by hints and glances, and the audience is drawn in by the wink-wink aspects of the structure, and the promise of young love. 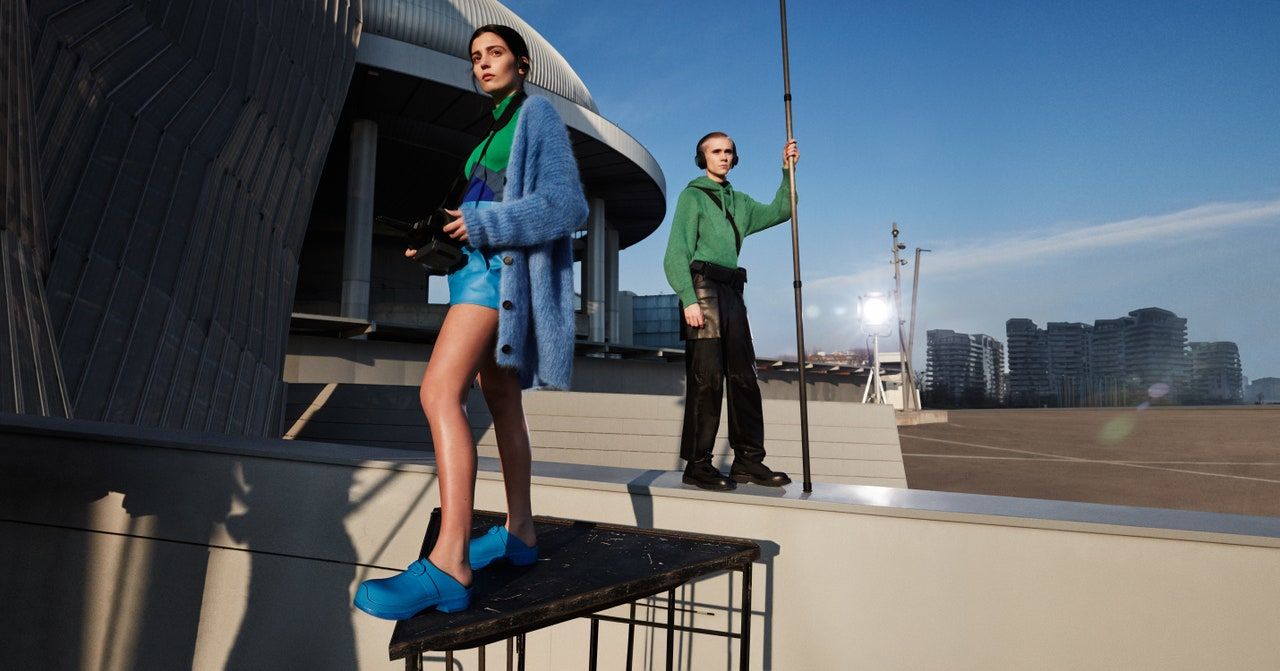 A Future Together is a short about looking forward, and about the promise of what could be when people stick together. “Developing a positively energetic story inside the framework of a futuristic setting is a challenge at a time when the future is generally regarded as bleak and dystopian. But sometimes, when the cards are stacked up against you and you have to fight many obstacles, the result can achieve an extra aura of beauty,” said the director in a statement, adding that the sun came out during the shoot.

This is not the first time Wenders has worked with Ferragamo. In 2004 the director and his wife, Donata, showed their photographs in an exhibition called “Off Scene” at the Museo Salvatore Ferragamo. Here, the director discusses fashion vis-a-vis film and the all-important matter of love.

What can fashion do that film cannot; and vice versa?

Fashion does a lot for creating a zeitgeist, and in that it resembles cinema. Or popular music. Like those, fashion helps to shape the mood and the “climate” of our sense of contemporaneity. Later, we remember a certain year or time period for what we were wearing then and what we were listening to. But fashion also works on a very personal level. It can boost your sense of identity, it can make you feel good or help you express to others who you are, or want to be. Your outfit, your shoes, your coat etc. can really become part of you, a bit like a second skin you’re wearing.

Movies do not work on that level, they form your view of the world and your opinions, sometimes in very subtle and unconscious ways. Which is something that fashion doesn’t really do. Then again, fashion and movies go hand in hand in many ways. What people wear in a movie can soon become the uniform of a whole generation. It’s no accident that the Ferragamo brand started with shoes, especially high heels, that were made famous by some of the great actresses of their time, and that my mother then wore a few months later. Well, everybody else’s mother, too. 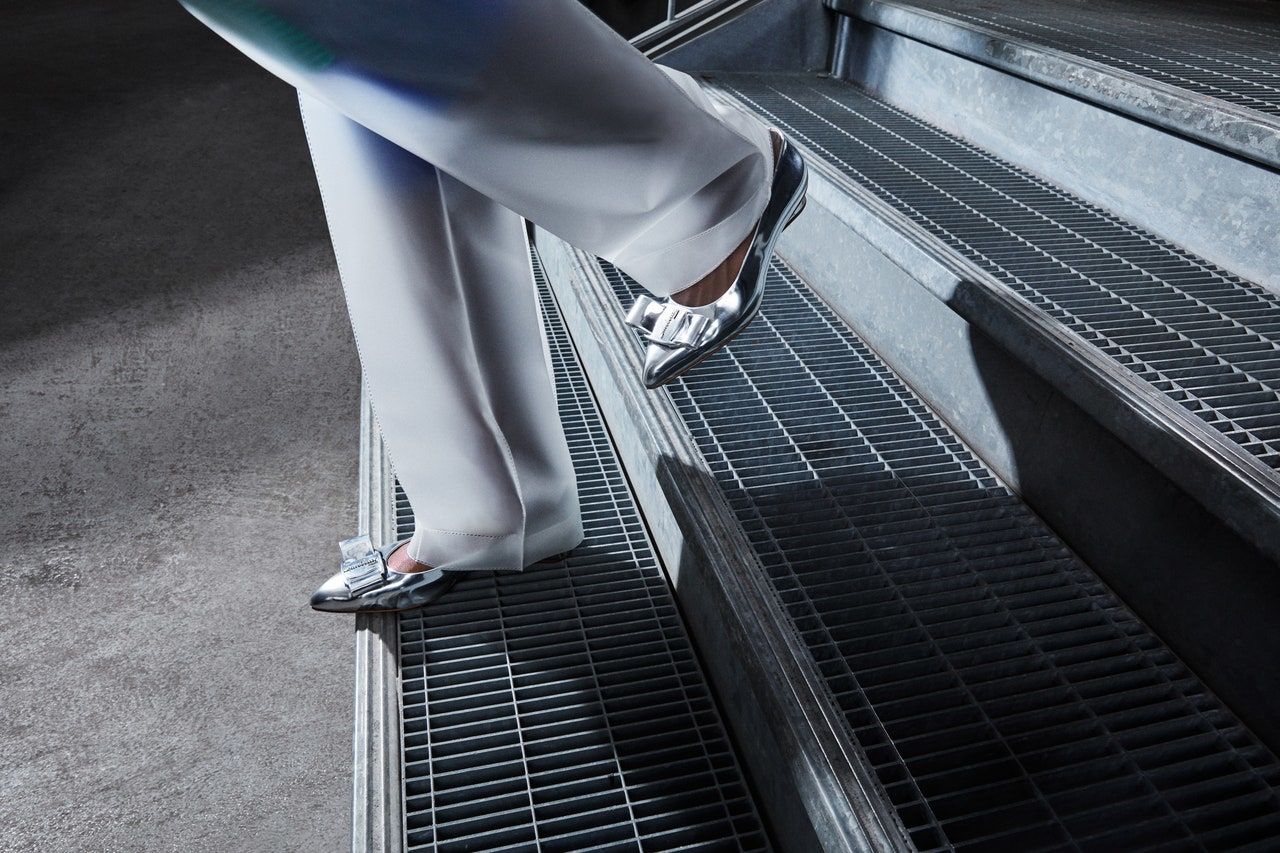 What role has fashion played in your work, and how does this film relate to that?

I was developing an awareness for fashion rather late, when I got a crash course in it by making a film about Yohji Yamamoto. Notebook on Cities and Clothes. I made the film all alone, mostly as a one-man team, and was therefore very connected to Yohji’s craft. I followed him at a very close distance with my own craft, operating my machines myself, just like he took a pencil or scissors. And in doing so, we recognized that our crafts, and jobs, were very related and quite often followed the same patterns of “storytelling.” A research period followed by a writing or designing period, then going into a producing stage, then into editing, then into marketing and distribution.

Anyway, I learned so much about fashion in that year, directly from one of its great 20th century masters, that I remained open and interested in the phenomenon afterwards. Our short film relates to that by showing a lot of fashion on one hand, but including all of that in a storyline that makes it quite obvious and natural that we see all these different outfits. So in the end, you almost do not notice watching fashion, as you enter the world of our central characters, a director and a sound engineer. They are in their world, and you enter it willingly. If you watch a fashion show, you must be willing to watch a fashion show, otherwise you’d be very bored. We showed just as much fashion as you could see on a catwalk, only you’re never really aware of it. You see it through the eyes of our protagonists. 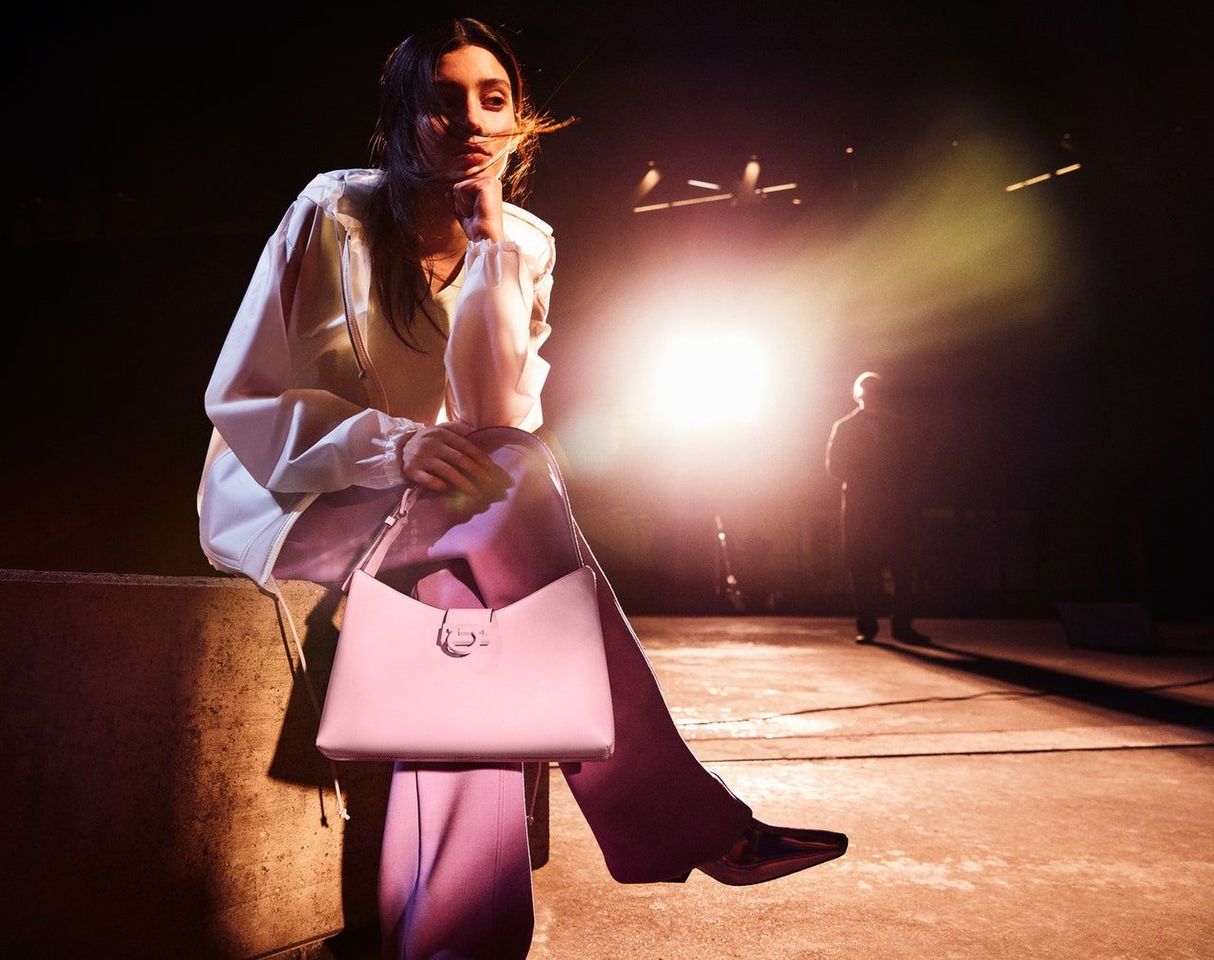 This film documents the making of a film. How does postmodernism figure in this work?

Well, if you think it is a postmodern “touch” that our film also deals with the making of a film, there is no point arguing with you. In my case, that idea never crossed my mind. The self-reflection, so to speak, was just the best solution for an otherwise extremely difficult task. “A film with a sci-fi feeling, set slightly in the future, in Milan, but with an entirely optimistic outlook.” It might sound easy to you, at first, but if you start thinking how many sci-fi movies or near-future science fiction you know that show a positive image of the world, you’ll start realizing the difficulties. We were up against the danger of a dystopian view of the world that the genre inevitably embraces. Sci-fi is always gloomy and dark. The client wanted something joyful, sensual, and positive. I was all for that. That last year we all lived through was terrible and droopy enough. My film inside the film instantly solved these problems. And for once, it allowed me to show many pieces from the amazing new collection. My main protagonists, Angela, the director (played by the extremely talented Gaia Girace) and Paul, the sound engineer (played by the equally bright Felix Sandman), needed a whole lot of actors in front of their camera! Hey, I can handle postmodernism, if it can be by way of a love story! 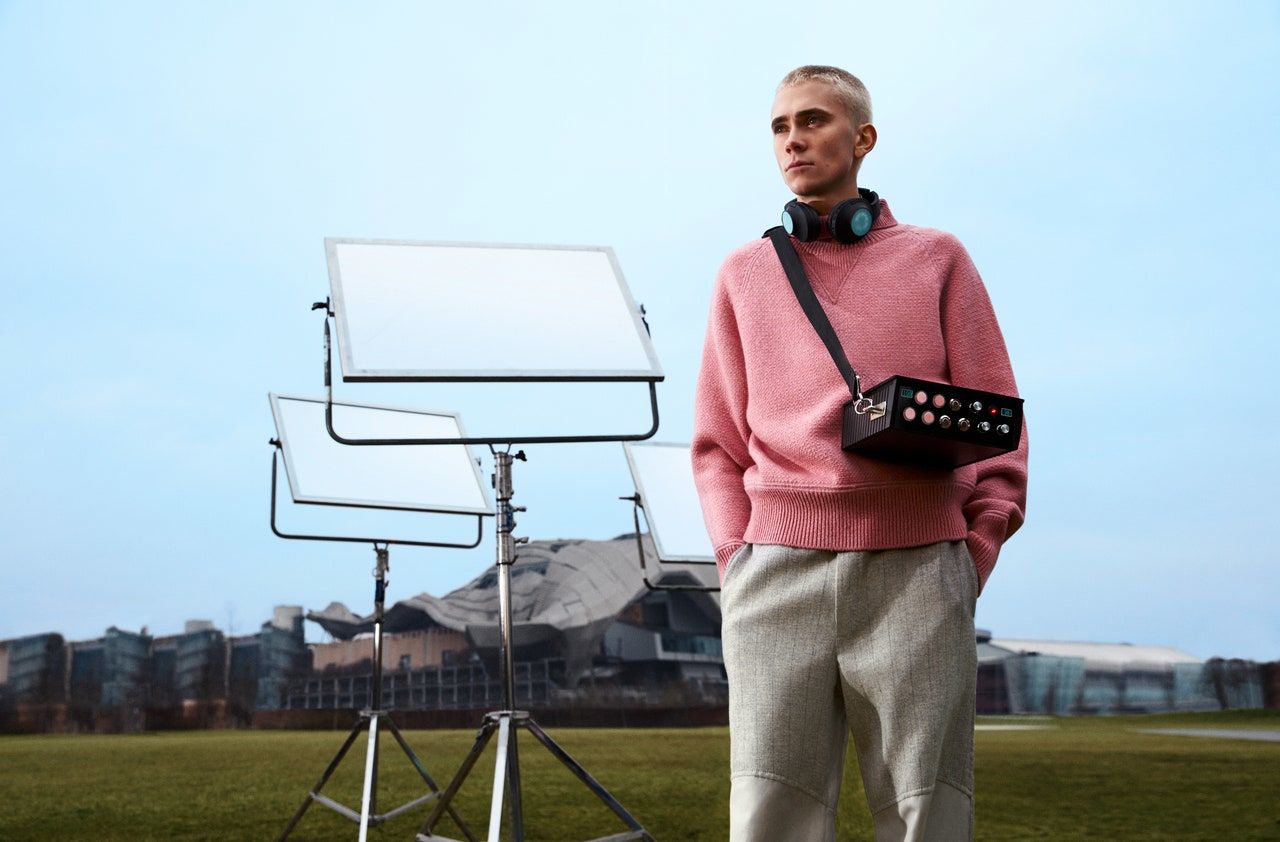 Is love the answer?

Yes. It has been at all times, in the past, in the present, and love will be the answer in the future as well. In our case: You can only do so much in the course of two-and-a-half minutes. You cannot “tell a love story.” But you can let the audience catch a glimpse of something hopeful, joyful, and promising. Something very human that does more than just featuring a brand or a product.