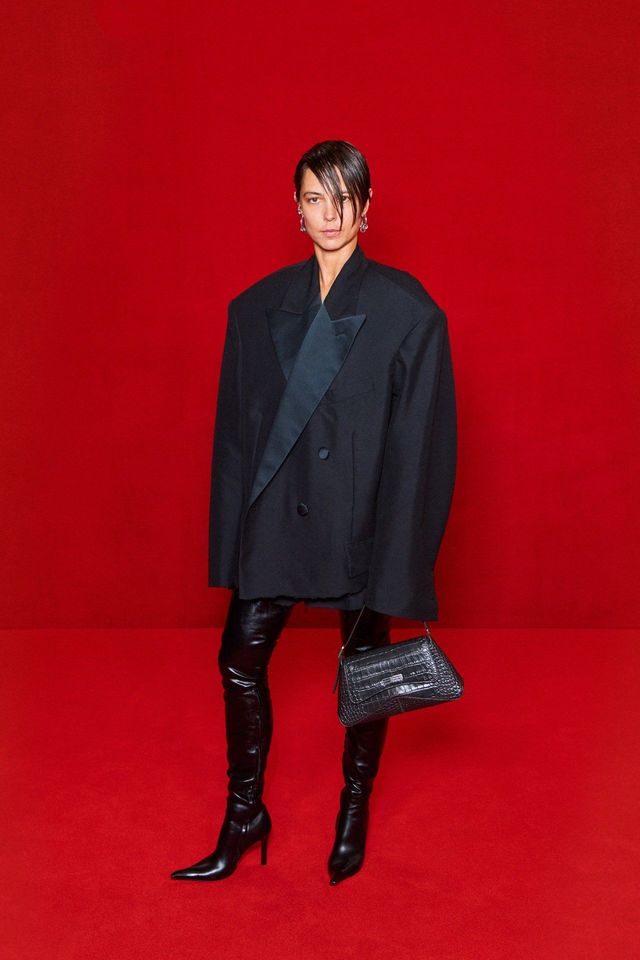 “Well,” remarked Demna Gvasalia, with a considerable amount of laconic understatement, “we needed something fun to happen.” With an epic stroke of his genius for messing with fashion conventions and absurdist social commentary, he staged a Balenciaga return to Paris that was both a fake red carpet celebrity-studded, movie-style premiere event and a real one. “I’ve wanted to do a premiere concept where the guests would be the show for many seasons,” he said. “It was nice to have a social occasion again. I hoped it would make people smile.” Smile? It was hysterical.

The regular fashion show audience was seated inside the Théâtre du Châtelet at 8 p.m., watching a big-screen livestream of the red carpet arrivals going on in a tent outside. Soon, it was clear that everyone was in on the joke: The familiar Balenciaga tribe of Demna’s house models, lining up to pose in character as celebrities; actual celebrities lining up to pose as models; celebrity models posing as celebrity models. Cardi B and Offset! Lewis Hamilton! Dev Hynes! Naomi! Amber! Ella Emhoff! Mark Tuan! Elliot Page! Isabelle Huppert!

Eventually, Demna himself-in a full black face veil, hoodie, and jeans, brought up the rear. As the red carpet contingent moved into the theater, kids in the street were still screaming, 10 deep behind the crash barriers.

Not for them any distinction between fashion, celebrity, and spectacle. Demna gets how they’re thinking—and where he can go with it. Balenciaga has such a vast digital following, that, as he sees it, the whole brand is transitioning into something akin to entertainment. “It’s more like a music or movie business, in the way you can convey things,” he said. “I like exploring these borders.”

What the fashion audience didn’t know: The red carpet performance of the spring 2022 collection was the buildup to an actual film premiere of The Simpsons/Balenciaga, in which Marge and Bart (not to spoil the plot) end up modelling in Paris. “Because I’ve always loved The Simpsons, for its whole tongue-in-cheek nature and the slightly romantic-naive side to it” he approached the producers without much hope that they would ever want to collaborate. “But in fact they did. They saw the blue show-the Parliament one-and liked it. Matt Groening’s been amazing,” he said. The fame of Demna and Balenciaga has spread all the way to Springfield. After this, who knows what worlds he’ll conquer next.
Collection