The entrepreneur’s new show, The Big Shot with Bethenny, is filled with loads of Balmain, Tom Ford, and more.

Bethenny Frankel is ready for her next chapter. Since departing The Real Housewives of New York City in 2019, the entrepreneur has since been focusing on her many business ventures: her podcast “Just B,” her BStrong initiative serving communities in crisis, and of course her ever-growing Skinnygirl brand. Navigating all of these ventures is a lot for one person to handle-but her new show, premiering on HBO Max tomorrow, is aiming to find her some much-needed help.

Titled The Big Shot with Bethenny, the new series marks Frankel’s much-anticipated return to our TV screens. In it, she seeks to find a vice president of operations to help run the logistics of all her different brands. She puts aspiring business moguls to the test through a series of challenges-whether that’s coming up with an ad campaign for one of her Skinnygirl products, or putting together and running a photo shoot with Frankel at the center of it. “This is a real job that I desperately needed to fill,” Frankel tells Vogue of the concept. “I was prepared to be like The Bachelor, where you don’t like anybody at the end. I wasn’t going to just fake-hire someone that I’ve got to deal with every day. We don’t have a 200-person company where you can put someone in, like, envelope licking.”

Throughout the show, we get to see a different side of Frankel. Where the Housewives leaned into drama and theatrics, we get to see the more business-minded Bethenny at work. Where she readily admits she can be intense at times. “I’m very communicative, specific, and decisive,” she says. “I don’t drop balls. I remember every single detail. It’s almost impossible to keep up. I’m often like, ‘I think you should have a pen and pencil.” But one thing that does fall in line with her Real Housewives days is her taste for fabulous fashion, which plays an important role here. She may not be dressed like your typical boss-a pair of feathered Yves Saint Laurent boots make an appearance-but her choices command any room nonetheless.

In a mostly black and white color palette, her work wardrobe kicks classic New York 9-to-5 style up a notch, or five, thanks to pieces from Balmain, Tom Ford, and Alexander McQueen. “They’re all fashionable and tailored, and a little bit severe,” says Frankel. “I like well-made classics and structure; they’re a little masculine and feminine at the same time.”

What’s even more impressive is Frankel didn’t work with a stylist on these looks, rather pulled directly from her own wardrobe. “It feels inauthentic for someone else to go purchase something for me. I like things to have some connection to who I am and my tastes,” says Frankel. “I like to shop my own closet. I don’t care if it’s current or not current.” A floor-length black Balmain skirt she wears, for instance, is the same one she wore to an Oscars pre-party a few years back. She also remembers buying a leather Tom Ford dress in Beverly Hills five years ago.

While she leans into sharp, tailored silhouettes on the show, Frankel also emphasizes that-being a working mom-comfort and versatility is always key for her. “I am 100 percent about comfort,” she says. “I’ve gotten rid of anything that doesn’t feel really luxurious, cozy, and comfortable.” She also likes to venture outside of her signature style once in a while. For an episode centered around her birthday festivities, for instance, she wears a pink, feathered Pamella Roland dress. And in the very first episode, she also wears a sequined tracksuit on-set that she got on vacation in Italy. “Paris Hilton loves it,” says Frankel of the look. “She’s like, ‘where can I get that?’”

Below, a closer look at some of Frankel’s best outfits on the show. 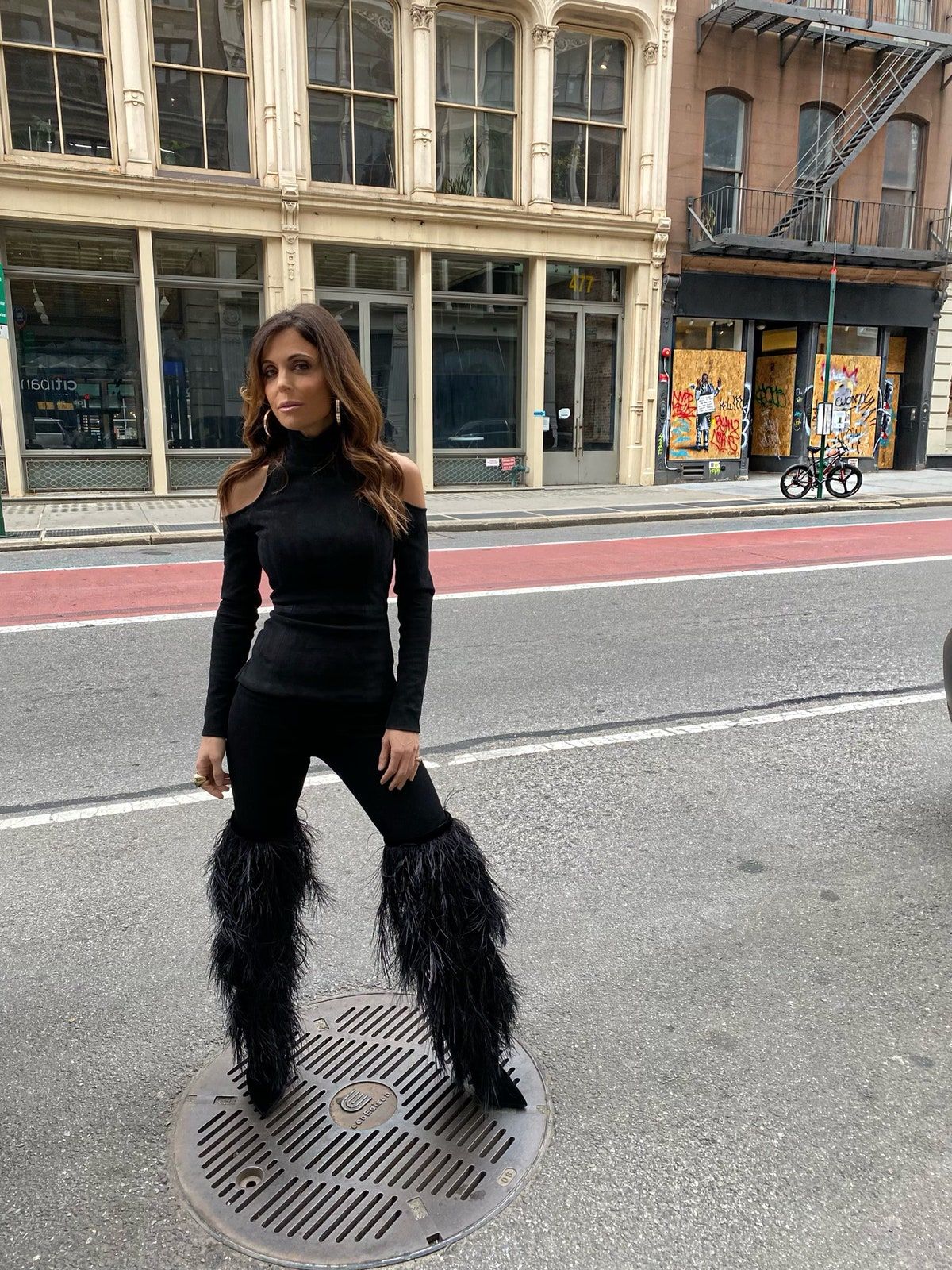 A Balmain suede bodysuit altered to a top, suede pants, and YSL boots. 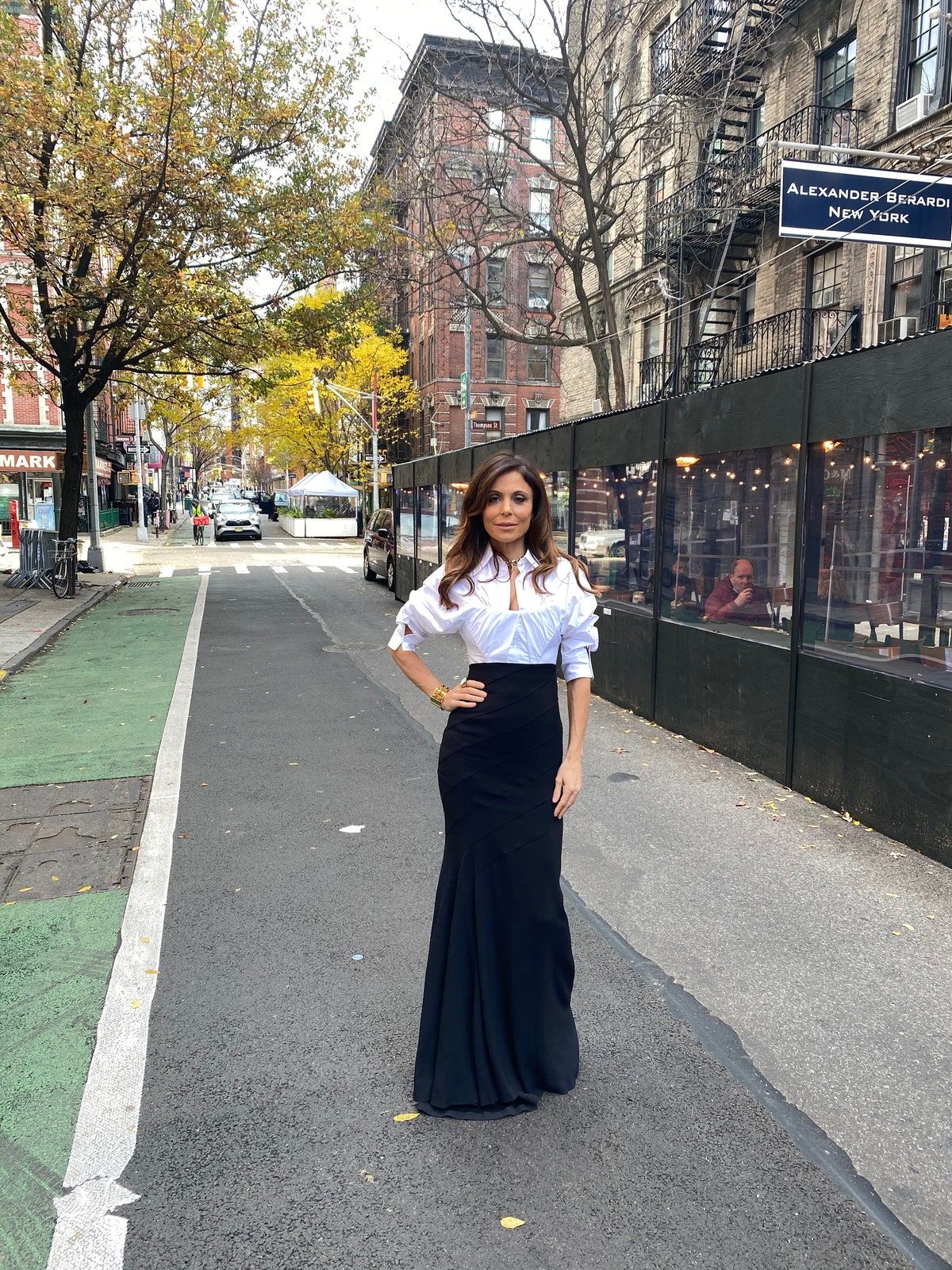 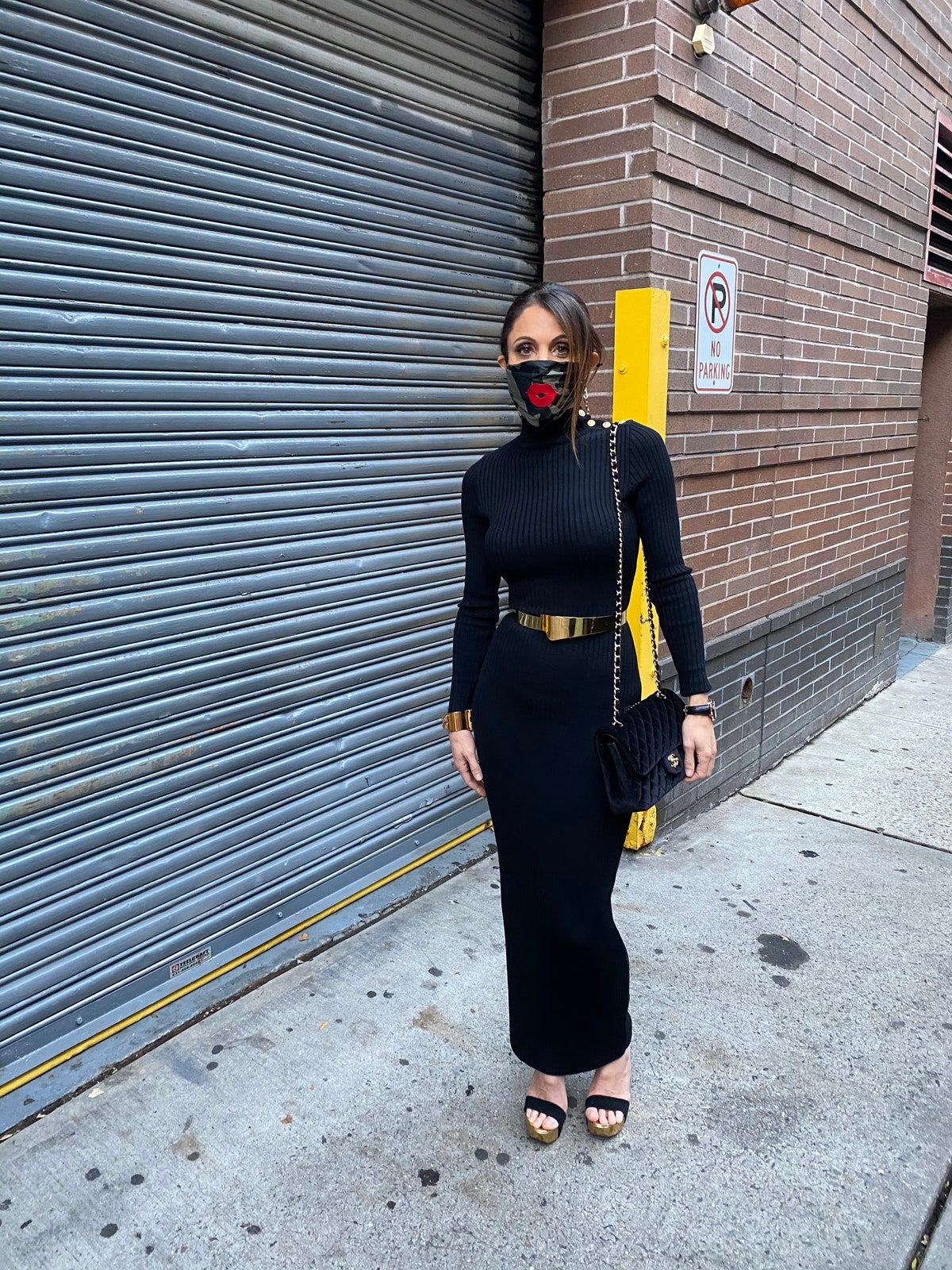 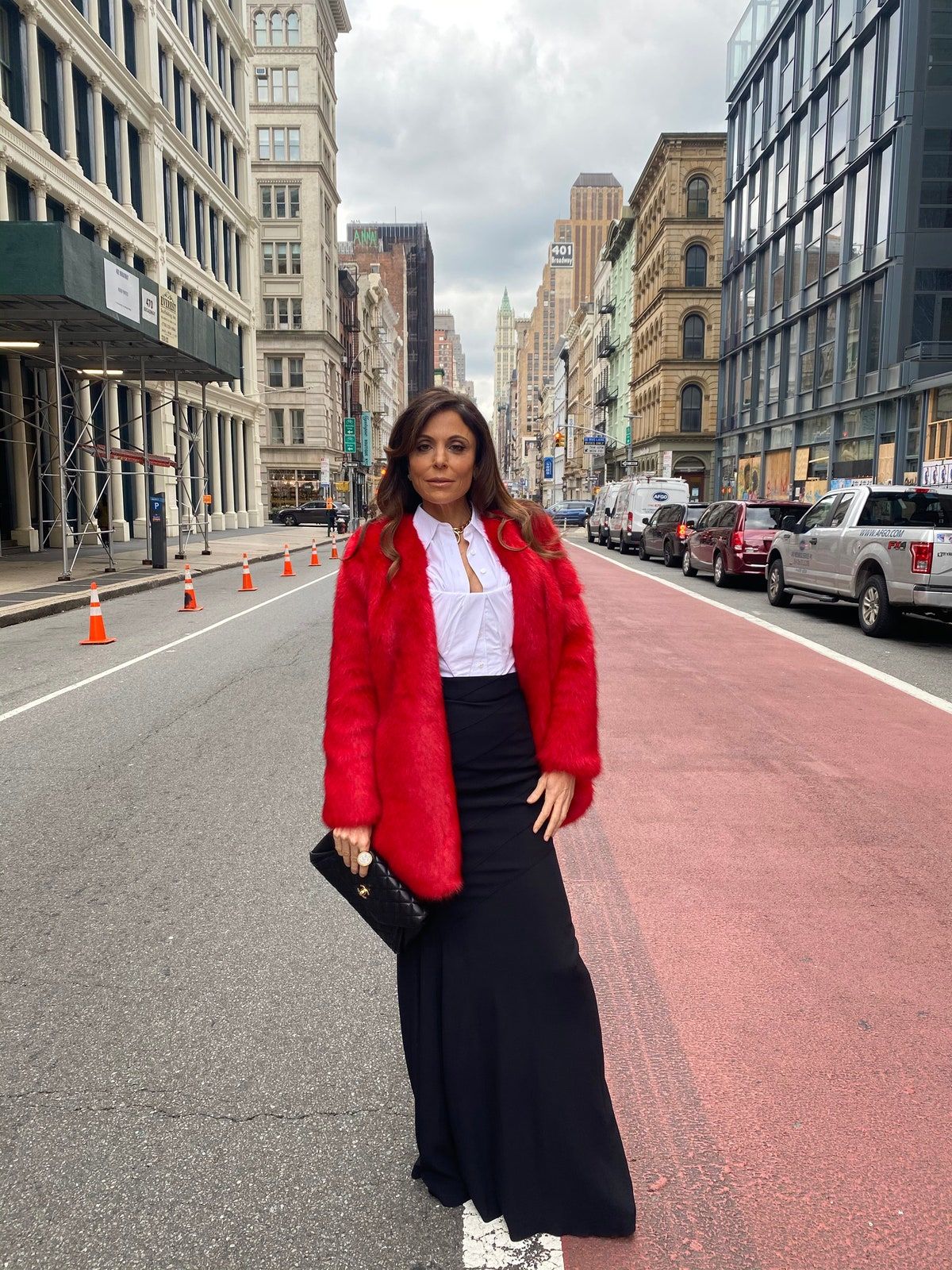 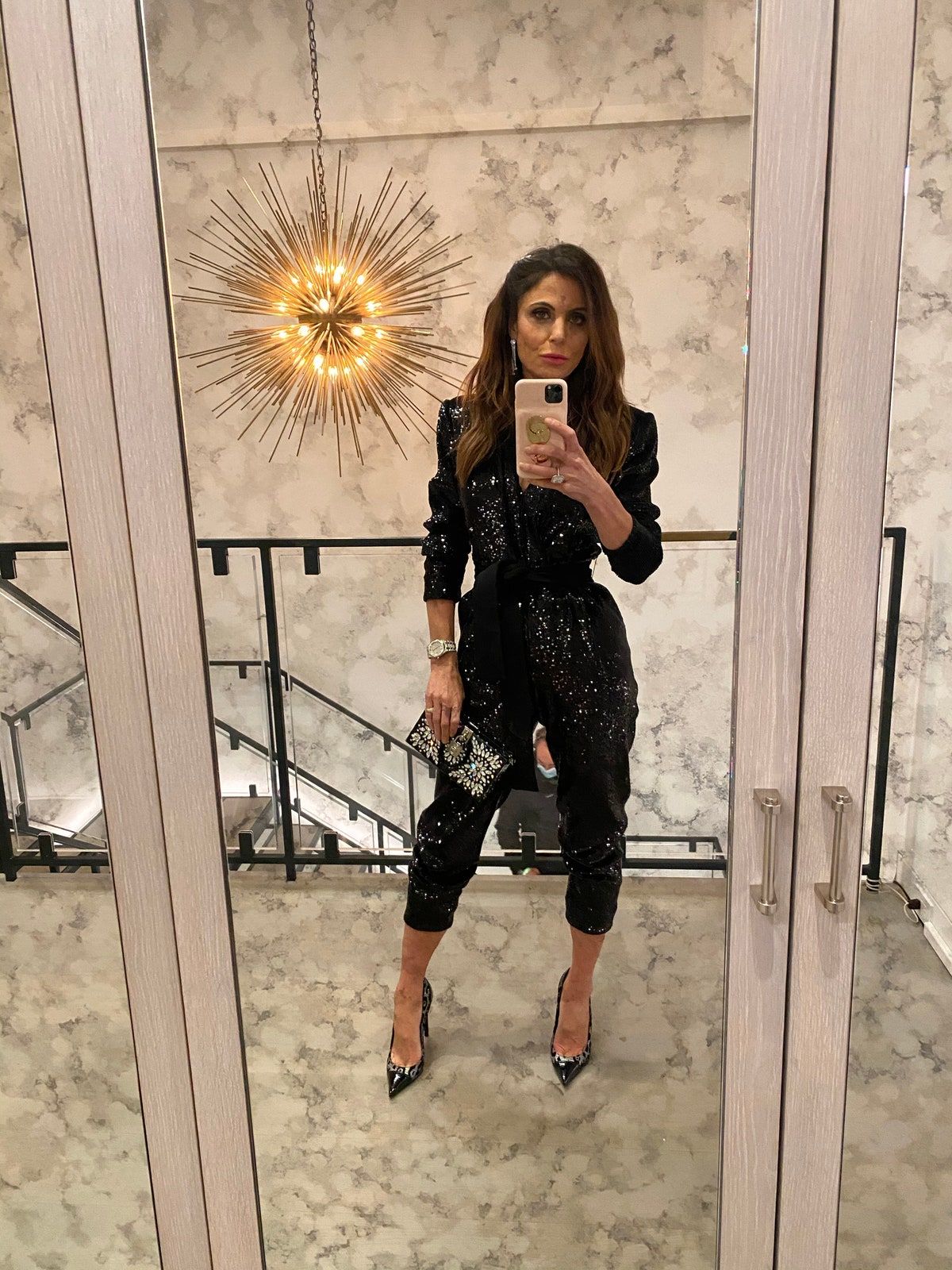