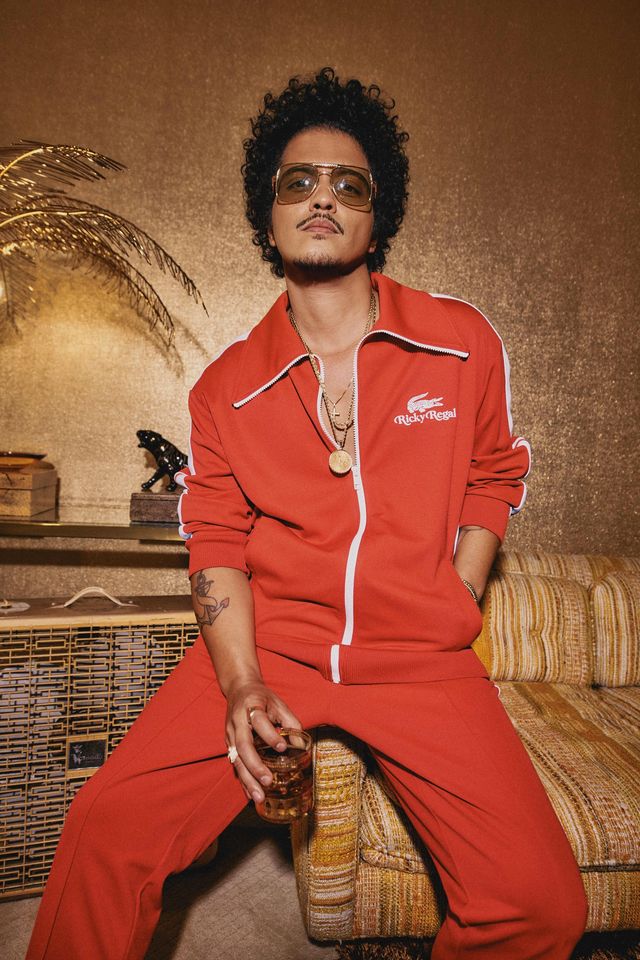 Bruno Mars-who once famously sang, “Got Chucks on with Saint Laurent”-says fashion brands have been knocking on his door to collaborate for years.

But it’s Lacoste creative director Louise Trotter who finally broke him down and sealed the deal. “Louise called me and begged me,” jokes Mars, adding that he was actually a big fan of Lacoste growing up. “Going to school, if you had that crocodile on your chest, that meant something,” he says. When Lacoste said Mars could design whatever he wanted, he was instantly on board. His new line debuts March 5.

When the singer sat down to actually work on the collaboration about a year ago, Mars began adopting an alter ego to help him think like a designer. He dreamed up Ricky Regal, an extremely fashion-forward man with an eye for design. The line, titled Lacoste x Ricky Regal, now serves as a representation of what Mars thinks this elevated version of himself would wear. “It’s been great to get to know both Bruno and Ricky; I don’t know who I know better actually,” says Trotter, while Mars adds, “I wanted it to feel like, whoever that person is wearing it, they’re the coolest guy at the party. They’re not trying too hard. It just flows and feels right.” 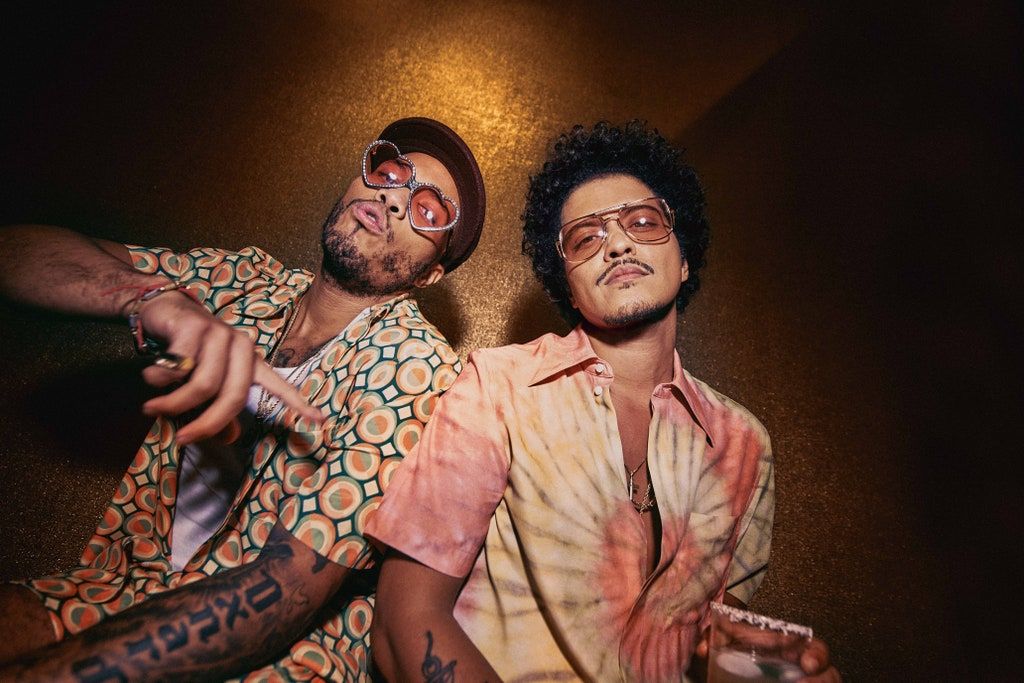 Mars recalls beginning the design process. He got the Lacoste creative team together for a formal PowerPoint presentation. “I couldn’t find a laser pointer, so I used a drumstick and pointed to the different colors and shapes [that I wanted to use],” he says. “At the end of the PowerPoint there was a picture of a big explosion with the caption ‘World domination.’” 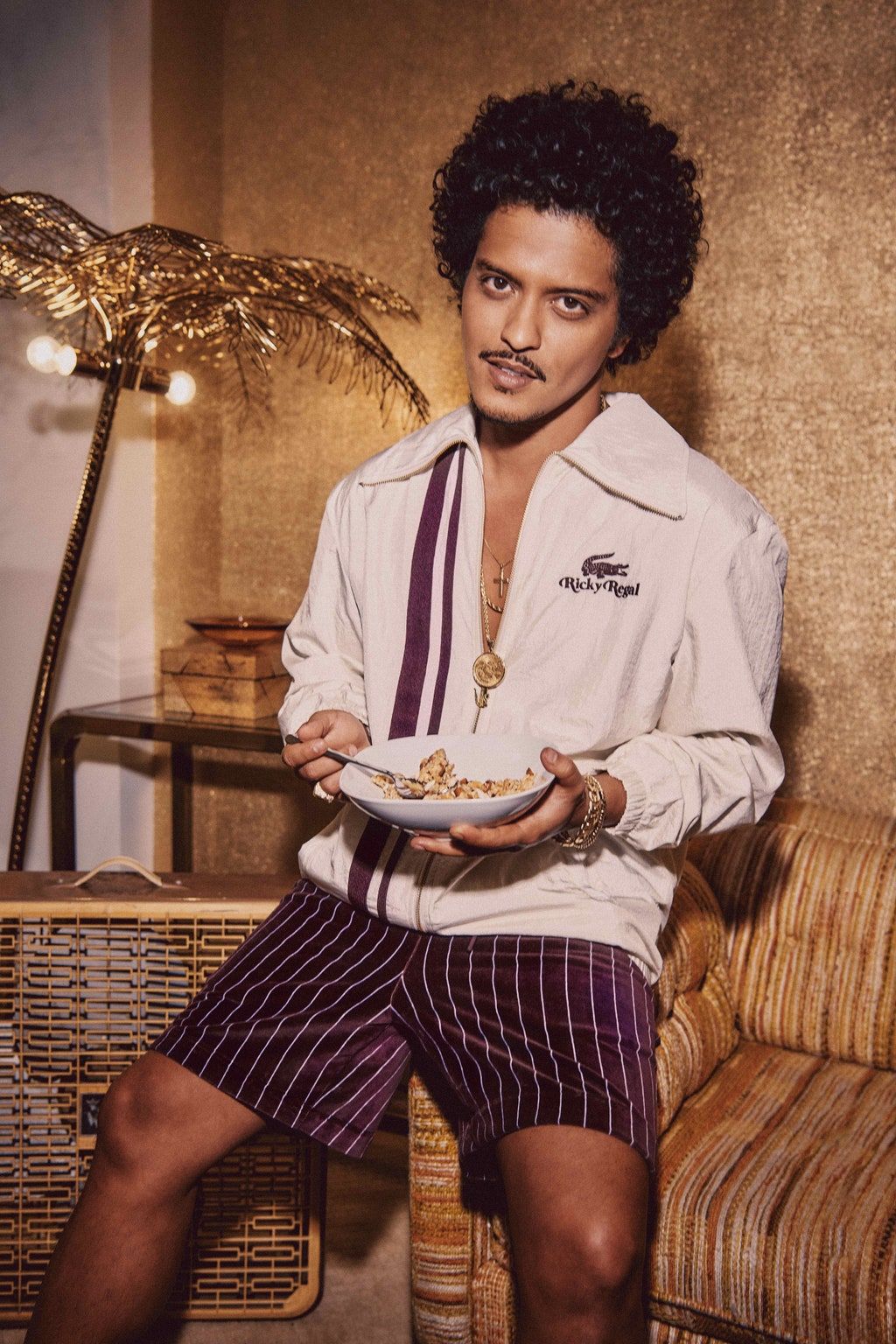 That resulted in a collection of ready-to-wear, footwear, and accessories that nods to the ’70s but has a decidedly more dressy, modern feel. Of course, it being Lacoste, there’s a heavy dose of sportswear influences too, including striped tracksuits and groovy camp-collar shirts with exaggerated collars. “I wanted collars down to my elbows,” says Mars. “There’s something magnificent and powerful about a collar being big. It gives confidence to whomever’s wearing it; it feels like a cape.” Lacoste’s classic tees and polo shirts, bearing the iconic crocodile logo, are also present. “The crocodile brought a sense of sport heritage to it,” says Trotter. Prices range from $90 for tees to $280 for the patterned zip-up jackets. 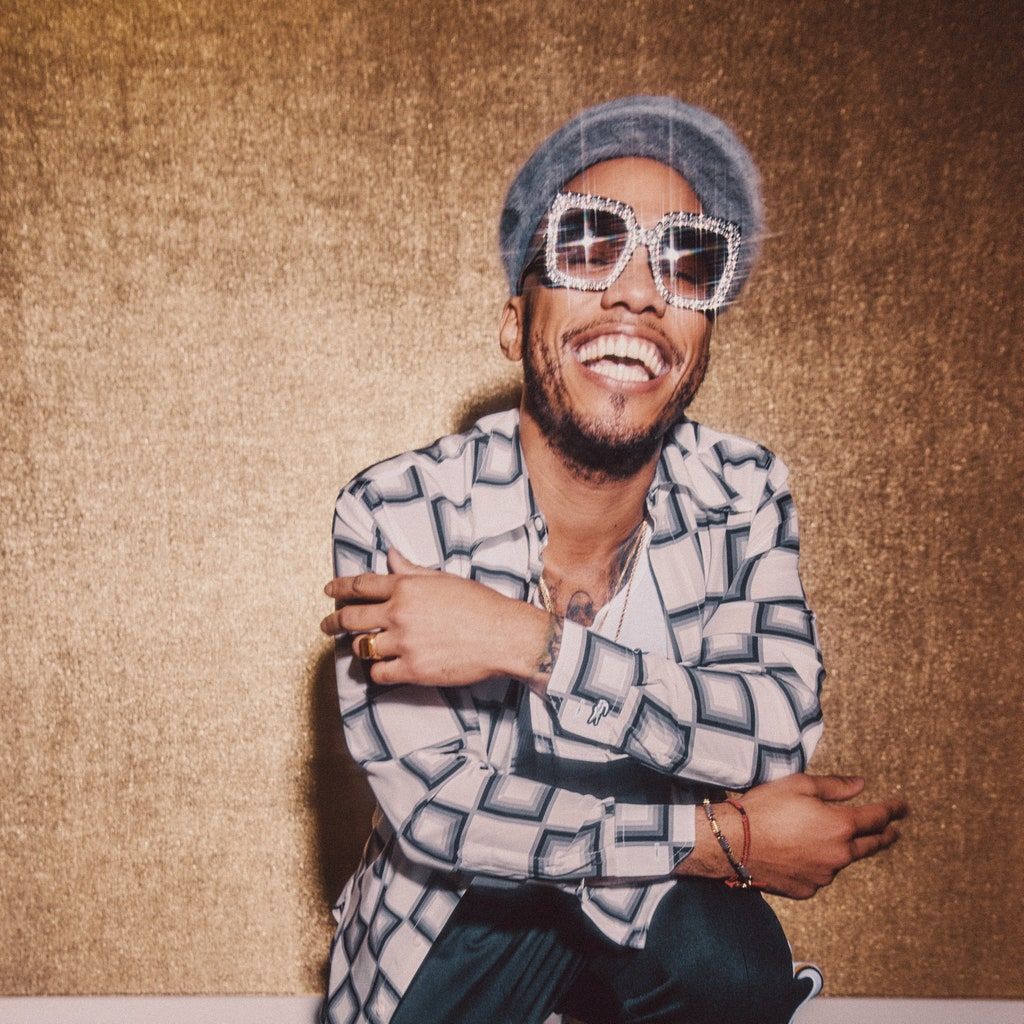 Given that this was Mars’s first time designing, Trotter says she was overall surprised by his knowledge of fit and eye for details. “I’d sometimes have my husband take our children for ice cream, so they didn’t see [Bruno] on the screen and tell all their friends,” she recalls. “Bruno is obsessive. He had a clear vision, and he knew instinctively if something wasn’t right.”

In the campaign Mars can be seen wearing the ’70s-inspired pieces along with sleazy-chic items like aviator sunglasses, which he also designed. Mars enlisted friend and singer-songwriter Anderson Paak to model along with him. “He and I have been quietly working on a project together,” Mars teases on the music front.

In fact Mars found that the design process wasn’t all that different from writing music. “When I’m writing a song, it’s about the emotion: What do I want people to feel?” he says. “I approach clothing that same way: How do I want to feel when I put on that jacket?” He wants people to experience life as Ricky Regal-like they’re “levitating when they walk into someplace-a grocery store or a party.”