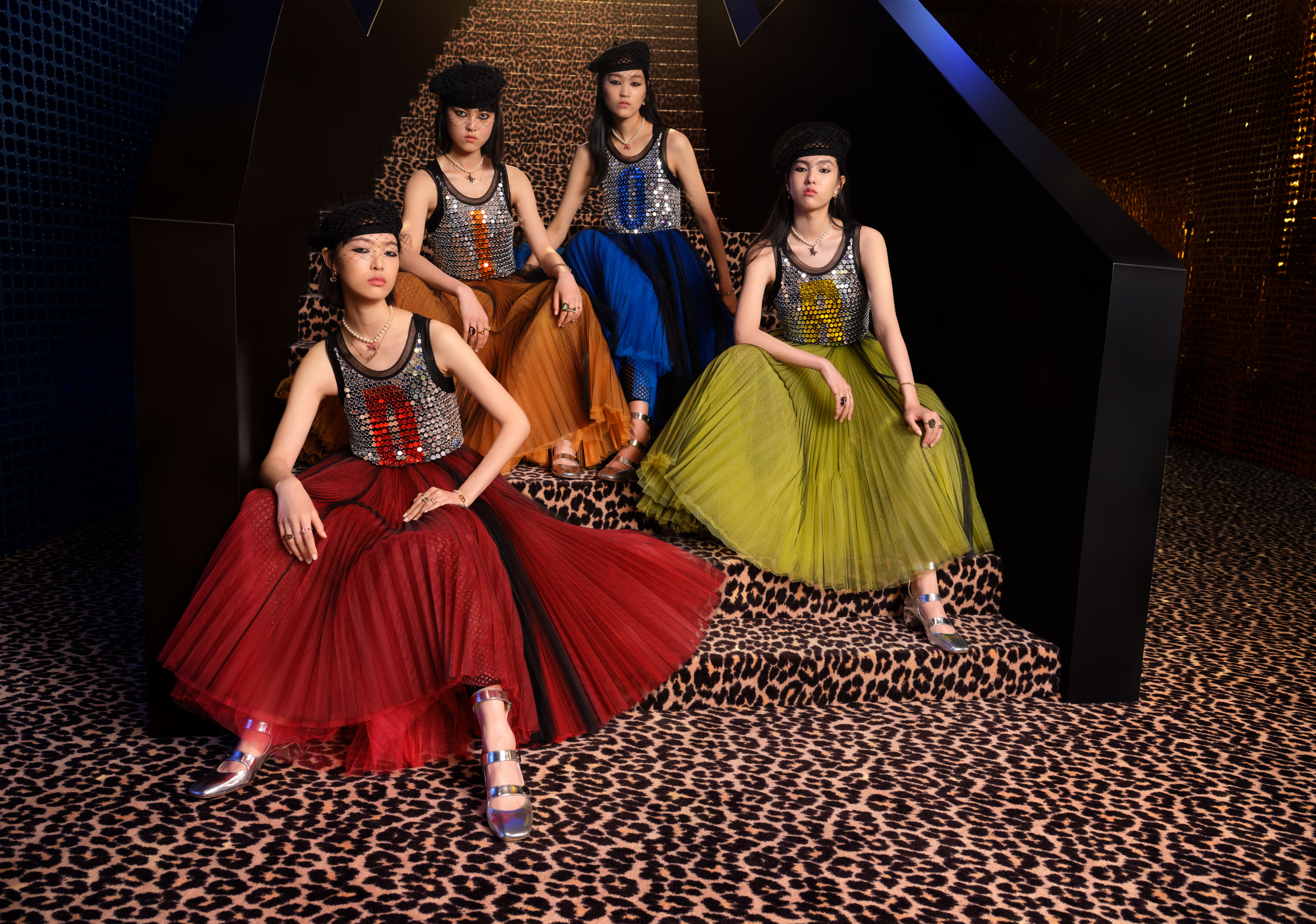 The first "real" show of the season was organized by the House of Dior for Shanghai Fashion Week. Maria Grazia Chiuri showed the brand's Pre-Fall 2021 collection, presented only via lookbook in December 2020. The decision to call Elio Fiorucci, the former art director of the Fiorucci store in New York, to shoot the collection had a lot to do with the inspiration of the season: totally pop. Inspired by the life of Andy Warhol and his friends like Fiorucci and Edie Sedgwick, the collection encourages carefree joy and fun and giving in to those inner desires to dance after such an emotional year. On the catwalks of China's fashion capital, the models paraded down to the tune of Donna Summer's "I Feel Love," and there could be no better soundtrack.

"It's not something I've done often in my career. But I felt the need to work in something completely different," explained Chiuri. "It was very nice for me to go back to my first memory of fashion, when I was young and went to the Fiorucci store, to find the same energy, the same love, the same surprise."

Chiuri explained that she was inspired by Andy Warhol's Pop Art reworking of Renaissance paintings. "My idea was to work on Dior with the same attitude because I think Pop gives this idea of freedom, of happiness, which I think is so important in this moment when we're just a little bit depressed," she said. Hence the psychedelic floral motif on a black velvet top and bright updates on the House of Dior's traditional codes: a checked, silk version of the Bar jacket and Toile de Jouy chartreuse on a lace full skirt. Using color in such a bold way is definitely a move of courage.

There's also significant use of metallic and animal prints. Although the leopard motif is not necessarily a direct synonym to the Dior style, a spotted trench coat was found in the archive, probably a tribute to the figure of Mitzah Bricard, the Maison's chief milliner, who venerated the leopard print and considered it part of her everyday look. It was a true fashion statement in the 1950s, but since then the animal motif has become a staple of pop culture, Chiuri found herself making the leap from a leopard-print trench coat in the Dior archives to Fiorucci. 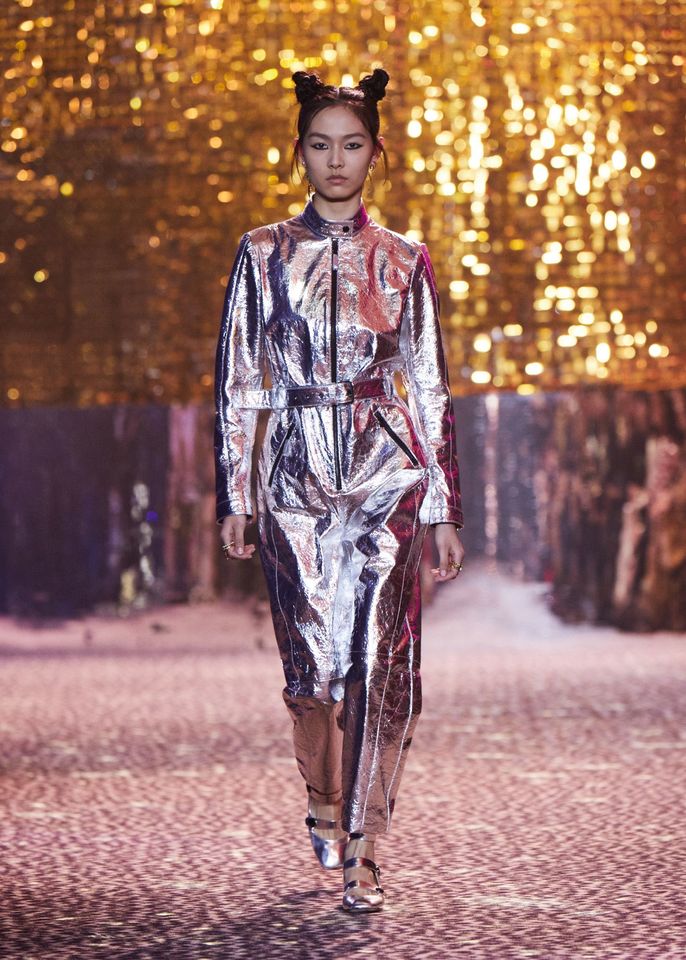 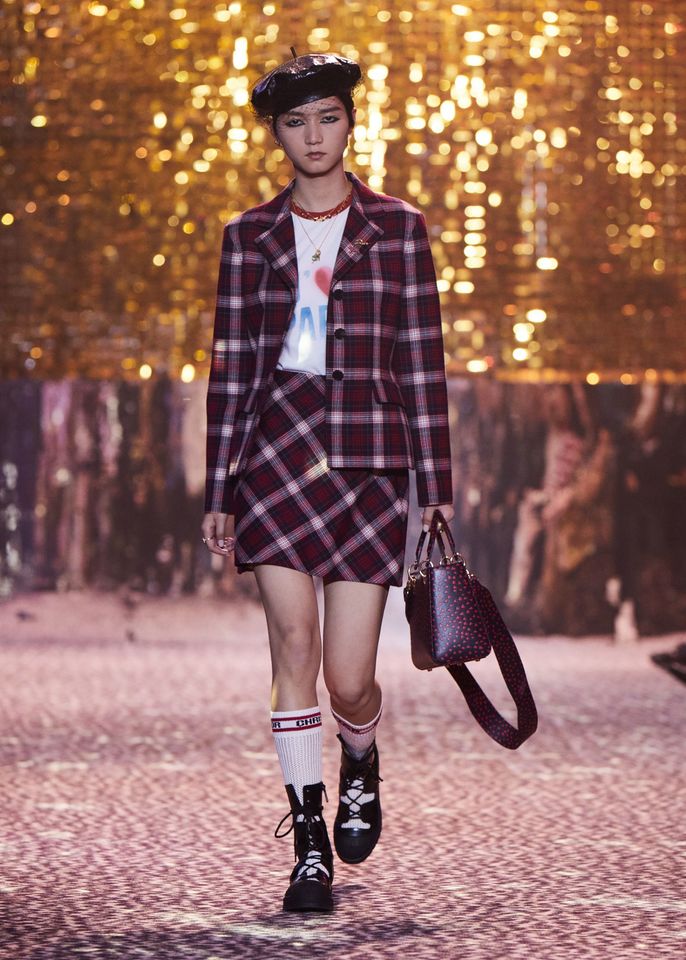 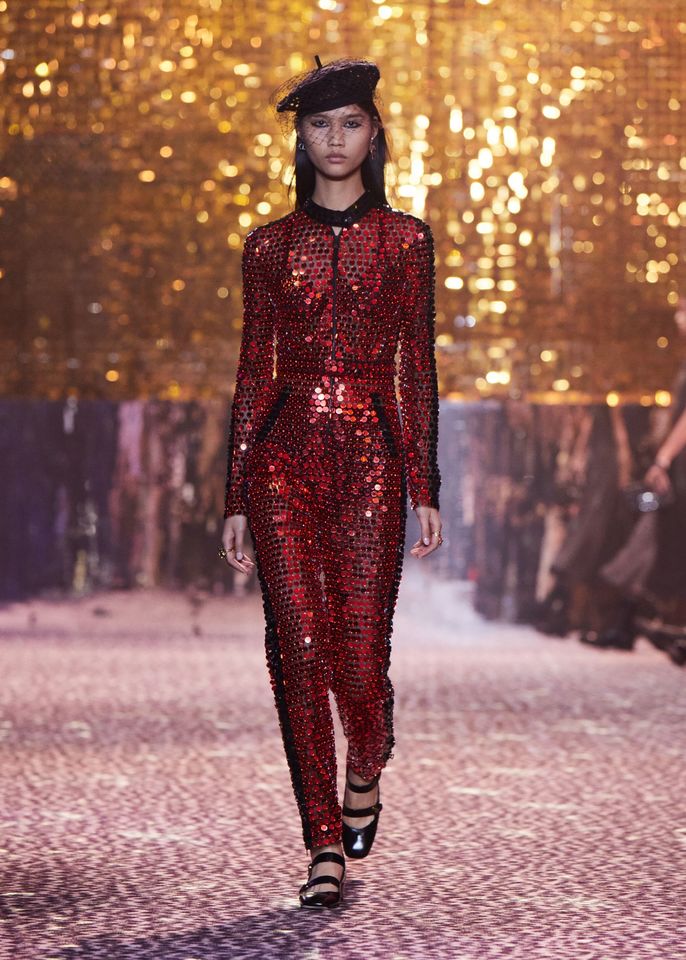 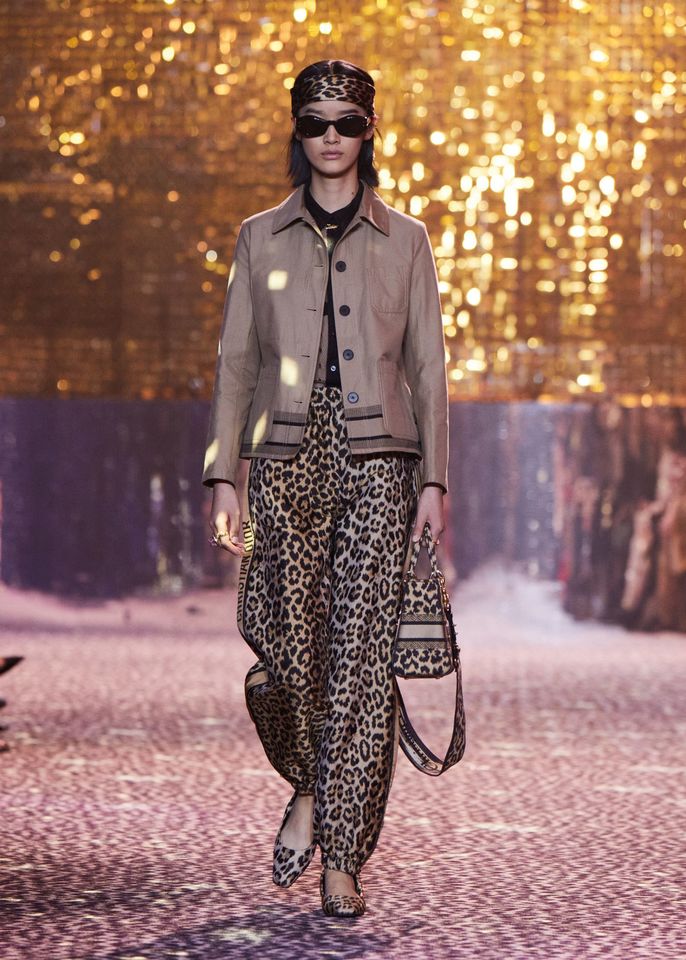 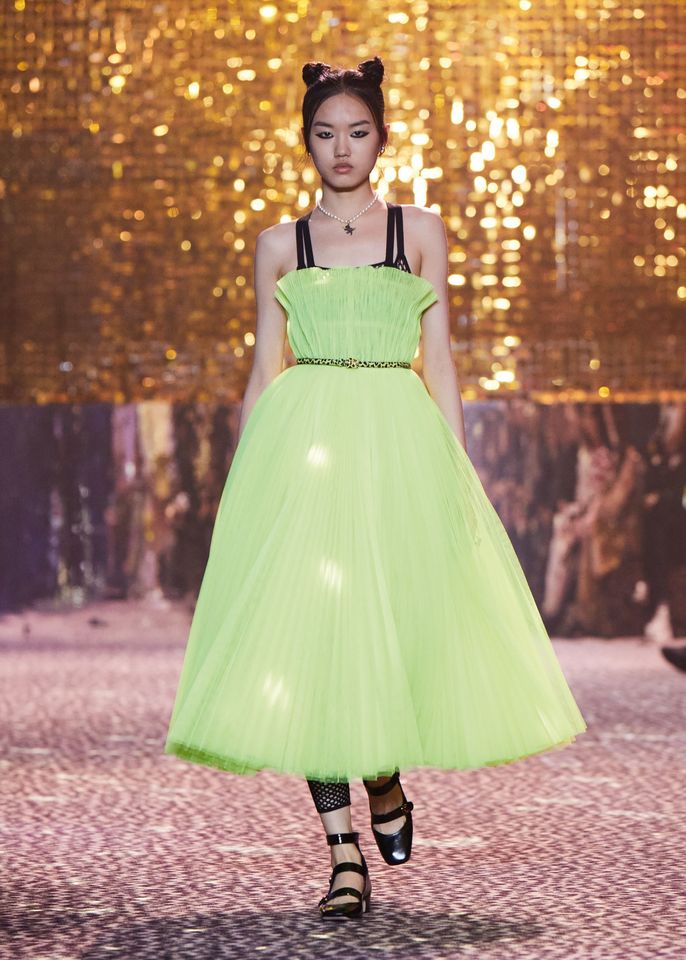 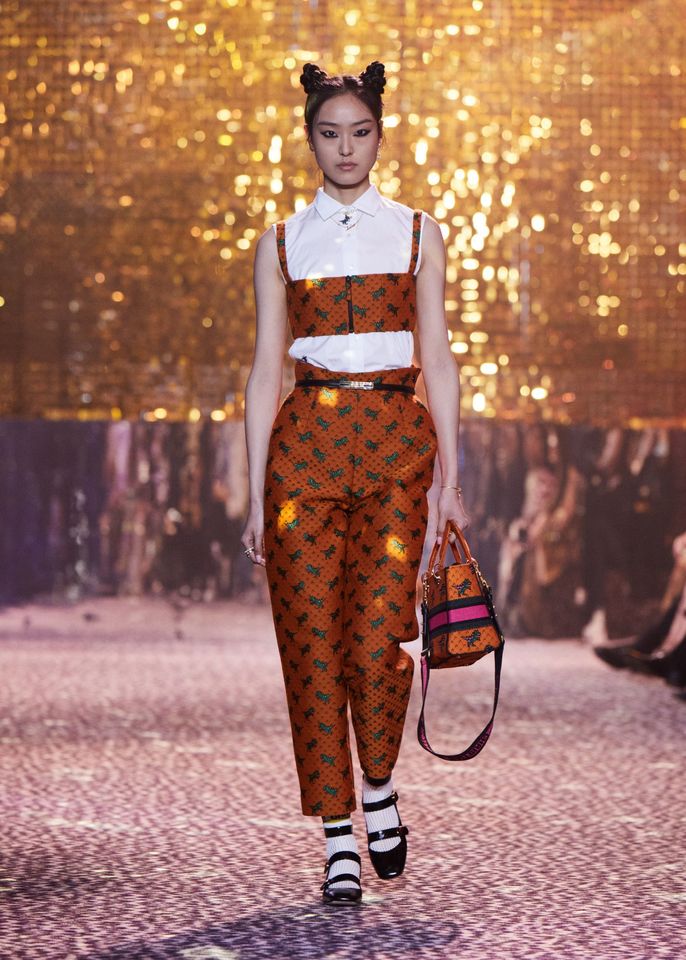 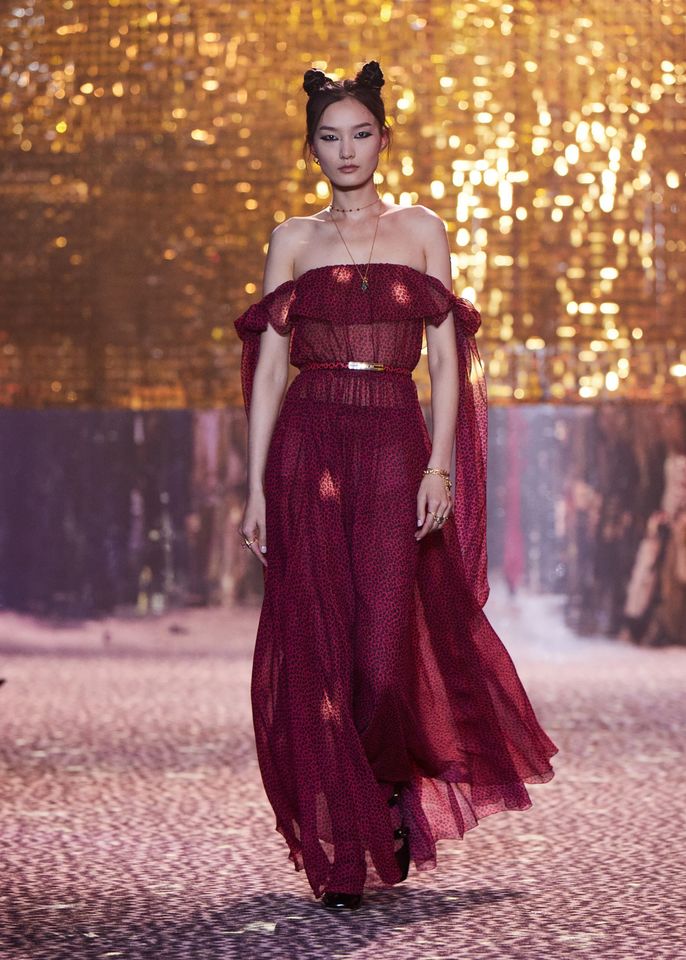 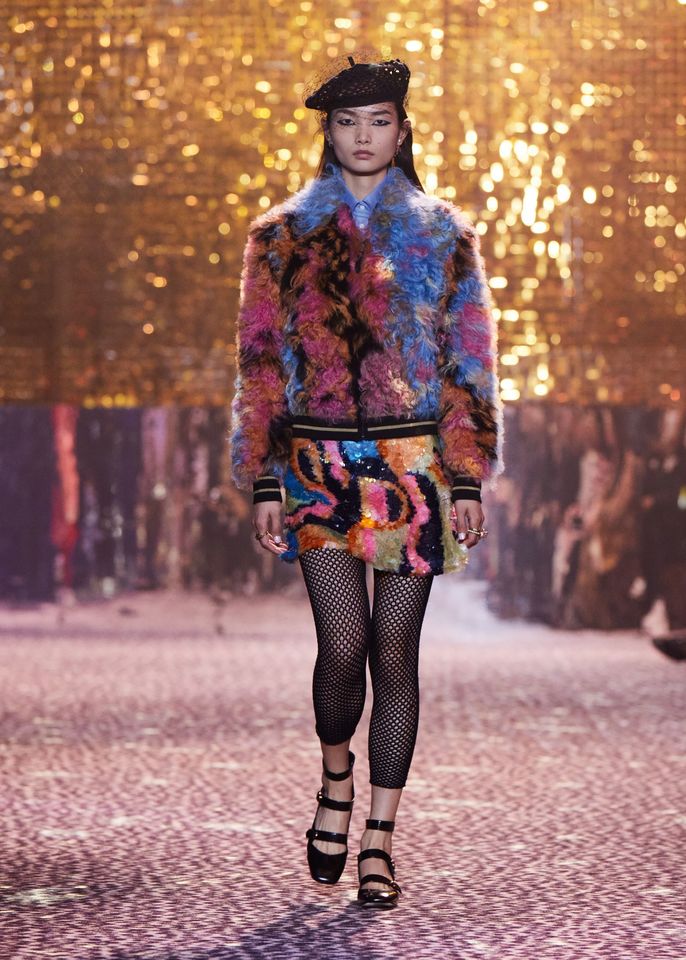 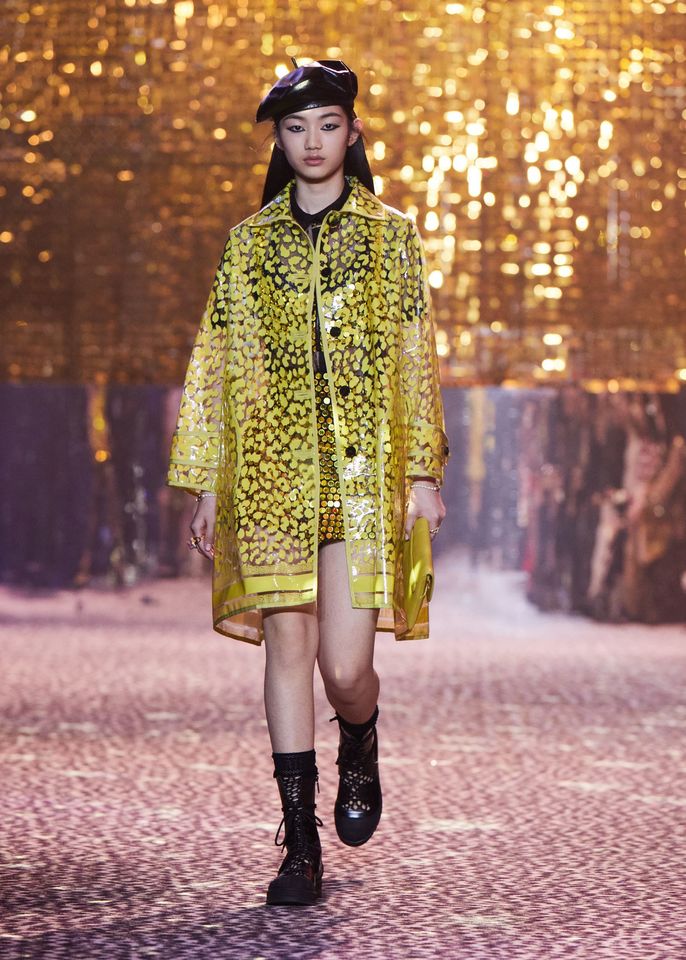 Chiuri took the chiné fabric technique of the original coat and modernized the leopard motif by transferring it to outerwear, including a transparent PVC raincoat, a quilted shirt, a fitted zip jacket, and even a pair of spotted ballet flats to wear under denim overalls.

As for the flagship looks, a jacket and skirt ensemble in dark blue sequins is paired over a fishnet jumpsuit. Patent leather jackets and shorts contrast against sequined tank tops and full circle skirts, especially those in tulle. From space-age silver suits and yellow hues to tie-dye and rainbow pleats for dresses, there's no end of fantastical combinations in this collection to reignite the spark between fashion, art, and joy.

However, unlike her other collection, the feminist slogans give way to messages more related to the spirit of the moment: the front of certain pieces read "Christian Dior MMXX" and on the back "Together Apart."