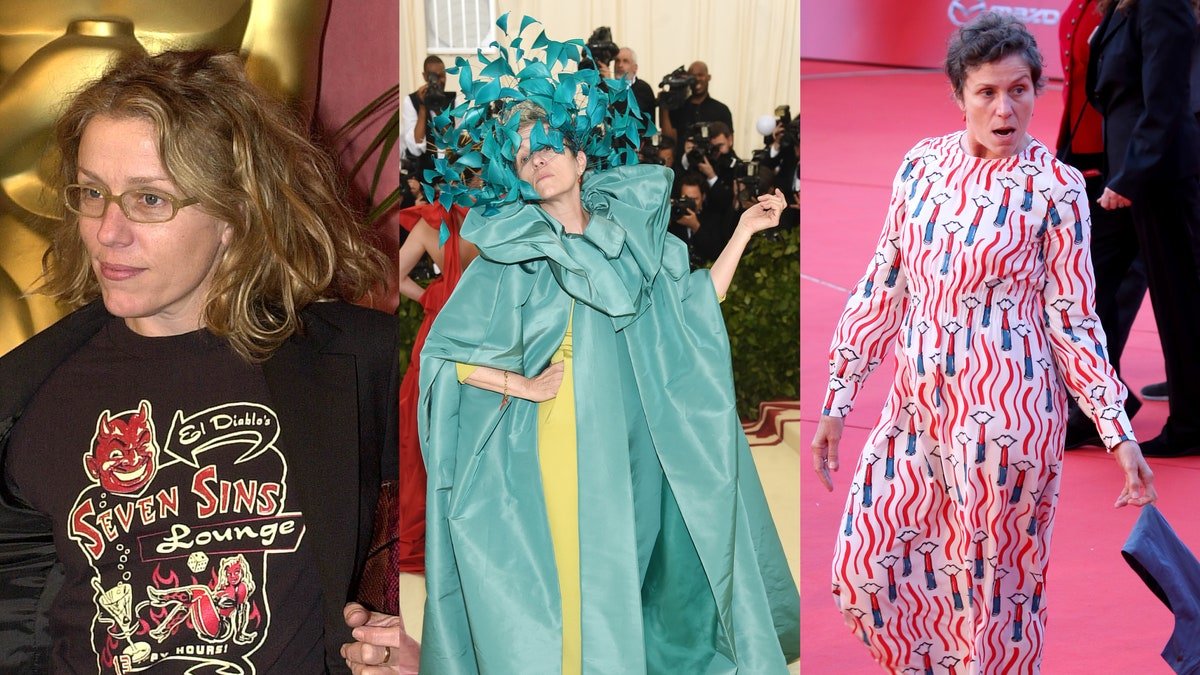 Frances McDormand lives life by her own rules. When it comes to fashion, the Oscar-winning actor, and one of Vogue’s four January cover stars, consistently attends red carpet events in looks that are 100% her.

As an awards ceremony veteran-she’s one of the most consistently nominated actors in Hollywood-you’ll never find her succumbing to the latest trend or designers of the moment. Instead, McDormand has more of an authentic, IDGAF energy surrounding her style choices. It’s incredibly refreshing. Over the years, she’s served up a number of rule-breaking moments that prove fashion is here to have fun with and not to be taken too seriously.

For starters, the 63-year-old has a history of eschewing the standard gown-and-stilettos pairing that many A-list actors follow suit at awards shows. Her ensembles often lean casual, but when she does dress up, it’s full of whimsy and kitsch. She’s very much anti-heels on the red carpet, but still folds in designer labels. Last year, in fact, McDormand stepped out on two carpet occasions wearing bold, printed Valentino gowns, with the Valentino x Birkenstock sandals to match-proving that comfort can be chic in the process.

But her fashion irreverence is not about the clothes or accessories alone. McDormand also hits the step-and-repeats with a full-on kooky energy, too, hamming it up for photographers with campy poses. Never one to merely walk a red carpet, instead she storms it for full camp-effect. She knows how to play the Hollywood game, but McDormand is always in full control of her narrative as a red carpet rebel, and it’s a spirit that’s only gotten better throughout the years. 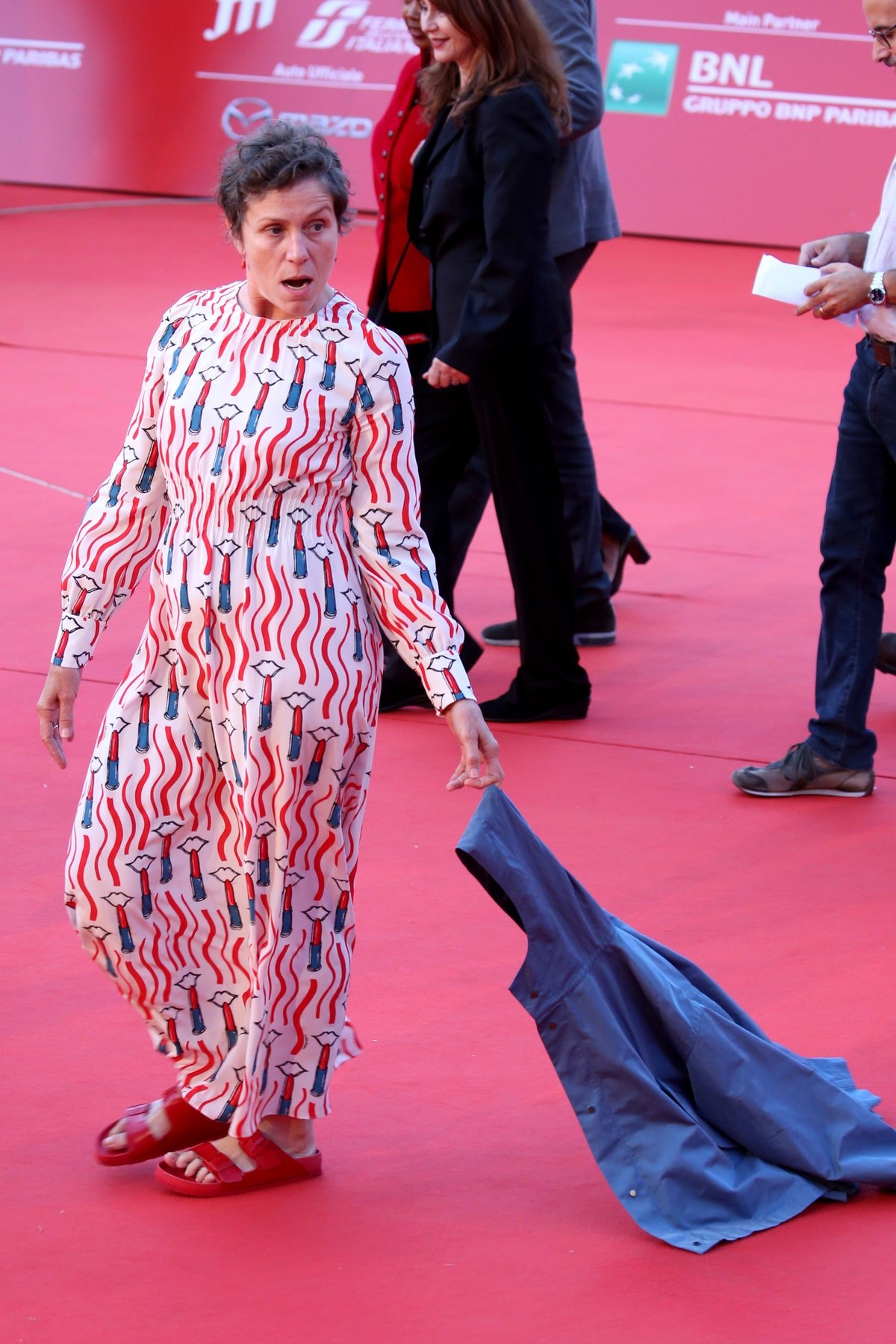 Why do heels when you can do Birks? At the Rome Film Festival in 2019, McDormand stormed the red carpet in a Valentino gown with red Valentino x Birkenstock sandals to match-proving comfort can indeed be chic. Two time’s a charm! McDormand wore her favorite Valentino x Birkenstock flats yet again, at the 2019 Oscars. This time, she paired a red Valentino gown with chartreuse sandals for a power clash. 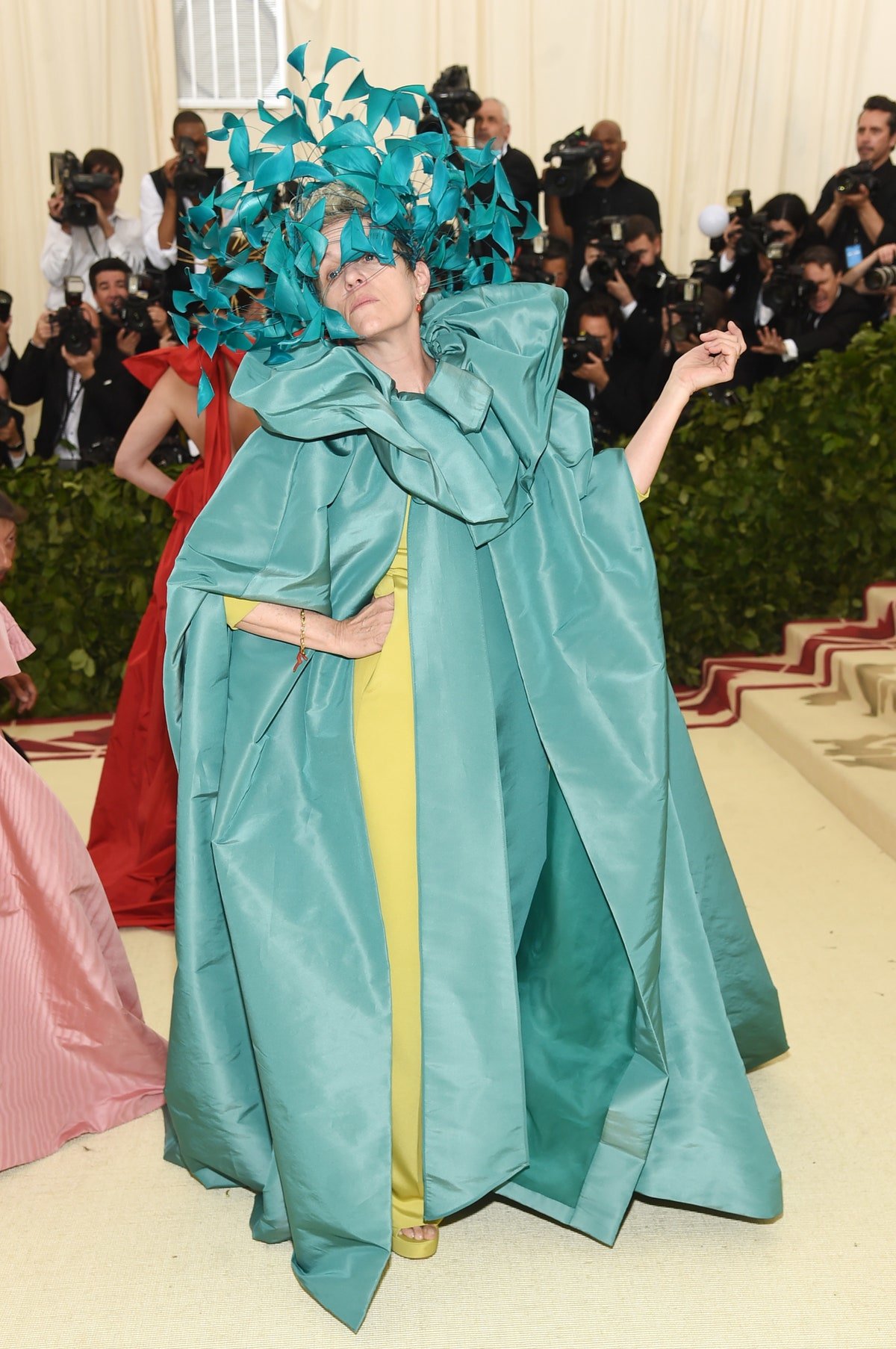 At the 2018 Met Gala, which was themed “Heavenly Bodies,” McDormand wore a face-concealing headpiece, pairing it with her dramatic Valentino cape. 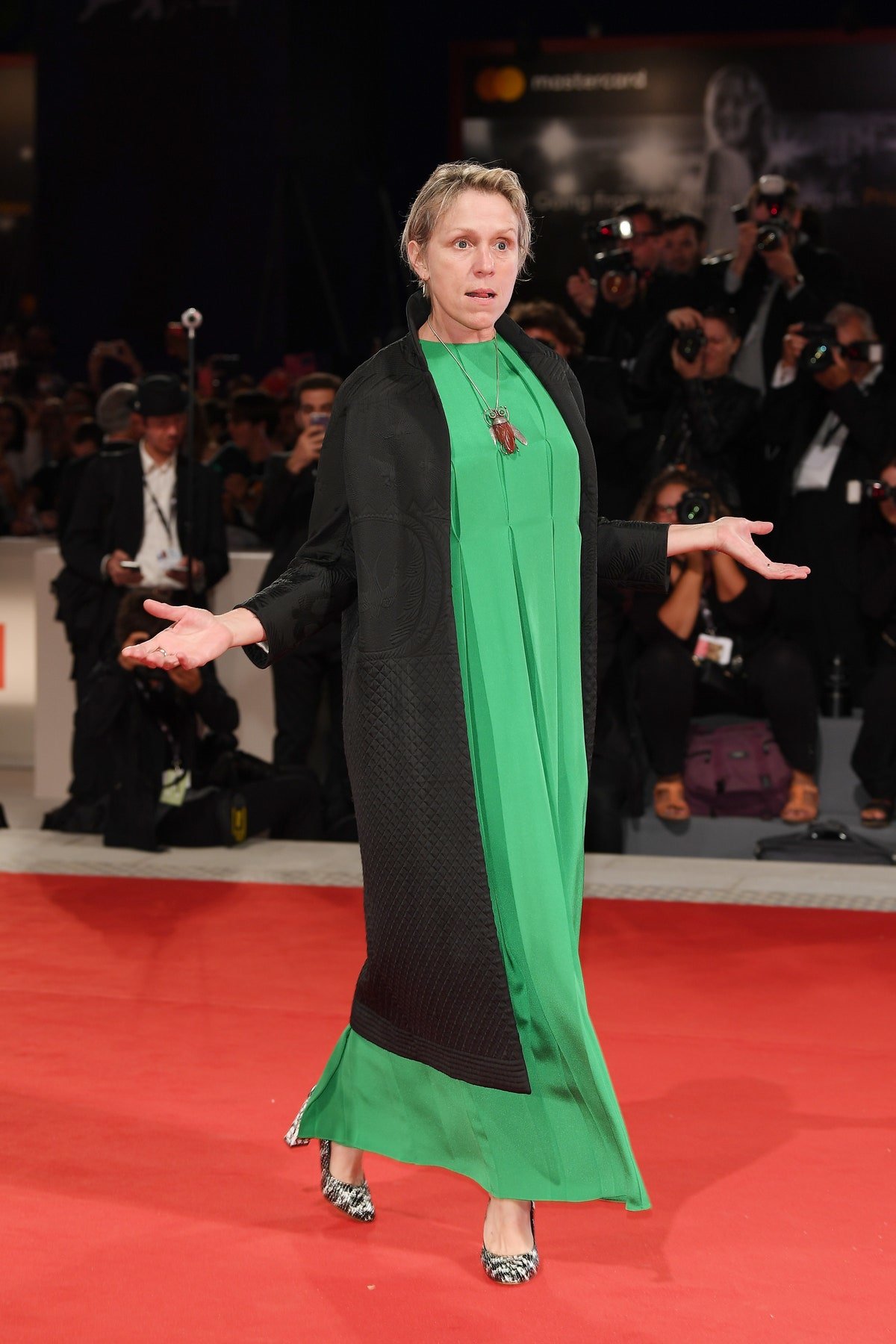 At a 2017 screening of Three Billboards Outside Ebbing, Missouri in Venice, McDormand traipsed around the step-and-repeat serving us dramatic (and bewildered) expressions. Groovy, baby! For a screening of Three Billboards Outside Ebbing, Missouri in Venice in 2017, McDormand rocked a denim button-up and wide-leg jeans with platform sandals. 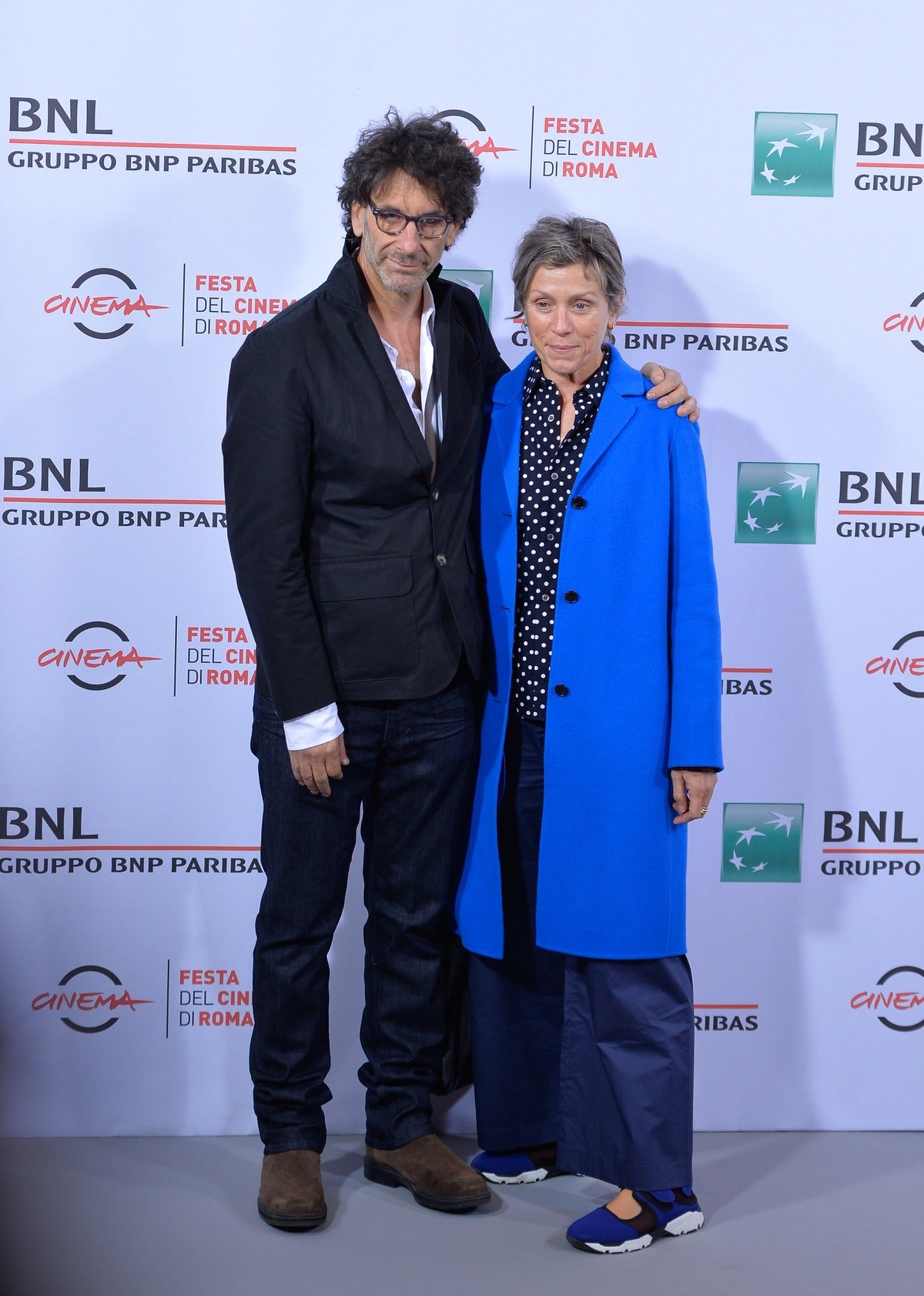 Her sneaker game? Strong. McDormand is apparently anti-heels, and at Rome’s Festa del Cinema in 2015, she took to the red carpet in a pair of chunky Marni sneakers, pairing them with a cobalt blue coat, printed shirt, and trousers. A premiere gown is safe, sure, but McDormand proved an overcoat, sweater, and jeans can look just as good at the debut of Laurel Canyon in New York in the early aughts. 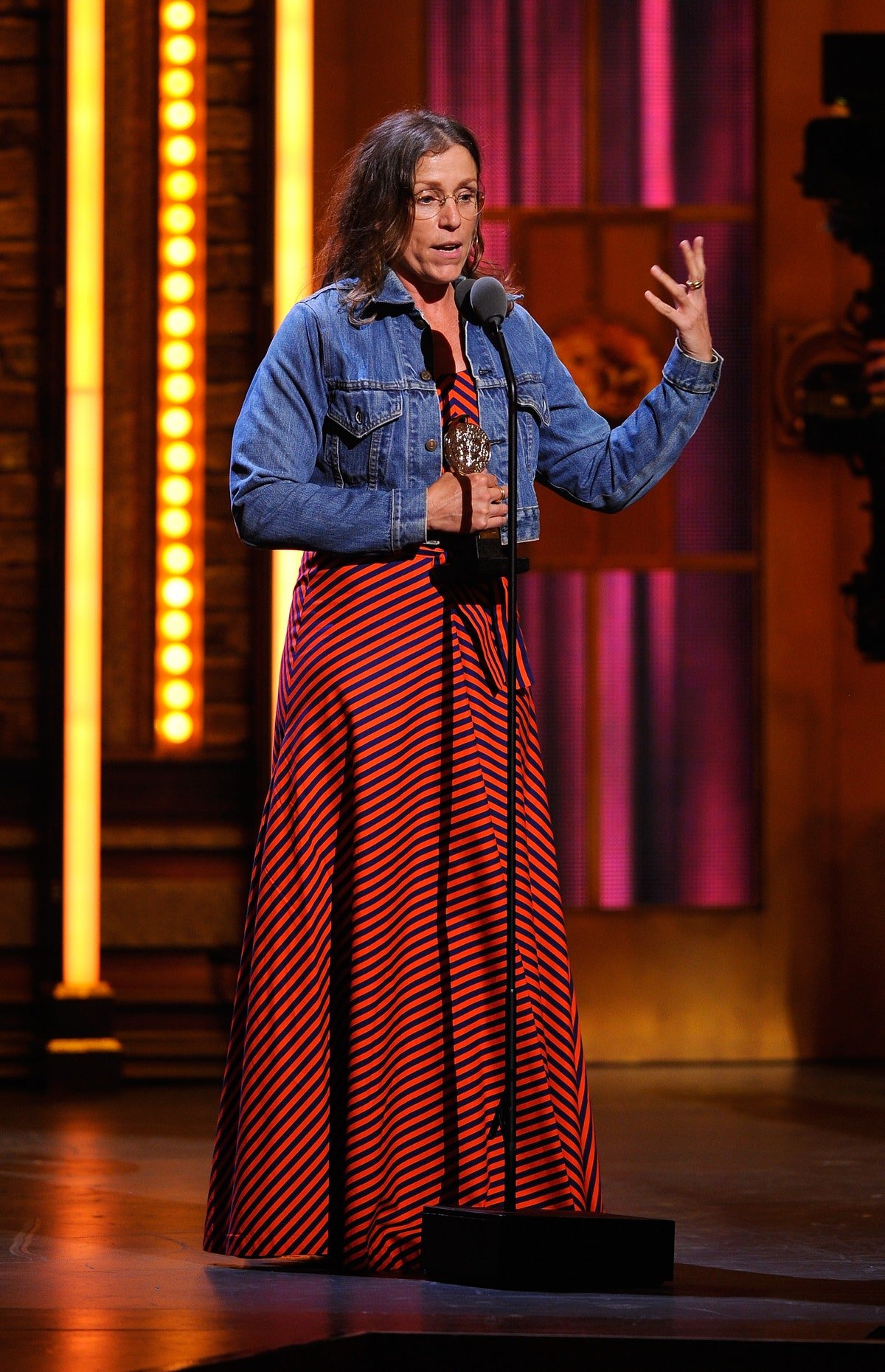 The Tony Awards are all about glitz and glam. But in 2011, McDormand accepted her award for best performance by an actress in a leading role in a play wearing a decidedly more dressed-down ensemble: a cropped denim jacket and striped maxidress. At the Vanity Fair Oscars Party in 2001, McDormand ignored the sea of sequined gowns and, instead, opted for a fully covered white coat gown with an evening brooch. Sometimes, less is clearly way more. 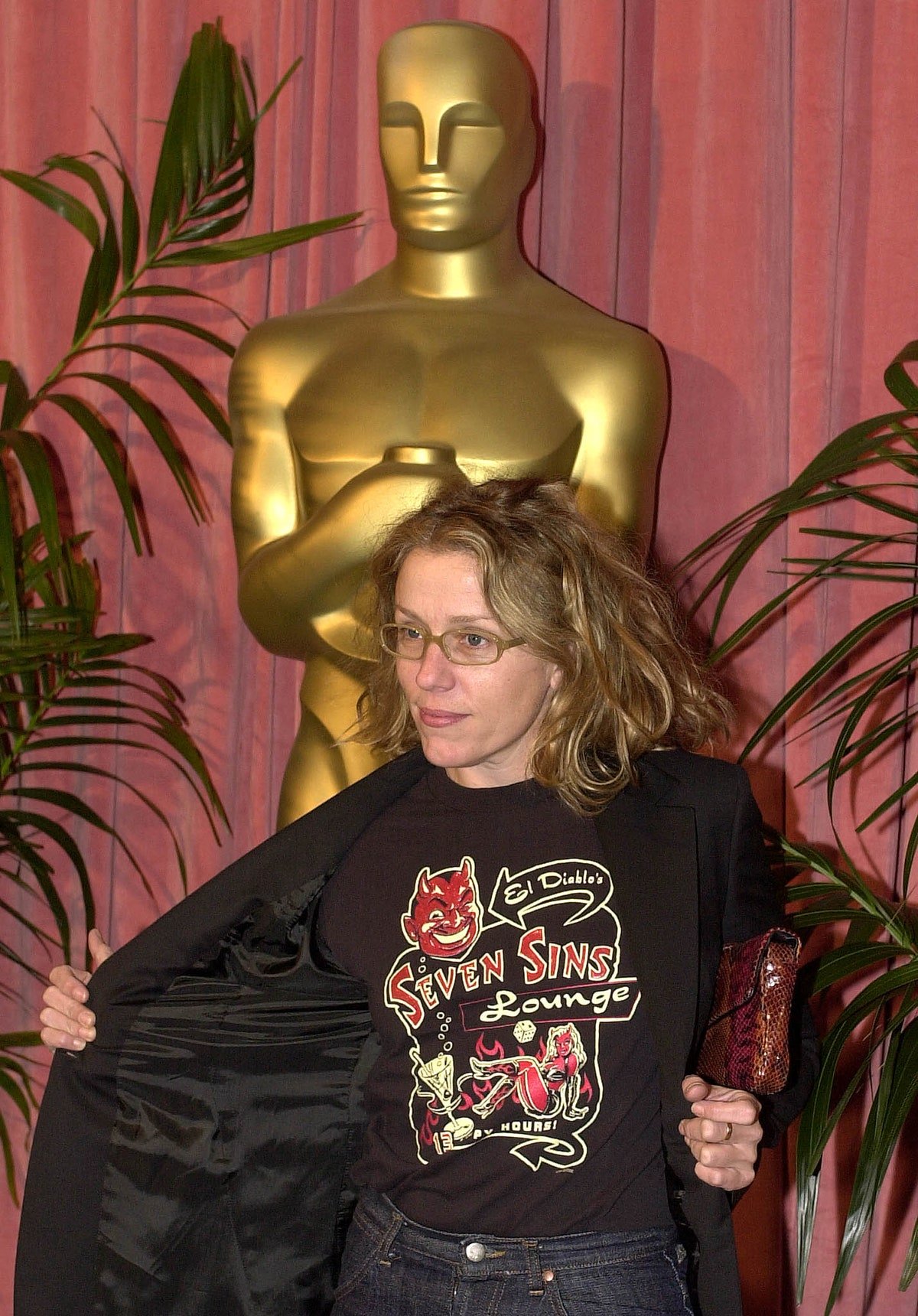 At an Oscars luncheon in 2001, McDormand once again left her gown at home and flashed her graphic tee in front of the famous gold statue. The top read, “El Diablo’s Seven Sins Lounge.” 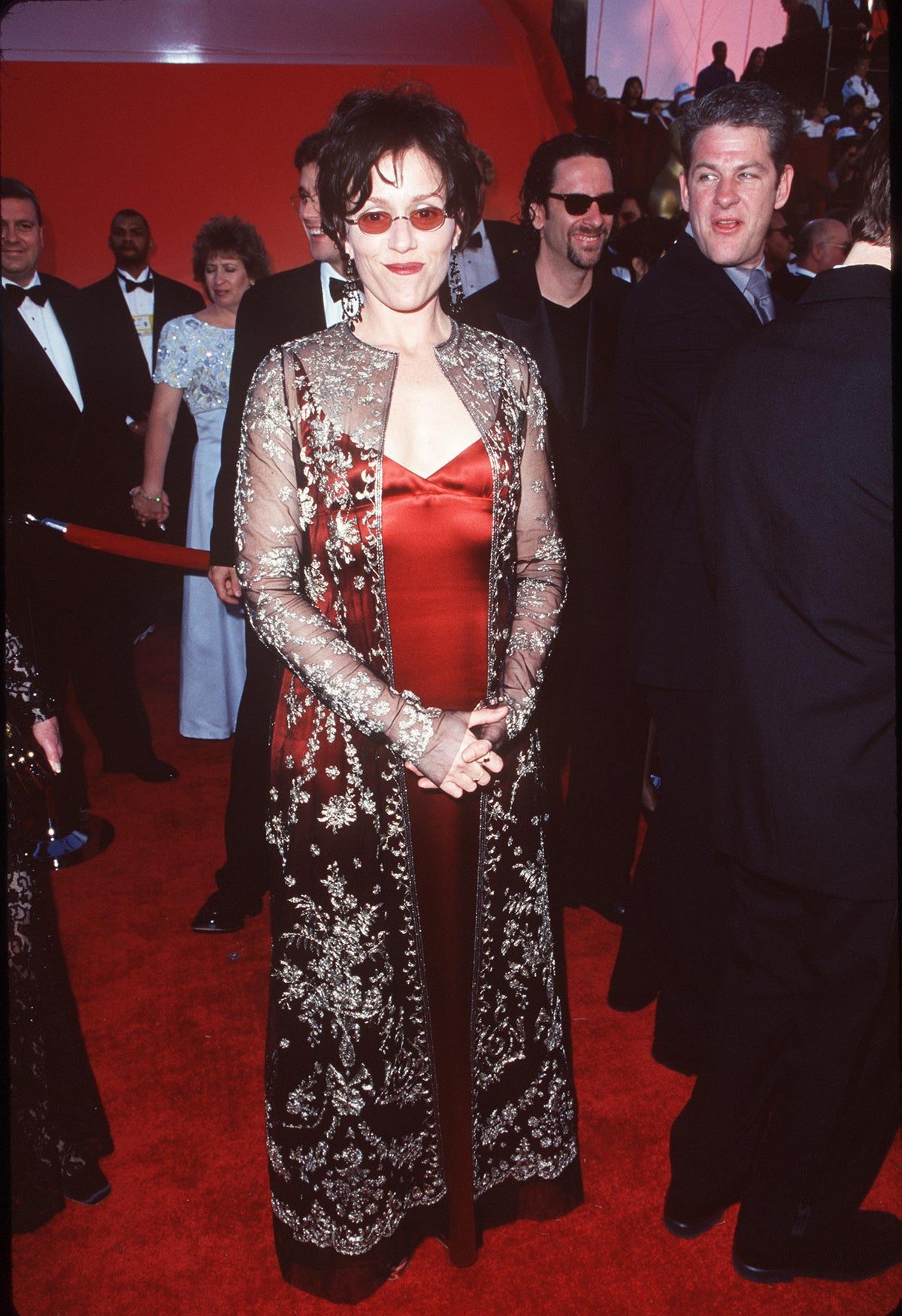 When heading to the Oscars, it’s important to remember your tiny tinted shades! McDormand paired hers with a red slip dress and embroidered mesh caftan to the 1998 Academy Awards.