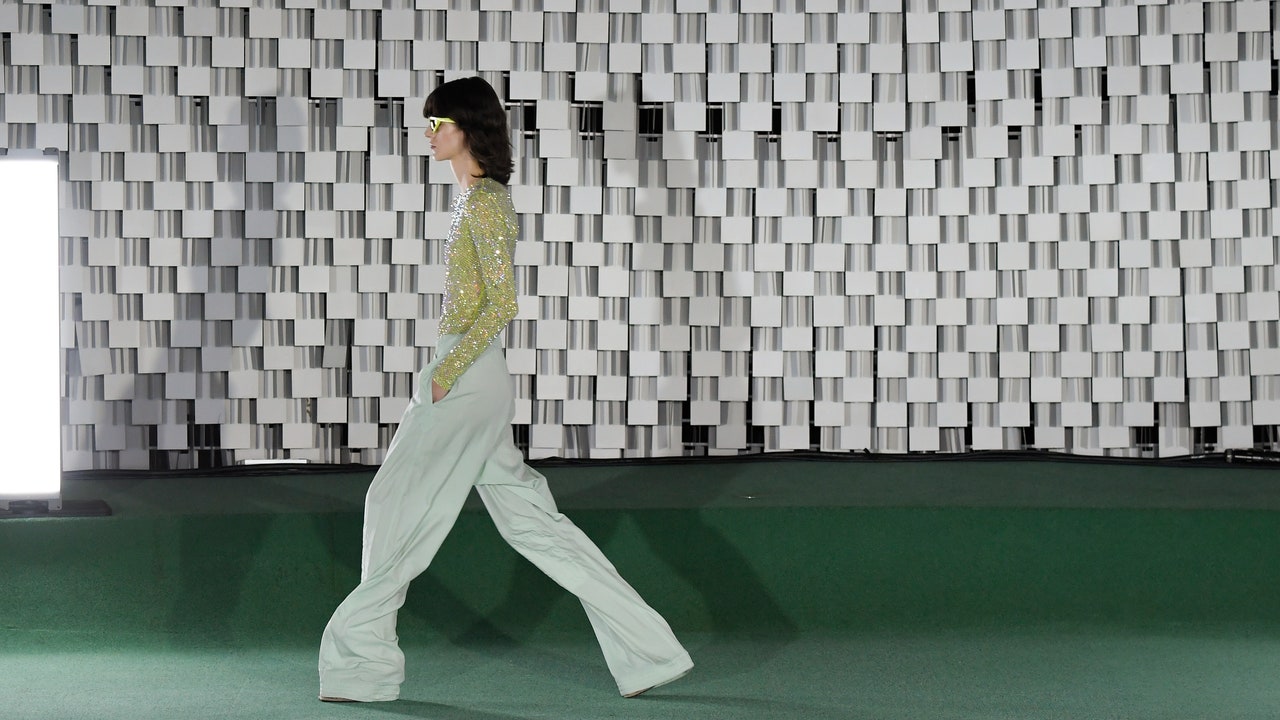 After 18 months of ambitious sustainability conversations in the fashion industry, the issue was overshadowed by the excitement and spectacle of the spring 2022 shows. Who is actually making progress?

This time last year, we were calling the spring 2021 season a turning point in fashion’s sustainability movement. Everyone had big ambitions about producing less, using what exists, and designing clothes to last: Francesco Risso was upcycling old pieces into new ones; Gabriela Hearst and Stella McCartney used up their leftover fabrics; Balenciaga’s Demna Gvasalia sharply increased his use of organic cotton and recycled synthetics; Kenneth Ize and Colville partnered with artisan weavers in Nigeria and Mexico; and Collina Strada launched a “silk” made from rose petals. On our mid-pandemic Zooms, these were often the details designers got most excited about: Gvasalia recalled deconstructing and upcycling his own clothes during lockdown, telling Vogue’s Sarah Mower it helped him fall in love with fashion again. “There’s a need to revise things,” he said. “To start a new chapter.”

We expected spring 2022 to be another step forward, a glimpse of fashion’s earth-friendly future after 18 months of lockdowns and climate disasters. Often, though, the general feeling was that brands were more focused on the media impact of their shows than the environmental impact of their collections. “Remember sustainability?” a colleague laughed at New York Fashion Week. After a year-and-a-half of lofty conversations around the subject, its absence felt abrupt, if not troubling.

In truth, there was a lot vying for our attention this month. The sheer excitement of getting back to live shows was powerful, even if many of us experienced them virtually. These weren’t just regular shows, either: They were music festivals, TV premieres, and community gatherings, each transmitting good vibes IRL and on Instagram. Fashion’s big comeback seemed to demand a show that made an immediate, emotional impact, sometimes to the point where the clothes became secondary to the plot. When a show is no longer about the clothes, there isn’t much space to dive into the nitty-gritty of organic yarns and local manufacturing. 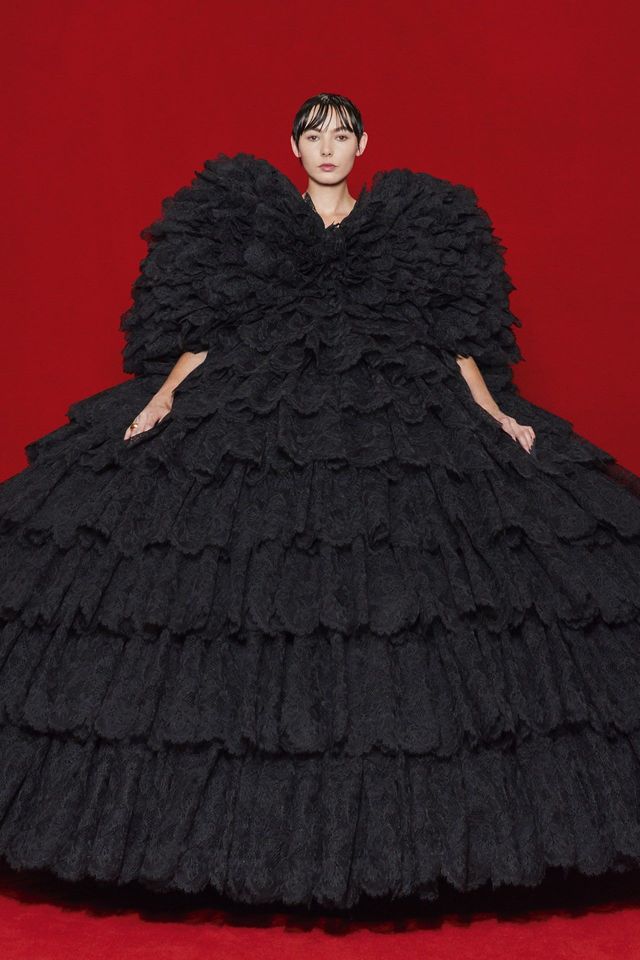 It might lead you to believe there wasn’t much sustainable progress at all this season, but that wasn’t the case. We found it in the studios and showrooms of designers like Maria Cornejo, who is investing in vertical production in Japan and Turkey to reduce her transportation footprint; Ashlynn Park, who employs zero-waste cutting techniques and works on a made-to-order model; and Rentrayage’s Erin Beatty, who exclusively transforms vintage garments or deadstock materials into new pieces. We saw these collections at low-key presentations and appointments, where there was plenty of time to drill into the nuances of sustainability and ruminate on the big questions facing our industry. Therein lies a big difference between this season and last: While we’re thrilled to be done with Zoom reviews, they did enable deeper conversations with designers large and small. That simply isn’t possible in the five minutes we get backstage at a show. 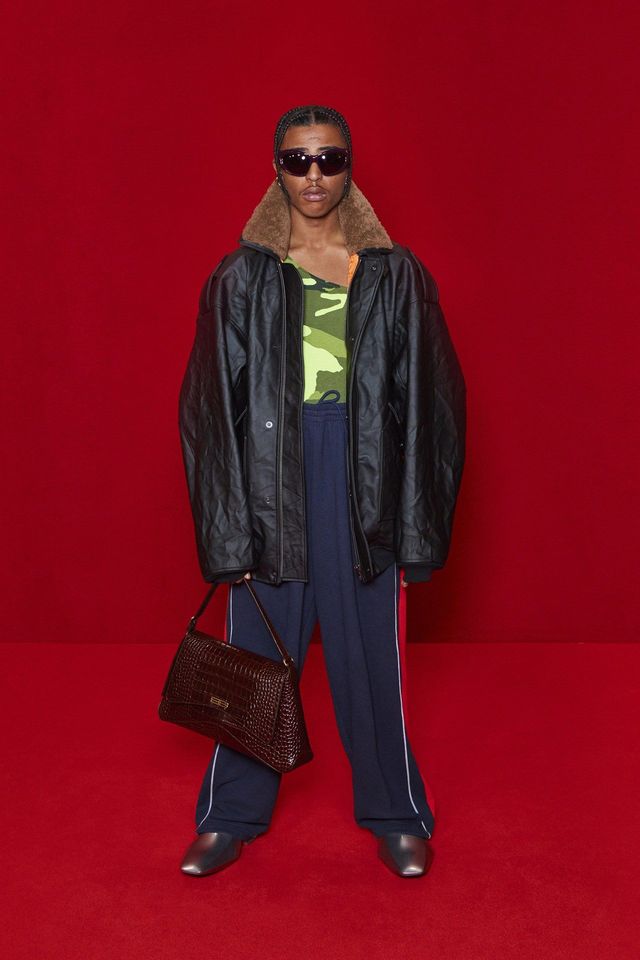 Still, some of the month’s big shows did move the needleขyou just had to look closely (and, in some cases, request more information from the brand). Balenciaga’s incredible “red carpet” and Simpsons episode aside, spring 2022 may have been Gvasalia’s most sustainable collection yet: 95% of the materials were “certified sustainable,” including organic cotton, recycled polyester and nylon, and upcycled leather and embroideries. The opening gown, an explosion of black lace, was a blend of 63% recycled nylon and 37% responsibly-sourced viscose, while the leather bomber in look 44 was made of a vegan alternative derived from cactus leaves. The extra-long loafer slippers everyone was Instagram’ing were actually a leather-like EVA.

Gvasalia’s spring 2021 collection boasted similar numbers, so perhaps the takeaway is that sustainability is becoming the norm, not the main story. Eventually, that will be the case everywhere. It’s also possible that designers understood the paradox of hosting a big, immersive show and promoting their sustainable fibers; no one wants to be accused of greenwashing these days. 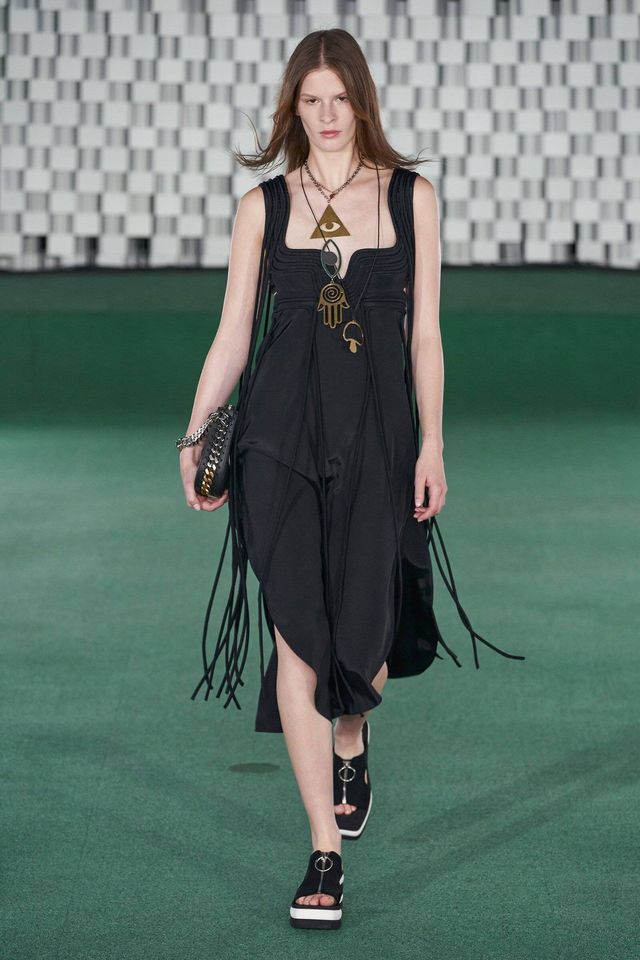 Some might argue that we shouldn’t expect a fashion show to do both: to feel emotional and transportive and make a statement about fashion’s role in climate change. (Oh, and connect with customers and drive sales, too.) Stella McCartney is among the few designers who can pull it off: Her show was equal parts modern, of-the-moment silhouettes and a lesson on mycelium, the root structure of mushrooms. Mycelium’s carbon-sequestering, regenerative powers inspired the fungi prints in the collection, and McCartney unveiled the industry’s first commercially-available bag in Mylo, a leather alternative grown from mycelium. (The collection also featured items in “forest-friendly” viscose, which is sourced from sustainably-managed ancient forests, and cupro, a byproduct of cotton harvests.) McCartney is speaking at COP26 in Glasgow next month to address fashion’s impact and, importantly, the need to engage with governments to regulate and support the industry’s efforts. 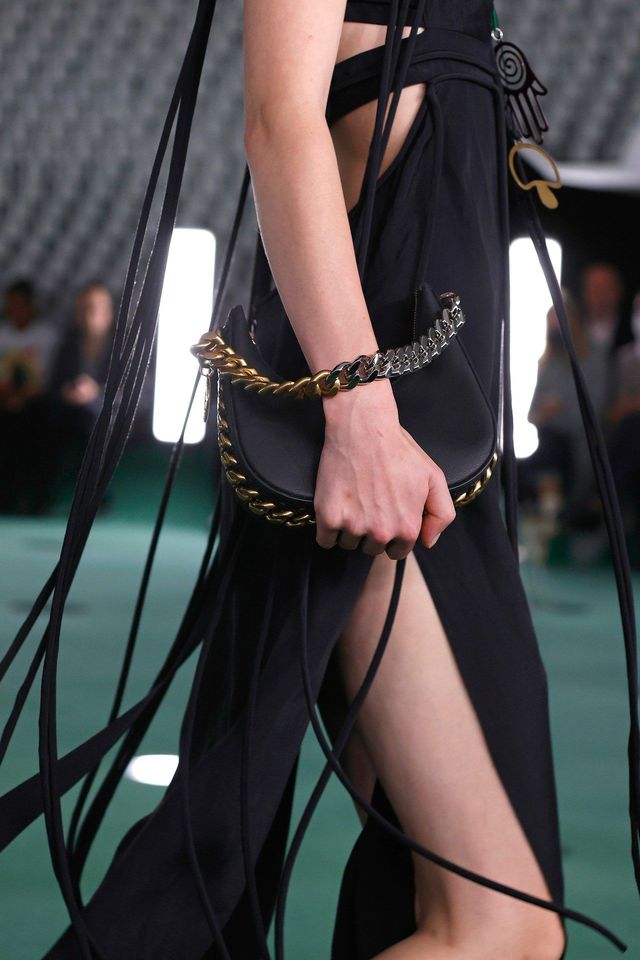 Gabriela Hearst’s Chloé show was a highlight, too, set on the Seine with a reduced lineup (31 looks instead of 50) and a new Chloé Craft capsule dedicated to entirely-handmade garments. Editors received a 9-page PDF outlining the collection’s sustainable fibers and multiple artisan collaborations, and the seating was built in partnership with women refugees.

Both shows were a success, but I’d be curious to see how their “media impact value” measured up to the bigger, flashier events on the calendar. It could be that McCartney and Hearst’s thoughtful meditations on the planet’s future found a smaller audience, albeit one that was probably more engaged. 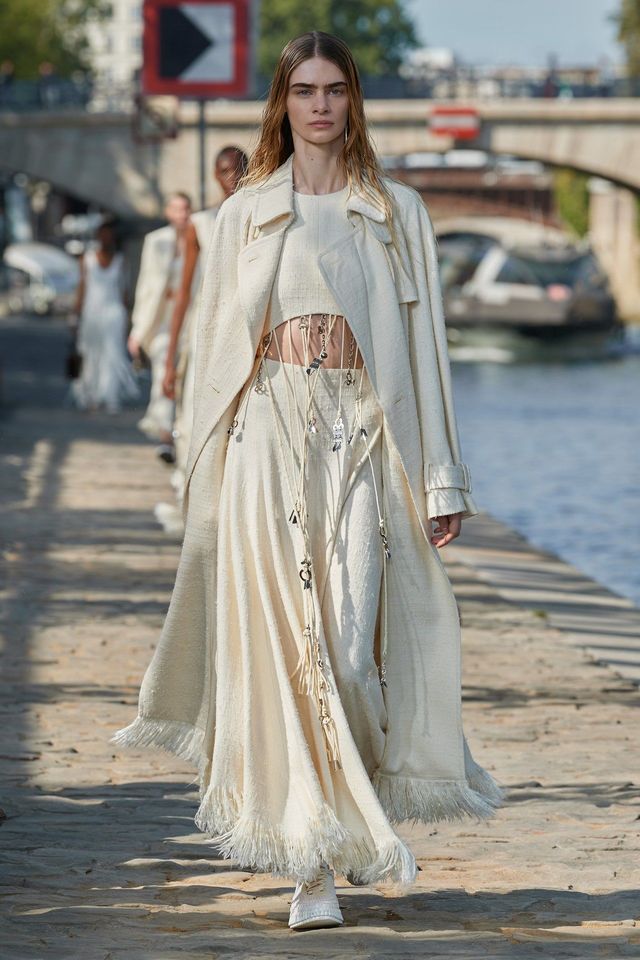 Even if Fashion Week isn’t the ideal medium for talking about climate change-how could it be if the demands for sales conversions and page views and spectacles continue to rise?-its visibility and influence on culture is unmatched. I just don’t think we have the luxury of choosing between a viral show and a meaningful one anymore. By the time the fall 2022 shows roll around, a dozen climate emergencies could have come and gone in the U.S. alone. In the not-distant future, we could be rationing energy, water, food, and transportation. Climate change is getting worse, and for all the conversations fashion had last year, our footprint isn’t any smaller. 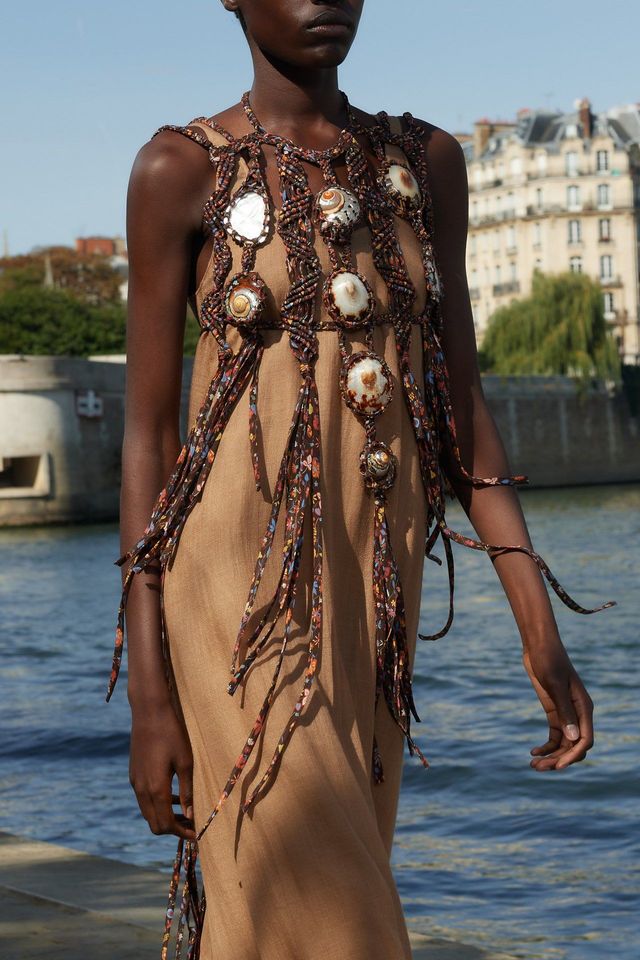 The month is over, so let’s celebrate that we did it: We had a real, full-on, IRL fashion season after 18 months at home. We’re still feeling the joy of getting back together and experiencing beauty, creativity, and new ideas. Now, it’s time for last year’s words to become action and for fashion to step into its power to change culture for the better. Sustainability and the climate need to be in the conversation next season and every season, not just when we’re stuck at home and glued to the news. It doesn’t have to kill the joy, either; designers should find it galvanizing. It’s just like Gvasalia said: We’re starting a new chapter.