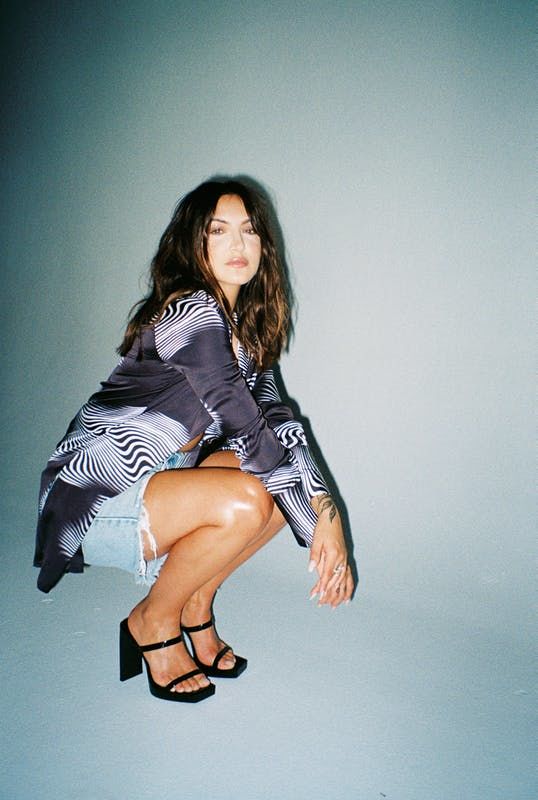 The songwriter-turned recording artist speaks to L’OFFICIEL about her personal style on and off the stage, including the role of tattoos and sharing a closet with her boyfriend.

It was Julia Michaels’ second performance ever, and she was terrified. The singer/songwriter recalls that moment, performing at with Kygo at the 2016 Olympics closing ceremony in Rio, as a trial by fire experience. But she also had a secret weapon.

“I had a friend that made custom clothes,” she recalls. “And I said, ‘I want to look like Diana Ross!’ So, she made me that green glitter suit. Originally it had a cape that tied around the neck, and was super long and really flowy. But it was raining in Brazil, like pouring rain, and when we did our sound check, the cape started wrapping around my heel and getting stuck. So I ended up just wearing that green suit. I love I still have it in my closet. I'm never going to get rid of that.”

The glittery international debut was a long time coming. Although she had been singing and writing since the age of 12, it was penning the theme song for the children’s show Austin & Ally that ultimately served as her Michaels’ introduction to the industry. From there, she quickly blossomed into an in-demand collaborator during a series of co-writes with A-list talent, that includes Gwen Stefani, Demi Lovato, and Justin Bieber.

The glittery international debut was a long time coming. Although she had been singing and writing since the age of 12, it was penning the theme song for the children’s’ show Austin & Ally that ultimately served as Michaels’ introduction to the industry. From there, she quickly blossomed into an in-demand collaborator during a series of co-writes with A-list talent, that includes Gwen Stefani, Demi Lovato, and Justin Bieber.

But it was her debut single “Issues,” released in 2017 that officially marked Michaels as an artist to watch. The song, which laid out very real issues (“When I'm down I get real down/When I'm high I don't come down”), struck a chord, thanks in no small part to how honest Michaels had been about her own anxiety, which at one point threated to derail her career as both a writer and performer. While it is an oversimplification to say that wardrobe choices solved it, as Michaels notes, knowing she can go into an event and look the part has a calming effect.

“There’s nothing worse than you're doing something and not feeling comfortable in what you're wearing. Feeling like you’re not yourself,” she says. “I'm grateful that I have stylists that I've been working with for a really long time that understand me, that know my body, then know what I feel comfortable in and just know what I really like…most of the time I end up buying most of the things that I wear.”

Obsessed with Grace Kelly and fascinated by Rihanna, Michaels describes herself as fairly open when it comes to dressing for eventsขwhich is how she ended up in a series of pop-art and Go-go dancer-inspired outfits in her new video “Lie Like This.” She can even laugh at the occasional misstep. (She cracks up while remembering an ill-fitting dress she claims made her look like a “sexy loofa.”)

“I find a majority of the time I end up without a shirt on,” she laughs. “Underneath most of my suits, I don't know how that happened. But I think that's my way of sort of feeling like sexy and like bold and my because almost every video I've ever done I've been in a suit, literally! I think suits make me feel super like strong and sexy…I think my favorite red carpet look to date is probably my Grammy dress that I wore in 2018. I had on a lavender, line cut dress that was super puffy at the bottom, and had these beautiful butterflies, all over it. That was probably my favorite dress I ever wore.”

The butterfly motif is important to Michaels as a symbol of freedom and beauty. (Her eyes light up as she describes a vacation with her boyfriend JP Saxe, where they discovered a butterfly sanctuary in Santa Barbara.) She even has a blue butterfly inked on her biceps, along with a collection of tattoos that includes messages to herself (“I have ‘speak up’ on my throat because I don't speak up enough” she notes) and other assorted aesthetically pleasing pieces.