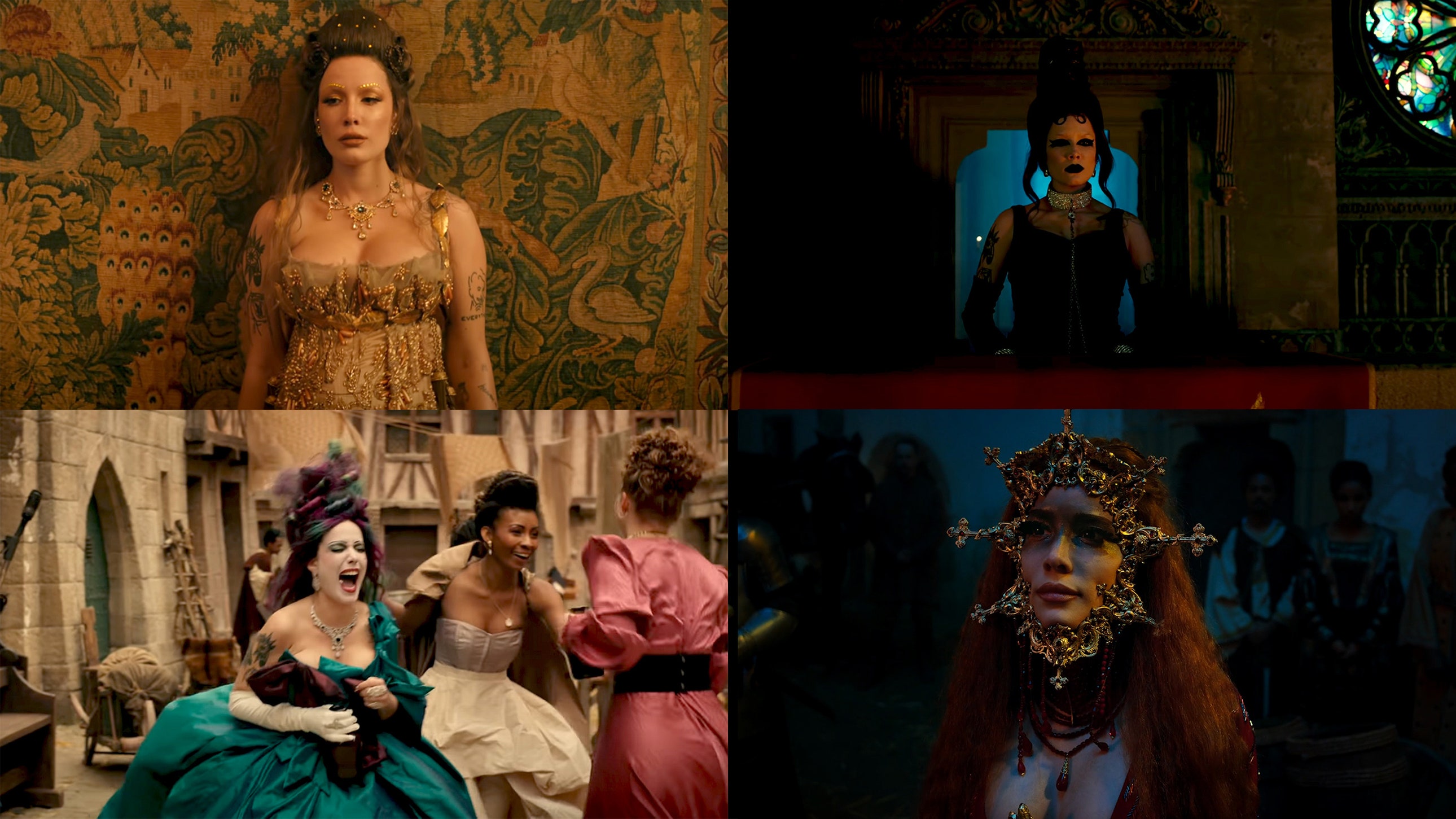 To create the epic wardrobe for If I Can’t Have Love, I Want Power, Roach looked to Vivienne Westwood, John Galliano, and more.

For musicians, visual albums represent one of the ultimate forms of expression. Artists have reached career highs by releasing films that connect their songs to a deeper message. This month Halsey debuted their take on the concept with, If I Can’t Have Love, I Want Power, a double whammy that combines introspective songs produced by Trent Reznor and Atticus Ross with full-on fantasy directed by Colin Tilley.

Released in IMAX, the hour long movie is a dramatic tale of courtly betrayals where Halsey’s thoughts on loneliness, romance, and motherhood come to life. If that wasn’t sensational enough, it’s also filled to the brim with high fashion selected by Hollywood image architect Law Roach, who served as costume designer. Roach, who was introduced to Halsey by her hairstylist, Martin-Christopher Harper, came to the project shortly after his first conversation with the star. “We just talked about fashion and the possibility of working together, then they offered me this incredible job,” shared Roach on the phone from Los Angeles. “At first, there were only supposed to be six looks, but it became so much bigger.”

The film’s protagonist, developed, written, and portrayed by Halsey, is a commoner-turned-queen whose abusive royal husband has died under suspicious circumstances. “This is a woman who feels powerful, but she’s also in a desperate [situation],” says Roach. “I wanted to build out her life through clothes that could reflect that.” The character’s duality is evident in the pieces that made the final cut. In mourning, the queen goes gothic in a sculpted black Stephane Rolland haute couture gown with shoulders details a Tudor monarch would approve of. Defiant moments call for the armored look of Joyce Spakman’s custom “warrior corsets,” which are decked out in gold, jeweled tassels, and miniature Renaissance portraits.

Though the story features the hallmarks of period drama-gossipy courtiers, villainous bureaucrats, and plenty of intrigues-Roach wasn’t limited to replicating the look of a specific historical era. “The exciting thing was we didn’t adhere to one reference point; we were able to bounce all over history,” he says. “There were pieces that felt very 1800s, others that were more baroque, some that seem like they’re from the 1600s. We had the freedom to create. Halsey gave me so much trust, and it was empowering.”

Working without a preview of the final songs and on a tight schedule, Roach and his team tirelessly created a wardrobe that matched the mood Halsey was trying to evoke. Many period projects rely heavily on costumes rented from archival houses. Instead, Roach focused on designers like Vivienne Westwood and John Galliano, whose work contains nods to classical reference points. “The fun part was finding modern clothes that were made to look vintage. We didn’t want to go to a costume house or rental place,” says Roach. “That would have made things easier, but it was more interesting to seek out these pieces, and when we couldn’t find the originals, we worked with designers to create new versions.

That vibrant green Vivienne Westwood dress Halsey wears during a playful scene with her ladies in waiting came straight from the brand’s spring/summer 1996 catwalk, where it was first worn by Linda Evangelista. The coordinating hot pink number used for a dream sequence was a custom creation whipped up by the Westwood team. Eagle-eyed fashion lovers will spy treasures like a black velvet gown from Christian Lacroix’s fall/winter 1998 runway and the spiky couture jewelry Shaun Leane created for Alexander McQueen’s landmark shows in the early aughts. Roach adds to the surreal vibe that Halsey and director Tiley sought by combining the designs to make editorial-worthy outfits. “As a stylist, opportunities to tell a story with this magnitude of clothing and all these archival pieces are rare,” he says. “It’s incredible just to touch and play with them because they’re a part of history.”

With the final project now available for the world to see, Roach is ready for what comes next. “This is my second film of the year, so I’m on a roll,” he says, nodding to the sleek evening wear he outfitted Zendaya in for Malcolm and Marie. “This experience was a dream, but we’re only getting started.”