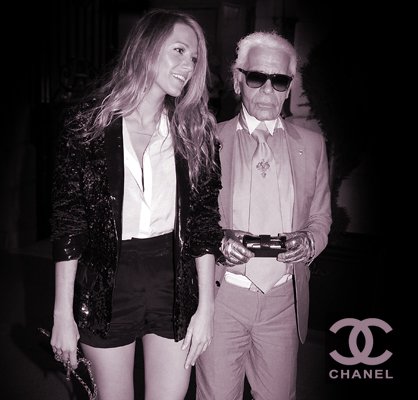 Blake Lively of “Gossip Girl” fame is moving on to new pastures. The actress has been chosen to be the official ambassador for Chanel’s new Mademoiselle line of handbags. The ad campaign, snapped by designer Karl Lagerfeld at Chanel’s historic Rue Cambon headquarters, is expected to be released to magazines in April.

He reports the shoot was a breeze. “It was an easy job because everyone fell in love with her,” Lagerfeld said.

Lively, famous for her portrayal of Serena van der Woodsen on the well-known teen drama “Gossip Girl,” has swiftly risen to stardom.  She got her lucky break with Chanel when she met American Vogue editor in chief Anna Wintour at a dinner in July during couture week in Paris. After Wintour did the intro, Lagerfed took her on a tour of the set. Lively excitedly snapped a photo as a memento, never suspecting Lagerfeld would someday be shooting her.

“How did Cinderella feel when she slipped on the glass slipper? How did Snow White feel when she met her Prince Charming?” she declared. “A dream come true is an understatement. I can say that I feel like the happiest, luckiest girl around.”
×