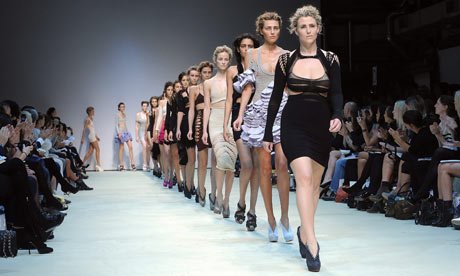 A designer's decision to use size 12 and 14 models at London Fashion Week yesterday caused a behind-the-scenes row that ended in his stylist walking out. Mark Fast, known for his sculpted mini-dresses reflecting the recent body-conscious trend, used three models of a size larger than the catwalk is used to seeing – Hayley, Laura and Gwyneth – to model his knitwear designs.

Within an hour of his show on Saturday morning, an Elle magazine journalist sent out a tweet saying Fast's stylist had resigned over his use of the models. Fast's managing director, Amanda May, said she was "so happy we stuck to our guns over the casting". She told the Observer that stylist Daniella Agnelli had stepped in to help out. "She was in the studio until after 2am with Mark perfecting the show. We are really grateful to her."

Fast had been working with size-12 model Hayley Morley for the LFW photography exhibition, All Walks Beyond the Catwalk. It launched on Friday at London's Somerset House with a party attended by Alexandra Shulman, editor of British Vogue, and prime minister's wife Sarah Brown, who admitted she had "sneaked out" of a number 10 reception for British designers she was hosting.