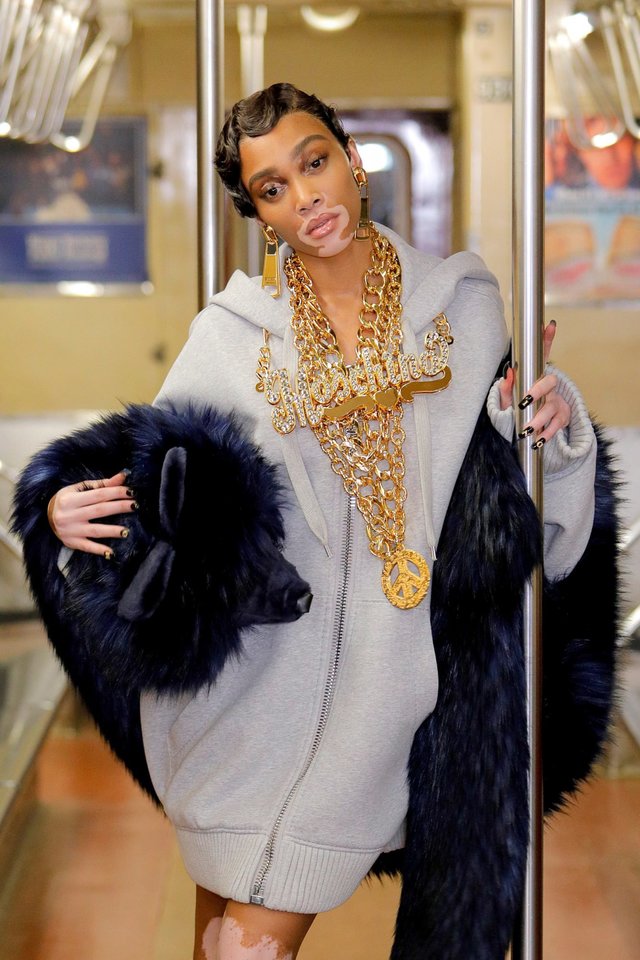 Jeremy Scott’s Moschino is known for extremely literal interpretations, and his ode to ‘80s in the city was no different.

Over the last ten years, the setting for fashion shows has changed drastically. Where we once saw supermodels slice through rows of bleachers in Bryant Park tents with their defining walks, we now have airport hangars, empty train stations, warehouses, boats and everything in between. An interesting backdrop has almost become an expected feature from major designers, even during their off-season shows. For 2020 Pre-Fall, Moschino designer Jeremy Scott set his runway in old subway cars at the New York Transit Museum in Brooklyn, and guests were provided with Fiji Water as a refreshment. 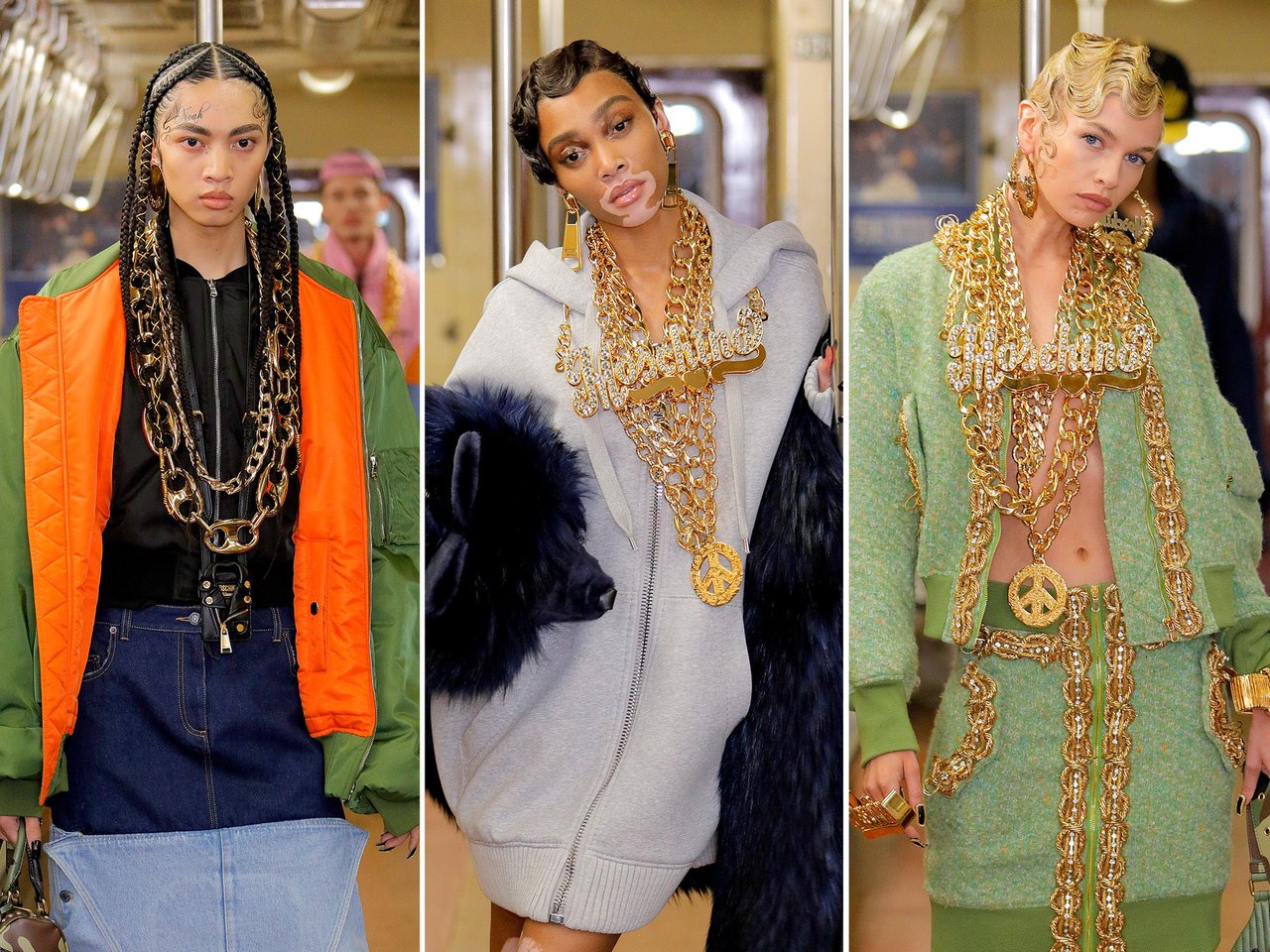 The show featured a collection that was the same exaggerated satire that we’re used to seeing from the designer. It was a throwback to ‘80s New York City style, with models like Imaan Hammam, Stella Maxwell, and Winnie Harlow wearing oversize gold chains, tracksuits, door knocker earrings and Timberland-esque work boots - a direct callback to the early days of hip hop, arguably the city’s first definitive streetwear trends. There were supersized backpacks and hats which were more costume than wearable (and if anyone actually wore them on a subway they’d probably have some issues). Breakdancers danced on to the train to create a mood that was a riff on the collection’s inspiration. 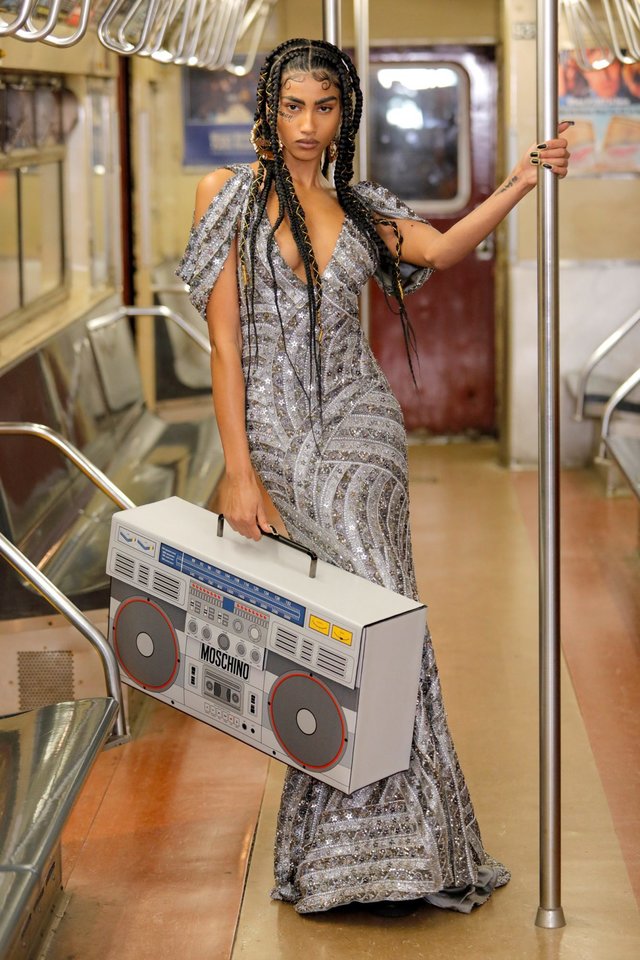 In the past, Moschino has created buzzworthy pop culture pieces that were very on-the-nose creations from what inspired them. There were Windex spray bottle phone cases, Champagne bottle purses, and McDonald’s uniforms on the runway. At the 2019 Met Gala, Katy Perry wore a Moschino chandelier outfit and took the “Camp” theme to mean costume.

Scott is often literal in his interpretations for Moschino collections, letting the reactions to his work be the more interpretive part, and for pre-fall, this meant a very specific scene of the early ‘80s in New York. Like many other intended homages in fashion, however, the comment a collection is trying to make can sometimes feel like appropriation, especially when the style of a cultural moment is created in a way that’s costume-like. On social media, the views were mixed with many claiming they couldn’t wait to use the pieces to pump up their subway looks, and others remarking that the pictures created with oversized hats and backpacks felt like culture memes that anyone can now buy into. For many, what was missing was the credit and recognition of where these trends originated. 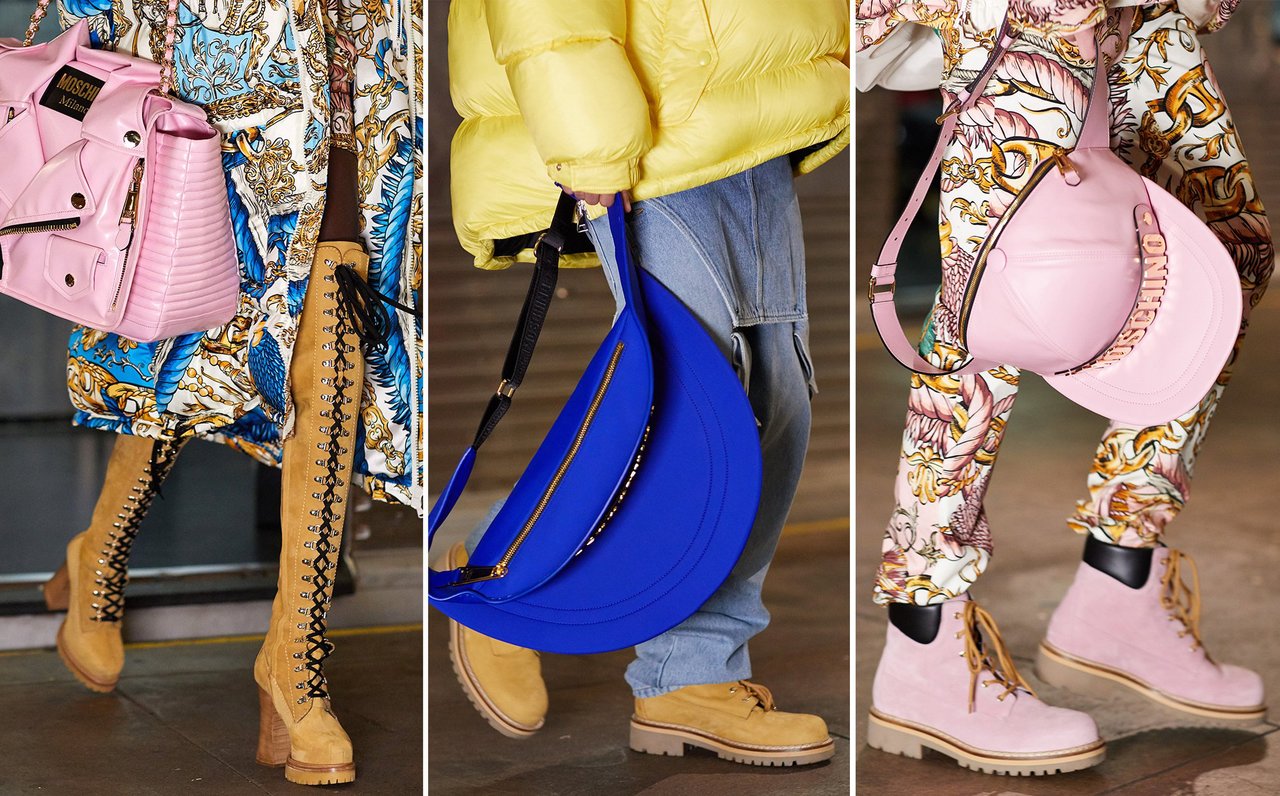 Regardless of the critiques about the way Scott uses culture in his collection, it seems that part of the intent of the show was to create an ode to a New York City that’s long gone, which many people in fashion today had no part in, having arrived after much of that culture was sanitized or gentrified out of the areas - and styles - they now view through nostalgia. Whether Scott was challenging us to see that very discrepancy, or further perpetuating it, is up to the viewer to discern, but either way, the retro subway setting was the quintessential place to lay this scene.

As social media’s all-access pass to fashion has made the cost of putting on a runway show questionable, designers are doing more and more to set an engaging scene that speaks to the collection - to imbue their show with a “you had to be there” feeling that used to be central to the Fashion Week experience. A beige, old subway car is where you would have seen many of the styles Moschino pre-fall pulled from. Whether the brand strayed out of its lane with this particular aesthetic, perhaps into a Borough and an era in which it didn’t belong, it did present a very true representation of how these clothes would’ve come to life in their day.