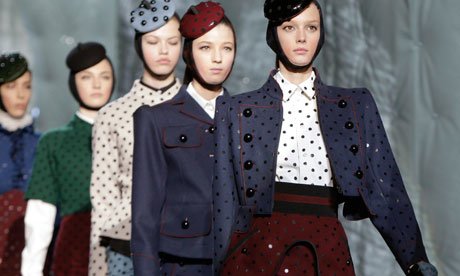 New York fashion week: Marc Jacobs's fetish for change leaves them all behind

"I wanted discipline, severity and fetish," Marc Jacobs said backstage after his stunning show at New York fashion week. For all the women who have just splashed out thousands on his current, louche 1970s spring collection, this is very bad news. But Jacobs, whose show is the most influential in New York, is known for his biannual about-turns.

It was clear the label was heading in a different direction from the show set. Tall, padded vinyl columns dominated the mirrored catwalk. Those skilled in catwalk semiotics might have guessed there was to be something fetishistic and synthetic about the collection.

Models in dresses crafted from rubber circles made to look like sequins stormed down the catwalk. Next came a rash of giant spots – over trousers, jackets and bags, along with sequin-sheath dresses, rubberised trousers, pronounced patch pockets, and lace dresses worn with rubber-frilled jabots. Sculpted jackets with peplum waists recalled classic couture lines.
×