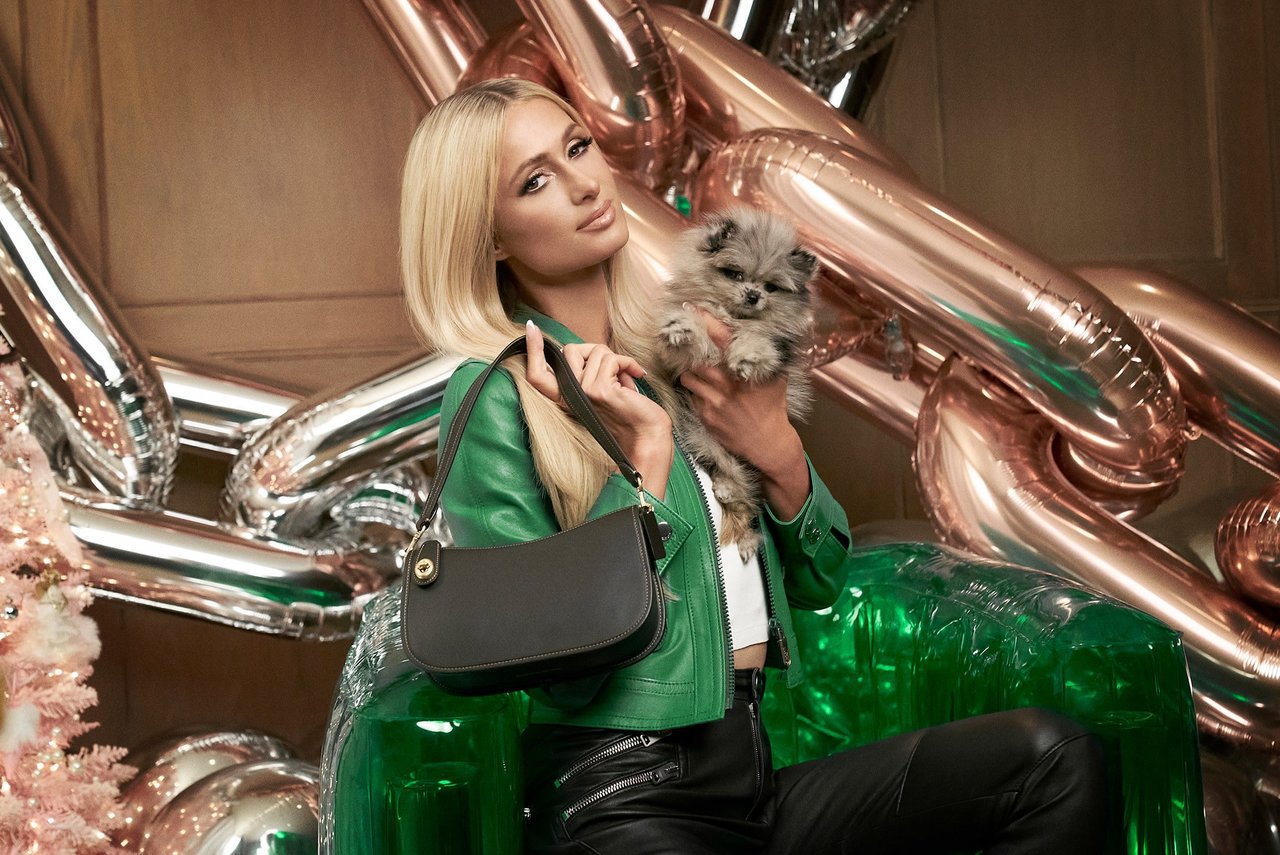 Paris Hilton on Her New Coach Campaign, the Return of Y2K Style, and What She’s Doing for the Holidays

Paris Hilton is the queen of the 2000s-no contest. She dominated the era with her bedazzled Juicy Couture tracksuits (which are back, by the way), iconic designer bags, and huge sunglasses.

It’s no wonder that Coach casted her for a new Y2K-inspired project: Hilton stars alongside Kim Petras and Rickey Thompson in a new bag campaign that honors the label’s re-released Swinger bag. The Swinger is an archival Coach bag that channels the shoulder bags of the early-aughts (the label revamped it, however, with luxe leather and its signature monogram print).

Starring in the holiday campaign was nostalgic for Hilton. “I’ve always loved Coach since I was a teenager,” Hilton says. “I remember in New York when I went to the Coach store and bought my first bag. My mom always had amazing [Coach bags] too, and my sister and I would always go into her closet and play dress up.” As a notorious bag lover in general-can you even think of the 2000s without remembering her endless array of Louis Vuittons?-Hilton knows a bag can make or break your look, and says a sleek shoulder bag like the Swinger is a timeless Y2K style she’s always gravitated towards. “Having a handbag is such an important accessory to an outfit,” she says. "I love that they're bringing it back."

Below, Vogue asked Hilton her thoughts on Y2K style coming back, what her designer bag collection looks like, and what she’ll be doing for the holidays this year.

You’re a well-documented bag lover. What, to you, makes a perfect bag?

The most important thing for me is the style and design of the bag, and what it looks like on the outside. Something that’s a statement piece and stands out. But also, what’s inside is important: I love when there’s different pockets for your phone or your lip gloss. I always love something that is actually useful and makes my life easier.

You’ve owned many icon designer bags over the years, especially from the 2000s. Do you still have them?

I have a lot of bags from over the years, from shopping or designers sending me certain things. During the early 2000s, I actually got rid of a lot of my bags, because I just had so many that couldn't fit. When Kim [Kardashian West] had her eBay business, she helped me get rid of a lot of the things that I didn't need. She was always very organized, and I'm like the most disorganized person in the world. But I have kept some. I obviously have my Louis Vuitton bags that I love, the Fendi Baguettes, the [Dior] Saddle bags, all my Chanels. I've been collecting Judith Leiber [bags] since I was a teenager, so I have a lot of those, which are very 2000s.

Were there any bags you regret giving away?

Yes! Because now the 2000s are coming back in such a huge way in fashion. There’s so many things that I thought, ‘This isn’t in fashion anymore, just get rid of it.’ And now I wish I hadn’t, especially my Dior monogrammed [bags]. A lot of stuff, too, was stolen by the Bling Ring. They literally came in here eight times when I was out of town, and every time they would pick up as much as they could fit in their arms. They stole like all my Birkin bags, all of my iconic Dior bags, my Louis Vuittons-anything that was designer, they took. It’s heartbreaking because I'll never be able to replace any of that.

What are five things that you always have in your bag?

I’m like Mary Poppins: I like to carry around everything. I’m always prepared for every situation. Lighting is very important to me for photos, so I always have my holographic Lumi case from my collaboration with them. It makes selfies look perfect. My iPhones, of course. I have these really cute hand sanitizer bottles that I bought at Kitson that are covered in Swarovski crystals-it kind of looks like a Judith Leiber bag. They’re really extra and glamorous. Carrying around a normal Purell bottle is beyond, I don’t like it. If we're gonna have to do all this, I'd rather make it fashionable-same with my masks. I always carry around my Paris Hilton lip gloss, and my perfume. I just released my 28th fragrance, so I always have at least one of my 28 perfumes in my bag at all times, because I love the way it makes me feel when I spray it.

Since your campaign is very 2000s-inspired, what do you think is the key to pulling off Y2K style today?

It’s really about just being as extra as possible. With social media, it’s really important to have exciting pieces that are going to be really beautiful visually, in a photo or on Snapchat or TikTok. With fashion right now, people just want to show off what they have in their content, so it’s important to wear something that will grab your eye and attention.

This is a holiday campaign, so what do you think you’ll be doing for the holidays this year?

Every single year, my sister and I usually throw a huge Christmas party at my house. It’s called ‘Holidaze with the Hiltons.’ It’s the most epic, crazy party every year. Hundreds of people come and there’s amazing performances. It’s sick. And then two days later, we will host my parents’s Christmas party with them at their house, which is obviously a lot more chill. But with the pandemic, we’re not going to be doing that. This will be the first year that I’m not having a Christmas party in I don’t even know how long, which is sad, but obviously it wouldn’t be appropriate to throw a big Christmas bash. I spent last Christmas with my boyfriend's family: We went to Michigan and then to Yellowstone to go skiing. So this year, we're trying to decide if we're going to go to Michigan, or maybe go to an island or on a boat somewhere.

Are you big on holiday dressing in general? Do you plan on getting festive, even if you’re at home?

Yes, I love it. I always love to wear something festive in bright red or in velvet-something really beautiful that stands out. I also always get a Mrs. Claus outfit made, and I usually wear it when I go to the L.A. Mission, a homeless shelter downtown. I bring gifts and food for all the kids and people that are there. If I have my Christmas parties, in the beginning I'll wear a really beautiful sparkly holiday dress, and then I'll change into a sexier Santa outfit. And I dress up all the dogs, too. I just ordered a bunch of Santa and elf costumes for them on Petco this weekend, and all these crazy decorations. I like to decorate their doggie mansion and give them a tiny little Christmas tree.

I'm also used to hosting the most incredible New Year's Eve parties every single year in Miami, Australia, Vegas, New York-wherever I am. I’ve been doing that forever, and this year will be the first year that I’m not hosting something. But I’ll still dress up, because it’s New Year’s Eve, and I love collecting memories with photos and videos. I’ll be capturing the memories of my boyfriend and I’s second Christmas and New Year’s together.