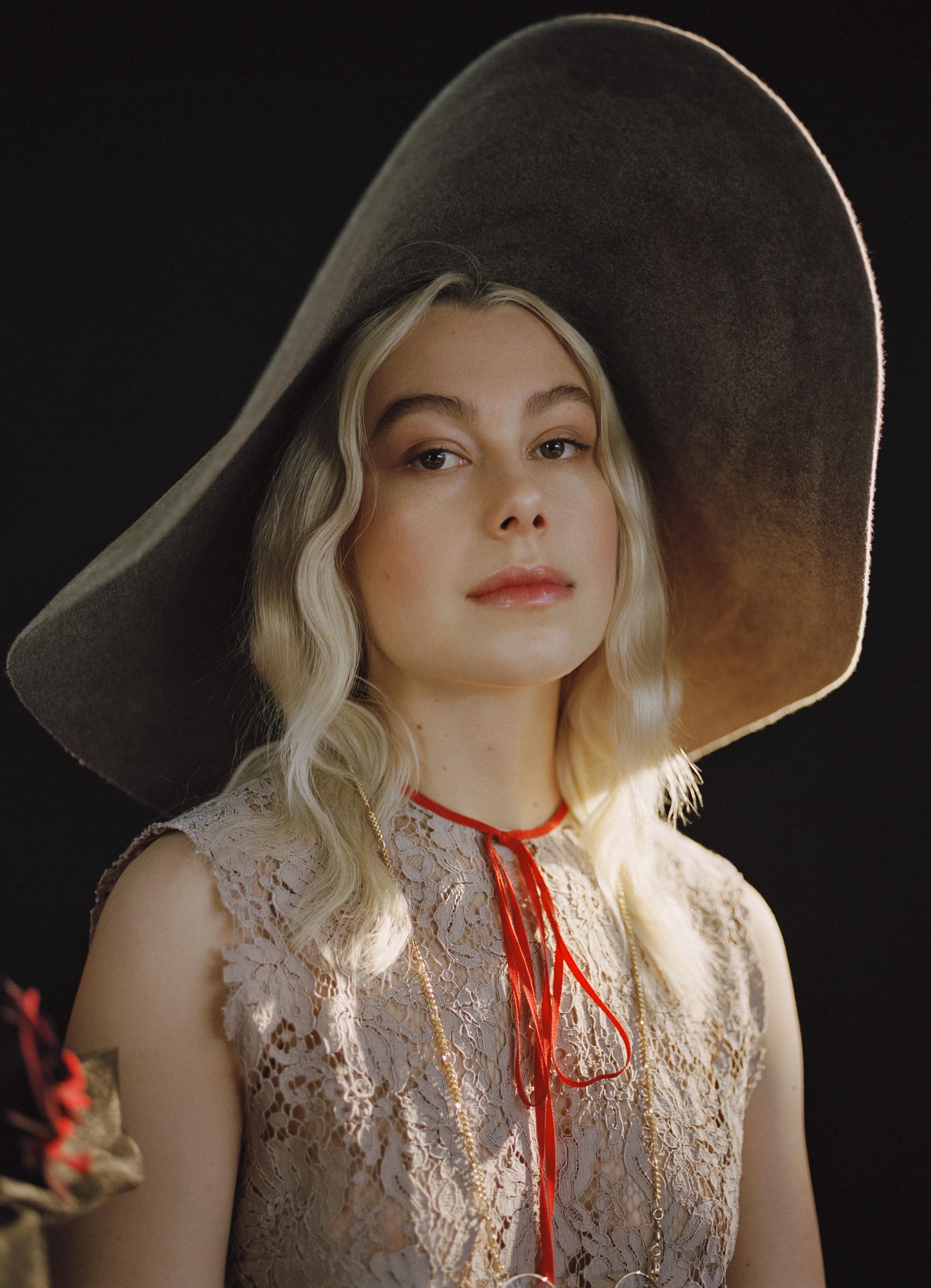 Phoebe Bridgers is a Free Bird

Before Phoebe Bridgers was smashing guitars in custom Gucci on Saturday Night Live and collaborating with indie legends like Conor Oberst, she played bass in Sloppy Jane, the alt-rock outfit fronted by her high school best friend, Haley Dahl. Though Dahl has since expanded the band to include 11 members-often taking the stage herself wearing nothing but blue paint-the two musicians spent their formative years in a state of constant experimentation, eventually finding a sound and performance style all their own.

Growing up in Los Angeles, the pair had their own remedies for fighting teenage boredom and suburban ennui. “We would ditch class and do absolutely nothing,” says Dahl. “We never actually did anything cool; one time we just sat in Phoebe’s car and ate a tub of cookies.” Bridgers interjects: “And then later we crashed my car-or I crashed my car. I remember the smoke was billowing up, the shock was setting in, and the first words out of your mouth were, ‘Dude, you’re crunched.’” 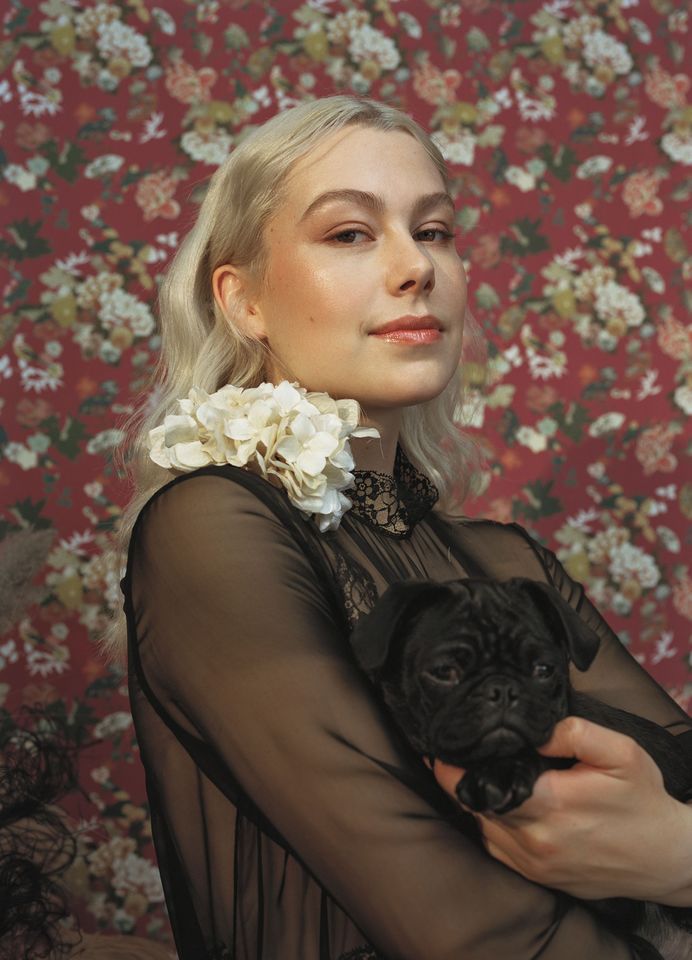 Of course, Bridgers has come a long way since her days of cutting class to loiter at Amoeba Records, trading house shows and folk festivals for global stages. The 26-year-old’s Grammy-nominated sophomore album, Punisher, arrived in 2020 during the thick of the pandemic, a haunting dissection of death, sex, and self-destruction-and a near-perfect soundtrack to the languid hopelessness that wove itself through a year of upheaval and uncertainty. Though Bridgers and Dahl are now on opposite sides of the country-Bridgers at home in Los Angeles and Dahl in Brooklyn-the two manage to reconvene over video chat to reminisce about high school, being a woman in music, and their many stupid ideas. 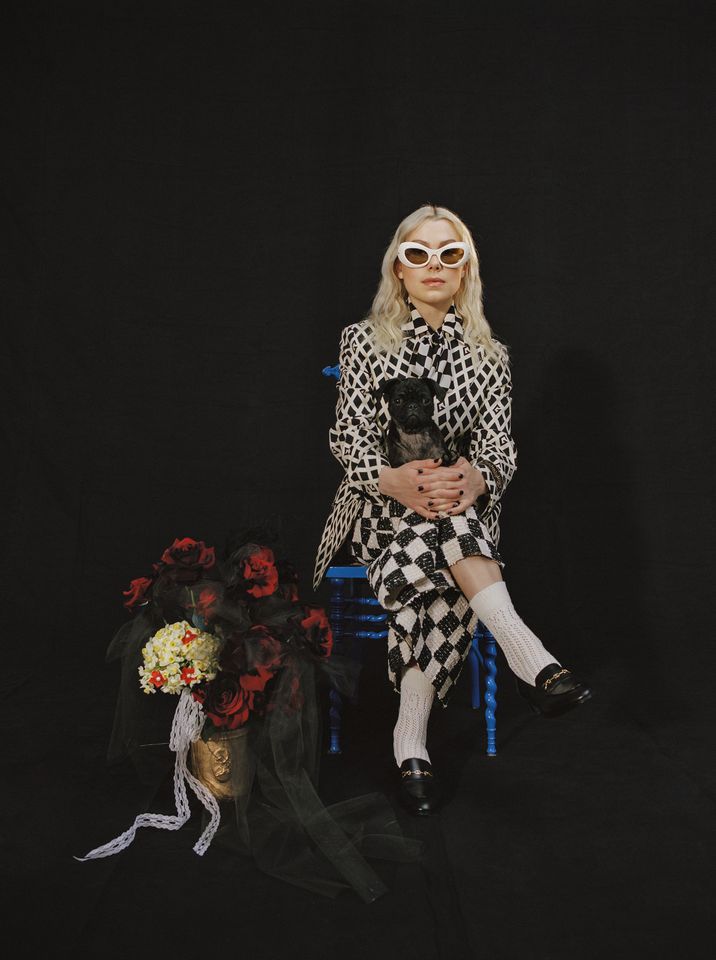 SABRINA ABBAS: You both have known each other since high school; what was it like to be in each others’ lives during such a formative period?

HALEY DAHL: Everything at that time felt like weird false starts. Every day we would tell ourselves, Today is gonna be the day that something crazy happens, and no matter how hard we tried, nothing ever did. When you’re young you just want so badly for your life to be interesting when it’s just not. And you destroy yourself to try and make it interesting. I feel like you, Phoebe, were always someone that I would go to right after I fucked something up really badly. Like, I went over to your house right after setting my ex-boyfriend’s synths on fire.

PHOEBE BRIDGERS: We both had himbo boyfriends in high school. Which I mean in the most loving way possible. We all went to prom together and blasted “Free Bird” out of your boyfriend’s car.

HD: Our prom was annoyingly on a yacht and the music wasn’t good, so once the boat docked, we left and slow danced in the parking lot, because we wanted to actually do the prom thing.

SA: That’s the coming-of-age movie moment.PB: That’s what we wanted, and we never got it!

HD: When you’re young you want these moments where everything aligns and something special happens, and we all synchronized and decided to have this school-ending moment together.

SA: Phoebe, you’ve said that Haley once made the wisest insight into being a creative: that the strongest ideas often first start out as jokes or stupid concepts. What would you both say are your greatest bad ideas?

HD: As that’s one of my main weird philosophies, I can’t even discern anymore what was a stupid idea to begin with. My work in nature is very ridiculous, so I feel like most things started as something stupid. I did make a record where I dragged a piano and an orchestra into a cave-something I threatened to do in a melodramatic moment after I got my heart broken—but then I actually did it. Most of the stuff that I do is like that, where I meant it as a cartoon but then I actually followed through.

PB: Recently I thought, Wouldn’t it be stupid if I broke a guitar on stage? Because I don’t make that kind of music. It’s hard to tell what’s a joke anymore because I have surrounded myself with people who trust me, and I also trust my own intuition more, but it used to be that I would throw something out as a joke just to see if people thought it was a bad idea. Like when you first start seeing someone and you say, “Wouldn’t it be funny if we kissed?” 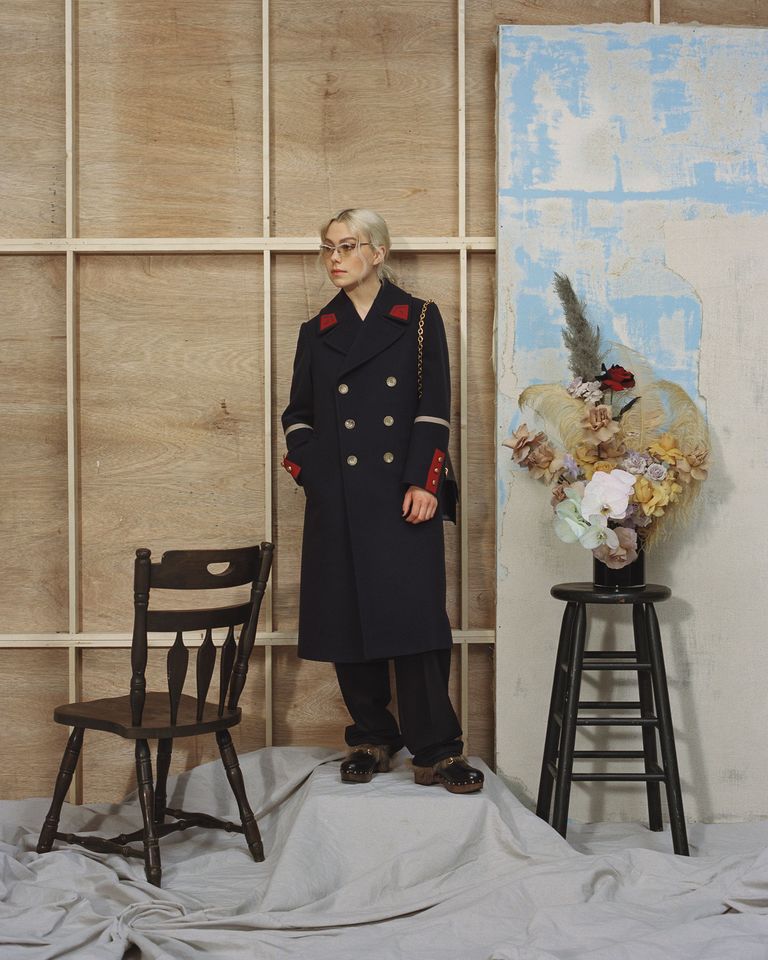 SA: You’ve tweeted in the past about how hating bands like The 1975 and Bright Eyes is “sexist.” Why do you think that is?

PB: A band like The 1975 will get a horrible review and then sell out Madison Square Garden because teenage girls invented what is cool and popular. Conor [Oberst from Bright Eyes] would always get people saying “My girlfriend really loves your music” to him.

HD: It’s funny, because you see these musicians just now getting their due. I recently had a guy friend hit me up and say, “I’m not cool anymore because I realized that the new Hayley Williams record is good,” but she’s always been good. People didn’t take it seriously when it was happening because it was “girl music.”

PB: I was dating a metalhead when I was around 13, and I asked him what he thought about Paramore, and he said it was stupid and that Hayley Williams is just “a chick who dances around.” I also think that wearing a stage costume is so weirdly gendered, even though Kurt Cobain wore a costume too-he thought about what t-shirt he was going to wear to every single red carpet. Bruce Springsteen is also wearing a costume-and metal? Don’t even get me started. Those dudes are wearing eyeliner, but somehow Hayley Williams flipping her hair around is not hardcore? It’s such a crazy double standard about who’s allowed to dress up or not. 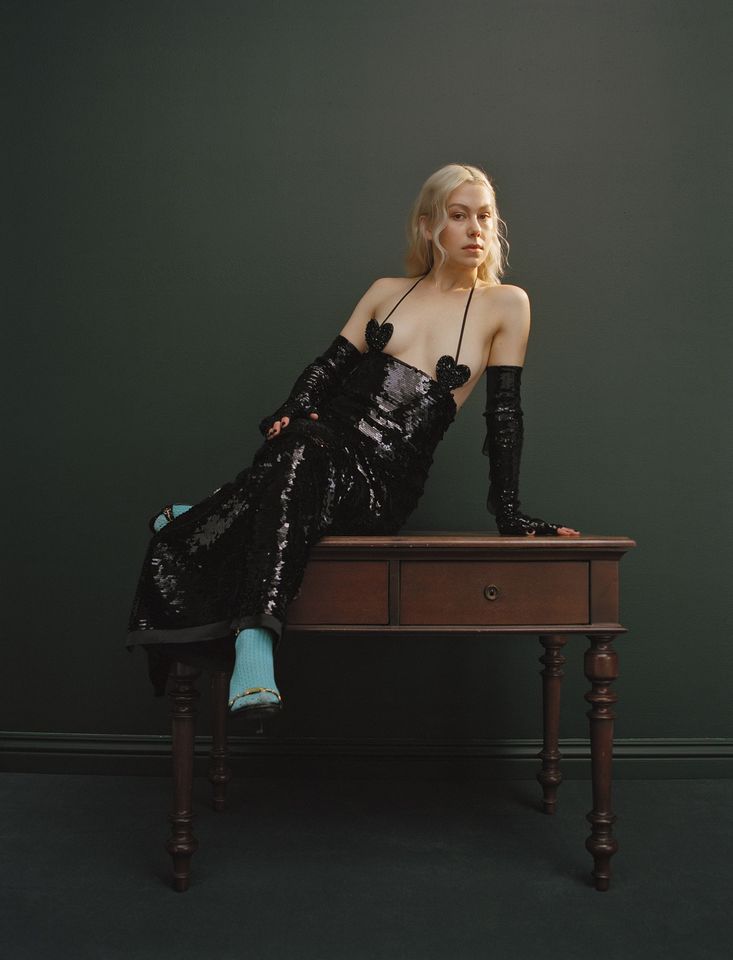 SA: Did the band have any traditions when you performed together in Sloppy Jane?

HD: I really liked being an asshole, and I wanted our old shows to feel like hostage situations. We had a TV on stage, and I liked to make us all “fall asleep” at the end of shows and leave the TV playing to see how long people would stand there for. People would stay for a half hour and we’d be stuck on stage because people thought they were watching performance art.

PB: One time I just got up and went home. I feel like I was very, very bad at bass. We were playing house shows with trash fires, though, so I don’t think anyone noticed.

SA: Stage theatrics are a big part of Sloppy Jane.
HD: Yeah, the thing that sucks with stage theatrics is that no matter what you do, it changes the standard. I do a lot of crazy stuff on stage, which makes people then critique what I do on stage.

PB: People were kind of reductive with Sloppy Jane, commenting on how the blue paint was so amazing when you just played an awesome eight-minute piano ballad. It was always dudes, too. One time I brought my friend to a Sloppy Jane show, and he was looking at me, and I was looking at him, and there was paint and you were naked and I was like, “Yeah, it’s fucking wild.” And he just goes, “It’s so hot.” I mean, what? You’re literally vomiting paint into a microphone. When stuff gets misinterpreted, that’s my least favorite thing. 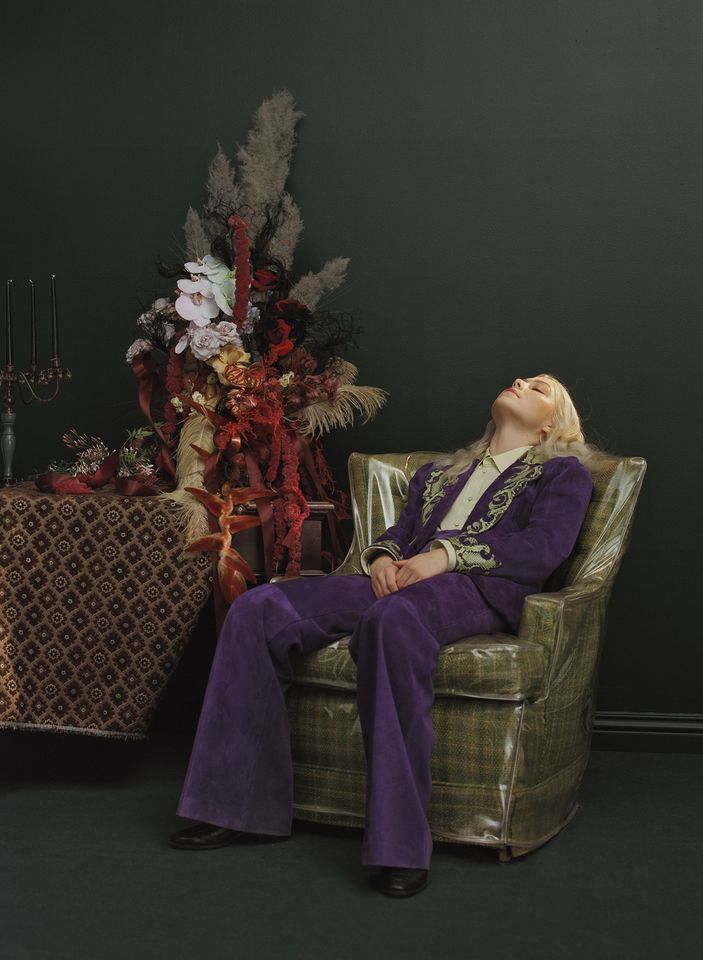 SA: What role does fashion and personal style play in performance for you?

HD: I personally always like to wear the same thing for each cycle I’m going through. It helps put me in the mindset of becoming whatever I am at the time. I’m super gross, too, like I won’t wash the stuff I wear onstage. I have my one outfit that’s just disgusting. My onstage outfit right now is this blue velvet suit that looks super nice from far away, but is actually an Austin Powers Halloween costume I got tailored.

PB: It looks like Gucci to me, honestly. It looks like something Jared Leto would wear in a Gucci ad. But I feel the same exact way about a costume. I make my whole band wear suits, and I love wearing fancy things. I made [Lucy Dacus and Julien Baker of] boygenius wear matching costumes-they were very down-and now I have this keepsake forever. It marks an era and is a memory of that time, and it also becomes this ritual of doing your hair and makeup for the first time that day at 7 p.m. and becoming your stage self.

HD: I always talk about how consistency is the best punchline. Like if you say you’re going to wear something forever, it only becomes more true the more times you put it on. It’s the same thing with costumes. At first people may not get it, but eventually it becomes your signature.