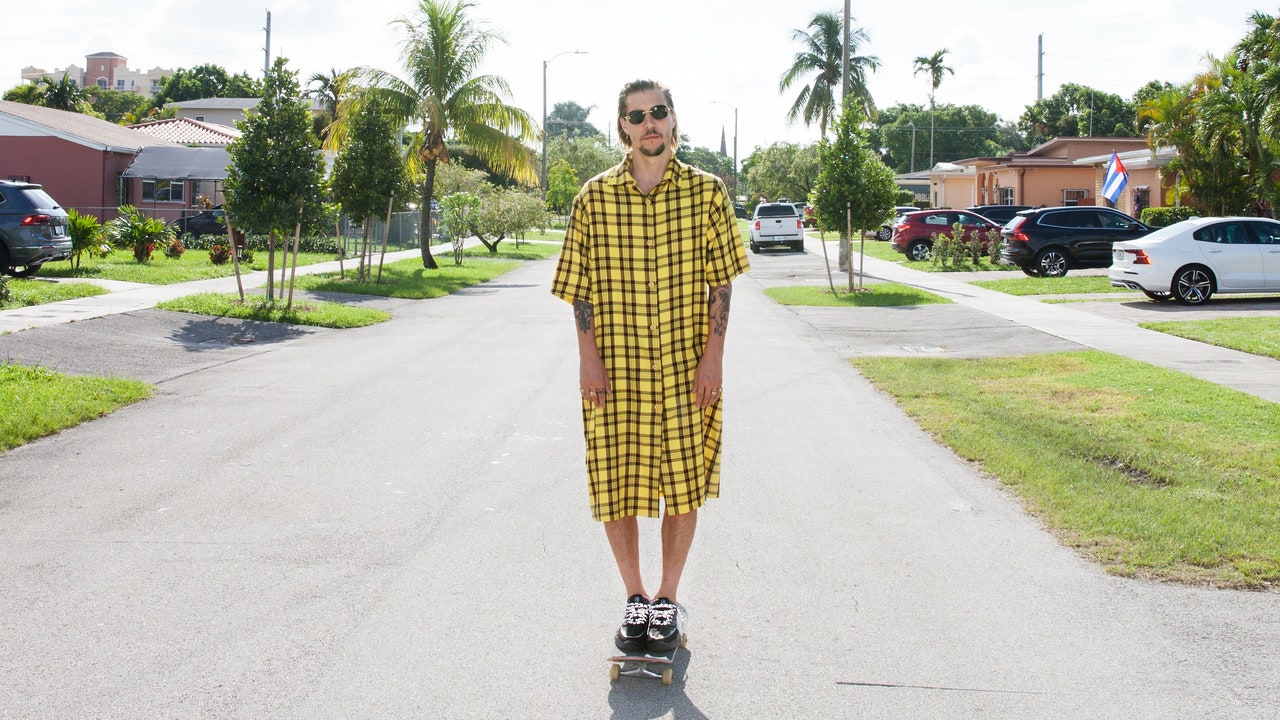 Catherine Hahn is no stranger to shopping in the women’s section for her male clients, pulling frilly blouses and jewelry, and remaking women’s-inspired pieces for her guys. “There never seem to be as many options [for men] as ladies’ clothing,” says Hahn. Last April, she styled Post Malone in a dress, a dainty floral-print frock that the artist wore over a white T-shirt for his live-streamed Nirvana tribute concert in Los Angeles. The look was an ode to Kurt Cobain, who wore a similar dress when he performed at a concert in Amherst, Massachusetts, back in 1990. The iconic fashion statement still packs a grungy punch. Malone’s rendition was applauded by fans and the media alike. The moment was a catalyst for Hahn to launch her own line of dresses for men this summer, called Hesher World. “Posty looked so cool and comfortable in the dress which inspired me to design more and want to make dresses for all! It’s so nice to have menswear options outside of the traditional suits, pants and shirts, or shorts and shirts, combinations,” says Hahn. “I wanted to make a unisex dress that could be worn every day. To work, to school, to skateboard in, or on a date.” 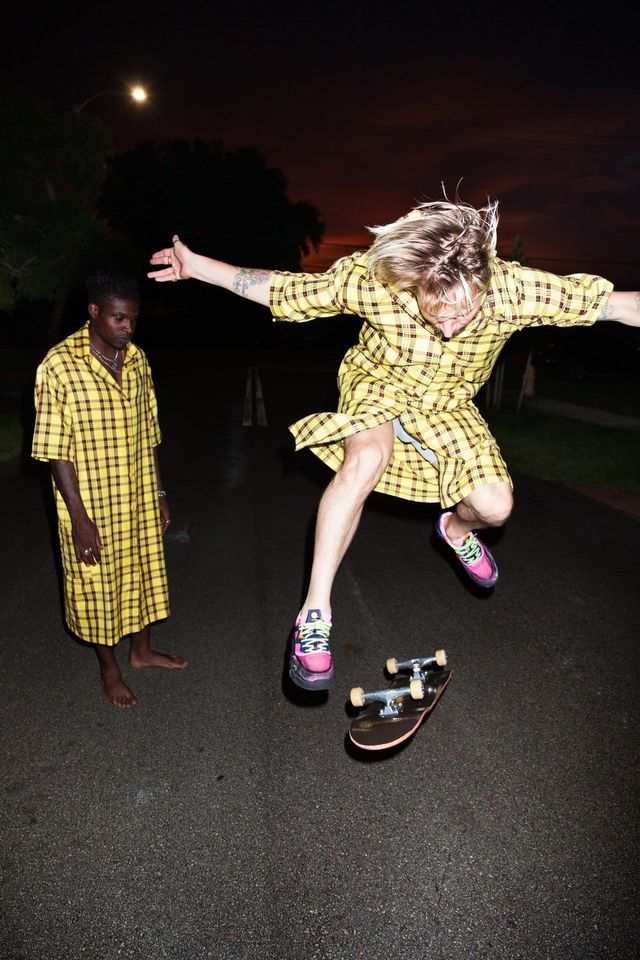 Hahn’s dresses certainly have a punk edge. “I’ve always liked the punk rock attitude of no rules. Wear whatever you want,” she says. The name Hesher itself is derived from an UrbanDictionary.com definition: Someone who is stuck in the ’80s and has an “outlaw attitude.” Hahn’s first piece for Hesher World was a yellow plaid shirtdress, a kind of button-down that has morphed into a caftan. Two brolic dudes, Erik Ellington and Davey Sayles, model the dress on a suburban Miami street, wearing the pieces with slide sandals and while riding a skateboard. 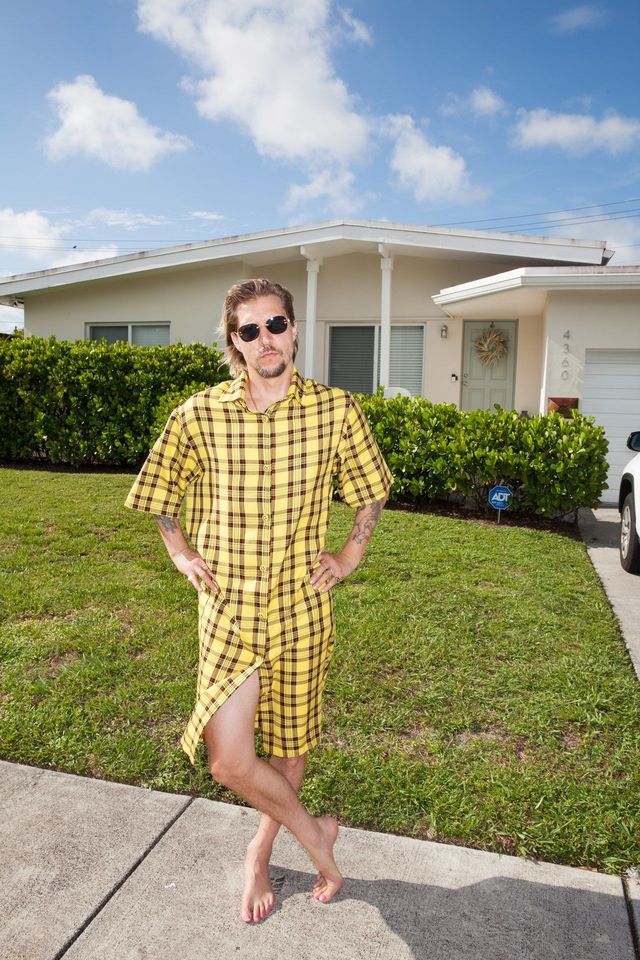 Hahn is particularly inspired by musicians: the aforementioned Cobain, the Beastie Boys, David Bowie, Mick Jagger, Kurt Cobain, and Axl Rose. “There’s a scene in the Beastie Boys documentary where one of them is in a kilt with a button-up white shirt. Such a rad look,” she says. While dresses and skirts aren’t necessarily the hottest item for men, they’re certainly becoming more popular. “I was in Heaven, the new Marc Jacobs store, the other day and there was this kid working there who was rocking a kilt with an oversized tee,” she says. 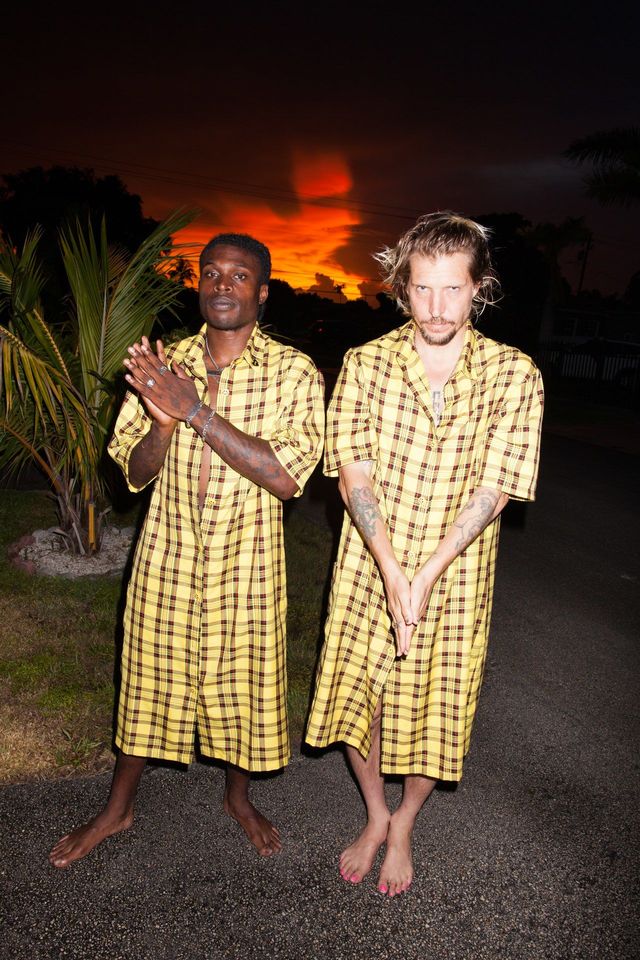 Celebrities who have donned skirts have included Young Thug (who also wore a dress on the cover of his 2016 album, Jeffrey), Harry Styles, and Marc Jacobs, who regularly chronicles those knee-baring looks to his Instagram. In the ’90s, Jean Paul Gaultier brought them to the menswear runways; so did Thom Browne in fall 2007. This past summer, Vogue fashion writer Christian Allaire interviewed five people who don’t identify as women and who love skirts, including Quin Lewis, “a Washington-based foreign-affairs official by day, [and] a regular skirt-wearer and street style fixture at the menswear shows,” as well as model and designer Victor Vegas. “I wear a skirt because I want to. It’s a big fuck you to all the people who think it’s a big deal for a guy to wear one,” Vegas told Allaire. There is data to back up the skirt shopping, too: Lyst ranked Thom Browne’s menswear skirt as the 10th hottest item in their 2021 second quarter. 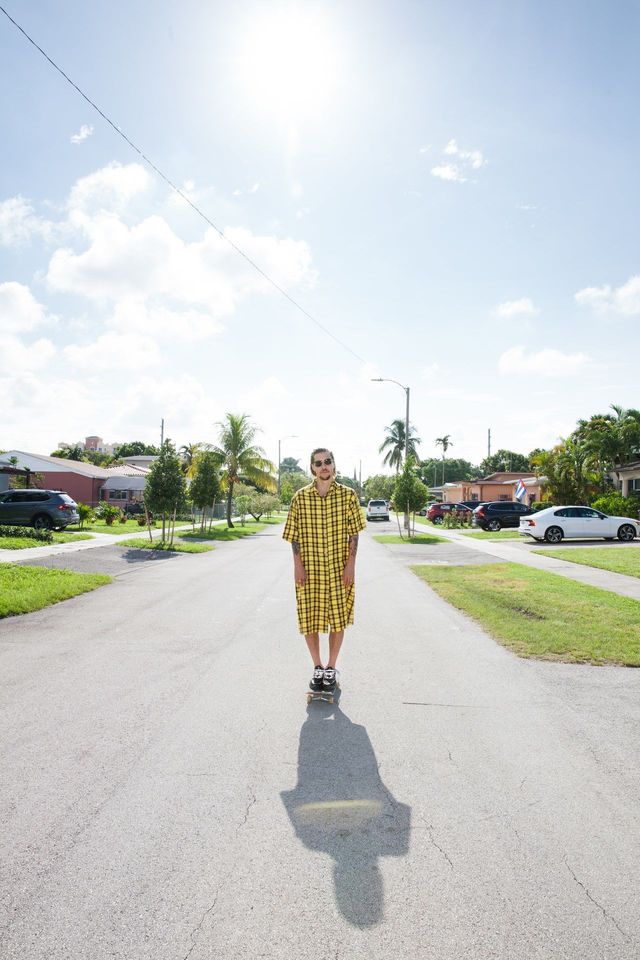 Hahn herself has been seeing a shift in how men are dressing these days, including in Post Malone. The musician continued to wear dresses since his Nirvana tribute moment, including a pert green one styled underneath a striped button-up, along with a John Deere hat that he posted on Instagram. (He captioned that image with “i am cute today okay”). “I think the mentality is shifting for sure. So now it’s like if you want to wear a dress one day, then wear a dress. Gender is becoming so fluid. What we traditionally think of as menswear vs. womenswear is also becoming fluid,” says Hahn, adding. “It just doesn’t work anymore to say guys can’t wear dresses or whatever.” They’re also comfortable. “On a summer day at a hot festival, you can get some airflow and feel the breeze,” says Hahn. A fresh breeze and breaking down gender norms? Sounds chic.