Ranking the Most Chaotic Outfits in the 2020 Holiday Movies

No matter the genre of a given holiday movie or limited series, you can guarantee that every character is going to spend the entire runtime swaddled in chunky knits or blinged out in sparkly cocktail party attire.

Your leads may be a depressed baker whose store is about to go out of business or a cheery mechanic whose father is the town's meanest landlord, but when the calendar hits December and the camera starts rolling, they're busting down the doors of a festive Christmas closet and turning looks that are a feast for the eyes, if impractical for everyday life.

Generally, costumes in holiday movies fall into four categories: Everyone in this Town is Going to a Victorian Murder Mystery Dinner, Disaster at the Pattern Factory, A Sequence of Sequins, and Have You Heard of SWEATERS? They're all always a peculiar delight but the ensembles hit a little differently this year, when our real life go-to looks are "Zoom office party" on top and "cry for help" on the bottom. It's for this reason that, amidst the picture perfection of the majority of 2020 holiday onscreen clothing, my eye was drawn to the characters whose aesthetic more closely aligned with our present reality: chaos but make it festive. Here's the best of the Christmess!

I don't think Langston (Troy Iwata) wears actual clothes for the entirety of the series, and that's reason enough to celebrate this hygge hero. We meet him in repose, reclining on the sofa before dashing into bed with his holiday hookup Benny (Diego Guevara). From that point on, Langston's lewks boil down to two categories: comfortable and coital. Costume designer Cristina Spiridakis has this dude dressing like Sandra Bullock in While You Were Sleeping, a character who spends the entire film fooling people into thinking that a) she is engaged to Peter Gallagher and b) that the pajamas she's wearing are actual clothes. Langston takes up this mantle ably, swanning into rooms in an assortment of lounge pants, bathrobes, and draped afghans. While his younger sister Lily (Midori Francis) is dashing around the city on a quixotic love quest, Langston makes it clear that his intention is to stay bed-adjacent and let love come to him. A icon for our time. In a film that races, full speed ahead, through every major holiday as Sloane (Emma Roberts) and Jackson (Luke Bracey) play-act the roles of each other's plus ones at a shocking number of theme parties, the aftermath of Jackson's pirate Halloween costume is hardly the most chaotic thing onscreen. But it warrants inclusion here because, well, it's a Halloween costume in a Christmas movie. Also, costume designer Helen Huang does masterful work toeing the line of ridiculous and romance-novel-cover sexy with this blousy pullover. True chaotic neutral. 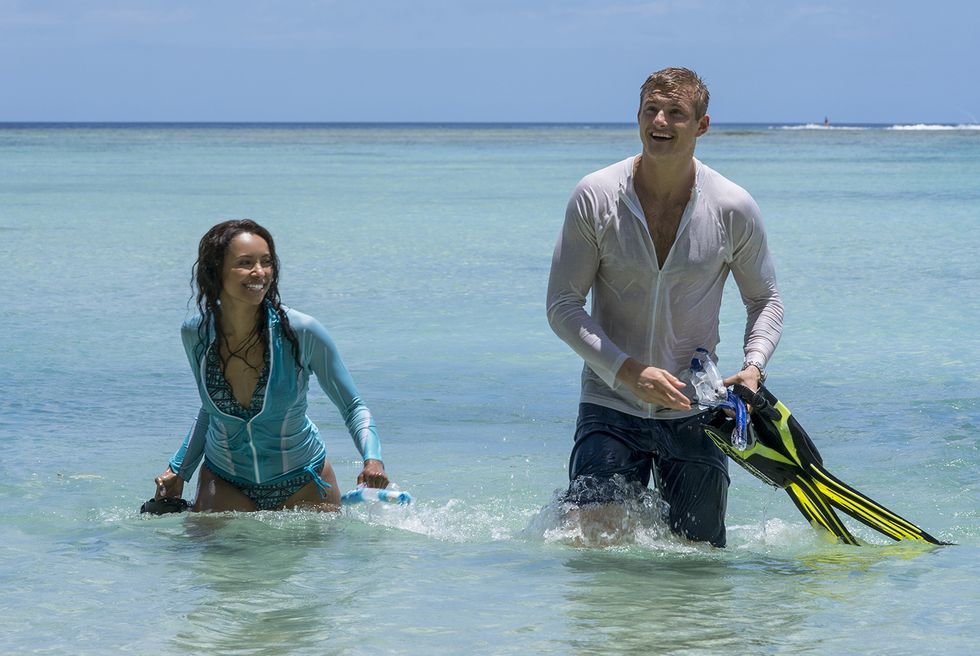 Yes, this season we get two pirate blouses in Christmas movies, when for years we suffered through zero pirate blouses in Christmas movies. Yes, we can! "You ready to go Christmas snorkeling?" Andrew (Alexander Ludwig) asks Erica (Kat Graham) in the tropical-set Operation Christmas Drop, as if that is a thing everyone does all the time. As a singer croons "I love Christmas in the snow" on the soundtrack, the two soon-to-be lovers wade into crystal clear waters in surprisingly chaste ensembles by costume designer Glenne Campbell. It's a feast of visual and aural non sequiturs made all the more delightful by the fact that Andrew is dressed for casual Friday on the Jolly Roger.

12 The Matching Pajamas in Dash and Lily The two most chaotic and yet most powerful forces at holiday time are matching festive pajamas and mandatory family fun; this picture gifts us both! While Langston certainly rocks more adventurous patterns in other scenes, the sheer volume of red plaid puts this choice over the top. Speaking of choices! Costume designer Michael Wilkinson has the citizens of Cobbleton high-key dressing in this musical. While holiday movies are notorious for putting characters in outrageously twee outerwear, Keegan-Michael Key's mischief frock is in a category all its own. We've got buttons! We've got a top hat! We've got a cape over a coat! Is this look chaotic? Yes. Do I want to add it to my wardrobe immediately? Also yes. Abby (Kristen Stewart) makes the deranged but correct choice to go to a drag bar and get drunk with her girlfriend's ex-girlfriend Riley (Aubrey Plaza). It's here we're treated to the brilliantly idiosyncratic musical stylings of Jinkx Monsoon and Ben De La Crème, the latter rocking what is either a festive romper or two tree skirts stacked. Only costume designer Kathleen Felix-Hager knows for sure. You will not believe this but Duchess Margaret (Vanessa Hudgens) and her double Stacy (Vanessa Hudgens) have yet another look-a-like: the devilish party girl Fiona (guess who)! Costume designer Francisco Rodriguez-Weil lets us know that Fiona is up to no good and also a lot of fun in non-princess-switching circumstances by putting her in gloriously over-to-top looks, like this fascinator that should have received its own billing. Extra points for having matching henchpeople dressed in ASOS New Year’s Eve clothes. Just perfect chaos all around. Now this is how you upstage a duchess.

8 Dolly's Angel Attire in Christmas on the Square I will never stop being obsessed with Provi Fulp Ramphal's costume for the angel, which seems to be a combination of "Successful Televangelist," "Your rich aunt's third wedding dress," "Oh, an angel probably," and "Actually Dolly Parton Quite Literally." Kristen Chenoweth's Aunt Susan, who never met a pattern she didn't like and buy in every color, shows up in Holidate in a Playboy Bunny costume, an assortment of festive blouses, and a Mrs. Claus dress, but it's this Fourth of July one-piece that truly announces "We are going all in, folks! Merry Independence Day! Don't forget to vote in the Georgia runoffs!" Jeronicus Jangle (Forest Whitaker) spends the majority of Jingle Jangle officially Going Through It and what better way to announce your emotional spiral than with a fashionable fuzzy coat? The colors are muted but still complementary; his fussy tie pops. This look strikes the perfect balance between eccentric Christmas gear and desaturated frump wear. A masterpiece! One thing you need to understand about this movie is that Goldie Hawn and Kurt Russell play Santa and Mrs. Claus and they’re dressed like the two merriest people at a Harley convention. But we’re not here to talk about them, but rather their nemesis in the film…who is also seemingly at a Harley convention. What feels most chaotic to me about this choice costume designer Pierre-Yves Gayraud makes for Julian Dennison's evil elf is that it finds a way to do sinister festively. A desaturated maroon and a green tint to the black leather and we've got ourselves a Christmas villain! FIONA IS NOT PLAYING AROUND HERE! What's great about this ensemble is that, like Belsnickel's, it clearly communicates "total villainy" while retaining the air of the holidays. In this case that's achieved by encasing Vanessa Hudgens in silver including an actual cage for a neck. Is it a choker or is she wearing an entire chainlink fence? The answer is yes. 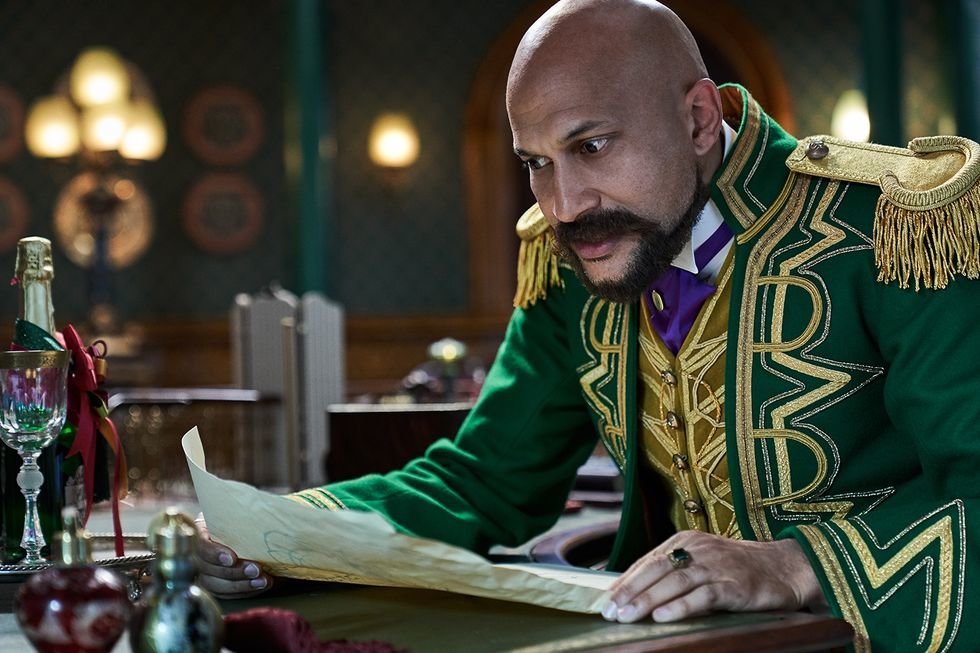 The choice to dress the villain in this movie like Harold Hill in The Music Man, complete with epaulets, and offer absolutely no explanation for it? Perfect. Gustafson is a toymaker who works in a factory; he has no use for any of this clothing. The inconvenience alone! As if this isn't already a lewk and a half, Gustafson also sports a floor-length cape. Completely impractical but nonetheless a Christmas serve. Or, a sleigh slay, if you will. Abby's understanding of "dressing heterosexually" is to put on a rapidly collapsing ensemble that can best be described as "lounge singer on a bender." When paired with Aubrey Plaza's chic power-lesbian suit, they look like a couple of detectives trying to solve the mystery of why Abby is with Harper in the first place. This exquisitely tailored costuming is the pinnacle of queer chaotic good.

1 Dolly's Disguise in Christmas on the Square The first image we see in Christmas on the Square is Dolly Parton's angel in disguise who is supposed to be a woman down on her luck but is giving huge Grizabella vibes. There are roughly 15 layers here and as many different textiles. There are choices and then there are CHOICES. The Grizangel looks as comfortable as Dash and Lily's Langston but, with her subdued full face of makeup and slightly unkempt wig, wants us to know this is a serious yet glamorous matter. The movie hasn't even properly begun and there is already so much going on. A chaotic Christmas miracle as only Dolly could deliver.