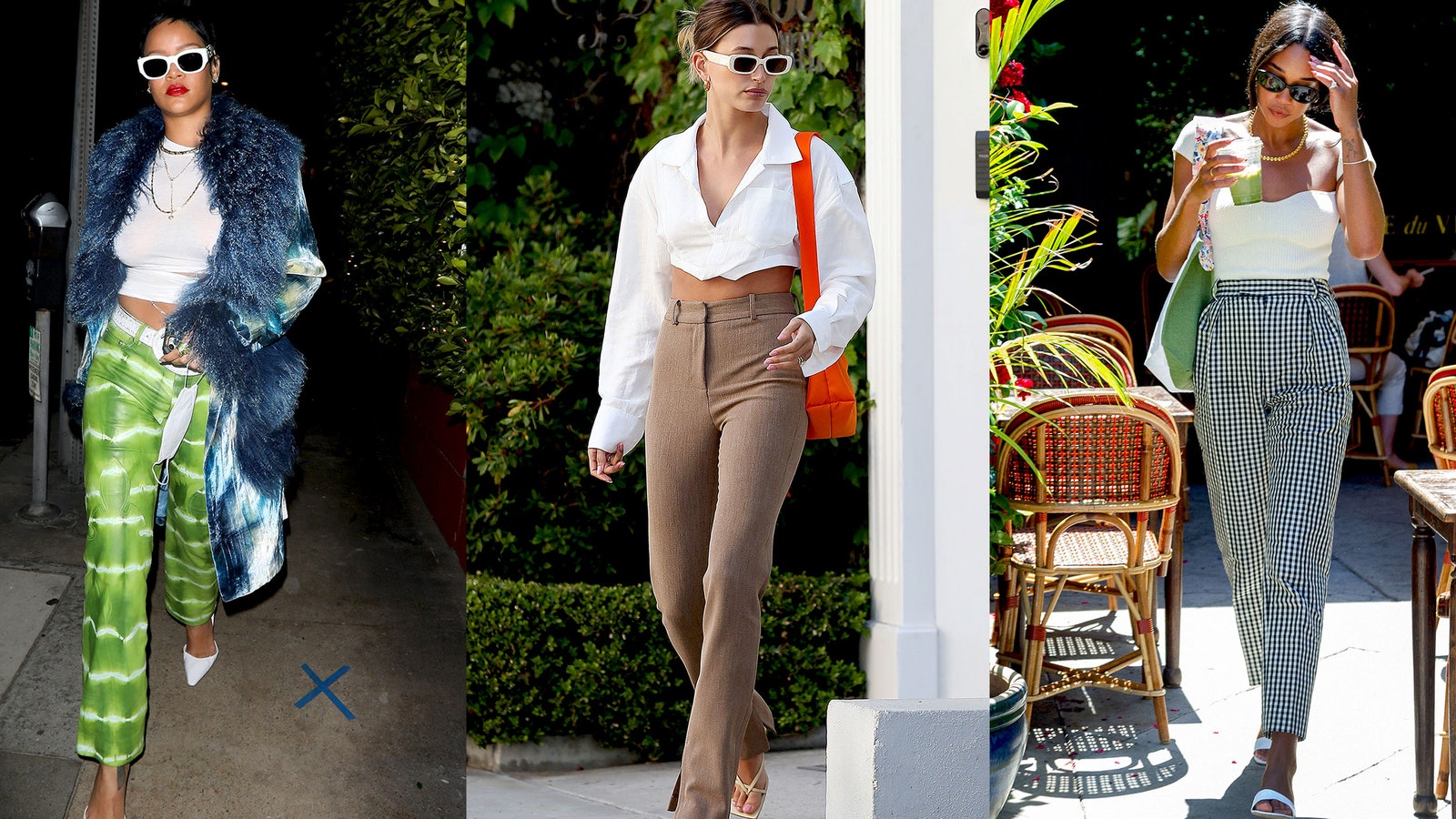 The classics are such for a reason, but celebrities have been updating their vintage finds and wardrobe staples.

As celebrities stepped out last week, they did so in tried and true wardrobe staples. After all, the classics are classics for a reason. Some looked to the past, pulling out designer fare from the early aughts. Rihanna made her nightly dinner trip to Giorgio Baldi in a tie-dyed coat from John Galliano’s fall/winter 2000 collection for Christian Dior and a pair of retro Versace shades. Others opted for new pieces that updated familiar silhouettes. While in New York prepping for her spot on Saturday Night Live, Miley Cyrus wore an unexpected, oversized interpretation of the pinstripe suit by Junya Watanabe. A standout from the designer’s fall/winter 2021 collection, the look was a departure for Cyrus.

Little black dresses are always in, but knit versions have been trending lately. At Global Citizen’s Vax Live Concert, Selena Gomez took to the stage in Victor Glemaud’s wool maxi dress. Body-hugging yet cozy, Glemaud’s jacquard dress was in line with the sleek fashions Gomez has been gravitating towards. Its high contrast design complemented both the star’s Magda Butrym polka-dot mules and her brand new platinum blonde hairstyle. Days later, on Late Night with Seth Meyers, Jodie Turner-Smith captivated in Azzedine Alaïa pleats that took the LBDs in a romantic direction.

Gingham ankle pants and cap-sleeved tops are as traditional as it gets, but Laura Harrier made the pieces feel freshly relevant. The actress took Khaite’s knit top and a pair of checked pants for a spin while grabbing a green juice in Los Angeles. Modernized via Sophie Buhai chains and a festive floral tote, Harrier’s 50s inspired look was a winner. Hailey Bieber’s cropped white blouse from Jacquemus and high-waisted trousers from Musier Paris were similarly chic. Still, her fluorescent orange crossbody bag from The Attico nearly stole the show.

There were a few flights of fancy this week. On Instagram, Kate Hudson posed in a dreamily patterned pre-fall dress from Khaite that was pure romance. While promoting the final season of Shrill, Aidy Bryant wore Simone Rocha’s vivid sapphire brocade mini-dress. Everything from Bryant’s playful platform sandals to the ribbon bow in her hair was adorable, but the twee touches only added to the whimsy of Rocha’s design. 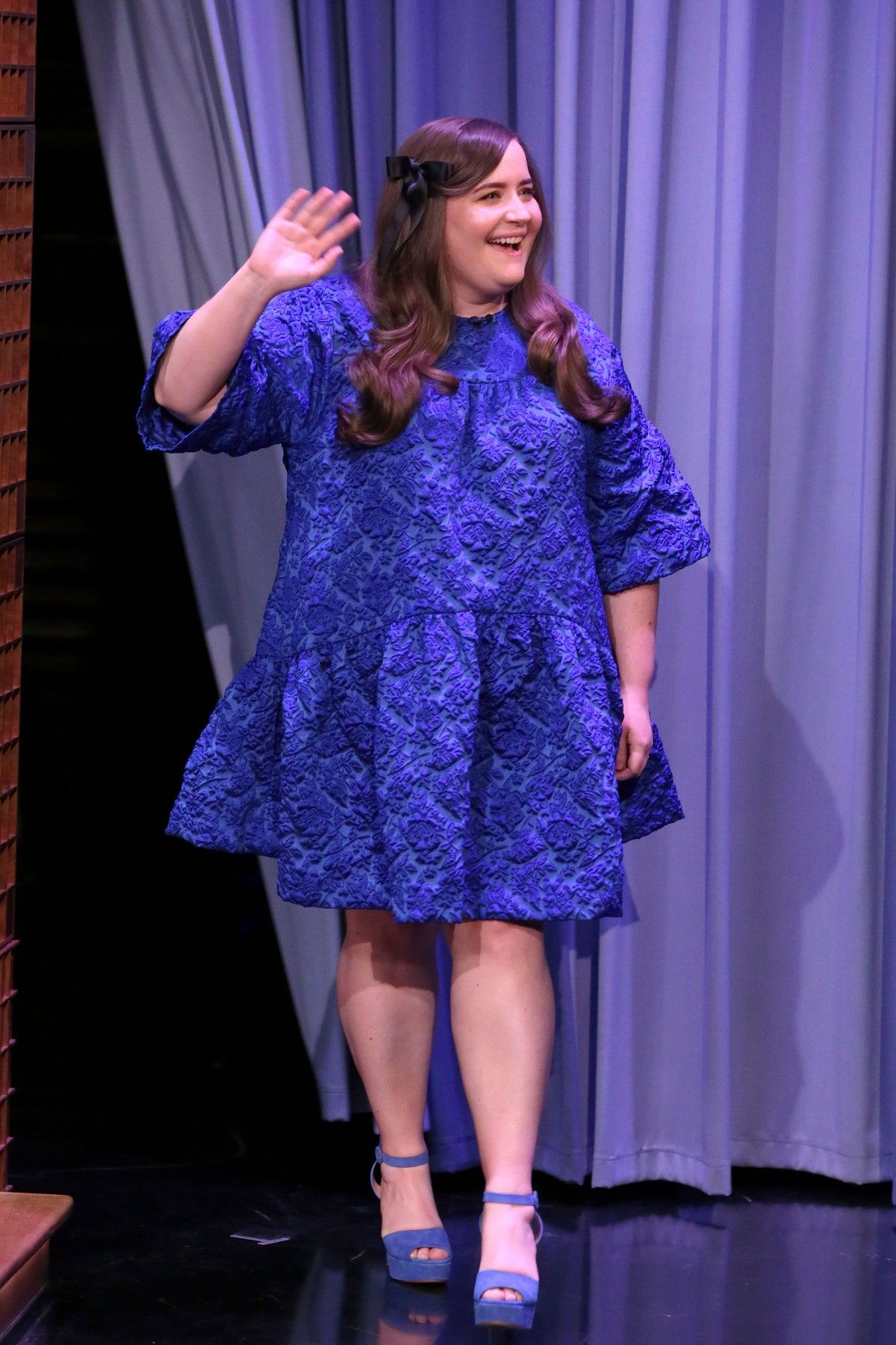 WHO: Aidy Bryant
WHAT: Simone Rocha
WHERE: The Tonight Show with Jimmy Fallon
WHEN: May 4 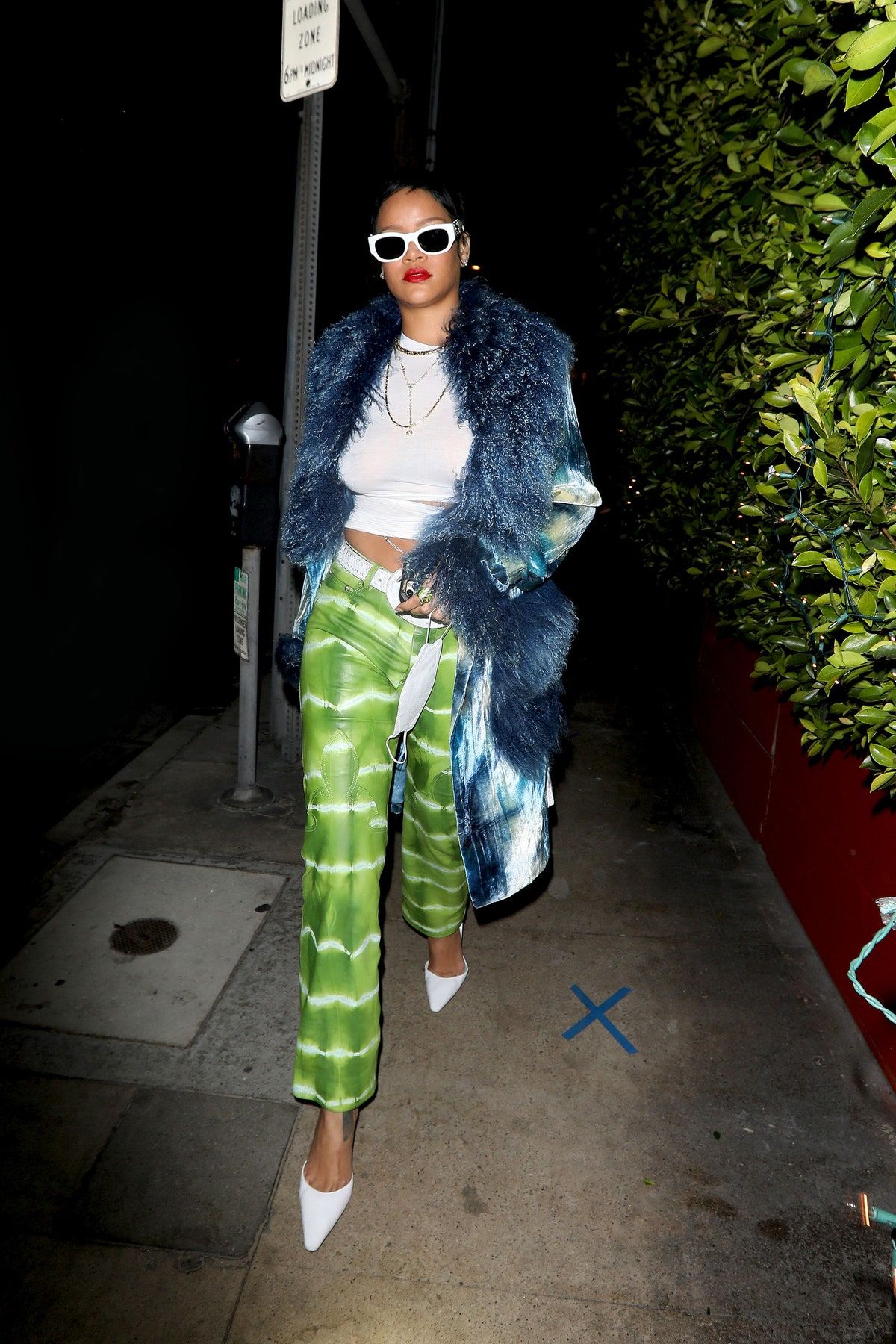 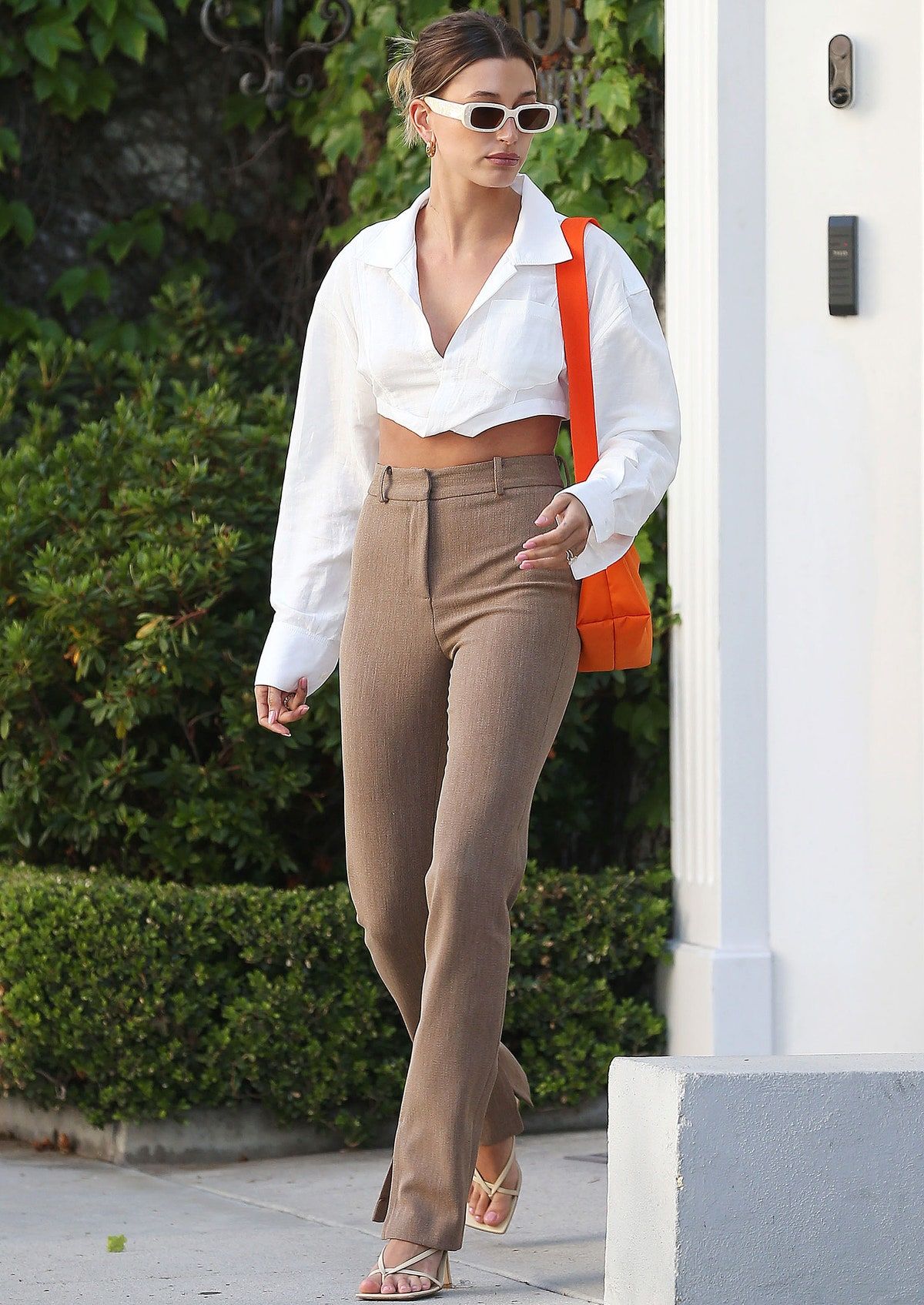 WHO: Hailey Bieber
WHAT: Jacquemus blouse, Musier Paris pants, The Attico bag, Bottega Veneta sandals
WHERE: Los Angeles
WHEN: May 4 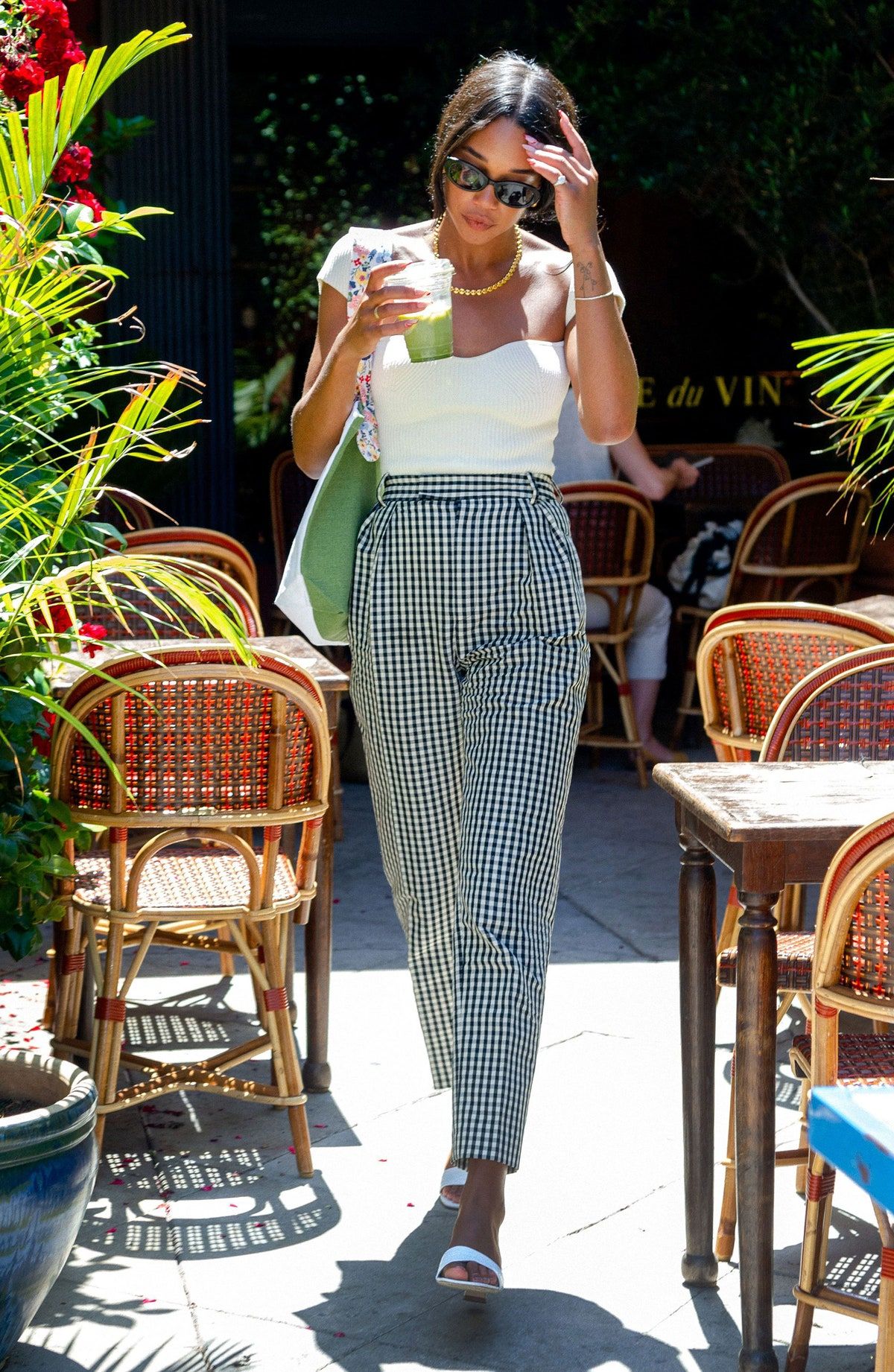 WHO: Laura Harrier
WHAT: Khaite pants, F.E.E.D. bag, By Far Sandals, Philo sunglasses,
WHERE: Los Angeles
WHEN: May 4 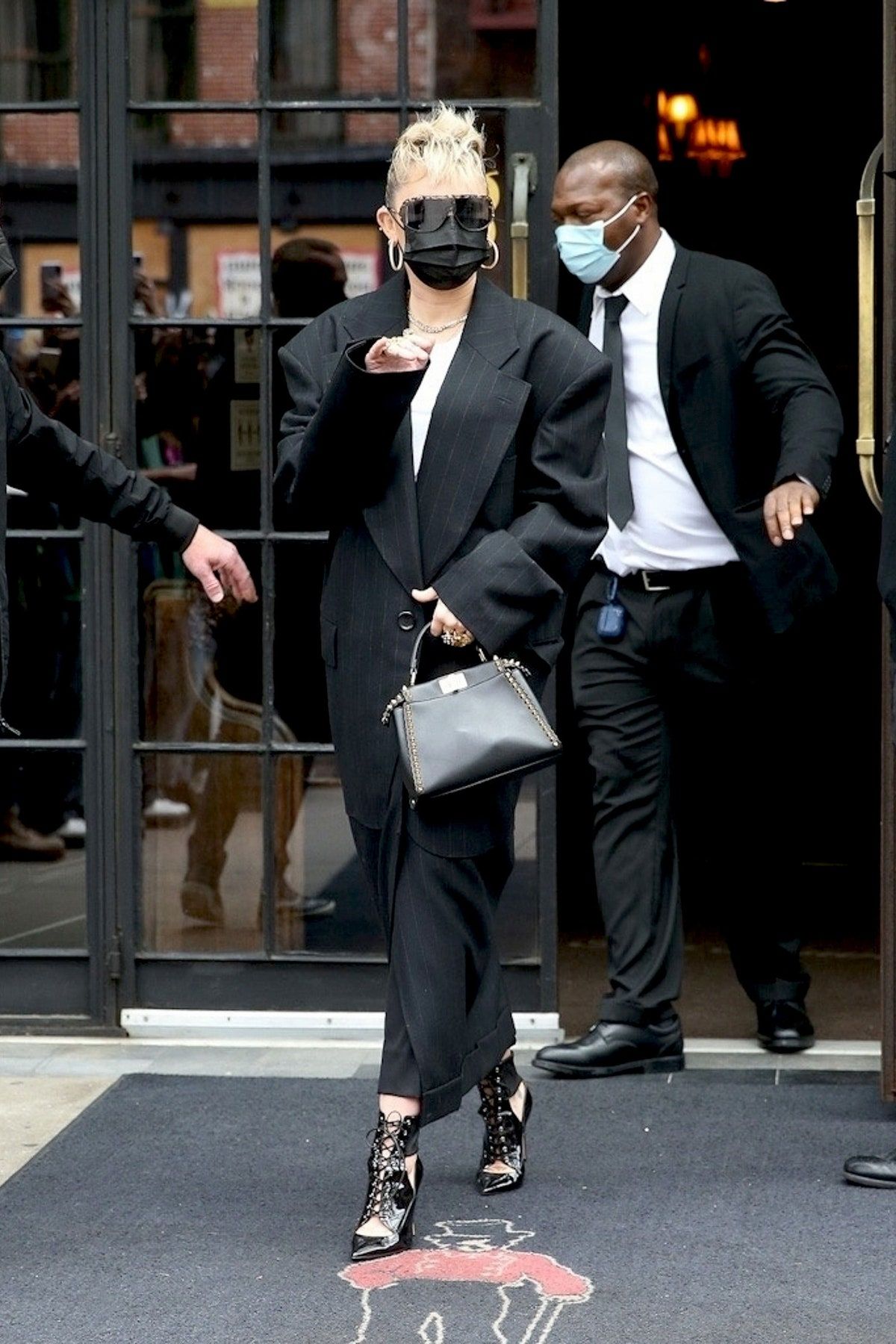 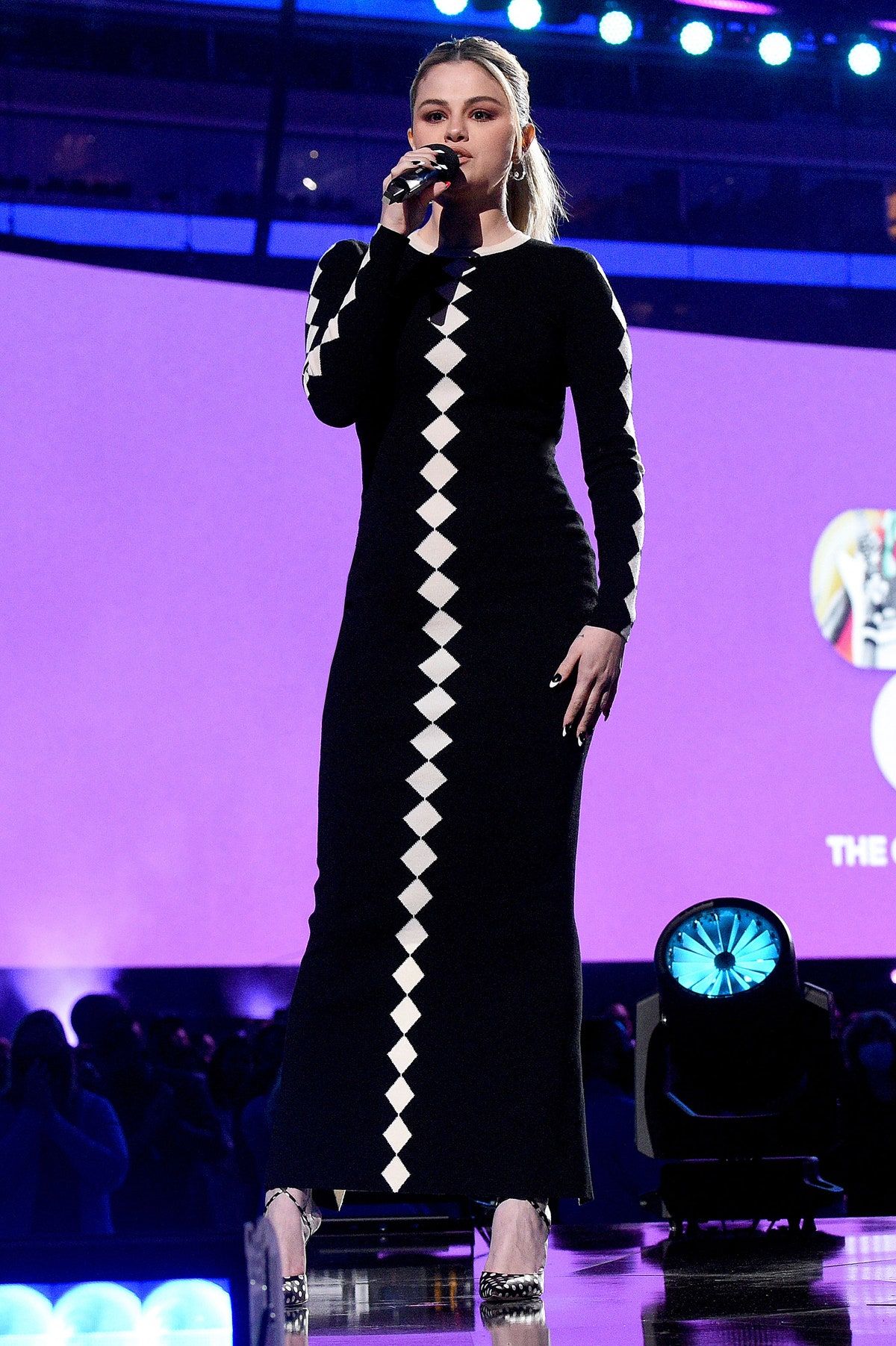 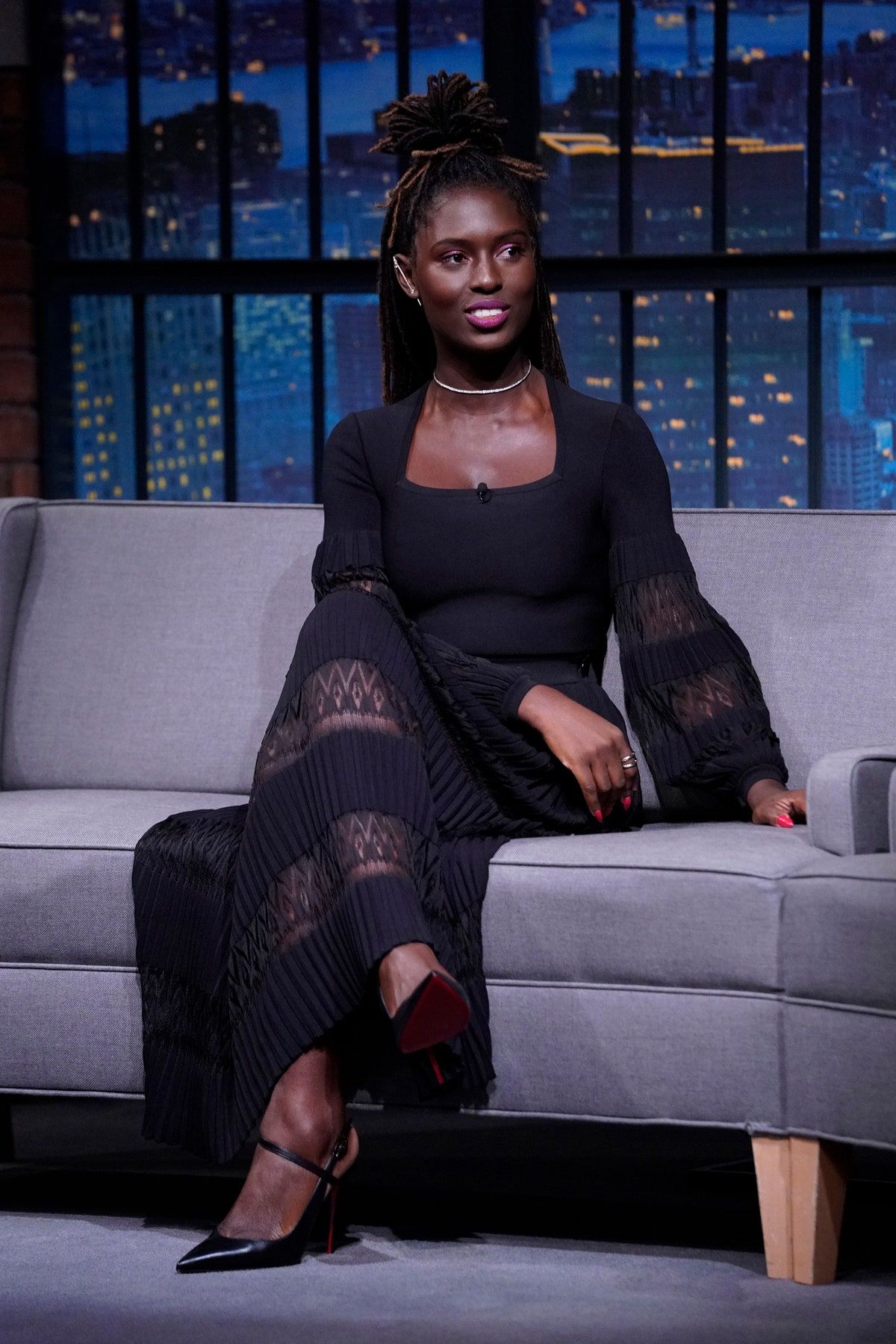 WHO: Jodie Turner-Smith
WHAT: Azzedine Alaïa
WHERE: Late Night with Seth Meyers
WHEN: March 4 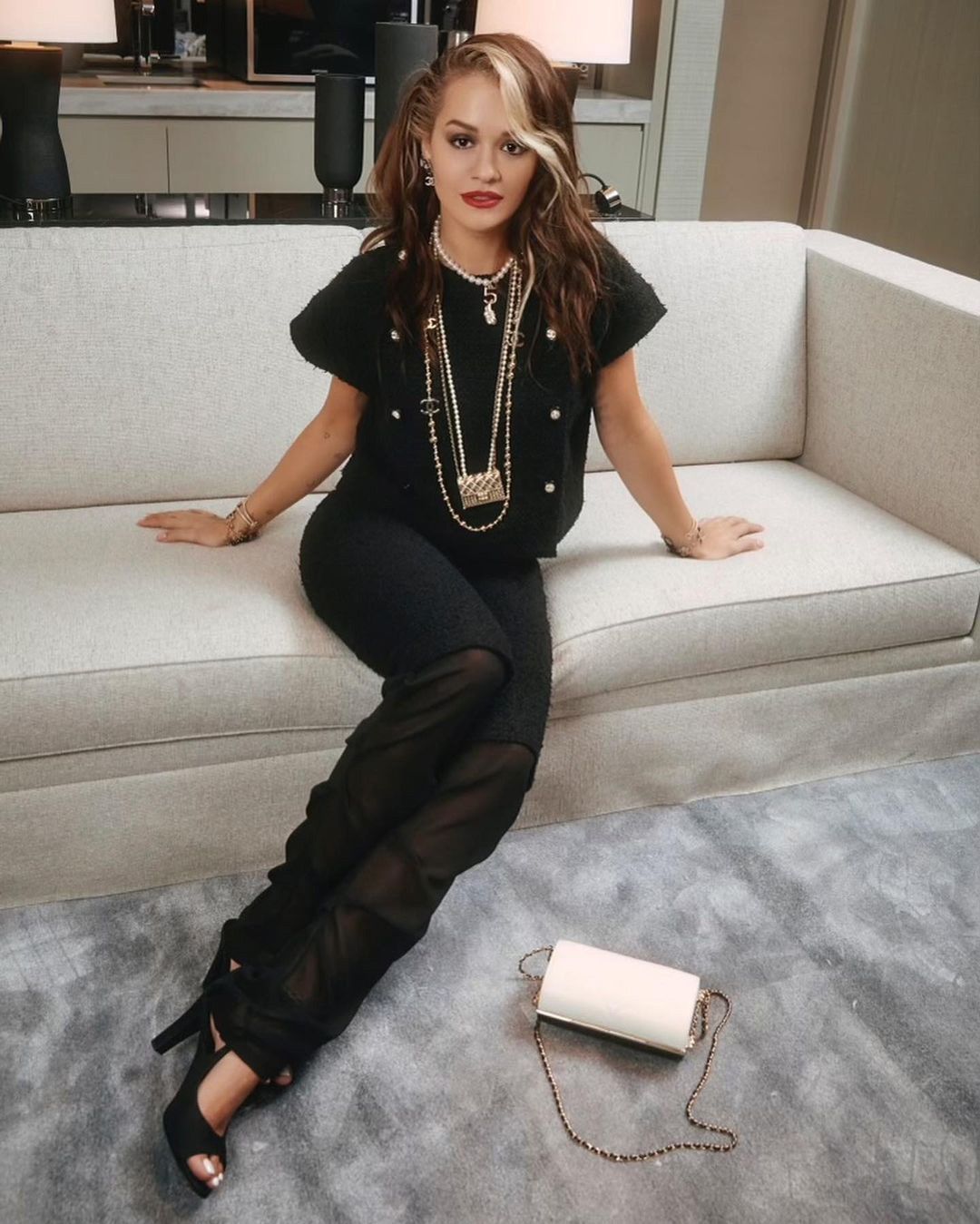 WHO: Rita Ora
WHAT: Chanel
WHERE: Chanel Celebrates No. 5 Dinner in Sydney
WHEN: May 5 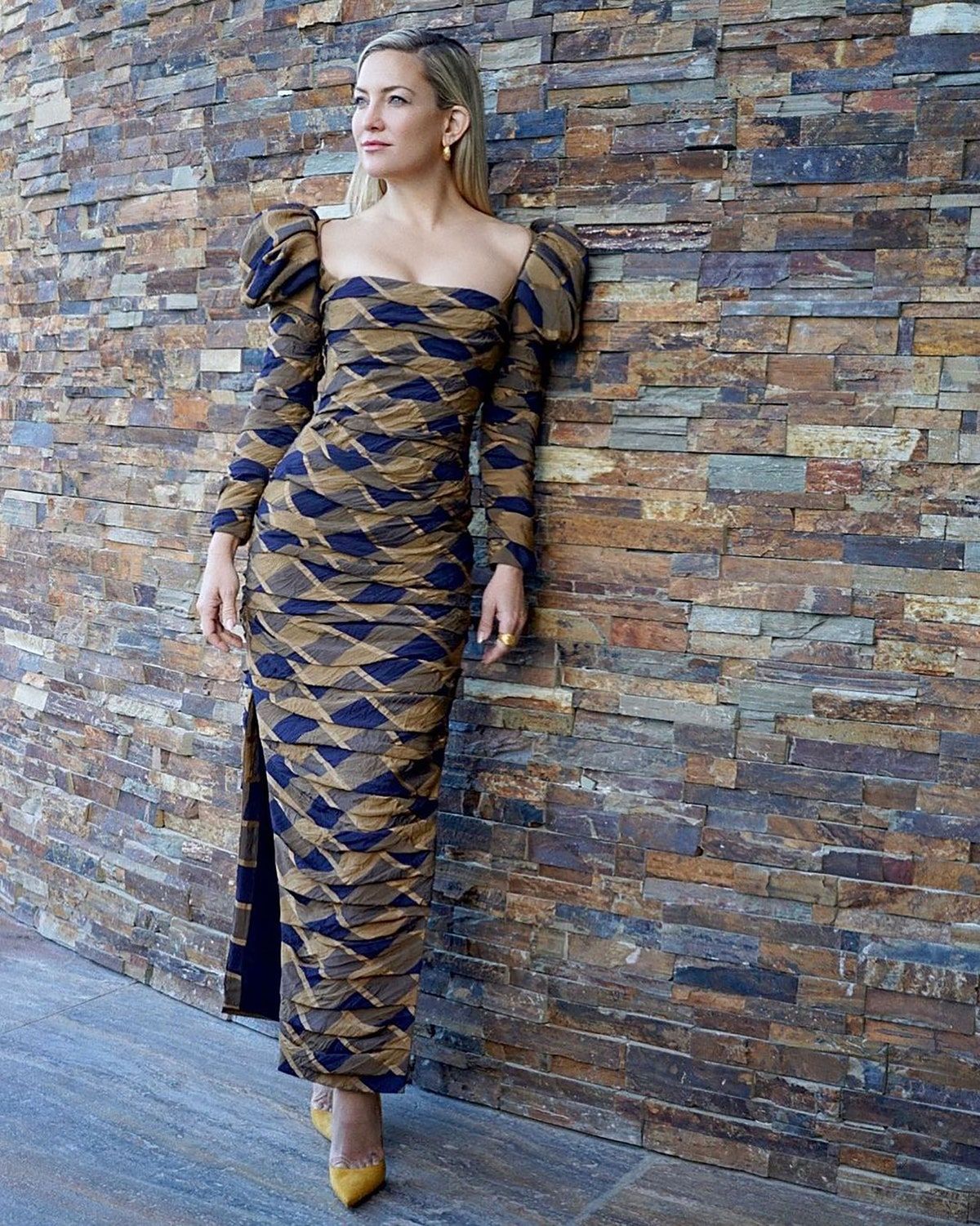 WHO: Kate Hudson
WHAT: Khaite
WHERE: Instagram
WHEN: May 7 WHO: Kylie Jenner
WHAT: Ottolinger
WHERE: Los Angeles
WHEN: March 7