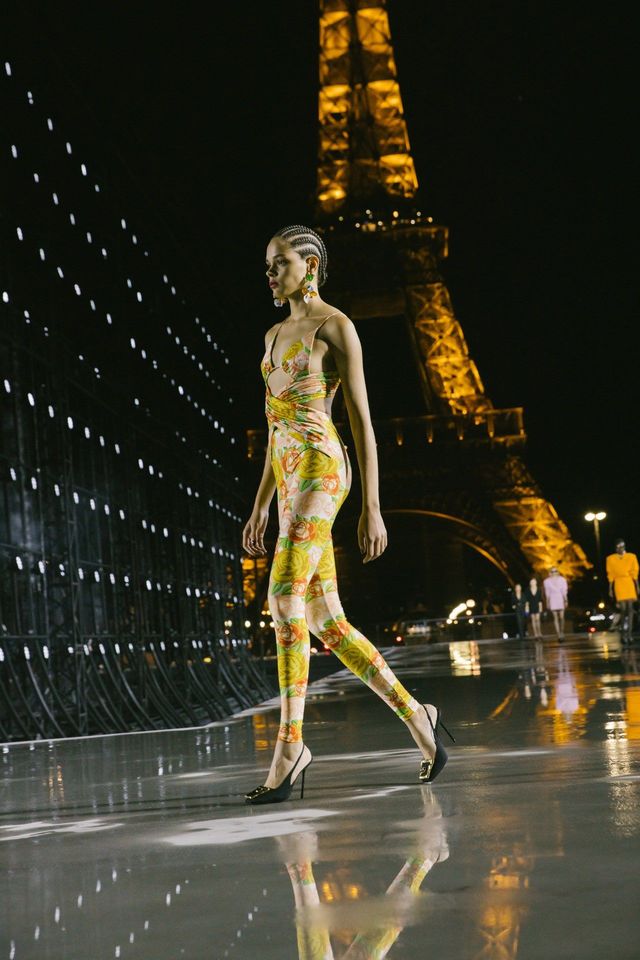 Since COVID upended everything, Anthony Vaccarello had chosen to present his Saint Laurent collections via the medium of film, using spectacular natural settings, from sand dunes to glaciers, as his backdrops. Not so tonight. We’re back to Paris, baby! Vaccarello’s powerful and uncompromising spring collection was once again shown within twinkling distance of the Eiffel Tower. (A roar came from the crowd when it lit up.) Still, he hasn’t entirely given up on the idea of drawing on the elements. For one thing, the show was held outside, on a cool darkening evening, and for another, there was the impossible to miss thundering waterfall which cascaded down the pyrotechnic light display at the finale.

That wasn’t the only force of nature Vaccarello had on his mind. Central to this collection was the incomparable Paloma Picasso, a Renaissance woman who, in her heyday, was as happy in a branché nightclub as she was in an artist’s studio. Or, for that matter, a designer’s atelier: Years ago, Pierre Bergé acknowledged Picasso’s pivotal role in shaking Monsieur Saint Laurent out of the lethargic and moribund world of haute couture, electrifying him into taking new risks. That role was somewhat lost to history until tonight, when Vaccarello celebrated her legacy in audacious and fabulous style. He brought the sketch of her trademark look—the dark hair, the scarlet lips, the masc/femme contrast, the clash of the opulent and the low down—firmly into today. “She projected a glamorous toughness,” Vaccarello said at a preview a few days before the show. “And it was a way for her to move through the world and hold her own.”

Much of this collection wrested on masculine-inflected tailoring, pace Picasso. Vaccarello’s jackets, with their broad shoulders which took months to perfect, were divine, and made even more so by the proportional juxtaposition of their three-quarter-length sleeves; the precision of the shape, said Vaccarello, was “to fix all those oversized jackets I am tired of seeing on Instagram; just to show what a well-cut jacket is.” Sometimes this tailoring was worn with lanky high-waisted jeans or tight pants cut from spandex, other times it morphed into jumpsuits, yet it was always accessorized with Pop Art bright leather gloves, a sunken galleon’s worth of ritzy jewelry, and the Tribute platform newly reborn in black patent leather. (BTW: Jeans and jewels are looking great again; ditto those platforms.)

Elsewhere, Vaccarello playfully, naughtily even, riffed on propriety. An exquisite small fitted jacket, embellished with gilded buttons, and worn with a slim ankle length skirt, would appear, and then out in stark contrast would stride a second-skin jumpsuit with a draped décolleté, the couture-like folds and twists of fabric taken from ’80s dresses he found in the YSL archive. The proper suddenly got a little perverse, but in a good way; I guess it’s all down to the company you keep. Through it all, one gesture was constant: the clutch bag slipped into the waistband of the pants, something he’d seen Picasso do with a theater program in a paparazzi shot back in the day. The insouciance of that, an aristocratic bit of sartorial swagger, was the amplifier of the message of the collection: Dressed up can be casual; casual can be dressed up.

It’s easy to see why Vaccarello would be so drawn to Picasso, beyond her contribution to the house of Saint Laurent. Her refusal to toe the line in terms of her gender and her physicality was powered both by the burgeoning sexual emancipation and the rise of feminism in the ’70s. Vaccarello’s time at Saint Laurent has been marked by his desire to imagine an idea of womanhood for the house which doesn’t get mired in political correctness, or in knee-jerk conservatism.

We’ve heard a lot about the return of the body and sexiness being back these past few days. Yet it’s a conversation Vaccarello has already been having for some time. He has been retooling the famed seductiveness and sensuality of Saint Laurent for a generation which thinks anew abouts its physicality, its sexuality, its gender. The celebration of someone like Picasso’s empowered and unapologetic sexuality is a way for Vaccarello to underscore the cruciality of women having absolute agency over their own bodies, particularly at a time when all too many challenges are coming along. It’s not always an easy line to walk, but that’s a message which will linger long after the lights are turned off on the runway, and the last drop of water has fallen onto it.