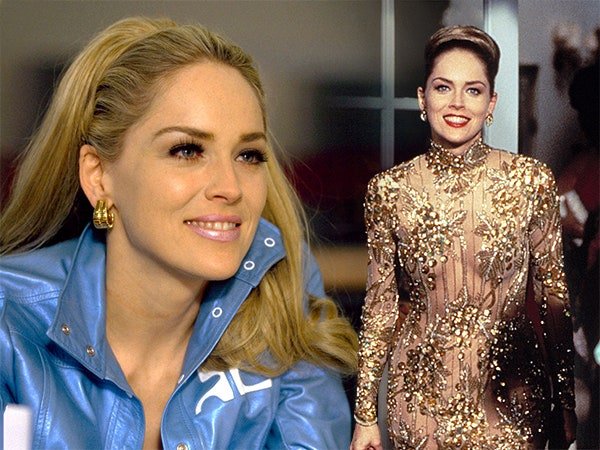 Sharon Stone on the Unforgettable Fashion of Casino, 25 Years Later

For most actors, the finer details of a character’s wardrobe from 25 years earlier would likely be lost in the fog of memory-particularly for someone with a career as prolific and wide-ranging as Sharon Stone.

When we connect over the phone to discuss the anniversary of Casino, and the iconic style of her character Ginger, it becomes evident that this is far from the case. “You won’t believe this,” she says, unprompted. “A few days ago the greatest thing happened. My son was climbing up my bookshelf to reach something, and he passed something down along the way and said, ‘Hold this.’ It turns out it was my giant binder from Casino. It has everything, all my research-from all the police reports about Geri [McGee, the real-life showgirl on whom Stone’s character was based], to the first-day call sheet, to the thank you notes from people on set.”

Not only does it speak to the painstaking preparation Stone threw herself into while gearing up for one of her most unforgettable performances, but its synchronicity with the film’s 25th anniversary feels strangely appropriate. There was always something fated in Stone’s casting as Ginger, the moll to Robert DeNiro’s casino mogul in Martin Scorsese’s 1995 Las Vegas crime epic. Coming off the back of her breakout turn as one of cinema’s most devilish femme fatales in Basic Instinct, Stone built on her reputation for playing the dangerous glamour of this archetype and transformed it into something altogether more heartfelt, as we follow Ginger’s journey from small-time hustler to casino grande dame to the drug-addled destitution of her tragic final scenes. (Stone’s powerful portrayal of Ginger’s dark inner life earned her a Golden Globe win and an Oscar nomination.) 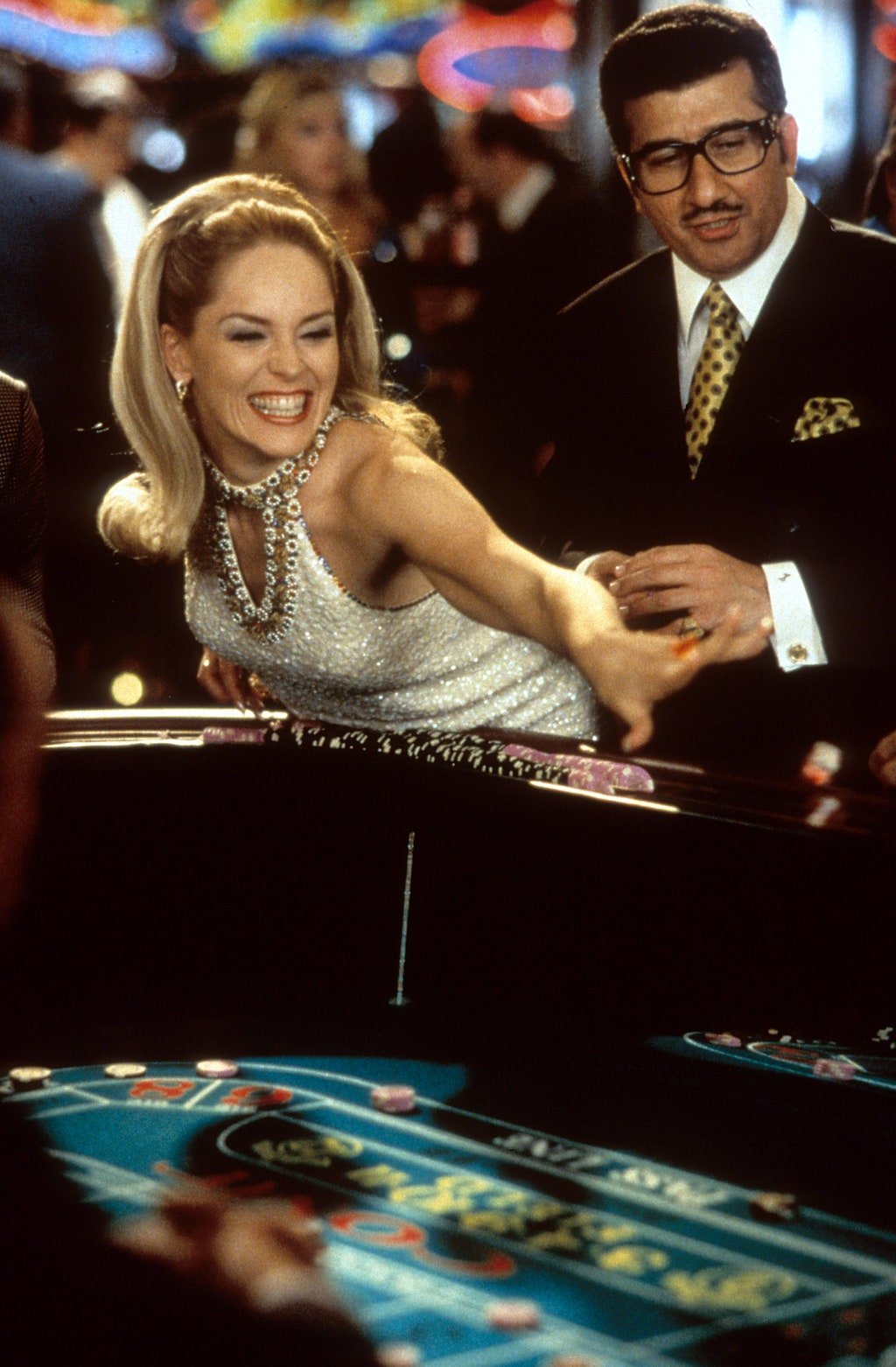 “I really felt like she came back to life through me,” Stone says of how deeply she immersed herself in the role and the ins and outs of McGee’s tumultuous life story. “I felt her presence with me quite a bit while playing that part, and by the time it got to her death scene I felt like it was one-hundred-percent her. I wanted it to be absolutely true and pure, and I wanted someone to see her death, where she was alone like that. I didn't want it to go unwitnessed, as it had been.” 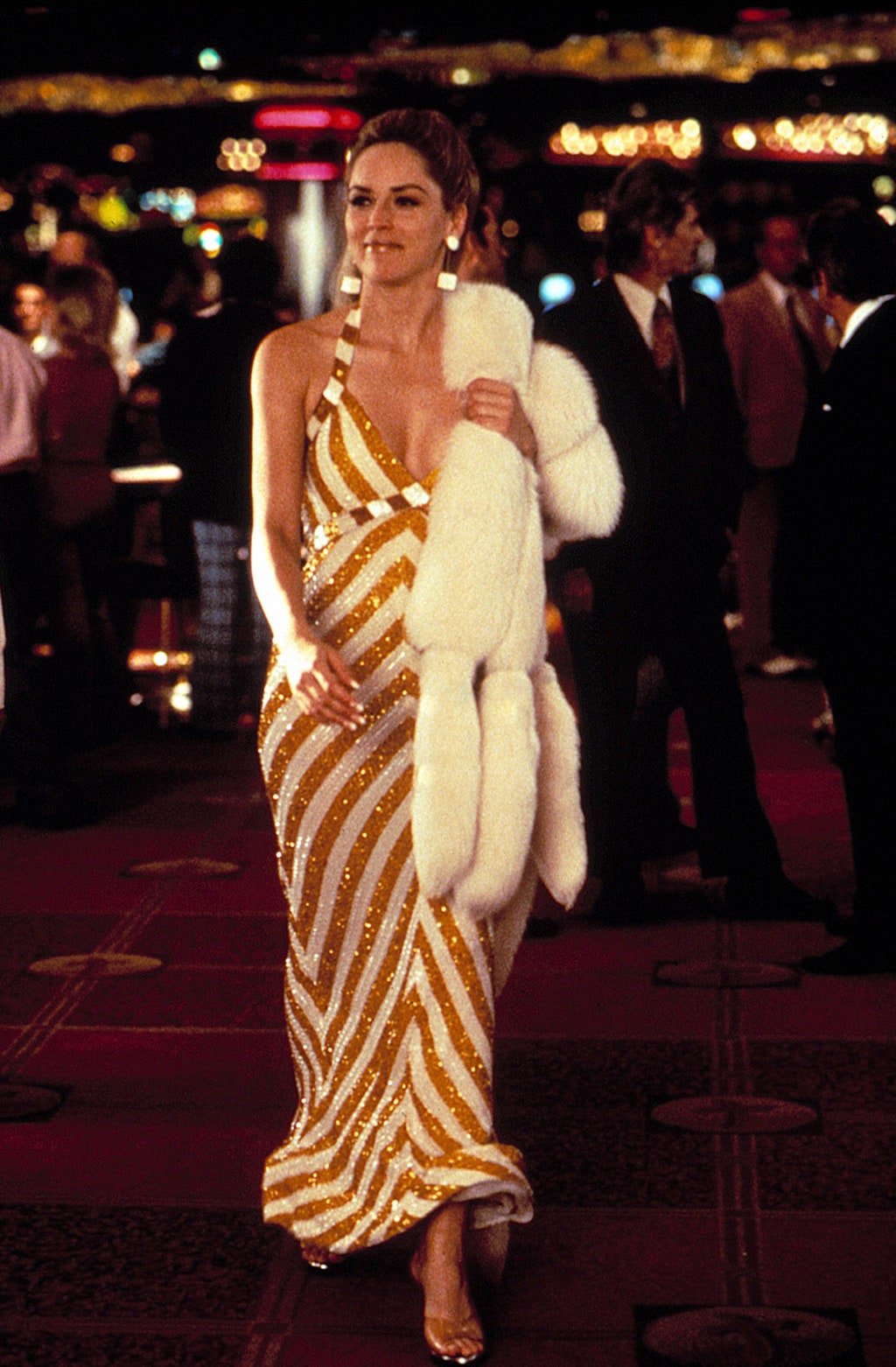 Even so, as Stone recounts her journey into the underbelly of Las Vegas nightlife while researching the role, to this day she is still forced to go off the record at points to explain just how deep she went. “I had worked in Vegas before so I knew people there, and once they knew I was making myself available ahead of the film, people started calling me saying, ‘I knew Geri. If you want to talk, I'll meet you at 1 a.m. on the corner of this and this street. I'll be wearing a blue shirt and we can talk.’ And we would meet secretly and they would give me information about her.” One anecdote she remembers hearing from a close friend of McGee’s was that her favorite song was B.B. King’s “The Thrill Is Gone”; after Scorsese asked what she was listening to all the time on set and she recounted the story, it ended up included in the film’s soundtrack. 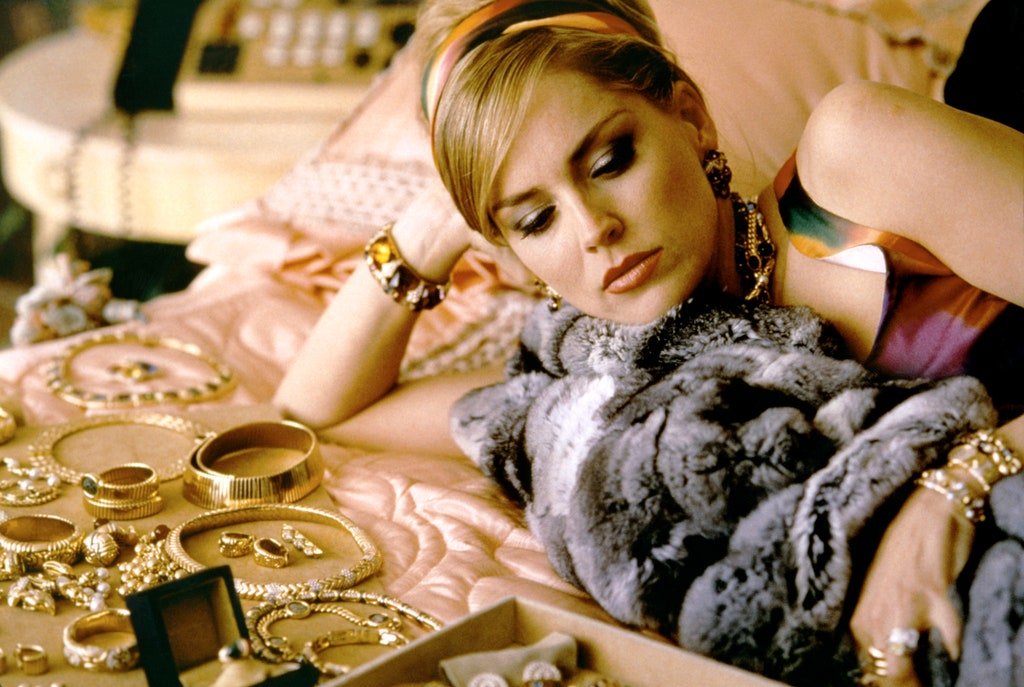 Unsurprisingly, the movie’s breathtakingly opulent fashions played an important part in Stone’s journey to inhabiting the character of Ginger with such commitment. Outfitted by costume designers Rita Ryack and John A. Dunn (reportedly working with a $1 million budget), the film is a rollercoaster ride through the gaudier corners of 1970s style, its eye-popping level of glitz matched only by the near-forensic research Ryack and Dunn underwent for the project. While they sourced plenty of clothes from vintage archives, they also took time to replicate specific looks they felt were essential to show Ginger’s eclectic tastes-in the case of a Courrèges suit she wears in a memorable scene disembarking from a plane, its recreation even involved making a replica of the brand’s logo. “If we couldn't find specific replicas, then we would create an exact replica of a costume that was worn,” Stone explains.

“Rita was an enormous help, and she really is a genius,” Stone continues. “Very few people have that kind of intense understanding of the whole amalgam of everything-how it goes with the period, how it goes with the emotional sweep of the picture. Very few people see it as a whole, and not just a rack of clothing. When you walk on set and the costumes are correct, they not only define your character but they define the interplay of your character with the other characters and where you belong on the set. It all starts to make sense.” 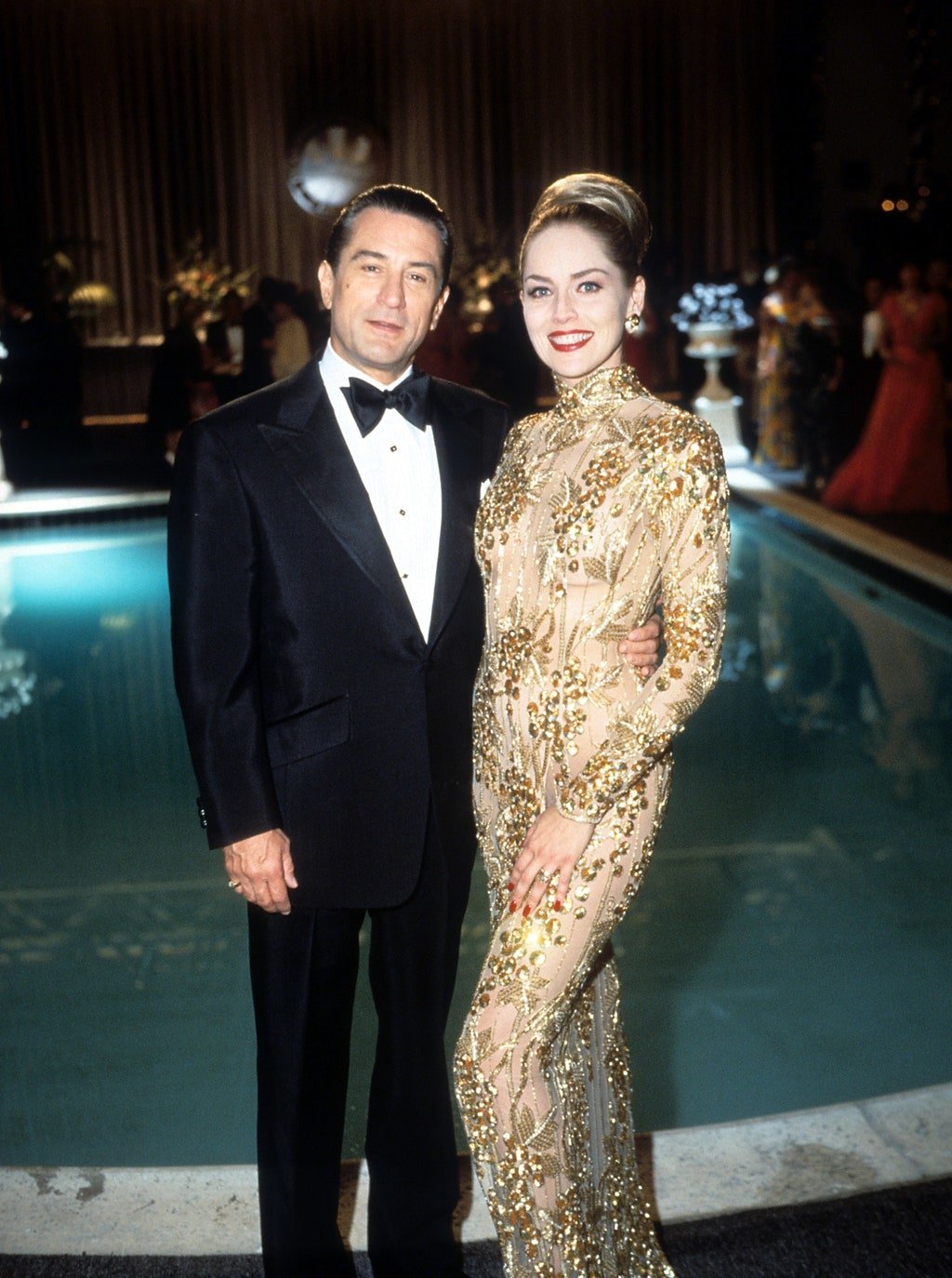 The laborious attention to detail lavished on the project from all parties involved still radiates from the screen 25 years later. Of one scene in particular, in which Stone swans through the casino in a nude, body-hugging dress dripping with gold embroidery and sequins, she remembers the accuracy of her costuming became-quite literally-exhausting. “That dress was so heavy, and those vintage sequins were made of metal, so they cut you,” Stone remembers. “It was miserable to wear, but also very exciting. Our cinematographer Bob Richardson would do these amazing long shots that would move through a room, then sweep down and around the chandelier, and then go out into the street with someone getting a cab, for example. You’d have to light your cigarette at the exact moment he passed, everything was so precise and had a hundred different elements to it. During these marvelous shots, you’re not going to complain about your freaking dress!” 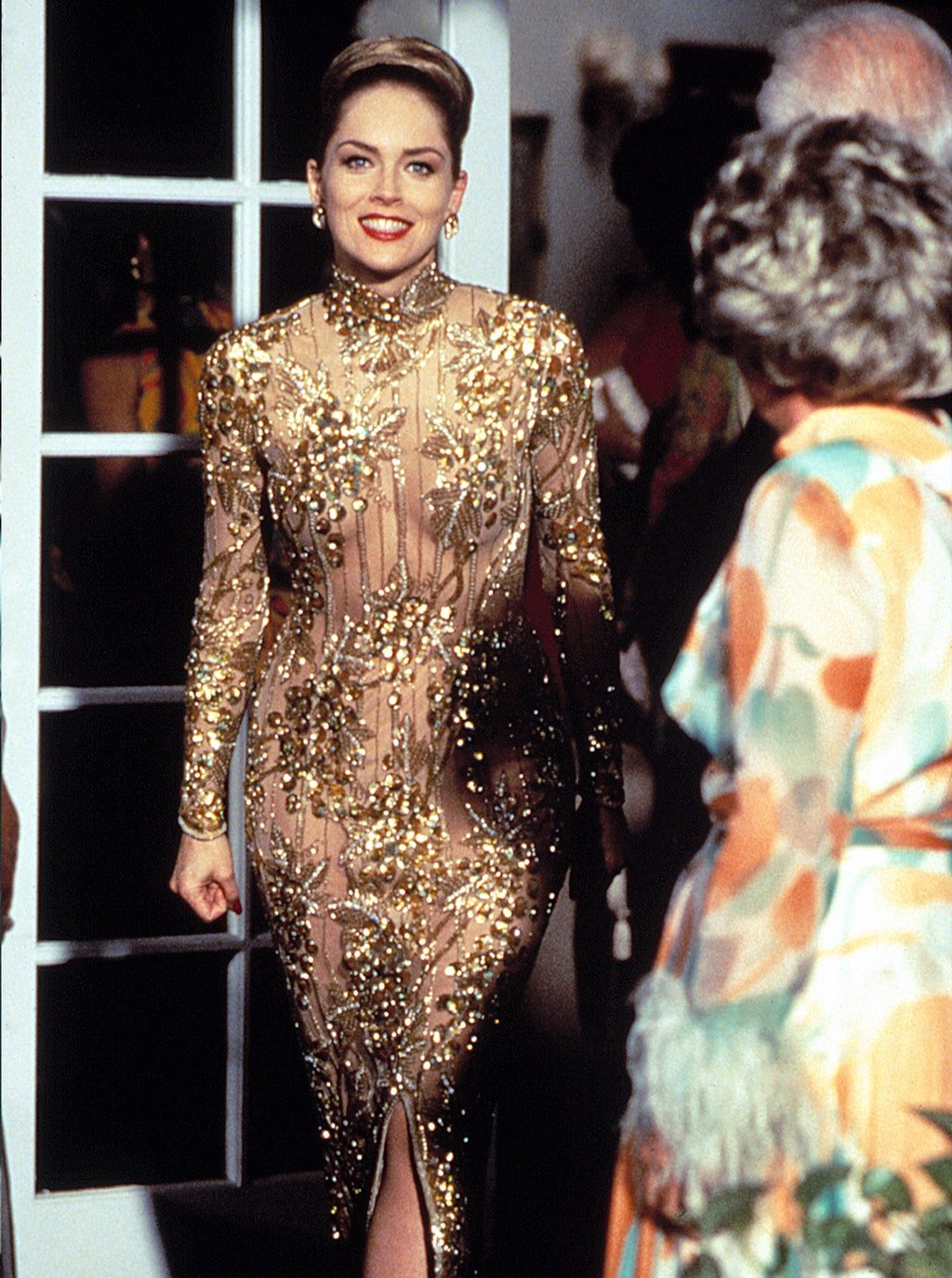 Across the course of the movie, what is equally impressive is the way in which costume plays an integral part in telling Ginger’s rags-to-riches-to-rags-again story, as her descent into depression and addiction is marked by her increasingly disheveled appearance, adding an extra layer of pathos to Stone’s heartbreaking performance. Yet even here, Stone was closely involved in how this would play out in Ginger’s look. “When Ginger took off with the character that James Woods played, I ordered these fake breasts as I felt like she would have had a haircut and a boob job during that transition. I remember Marty [Scorsese] came to my trailer and asked what that would look like, so I pulled the boobs out from under my chair and was like, ‘It would look like this Marty!’ I think his answer was just, ‘Okay.’ When I went on the set that night with the short hair and the big boobs, it was hilarious because Marty is about boob height, and I had my high heels on, so my boobs were right in his face,” Stone adds, laughing. 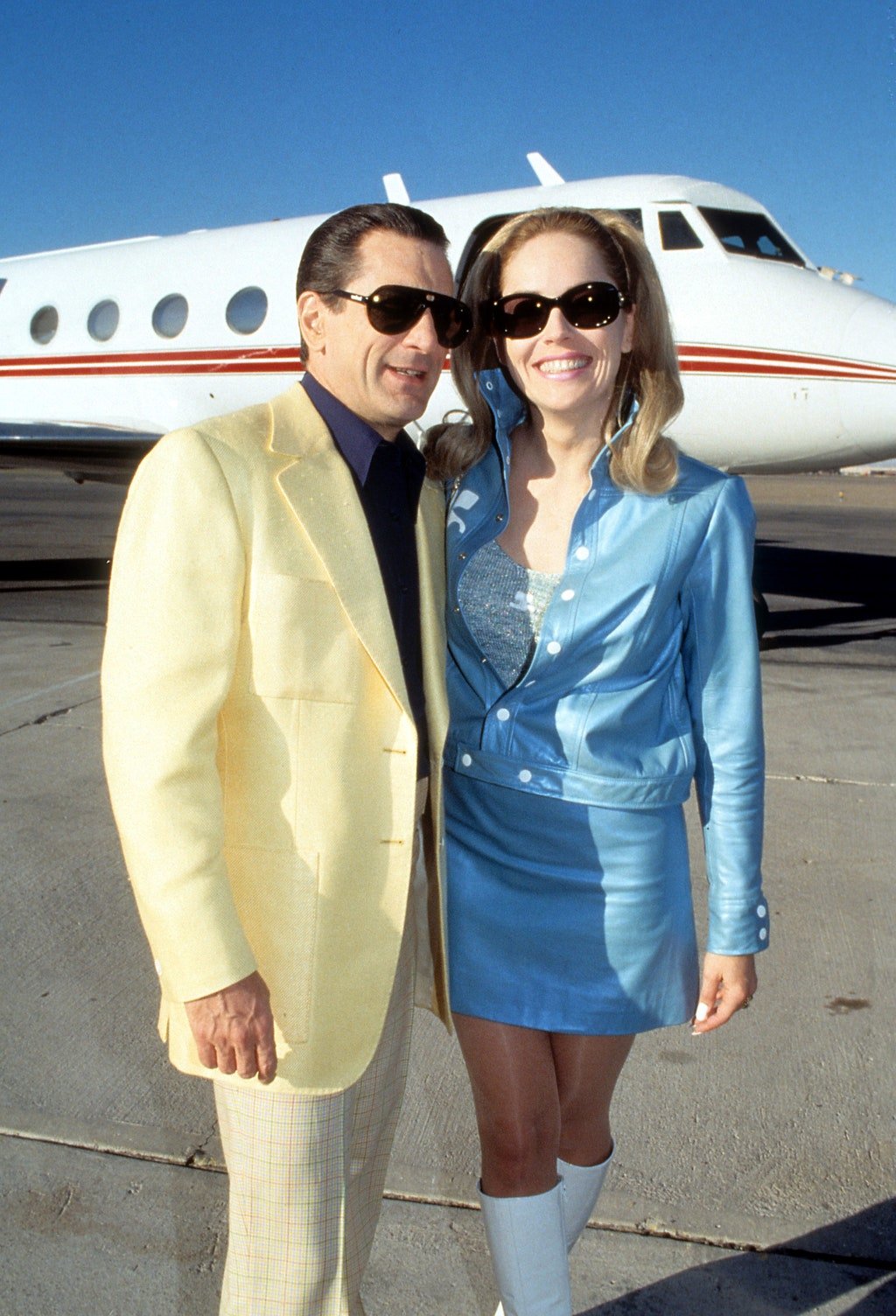 Even while acknowledging the moments of humor in putting together Ginger’s outrageous wardrobe, Stone has a respect for the art of costume design that runs deep. But, then again, she would know better than anyone how an iconic on-screen moment can change the way a garment is perceived forever in the public consciousness. (Has anyone ever looked a white skirt suit the same way again after Basic Instinct?) In a 2018 interview with Vanity Fair, Stone remembers watching Basic Instinct in a theater and barely recognizing herself, and that the experience marked a shift in her personal style. “I don’t think I had any idea, really, that I could look so great,” Stone told Vanity Fair. “Then I was like, ‘Oh, I could look like that all the time. Maybe I should get with it.’ Ellen [Mirojnick, costume designer] really taught me how to feel empowered like the character I was playing.” 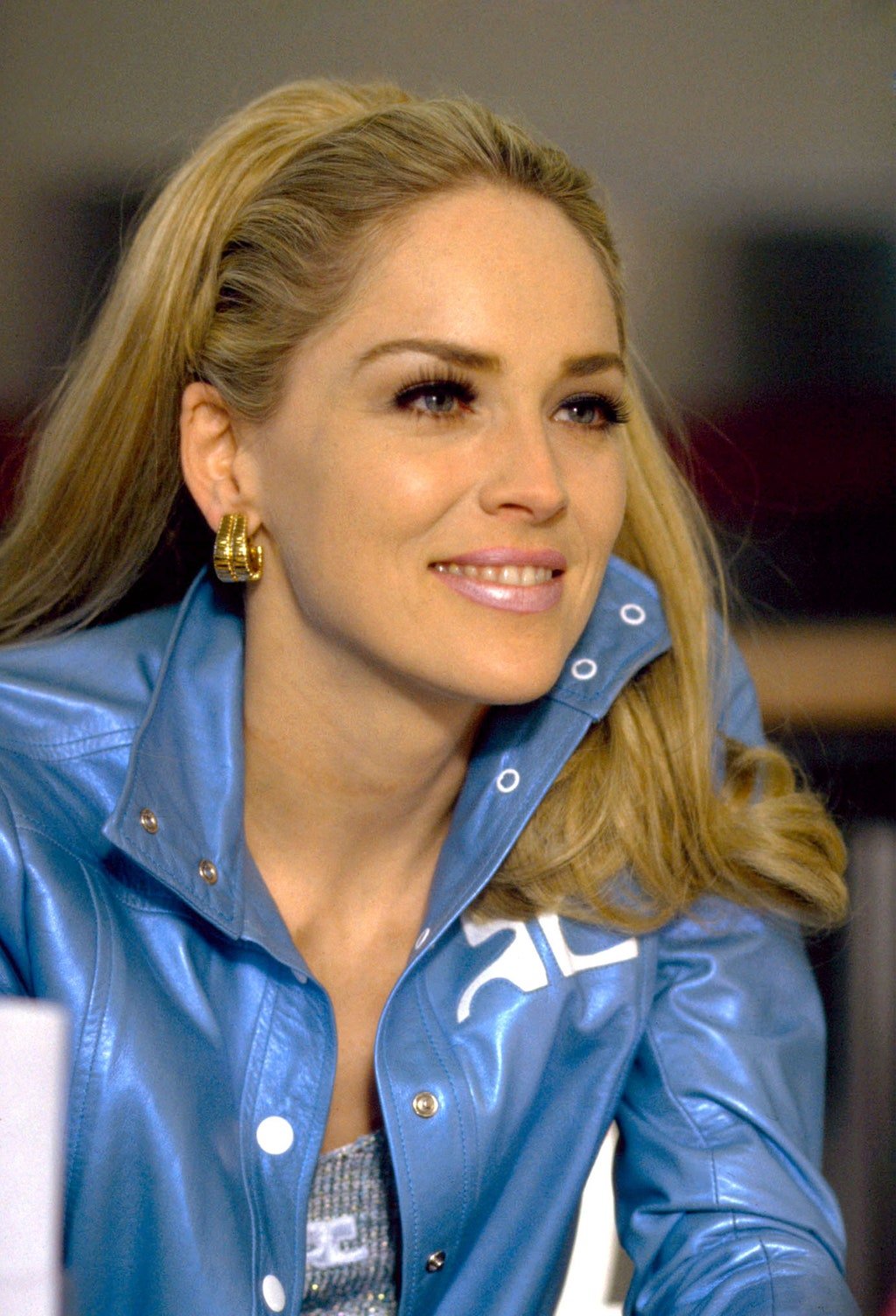 While Stone did keep one sartorial memento from Casino-“The only thing I took was a Pucci jacket-the one that Ginger dies in, ironically,” Stone adds-her response to the question of whether Ginger had a similarly profound effect on her style is unambiguous. “No,” she says, after a pause. “When I finished shooting Casino, I went with my boyfriend Bob on his next picture which was for Jodie Foster,” she remembers. “I only took pajamas and coats because I was so freaking tired. I lived in my pajamas, I went to bookstores and restaurants in the afternoon in my pajamas, a winter coat, a hat, and mittens. After Casino, I had to just lie down for three months.” If Ginger’s lasting style legacy-and Stone’s recently rediscovered binder of research-is anything to go by, it’s a rest that was firmly well-earned.