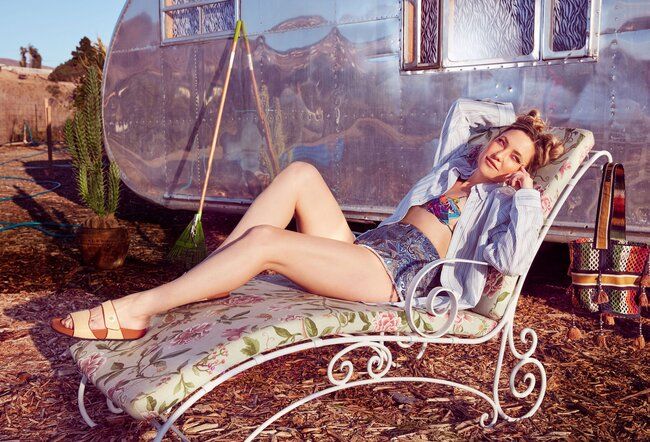 She makes it look easy, but for actress and lifestyle queen Kate Hudson, optimism is a discipline.

As an actress and a businesswoman, Kate Hudson understands the expectations that other people have about what her life and career should look like. After all, her persona is that of a bubbly, relentlessly optimistic woman who always looks as if she's just ingested a bottle of sunshine. This afternoon, dialing in from her living room in Los Angeles, she's on-brand in a pale pink silk and lace dress, her makeup freshly applied and her hair blown out into beachy waves. She might as well have stepped out of a KiraKira filter. Then she starts talking about her latest role, as a recovering addict named Zu, in Music, the directorial début by the wig-shrouded experimental pop singer and songwriter Sia. "'We're going to get weird,'" Hudson, 41, remembers Sia telling her. "'You're going to shave your head, walk around with a sports bra on, bloody up your face, and smash your head into a wall.' As a creative person, I was like, 'Yes.'"

This Fight Club visual is unlike anything we've seen from the daughter of Goldie Hawn - a legendary beacon of charisma and pep herself. Hudson made her name early on in her acting career as Penny Lane, the bombshell rock fan in Almost Famous. She went on to become a rom-com icon, playing misguided and bumbling but ultimately winning female protagonists in movies like Raising Helen and How to Lose a Guy in 10 Days, where she was the woman who tries her hardest to sabotage her relationship with Matthew McConaughey and simply can't, because she's just too charming. 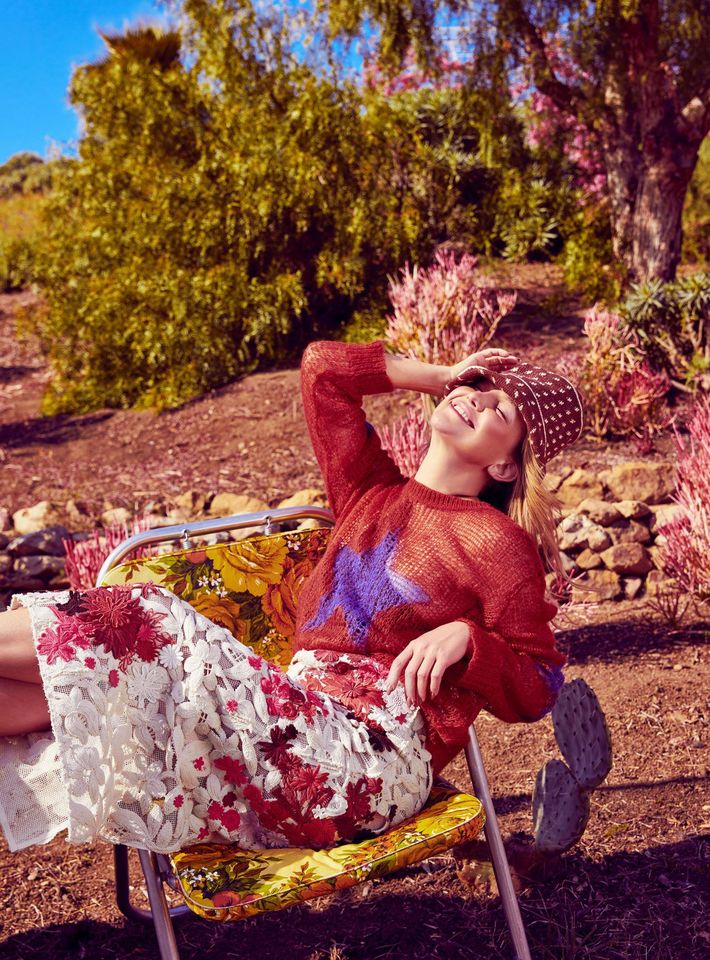 All of her most memorable roles have had distinct flavors, but these characters share a kind of effortless magnetism and shine. They're comforting pop-cultural figures - like Hudson, they're indelible and easy to connect with. As she's gotten older, Hudson has harnessed these qualities and distilled them into new ventures, creating a web of products - workout-apparel brand Fabletics, the liquor label King St. Vodka, and the plant-based-supplement company InBloom - designed to help the everywoman have fun and feel good in equal measure.

Not even a Zoom media tour can faze or annoy Hudson. "People are sometimes like, 'Ugh, the press.' And I'm like, 'Huh?' I actually like talking to people," she says. 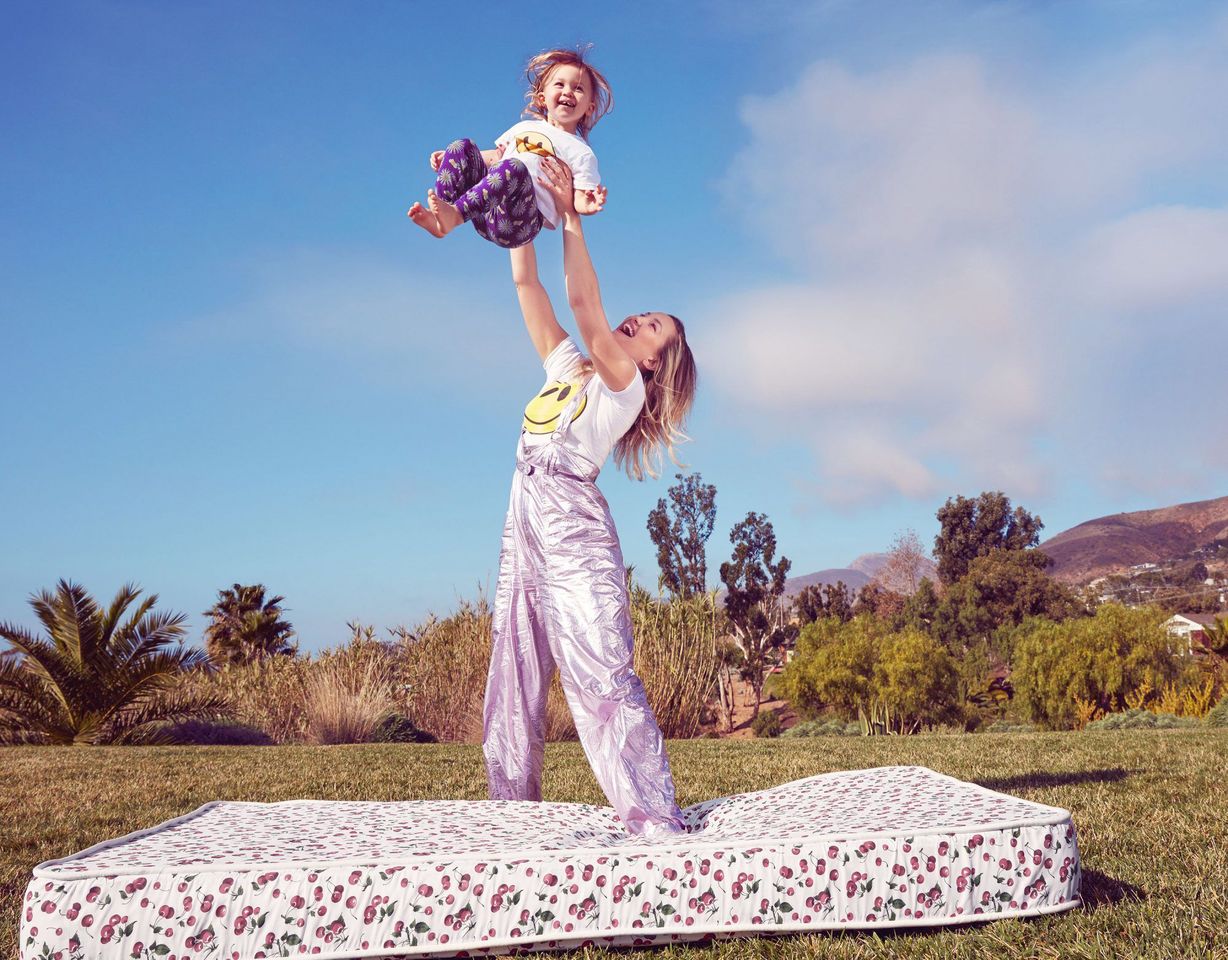 As a wellness-minded lifestyle guru, Hudson knows that it can be difficult to get people to take her seriously. "What they really want to know is, 'What's your skin-care routine? What kind of chair is that? Where'd you get it?' They don't really want to understand the intensity of getting involved in a character. I don't talk about that often, because, frankly, a lot of it is really boring." 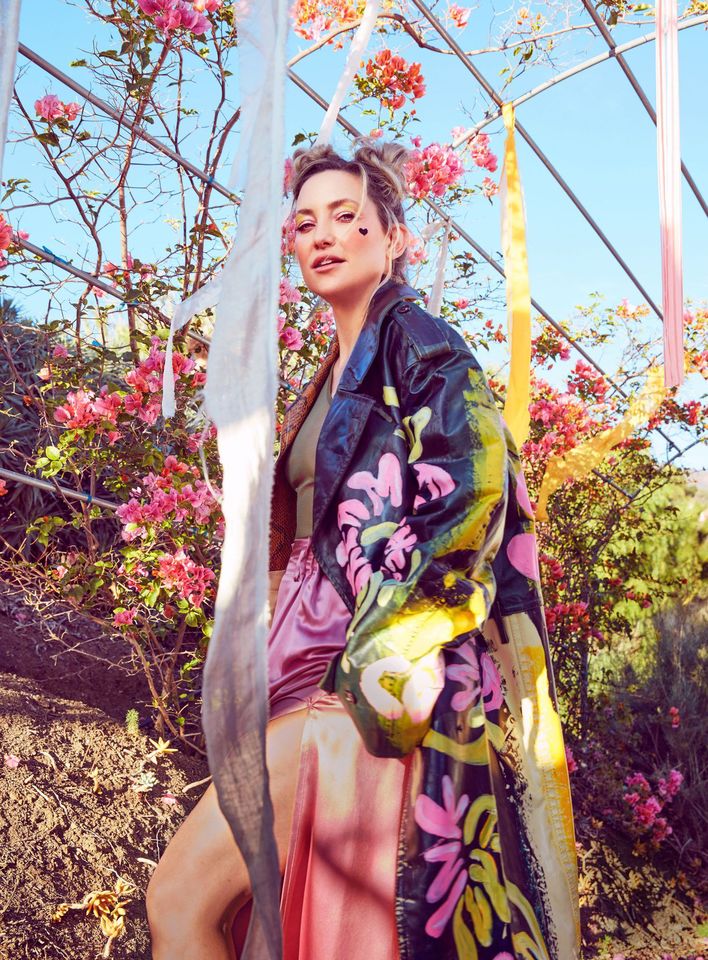 But to pigeonhole Hudson would be to underestimate her. Her films have garnered nearly $2 billion at the box office worldwide, and Fabletics, which she co-founded in 2013, does approximately $500 million in annual sales. Meanwhile, in the past few years of her acting career, Hudson has quietly taken on an assortment of headier roles that explore dark moments in American history and her own emotional range: She played Eleanor Strubing, the white socialite who accused her black chauffeur of rape, in the 2017 film Marshall, about Supreme Court Justice Thurgood Marshall. And she starred as Mark Wahlberg's wife in 2016's Deepwater Horizon, based on the largest marine oil spill in history. According to Hudson, her résumé is, in fact, filled with roles that have shades of complexity and sadness. "If you look at Almost Famous, Penny Lane is not a light character. I started my career off playing parts that were interesting," she says. "But I like hopeful characters. I like characters who can cry and laugh at the same time."

Some people might be surprised when they see Hudson in her latest head-bashing role in Music. Zu is the older half-sister of Music, an adolescent girl on the autism spectrum (played by performance-art wunderkind and frequent Sia collaborator Maddie Ziegler). To prepare for the film, Hudson and the rest of the cast immersed themselves in autism education. "We read, we talked to people, we watched everything under the sun that could possibly take you through what that experience was," she remembers. Earlier this year there was a minor uproar when the Music trailer came out and Twitter users questioned why Sia had cast the neurotypical Ziegler to play the lead - a choice that Hudson is keen to defend. "Maddie worked so hard on this part and was so intricate and careful about how she was portraying this young autistic girl," she says. 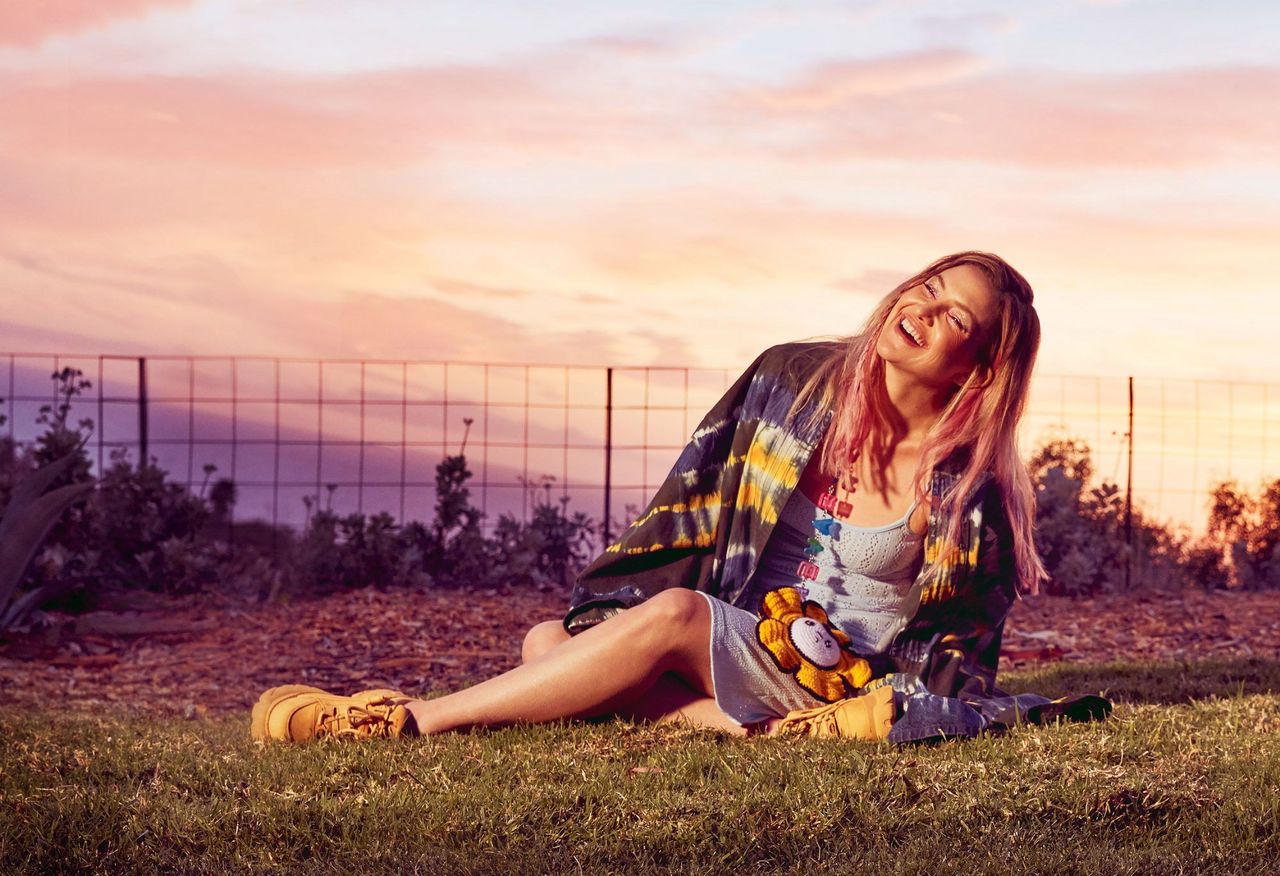 In tackling the role of Zu, Hudson is getting to explore something that brings her happiness - singing, which she has longed to do professionally. The film creates a fantasy world of elaborate costumes and choreography set to original pop songs written by Sia - and largely sung by Hudson, a feat most working actresses wouldn't be able to pull off with such ease. (Sia thought of Hudson for the role after seeing a video of her singing on Instagram.) 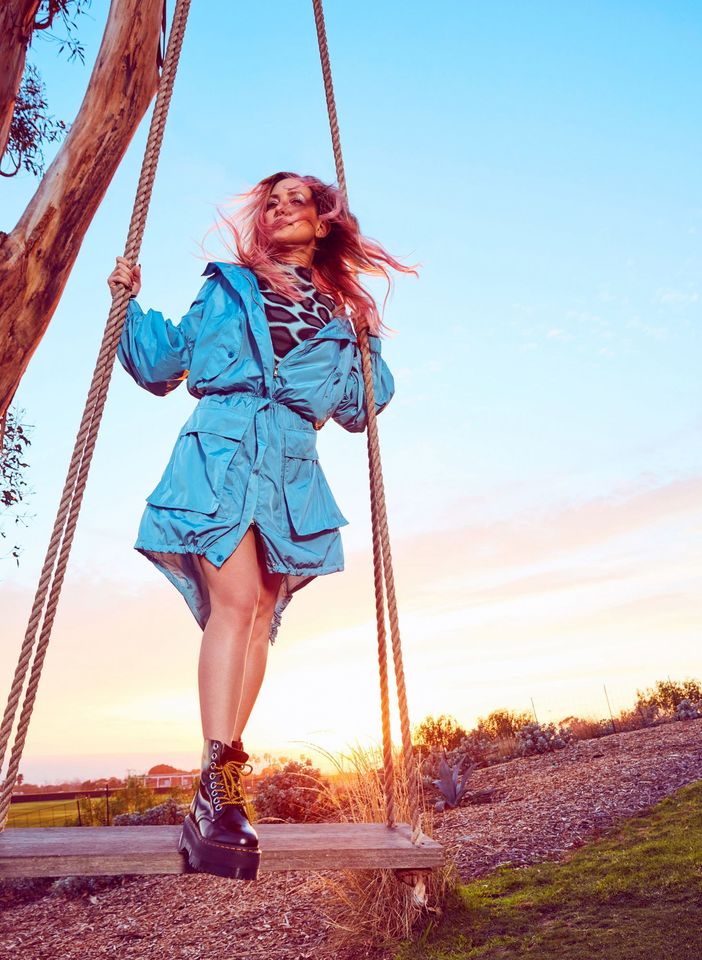 In fact, the reason Hudson was attached to the project at all is because of her long, and somewhat secret, history with music. As a child born into the entertainment world, Hudson was encouraged to pursue performance from all angles. "I grew up with parents who are old-school," she tells me, referring not only to her mother but to her stepfather, actor Kurt Russell. "And when you are a performer, you do everything. You dance, you sing, you act, and you try to make these skills go together. That's all I wanted to do. I wanted to sing, I wanted to dance, and then I wanted to act." It was a bittersweet stroke of luck that Hudson started getting acting roles, because to her it meant that singing had to take a backseat. "I never really got to fulfill the part of me that's probably my No. 1 passion," she says. 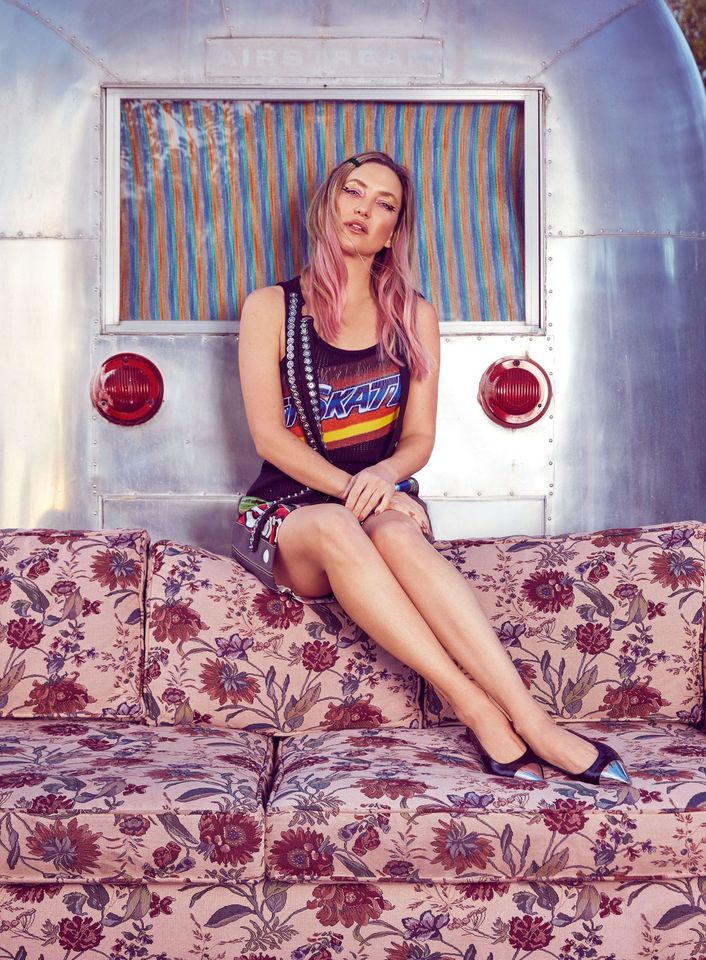 This unrequited love is perhaps one reason why Hudson has been drawn to musicians romantically. She had her eldest son, Ryder, 17, with her ex-husband, Black Crowes frontman Chris Robinson, and Bingham, 9, with Matthew Bellamy of Muse. Her current partner, Danny Fujikawa, the father of her 2-year-old daughter, Rani Rose, is a guitarist. When I tell Hudson that it seems like she's attracted to musicians - a comment that has surely been made a million times - she laughs. "I would like to say they're attracted to me," she says. "I'm attracted to musical people, period. From the outside, yeah, I get it. 'Oh, I like a rock star,' or whatever. But that's not really what it is. The reason I connect so deeply with musicians…is because we all connect to music in a way that you don't have to explain. You just feel it, and it's something you love." ("The lifestyle is not something to fall in love with," she says, laughing.) 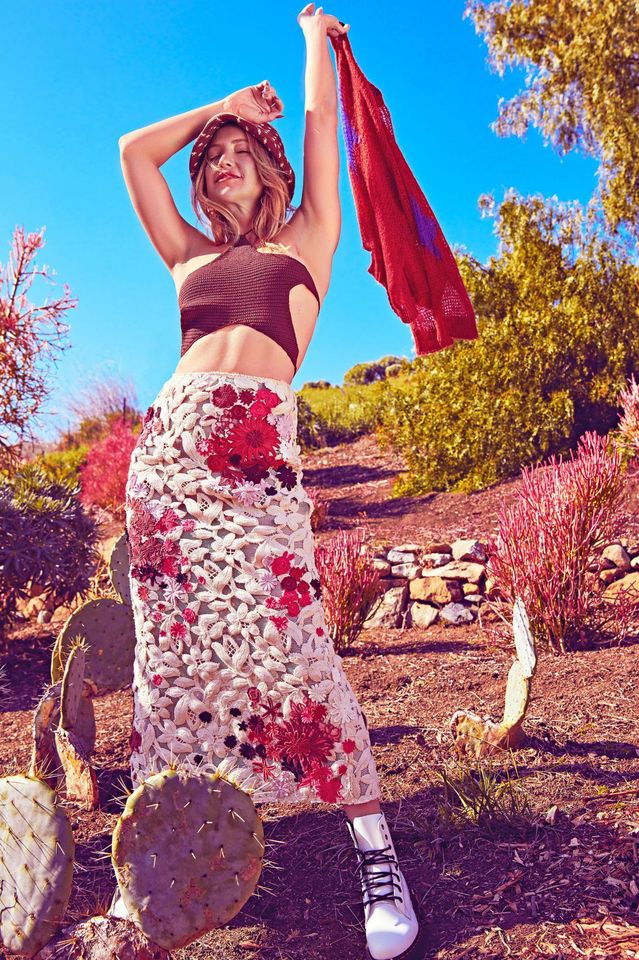 But as Hudson became more successful, her relationship to singing grew more anguished. Her sunny can-do attitude had a (very relatable) blind spot. "I lost sight of my confidence in singing and creating music when I was in my late 20s," she says. One year she was even approached to sing onstage at the Oscars, but she turned it down. Gwyneth Paltrow asked her to sing at her engagement party, and she froze up. Eventually, after a period of self-inquiry, she began to link her complicated relationship to music with her father, Bill Hudson, a musician who abandoned her as a child. "He never was a father to me, so it was sort of like my way of rejecting that relationship," she says. 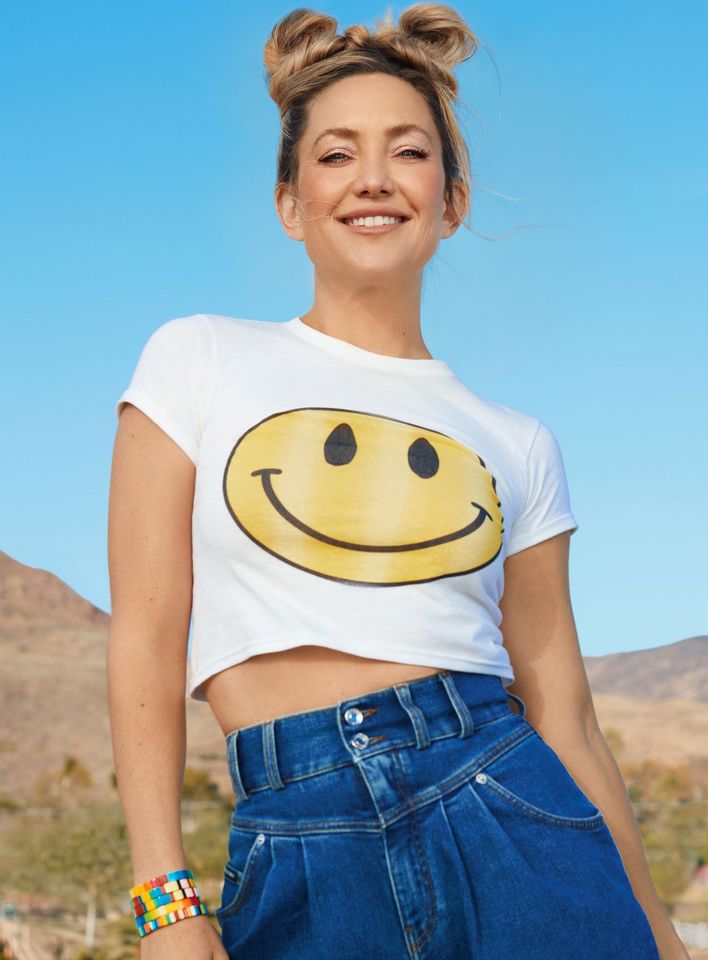 Music was an opportunity for Hudson to continue working through the complexities of her relationship to the art form. "For me personally, creating it with Sia was healing in so many ways. It was almost like someone giving me permission to say, 'You've earned this opportunity to express yourself through this.'" As a result of what she achieved in the film, Hudson says, "I've worked through it, and I feel more confident. Now I get excited about singing…and I don't have any expectations of what I want it to look like."

Of course, it can't be bliss and shine all the time. At the beginning of lockdown, Hudson went into intense information-gathering mode and tried to exert strict control over the situation, becoming, as she jokes, "Colonel Mom." "My quarantine has not been quiet," she says. Somewhere nearby Rani Rose lets out a blood-curdling scream. She pauses. "Did you hear that?" she asks. "I need a quarantine from my quarantine." Her business life was another challenge. Last July she was forced to shutter one of her clothing lines, Happy x Nature. "I had that terrible experience of having to watch people continuously getting furloughed, and it was just falling apart," she says. 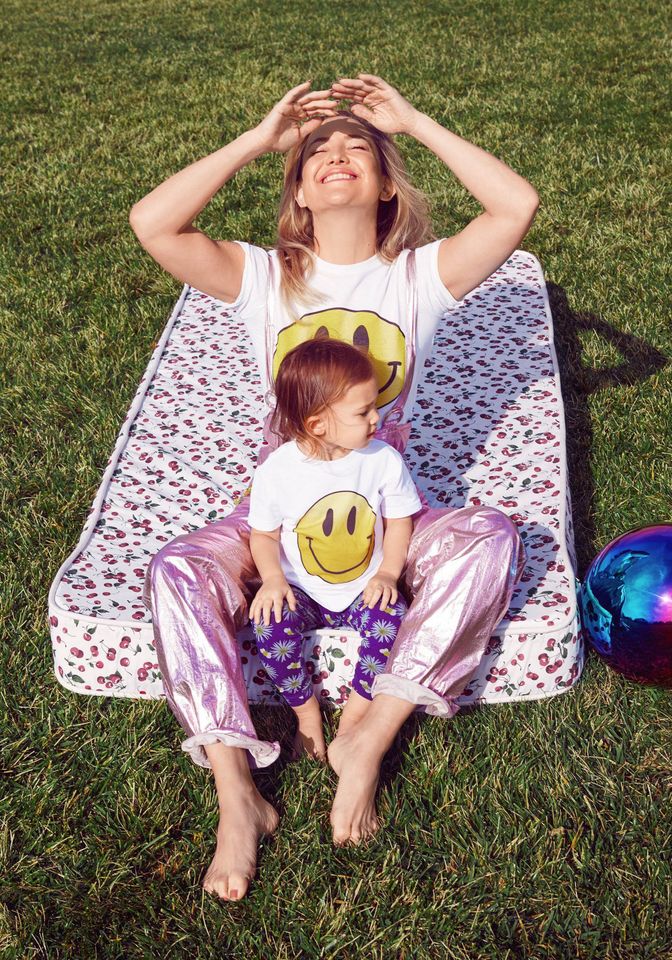 But this being Hudson, she is quick to find an upside to the experience: "Everybody finds a silver lining in it and a purpose throughout," she explains, getting philosophical about the long-term emotional effects of the pandemic. The time has made her reconsider her sources of satisfaction. "I think it's a positive thing," she says. "What do you really need, and what makes you happy?"

Besides the ample family time, one thing Hudson has learned that makes her happy in such a distressing moment is the escapism of glamour. "Glamour is fantasy to me," she says. "It's part of what we were doing for this shoot. I was sitting there with these sparkles on my eyes, and I realized that since I was a little girl, I've loved beautiful dresses that made me feel like I was in a fairy tale. I feel like I owned the clothes that were at the shoot when I was young. Except they weren't Dior. They would have been from my favorite store up in Topanga, Hidden Treasures." In the pandemic, she's realized, "I needed to put on beautiful, flowy things that were colorful, even just to sit at home."

Like everyone, Hudson is reevaluating her career prospects for 2021. She'll still be running her businesses but with an intensified focus on acting (she's currently shooting the new season of Truth Be Told, with Octavia Spencer). She's also recording music with friends in her downtime. But mostly, she'll be channeling her time and Care Bear energy into projects that allow her to delve deep into her subconscious, like Music. Case in point: "My brother, Oliver, and I have a podcast, Sibling Revelry, where we talk about all of the things that we're into," she says. "Oliver is into fishing, and I'm more into ashwagandha."