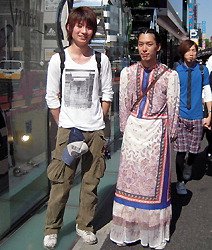 Walking through the lively districts of Harajuku and Shibuya in Tokyo, one might encounter a sight unusual to many people's eyes: men in skirts. Not kilts or kimono, but skirts.

Called "the skirt boys," or "skirt tribe," the skirt-wearing men of Tokyo are beginning to get some attention from the fashion world. And so, though it may be a little rude, I have to ask: How is this different from being a cross-dresser?

I see my first skirt-clad man in Harajuku on a weekday afternoon, his garment made of an almost transparent white cotton, with pretty geometric designs along the hem. He is a second-year art student named Haruki Shana.

Shana says he first wanted a skirt after seeing the robes in the "Harry Potter" films, and now has four that he made himself. He also says that he first became aware he was part of a trend when an employee at the driver's license testing center said, "So, there really is a skirt tribe."

When asked how wearing skirt is different than cross-dressing, Shana says, "Cross-dressers are people who want to be girls. I'm not wearing this because it's what girls wear, but because I like the line and the texture of the material."