The 10 Most Outrageous Red Carpet Looks in Grammy History

Some stars create shock and awe with their Grammys red carpet fashion choices. 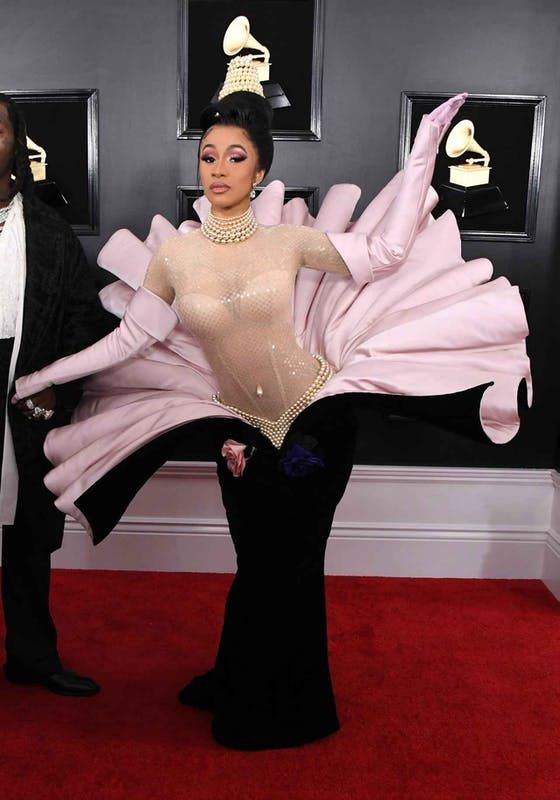 Cardi B wearing archival Mugler at the 2019 Grammy Awards.

Each year, top artists all across America come together to celebrate music’s biggest night. The Grammy Awards, an occasion meant to recognize the effort and talent of our favorite artists, is also an opportunity for stars to stun in unexpected outfit choices. There is no doubt that red carpet fashion is something we all look forward to. While some artists decide to opt for a more sophisticated and elegant look, there are many others who push the limits with bold and unique outfits.

From ultra-sheer fabrics to deep plunging necklines and dramatic entrances, artists like Lady Gaga, Jennifer Lopez, and Madonna have all shocked the world by delivering memorable and iconic looks that remain permanently ingrained in pop culture.

With the 63rd Annual Grammy Awards ceremony just around the corner, L’OFFICIEL rounds up the most shocking and unusual looks to ever walk the Grammy's red carpet. 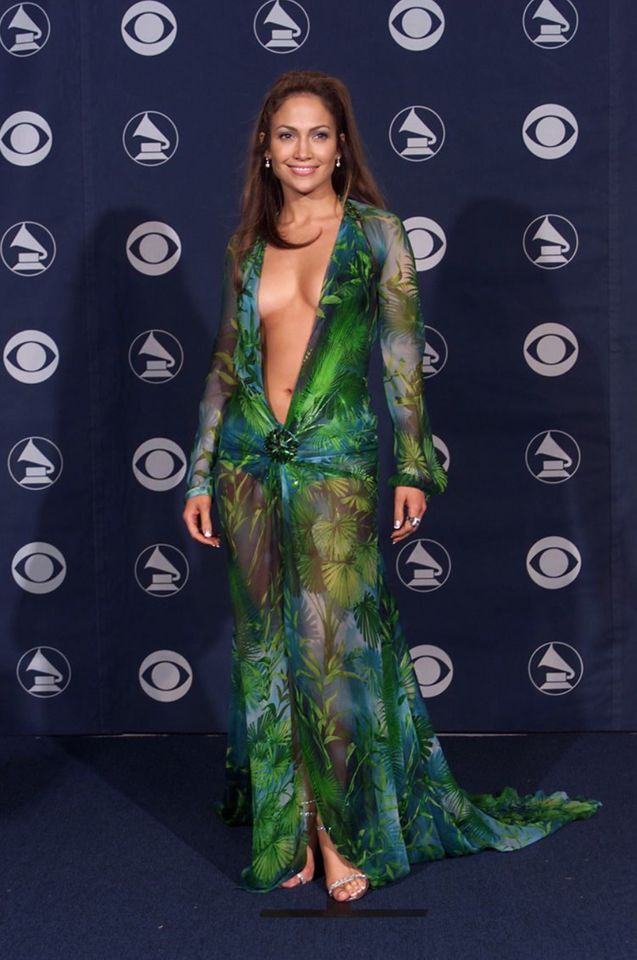 This well-known jungle print Versace dress first broke the Internet when J.Lo showed up to the 2000 Grammy Awards red carpet. Since then, the iconic look has been recreated for the artist to close out Versace’s Spring/Summer 2020 show. 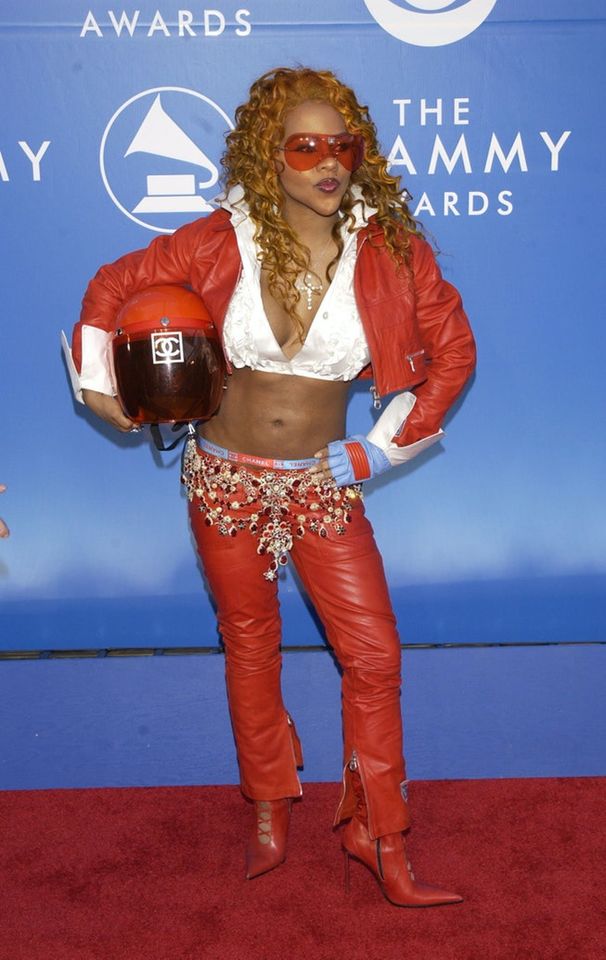 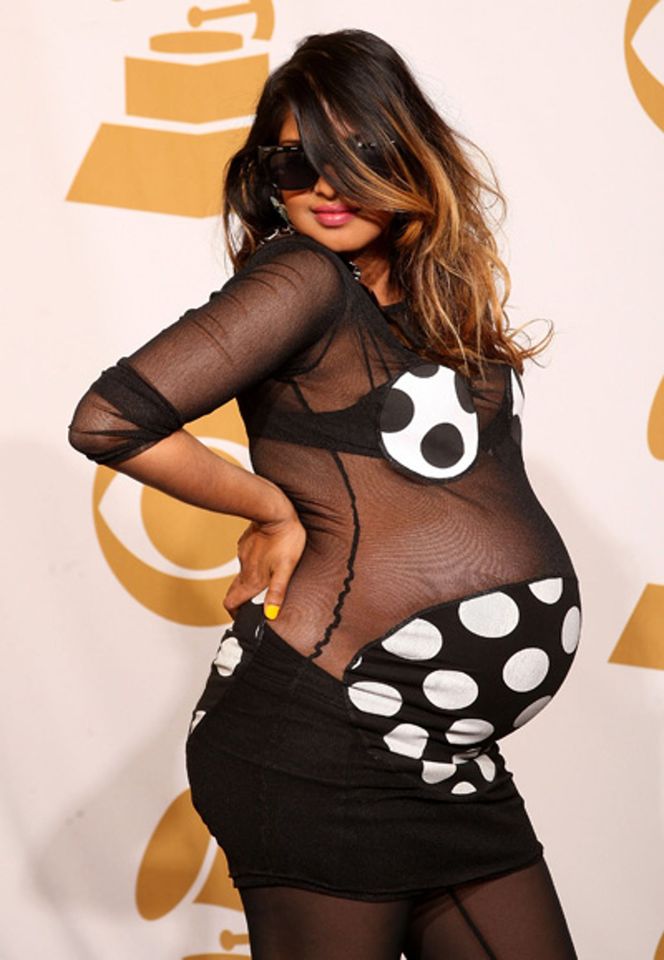 M.I.A.'s son took to the Grammy's stage before he was even born. This questionable maternity look embodies the singer's spontaneous energy. Designed by Henry Holland, the mesh polka dot ensemble emphasized her very pregnant belly. 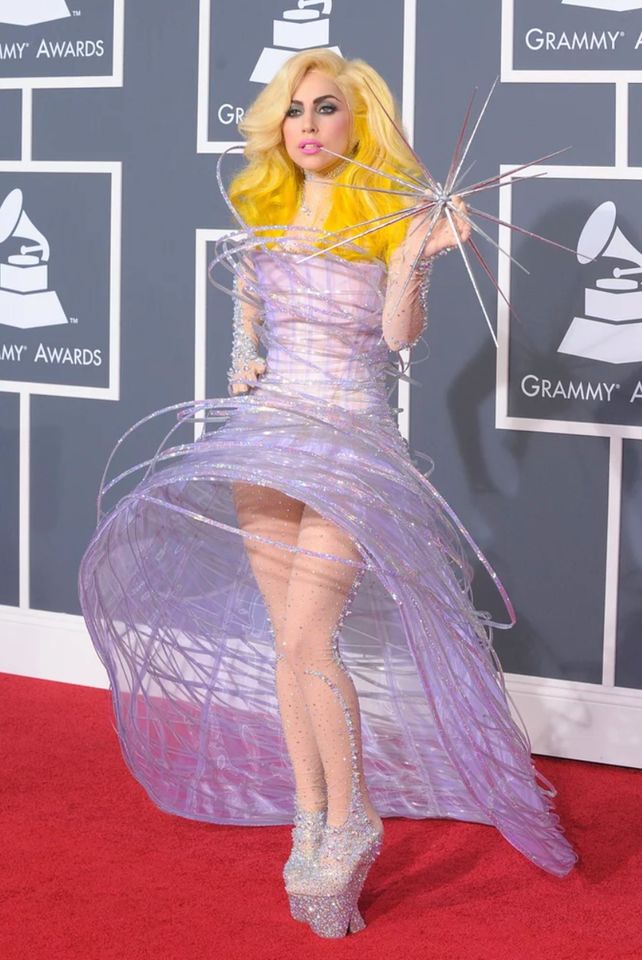 In 2010, Gaga arrived at the Grammys red carpet in a show-stopping intergalactic dress and her statment heels. This was just one of many outrageous fashion moments the pop star has made at the awards show. One of Hollywood’s most memorable and dramatic entrances, in 2011 Lady Gaga became the queen of the red carpet by arriving in a giant egg carried by four semi-naked attendees. She later emerged on stage for her performance of "Born This Way." 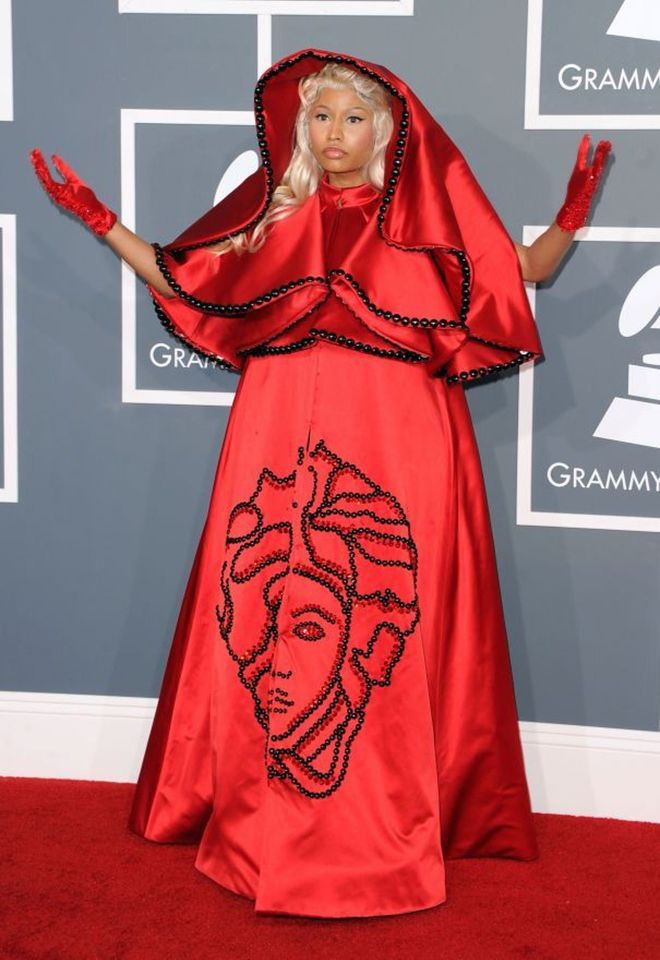 At the 2012 Grammy Awards, rapper and singer Nicki Mina wore a bright red Versace cape and gown inspired by her song "Roman Holiday." She also arrived with a man dressed like the Pope to keep with her theme for dramatic effect. 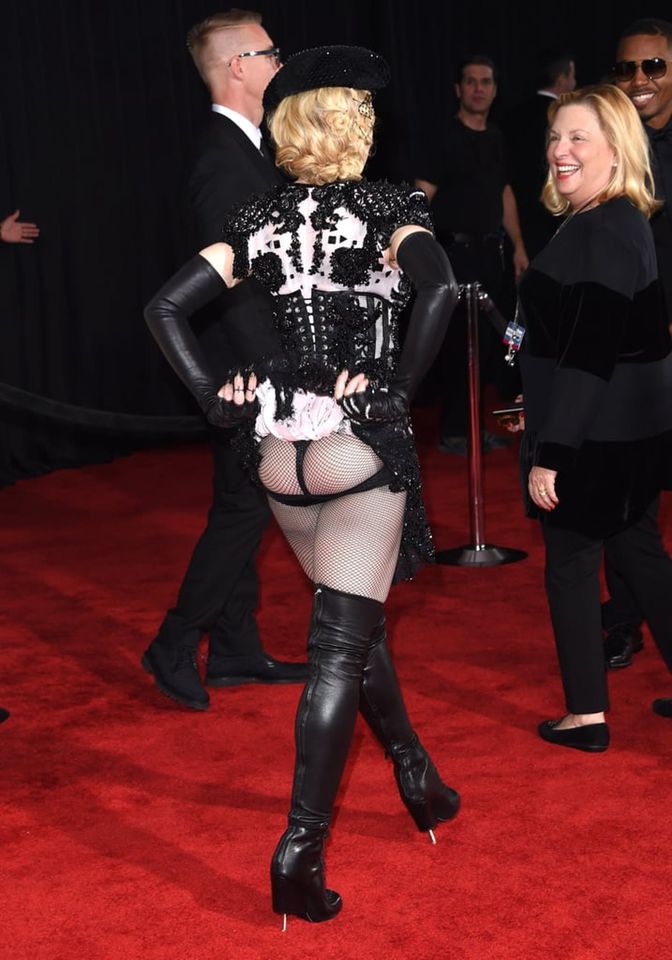 For the 57th Grammy Awards, Madonna showed off her figure in a custom Givenchy burlesque-inspired outfit that featured a sexy lace corseted bodice paired with ultra high-knee leather boots. The brazen look was taken to the next level when the star flashed the cameras her backside. 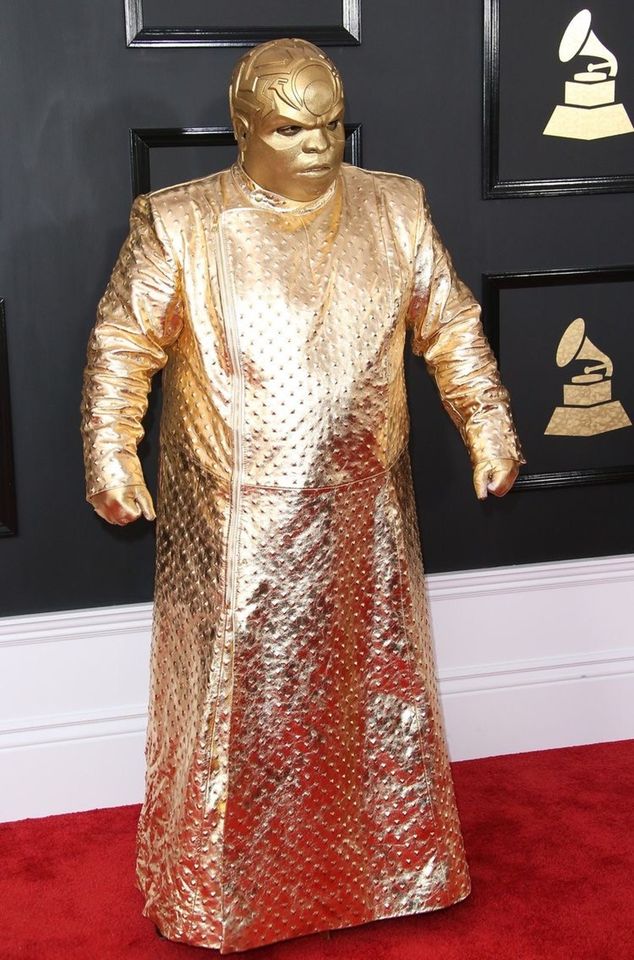 Rapper Cardi B arrived at the 2019 Grammy Awards in a mermaid-like gown directly from Thierry Mugler’s archive. The dramatic look was as memorable on the red carpet as it was in Mugler's Fall/Winter 1995 Haute Couture show. 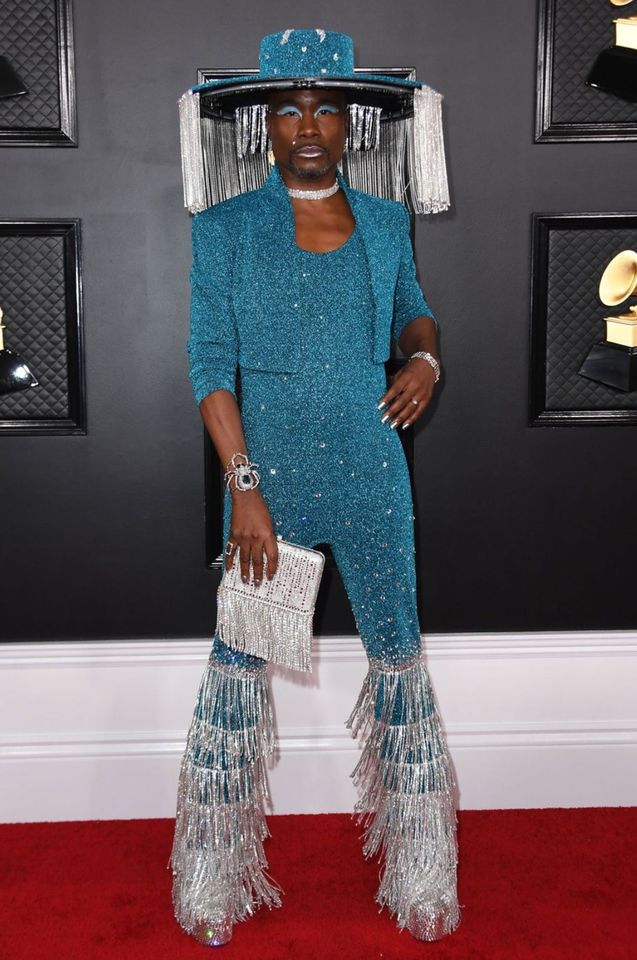 Another bedazzling, glam moment in our list, Billy Porter rocked a head-to-toe sparkling look paired with a mechanical hat that featured fringe that moved to reveal his face. The actor paired the look with matching blue eyeshadow and silver lips and nails. 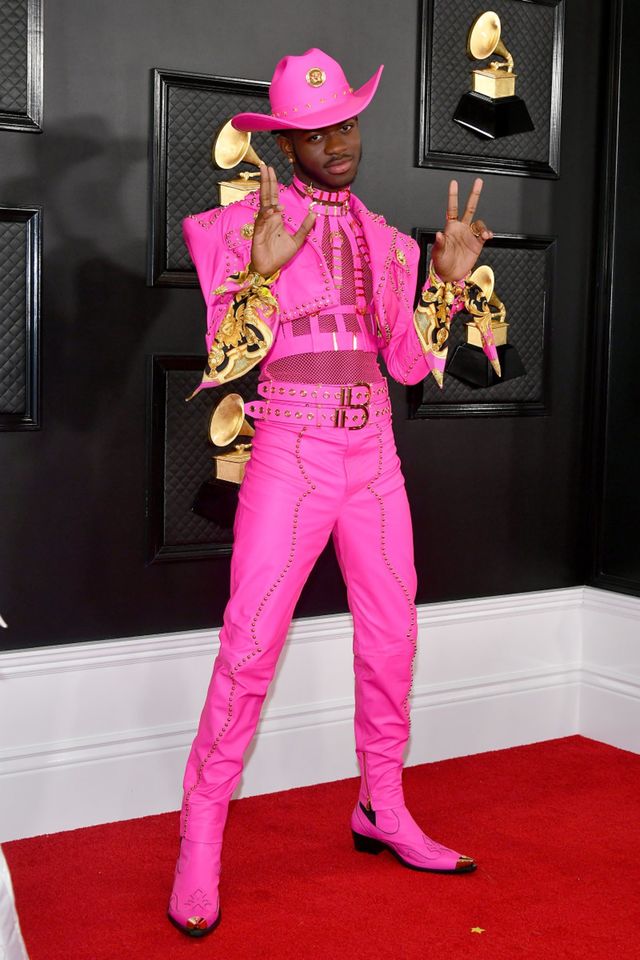 This new rapper took to the red carpet as a pink Versace cowboy. The electric ensemble included a cropped leather jacket, mesh tank, and belted harness. With touches of Versace's signature gold motifs, Lil Nas X was hard to miss.