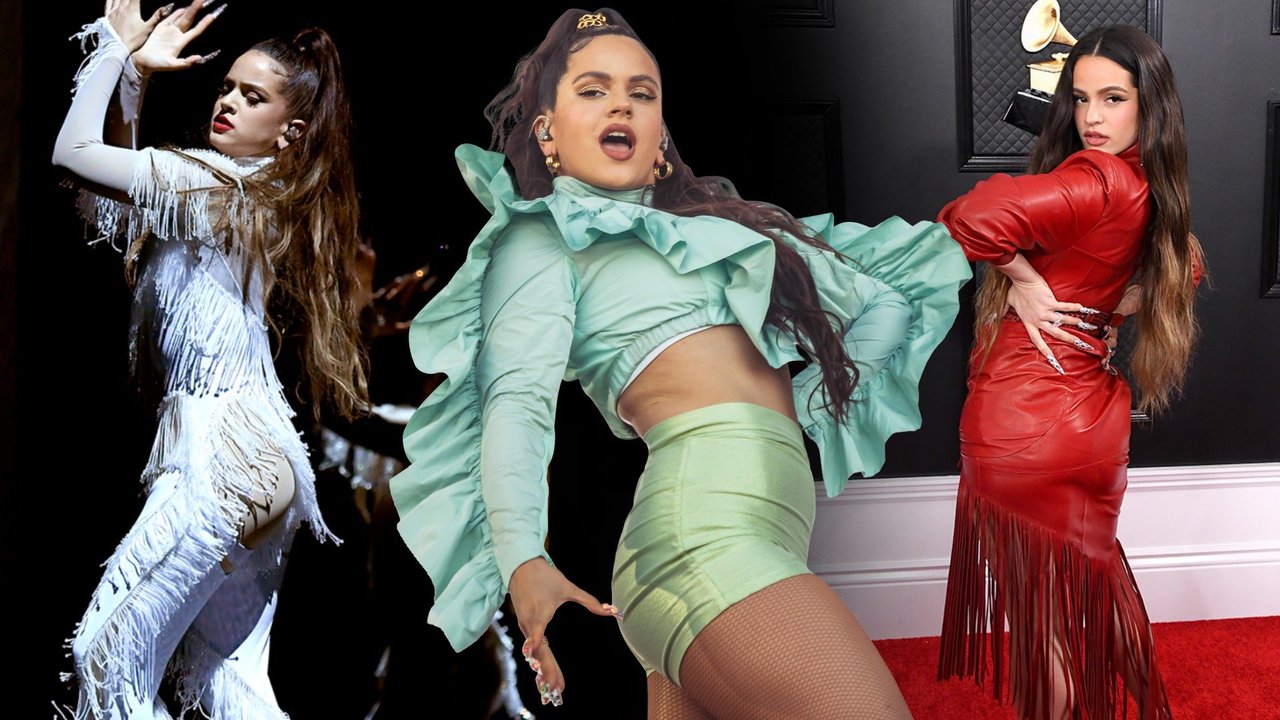 The Evolution of Rosalía’s Showstopping Style

When Rosalía first began receiving international attention off the back of her second album, El Mal Querer, in 2018, much of the interest was focused on her bold update of the sonic landscape of traditional Spanish flamenco music.

Working alongside collaborator and coproducer El Guincho, whose background lay primarily in experimental, psychedelic pop, Rosalía took the central tropes of flamenco-the rhythmic handclaps known as palmas, the dramatic melisma, its nods to traditional Arabic song-and gave it a daring new spin, largely by infusing it with the contemporary music genres she absorbed while growing up just outside of Barcelona. In the process, Rosalía introduced a fresh take on flamenco music not just to a new generation but to a new global audience. 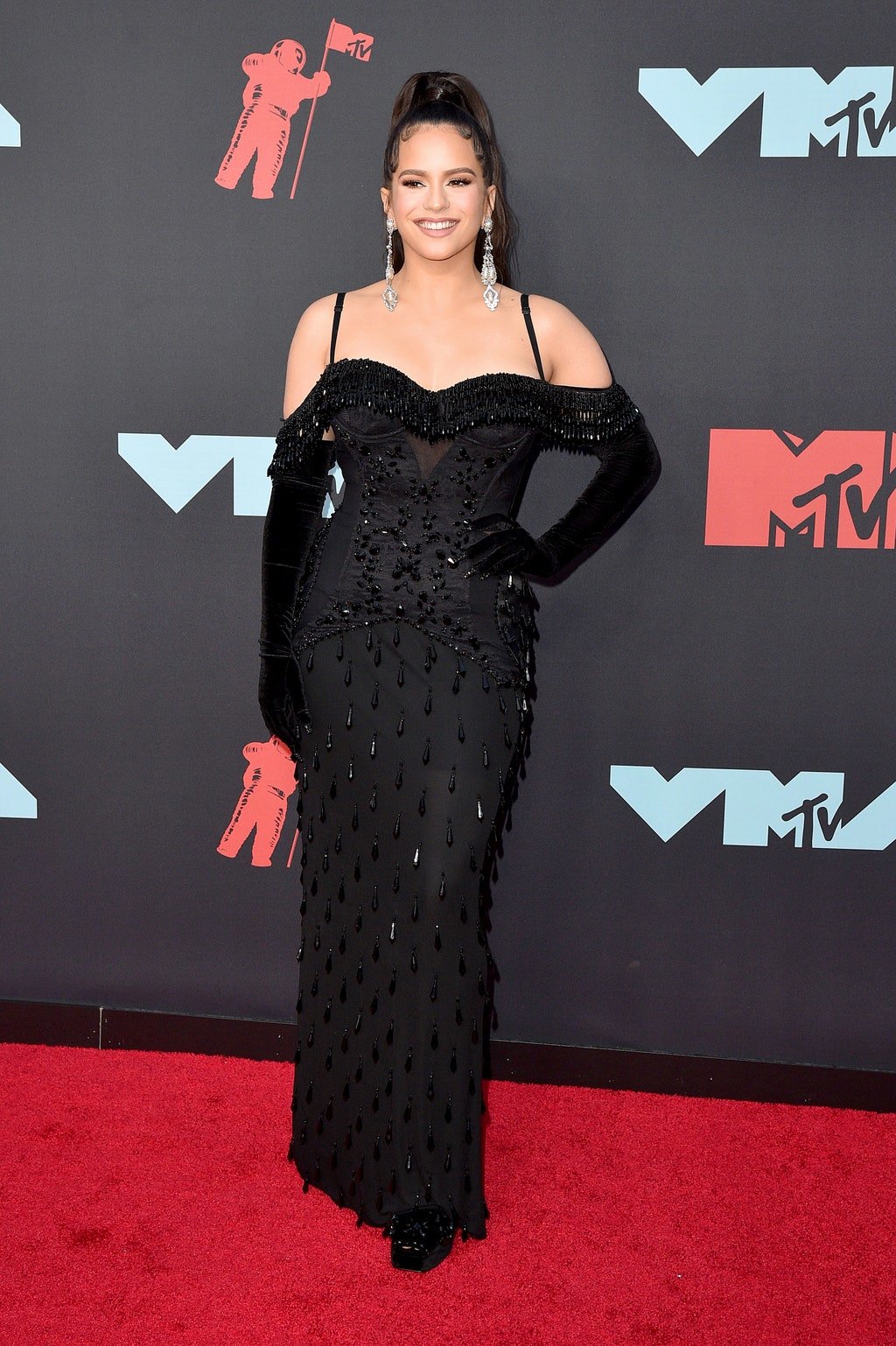 And that’s not the only area in which Rosalía has paid homage to her heroes from within the world of flamenco. So too has her take on fashion-working initially with her sister, Pili, who still serves as a creative consultant, and more recently with stylist to the stars Samantha Burkhart-adopted the elements of traditional flamenco style she adores and playfully adapted them to feel brilliantly of-the-moment. Just take the shoot accompanying her January Vogue cover as an example: photographed by Annie Leibovitz and styled by Carlos Nazario, the singer raises her hands in a traditional flamenco gesture while her ruffled crepe Versace skirt, colored a fiery Spanish rojo, ripples downward with a rhythmic grace. 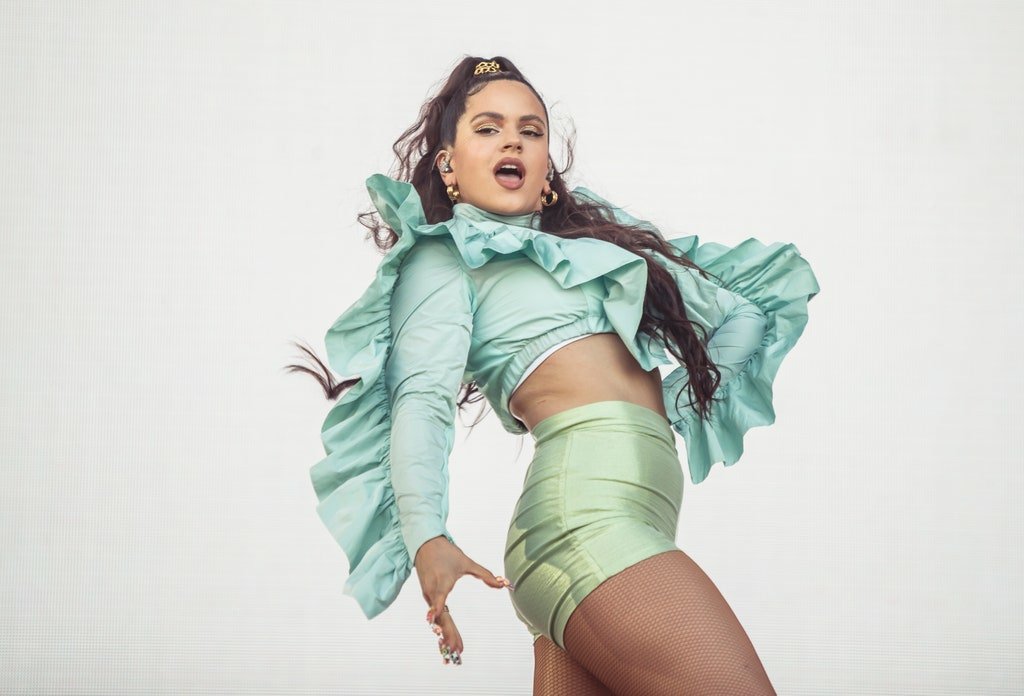 Rosalía’s love for flamenco extends all the way back to her childhood, when she first discovered the music of Camarón, a legendary flamenco musician whose 1970s heyday not only prompted a revival of interest in flamenco but also drew ire from traditionalists by including modern elements such as electric bass in his records. (It’s not hard to see how he might have inspired Rosalía’s own iconoclastic take on the genre, which came about after she spent more than a decade training in the art form.) Rosalía has also cited Lola Flores as a key influence. Arguably the best known international export from Spain’s flamenco scene, Flores’s style is one that conforms to the history of flamenco dress-gold hoop earrings, red lipstick, an artfully slicked hairline, black and red lace, and more ruffles than you can shake a stick at. 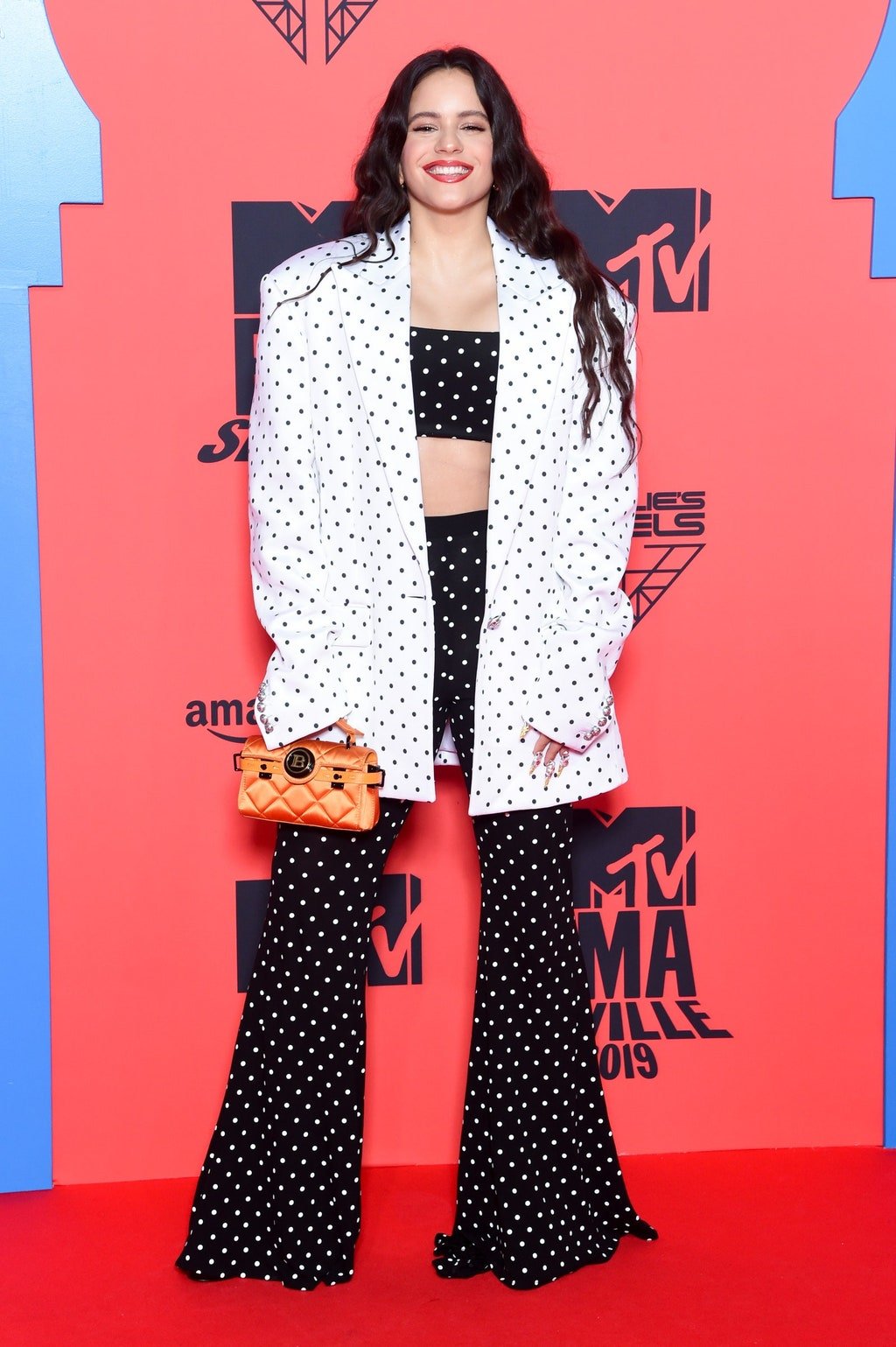 Yet what has made Rosalía’s style evolution so thrilling to watch is how her eclectic sonic palette, which merges flamenco with everything from hip-hop to electro-pop to R&B, is reflected in her style too. Just take her outfit at Mad Cool Festival in Madrid last year, in which the tiered ruffles of the traje de flamenca are reinterpreted as a billowing top in mint green, paired with high-waist hot pants to bring the look firmly into the present day. There’s the opulently beaded Burberry dress she wore to last year’s MTV Music Video Awards, its formfitting silhouette and jet black hue recalling the drama of traditional Andalusian fashion. For an even more playful take on these traditions, there’s the oversized Balmain suit she wore to the 2019 MTV European Music Awards, its contrasting polka dots pointing to those which adorn the dresses of southern Spain, which are believed to have originated in India via the nomadic gypsies from whom the culture of flamenco originates.

There’s also her natural flair for introducing elements of streetwear to these traditional styles in a way that resonates with “the bold aesthetics of the sneakerhead generation,” as Julyssa Lopez describes it in Rosalía’s Vogue cover story. In the video for her chart-topping, Latin Grammy–winning hit “Con Altura”-a collaboration with the Colombian reggaeton star J. Balvin-Rosalía wears colors and silhouettes that subtly nod to her background in flamenco while updating it with novelty, logo-heavy prints in kaleidoscopic colors. And of course there’s her well-known love of a statement manicure, perhaps best admired in her video for the hit single “Aute Cuture,” in which she sports nails that can only be described as giant golden talons; the singer has noted in the past it is a tribute to one of her musical heroes, Lil’ Kim. 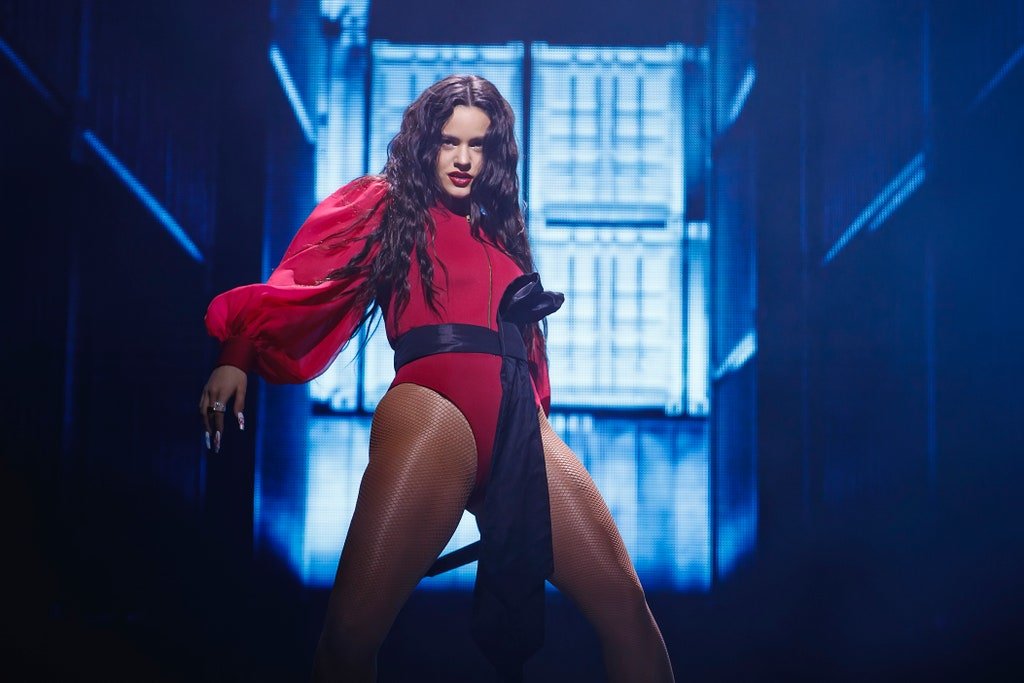 What’s most exciting of all about Rosalía’s style, however, is that she’s only just getting started. With her third album nearly completed and her most recent collaborations involving the likes of avant-garde pop mastermind Arca, all we can say for sure about her next steps musically is to expect the unexpected. But when it comes to fashion, you can be confident there’ll be many more flamenco-inspired details to come-as filtered through her distinctive, whimsical lens, of course. If there’s one thing Rosalía has made clear, it’s that she never forgets where she came from. 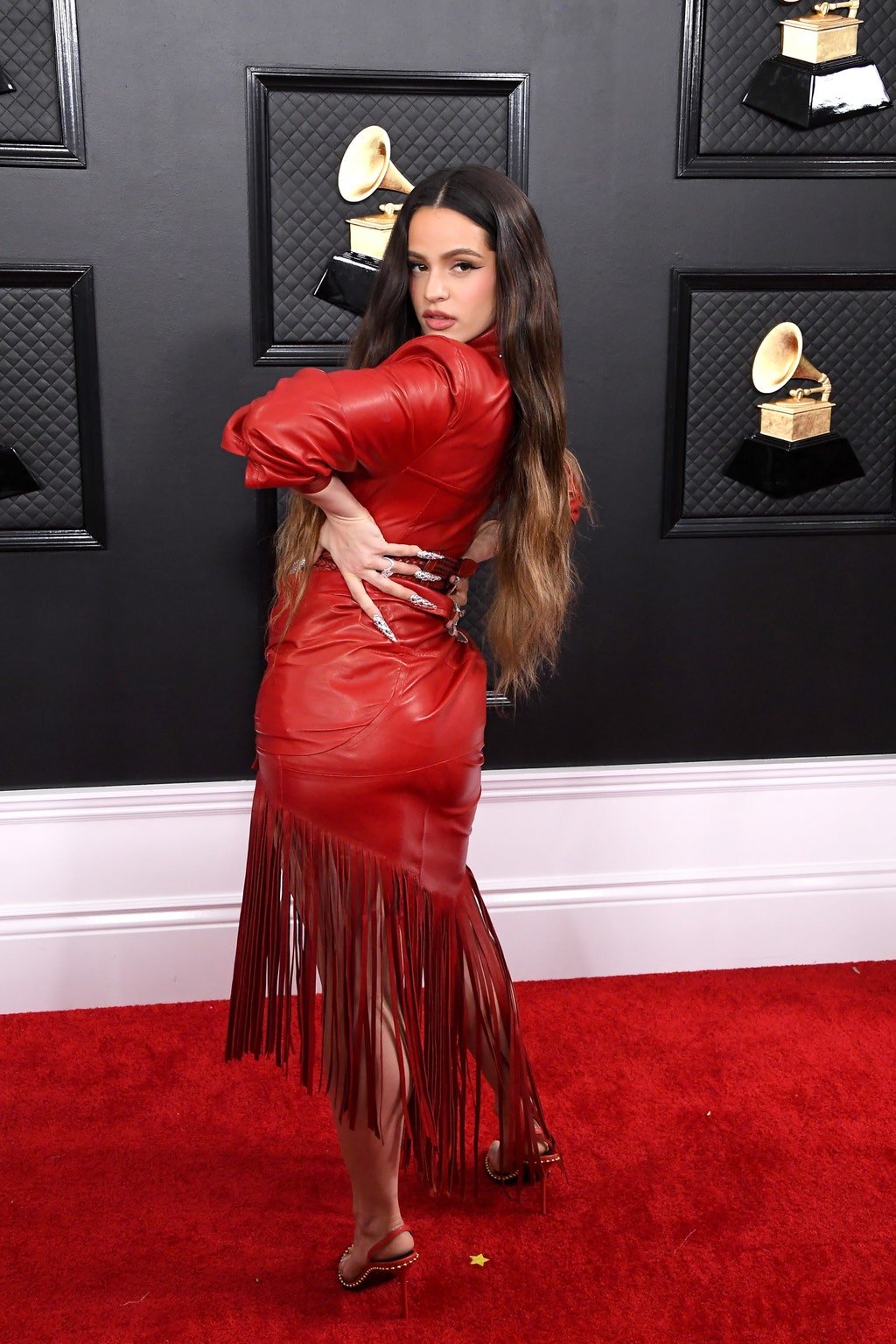 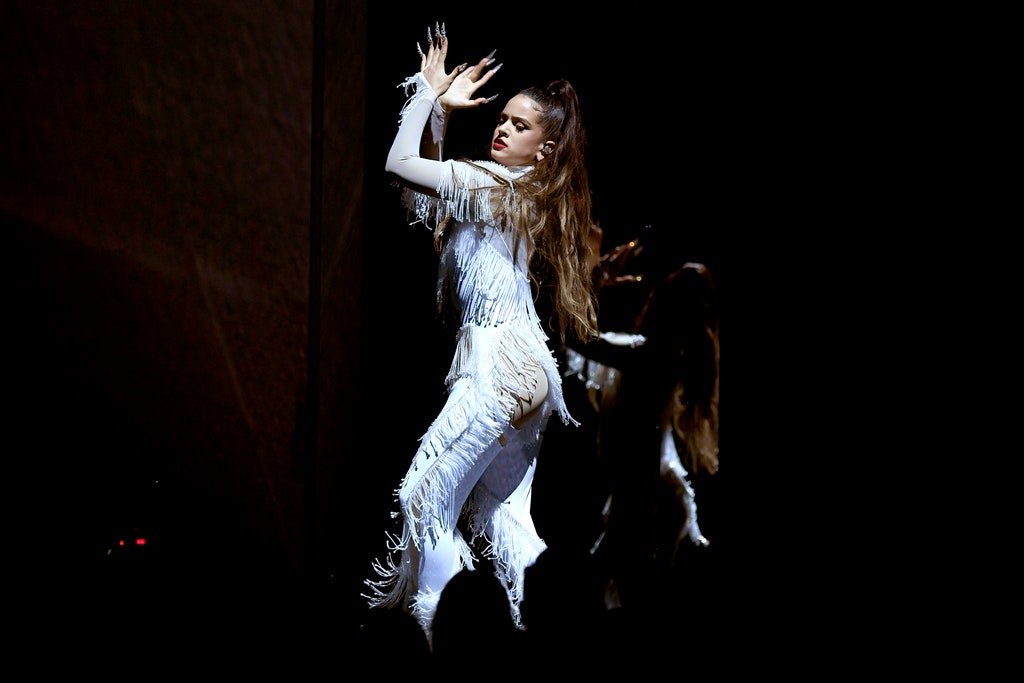