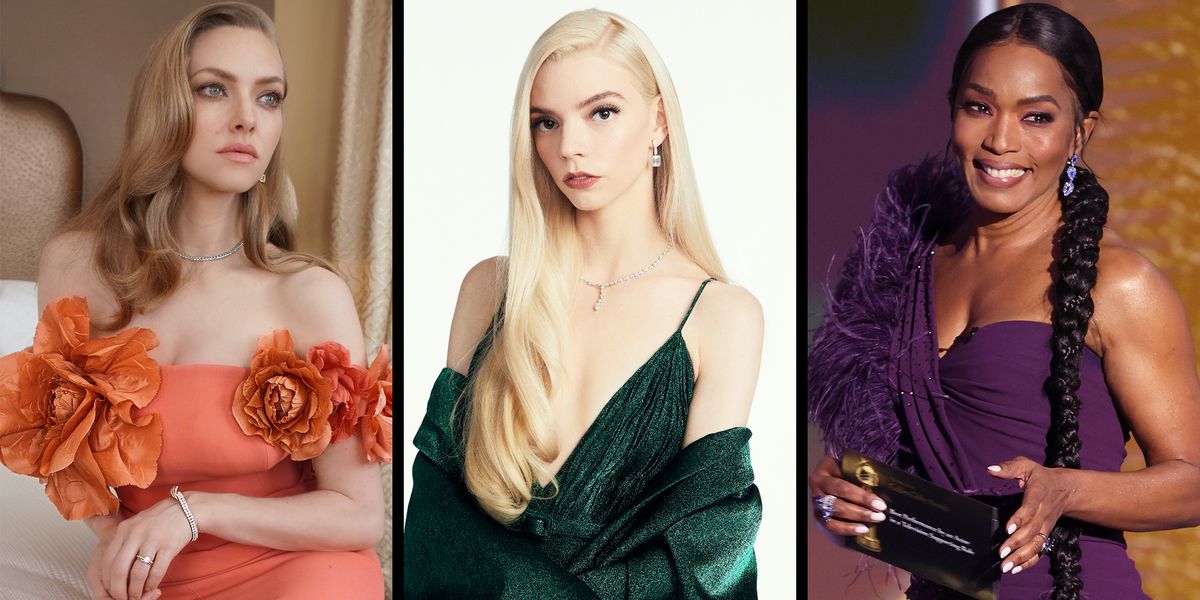 From technicolor eyeshadow to Beyoncé-inspired braids, we picked favorites!

While most of us were in sweatpants and slippers with bare faces on Sunday night, celebrities took the evening to bring us back to the glory days of glam. Virtual meant nothing to our favorite actresses and comedians with face beats for a socially distanced red carpet or couch Zoom session that did not disappoint. From Angela Bassett's braid only fit for legends to Lily Collins' ombre eye, here are the 12 best beauty moments from the 2021 Golden Globes. And long live the side part! 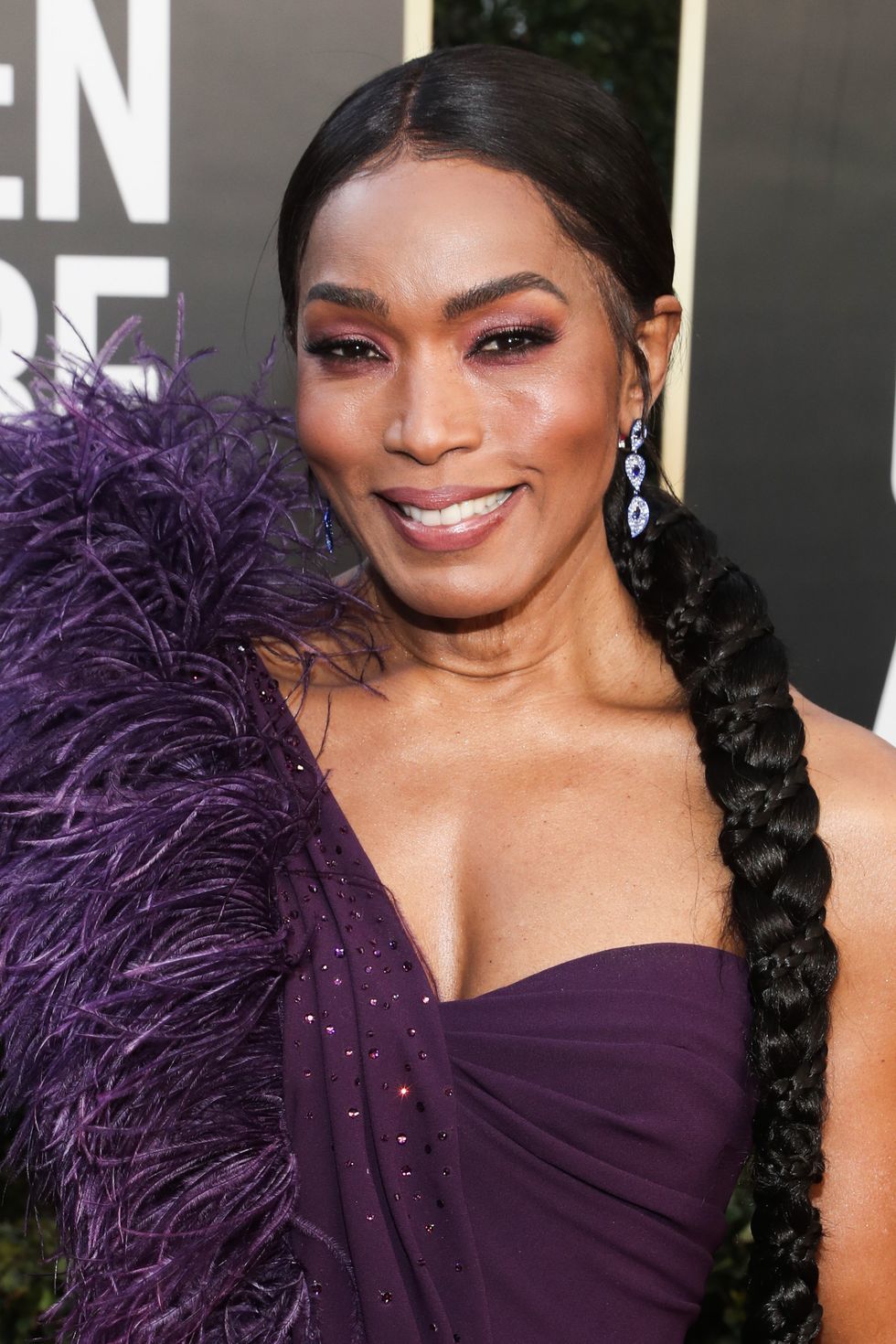 Can we take a moment for this braid? Celebrity hairstylist Randy Stodghill worked his magic (with the help of a few Phyto products!) to achieve the red carpet moment. “Braids are a big trend right now and we wanted something that would be off the face but still have the drama," explains Stodghill. 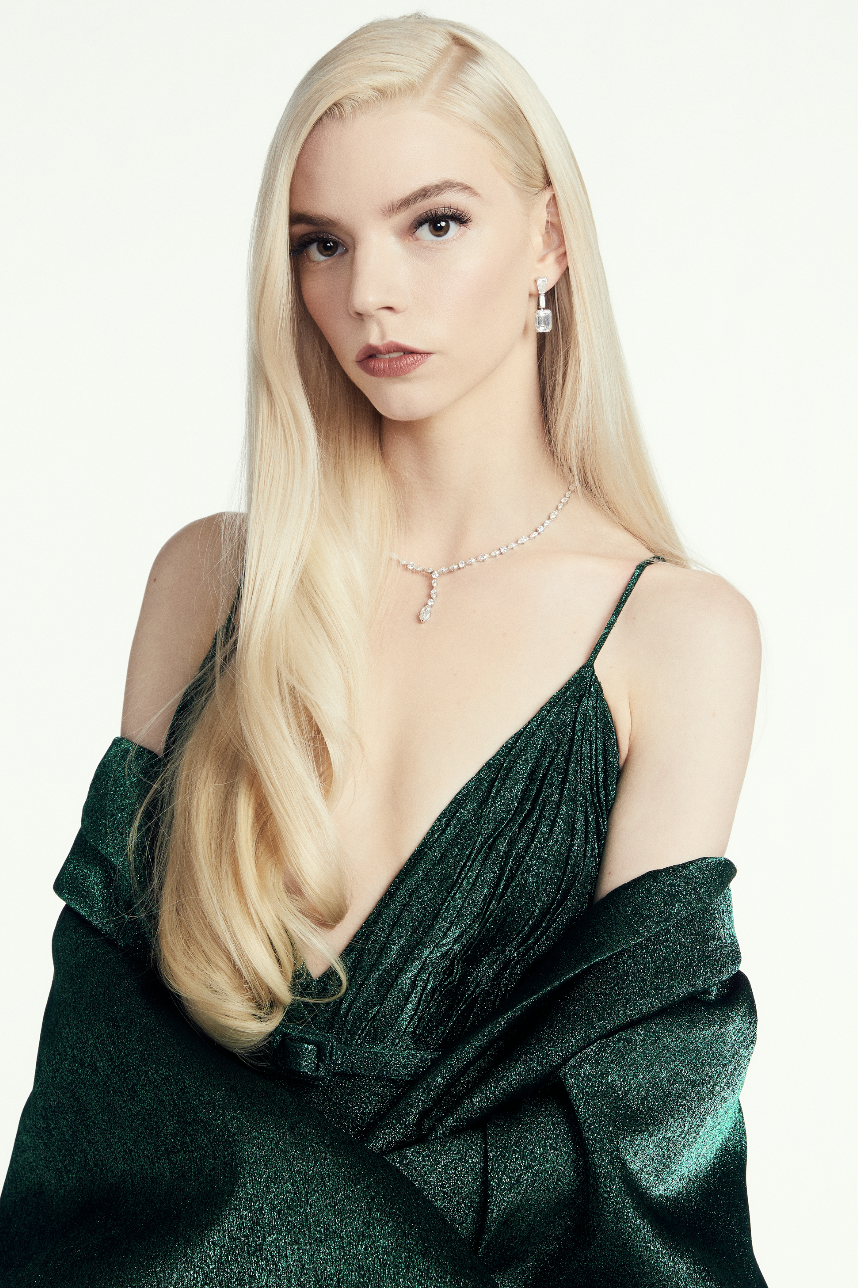 Celebrity makeup artist Georgie Eisdell went for a retro vibe to match her Christian Dior Couture. "Anya’s gown had a little 70’s vibe to it so I really wanted to lean into that," says Eisdell. "I went with a bronzed smokey eye, beautiful lashes, glowing skin and a nude Rouge Dior lip to keep it modern and young." 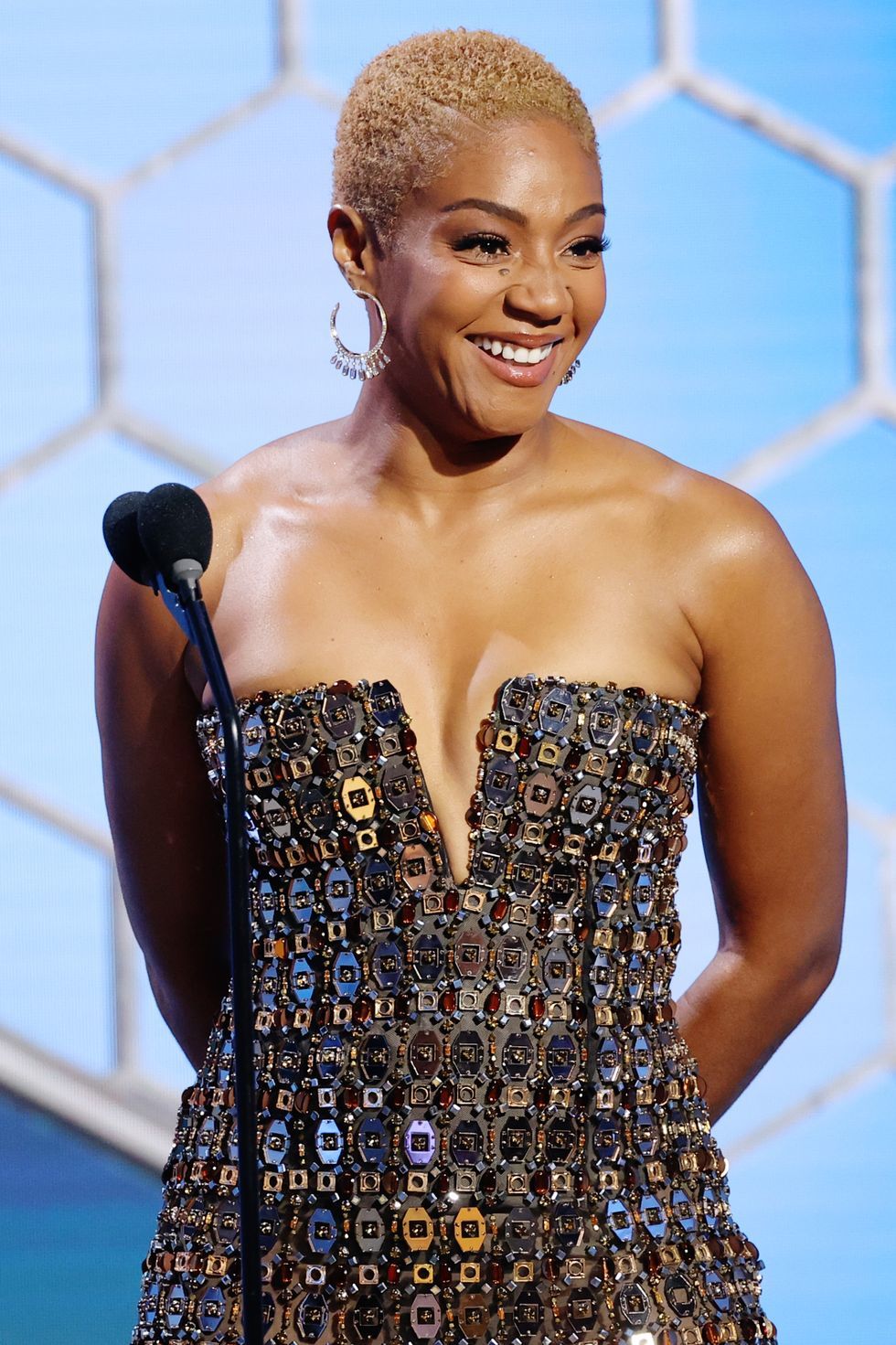 It was all about the golden glow for actress Tiffany Haddish. Makeup artist Ernesto Casillas partnered with Shiseido for the bronzed beat that has us dreaming of warmer weather. His secret was to highlight the center of her face with Synchro Skin Self Refreshing Liquid Concealer in Medium 304 and add a soft flush of color with the Minimalist Whipped Powder Cream Blush in the shade Sayoko 06. 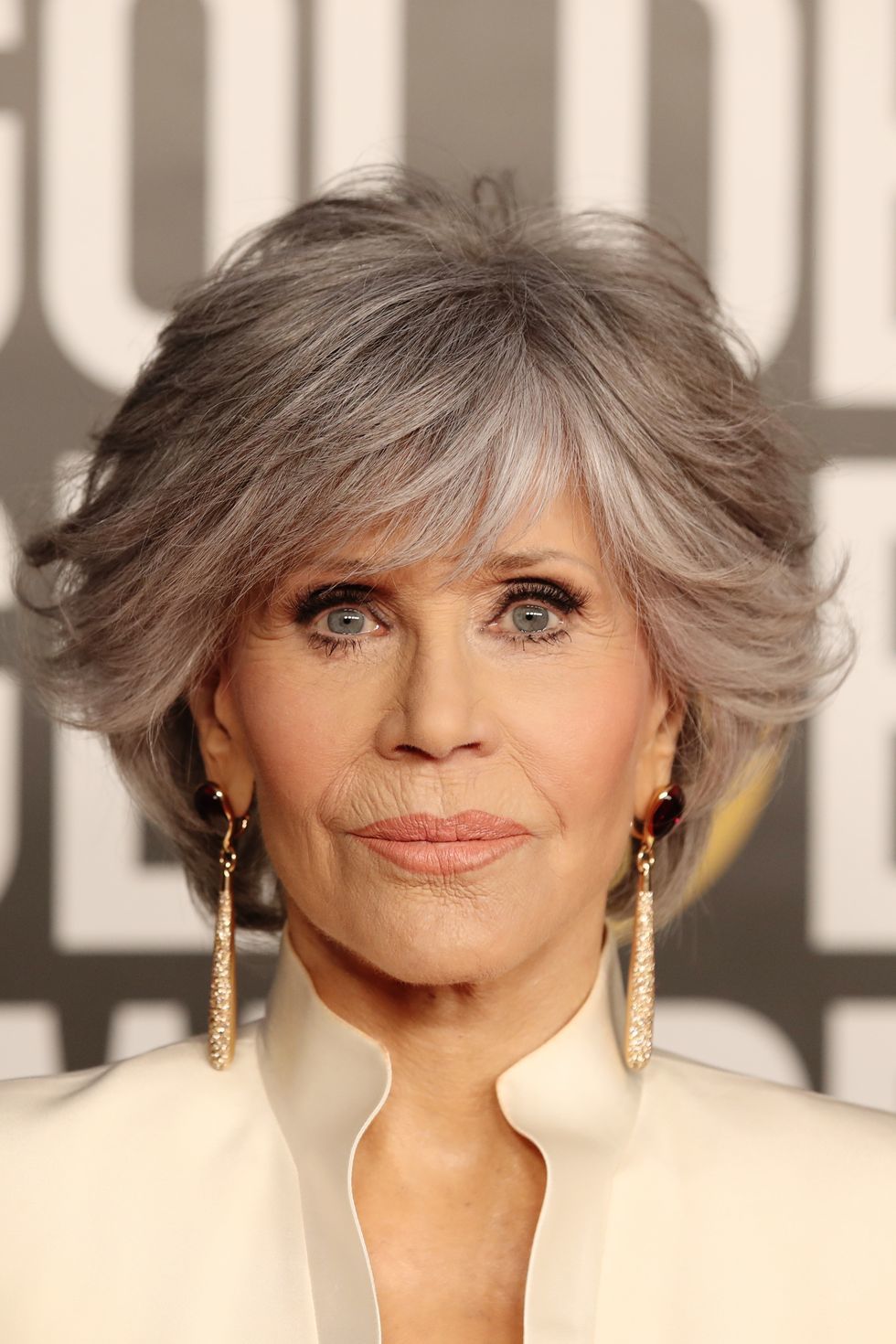 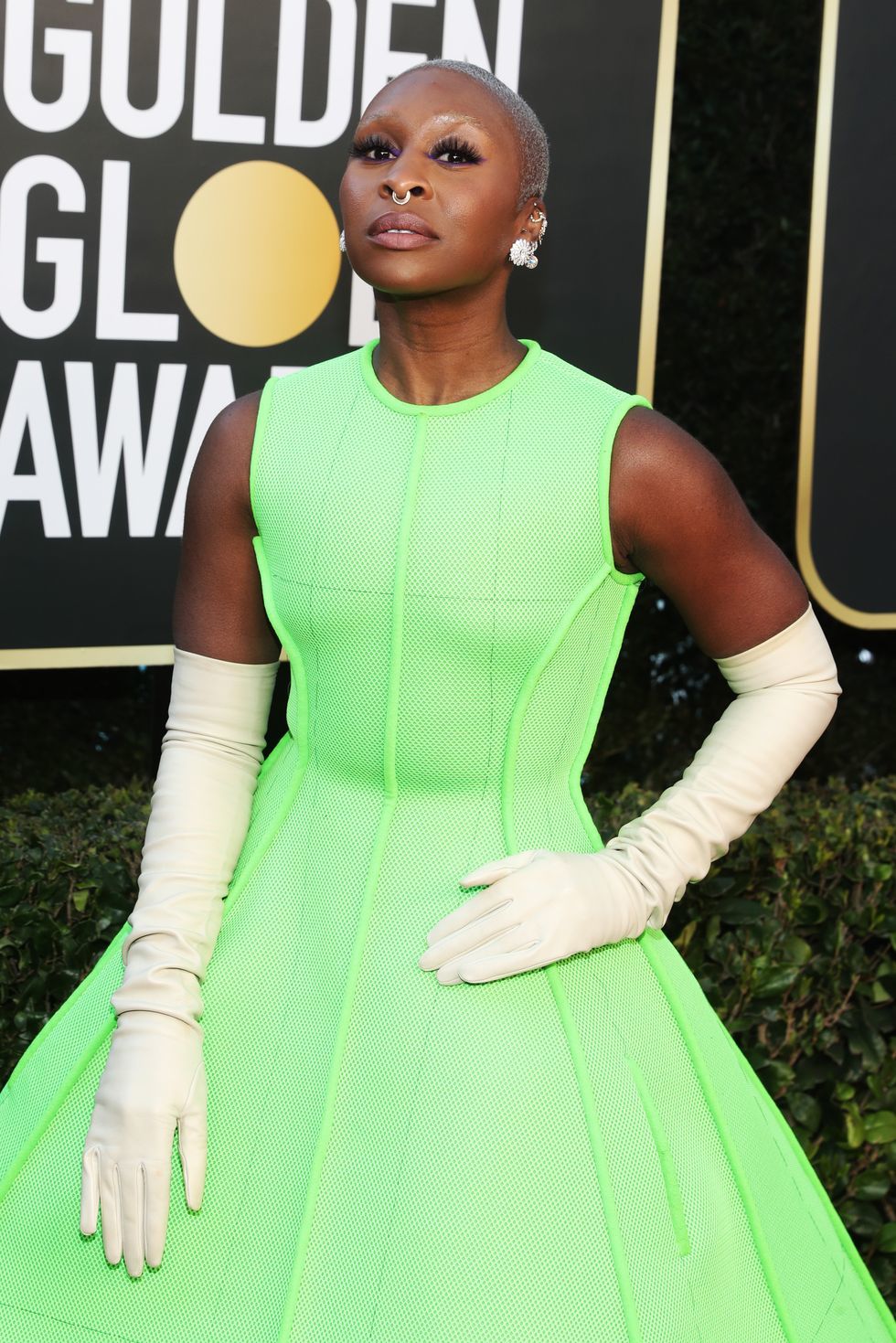 Celebrity Makeup Artist Terrell Mullin teamed up with Giorgio Armani for the bold eyes and dewy skin. The blush was the star, with Mullin using Giorgio Armani Neo Nude A-Blush in 30 to bring a flush to Erivo’s cheeks.

Erivo also sported her signature short blonde hair that showed off her face and had all our attention on her drop-dead gorgeous face beat. 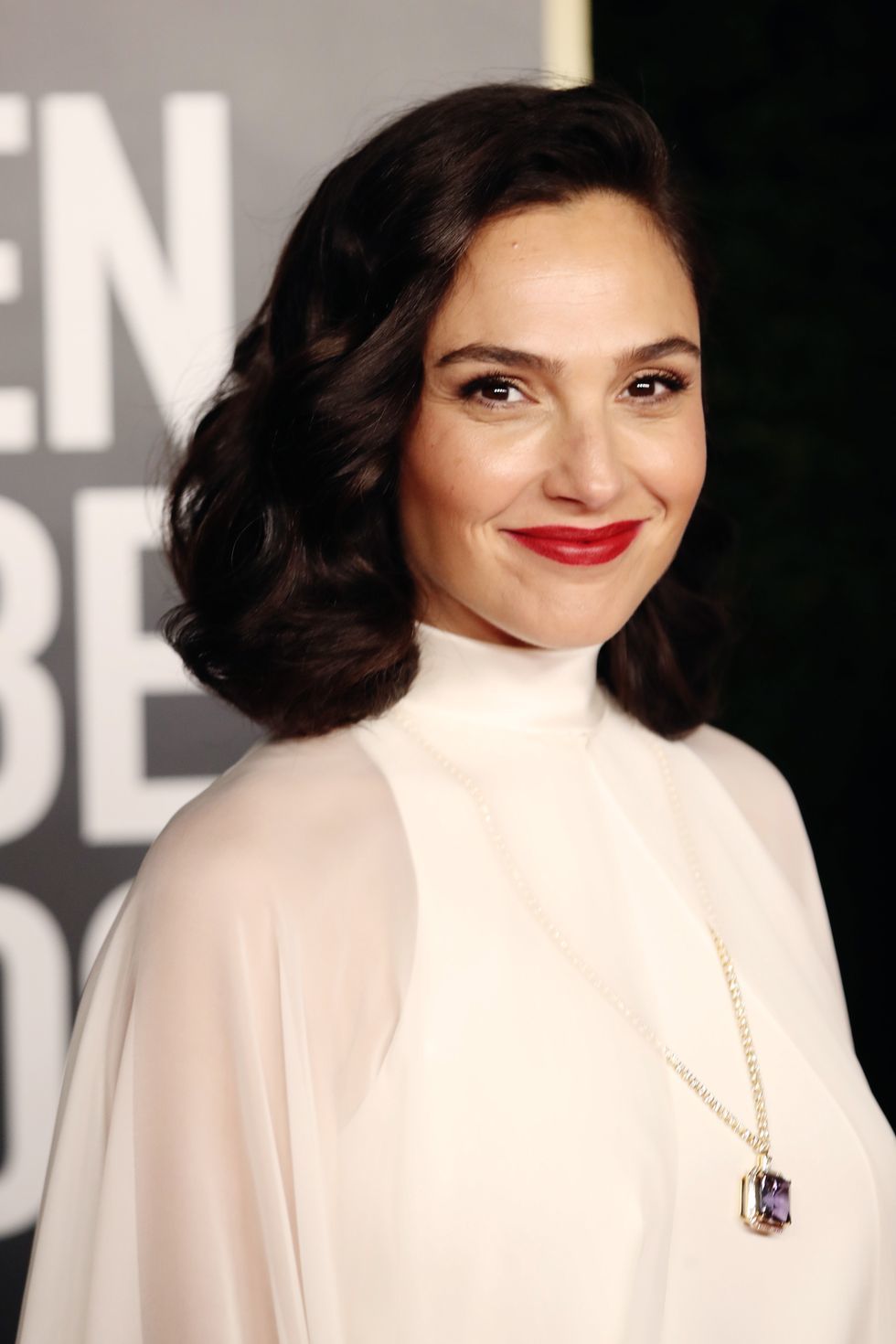 The secret to Wonder Woman's perfect skin? CurrentBody Skin’s LED Light Therapy Mask. Celebrity makeup artist Sabrina Bedrani prepped with the mask before she created the red carpet red lip. "Gal is wearing a beautiful white dress with a cape, so as a team we decided for a bold, chic, Hollywood look with a fresh dewy skin." If you want to try the look at home, first fill your lips with The Dior Contour #884 Célébre and then apply the Rouge Dior #884 Célébre to finish the look. 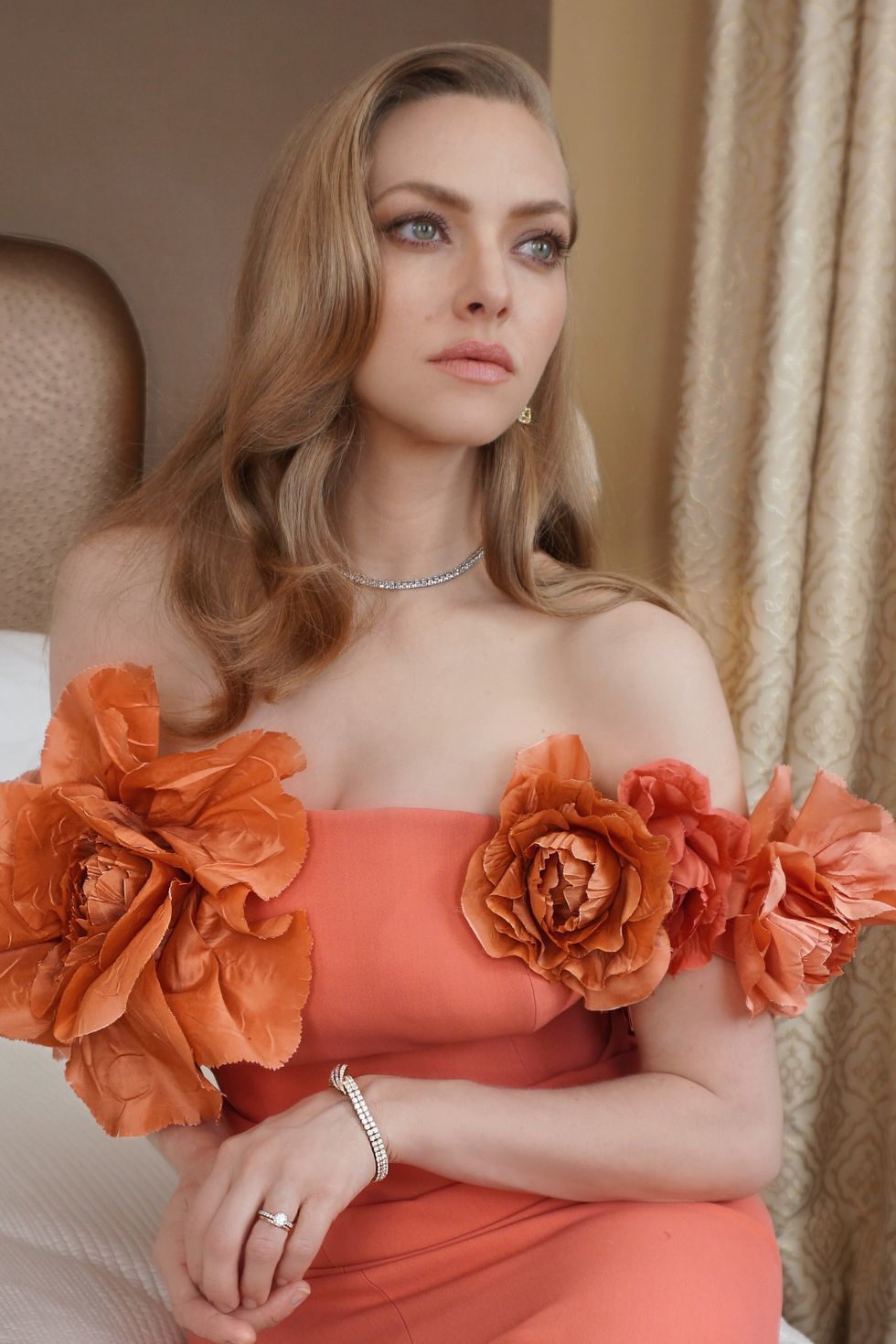 FEKKAI Artistic Director Renato Campora also went with a classic, old-Hollywood hairstyle. "Using a 1.5-inch curling iron, curl hair starting at the top," explains Campora. "Pin curls and let them cool for 10 minutes. Once cool, brush the curls with a multi-bristle brush until they open up. To finish, spray the FEKKAI Full Blown Volume Texturing Spray for added texture and volume. " 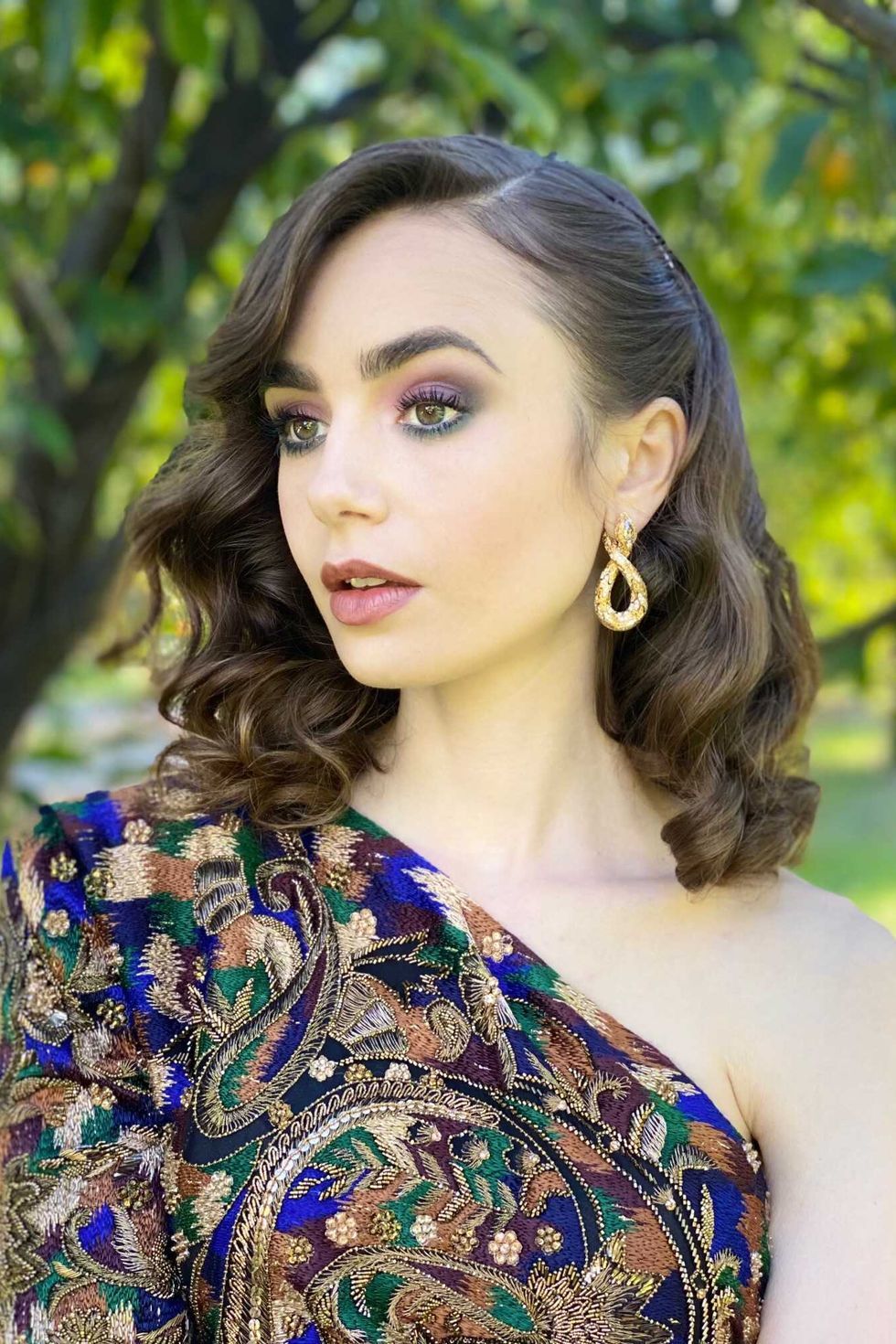 Hairstylist Gregory Russell created Collins' waves by taking her hair in small sections and curling with the ghd curve classic curl iron, setting each curl with a flat clip after.

For Collins' technicolor eye, Makeup Artist Fiona Stiles wanted to match the rich tones in the dress and her Cartier earrings. "The dress had a very elegant 70s feel to it, like something you would wear to Mr. Chow’s for dinner before going to a glamorous party at a Soho art gallery in the 70s," says Stiles. "I wanted to lean into the elegance and create a look that felt very sophisticated – a full face, with emphasis on eyes, lips, and cheeks – it’s the whole package.” Stiles used the deep metallic green and aubergine tones from Lancôme Color Design in Midnight Stone & Siren’s Emerald across the lid with a touch of Ombre Hypnose Stylo in Bronze drawn against the top lashes. 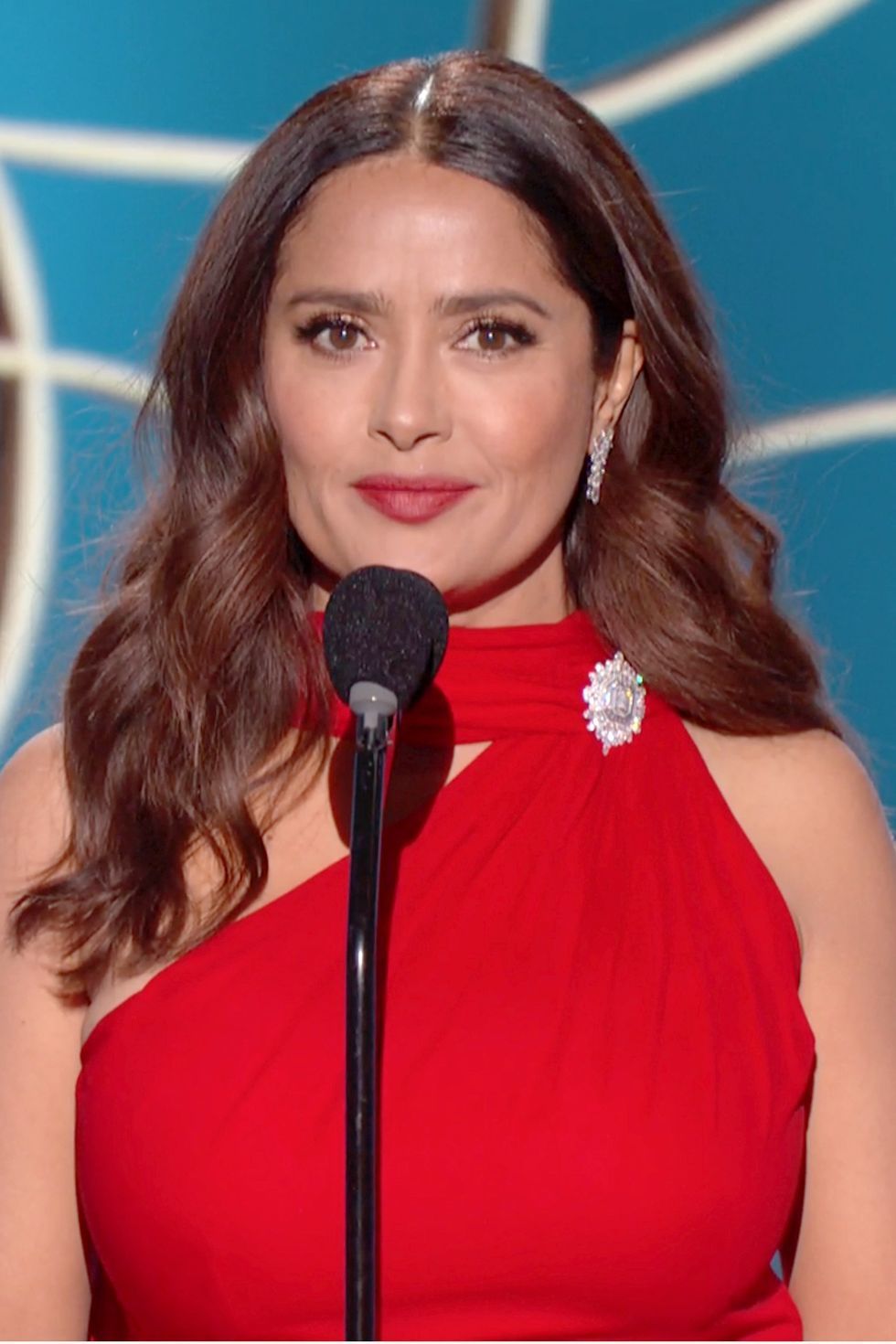 A dream collaboration we've been waiting for: Salma Hayek and Mario Dedivanovic aka Makeup by Mario. “We wanted to define and intensify Salma’s gorgeous brown eyes and compliment her striking red dress," says Dedivanovic. "We created luminous skin, matched with matte eyes with a touch of sparkle to make them pop." Dedivanovic used products from his line, first applying shade Matte 8 from the Master Mattes Eyeshadow Palette on Salma’s upper lids, from lash line to crease, to create the drama.

Then, he used shades Metallic 3 & 10 from the Master Metallics Eyeshadow Palette, smudging shades in her crease to make her eyes pop. To finish Salma’s eyes, he added a touch of the Master Crystal Reflector in Quartz on the lids for additional sparkle and shine. "I took my inspiration from beautiful berries that arrived whilst we were getting ready," explains celebrity makeup artist Kate Lee. "Using the Chanel LipScanner App, I was able to match the perfect shade of strawberries for her lips. For the rest of the look, I wanted to create a Spring look with a muted mauve matte eye, peachy cheeks, and strawberry lips!" The key to the perfect tinted lip on Haas is the new formulation of the Chanel Rouge Coco Bloom. "It’s so pigmented and that there are so many ways to use it," she adds. "You could do a super bold glossy lip or even a more intense balm and only use a tiny bit." You can join the waitlist for Rouge Coco Bloom here. Celebrity makeup artist Gita Bass prepped Tina Fey's skin for her hosting gig at the award show. She chose the Pause Well-Aging Fascia Stimulating Tool to add a bit of glow before moving into her full routine. The standout was Fey's LOVESEEN lashes in Inez. 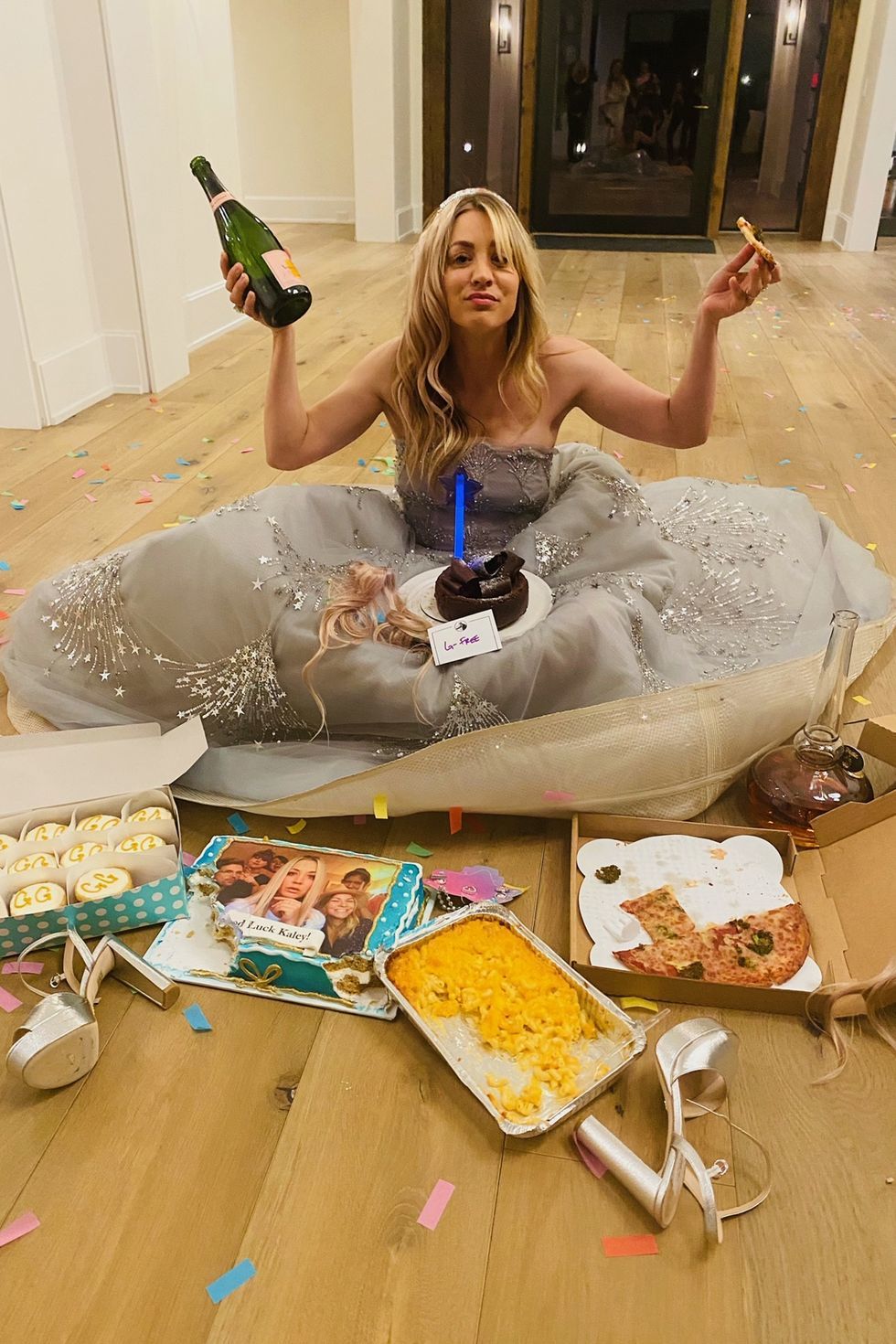 Relatable queen Kaley Cuoco went for the ultimate quarantine mood. Her touseled waves, courtesy of hairstylist Christine Symonds and the Clairol Professional Shimmer Lights Thermal shine spray, stayed all night and paired perfectly with pizza, mac and cheese, cupcakes, wine, a cake with the actress' face on it, and also more cake. 2021 is looking beautiful, ladies and gentlemen.