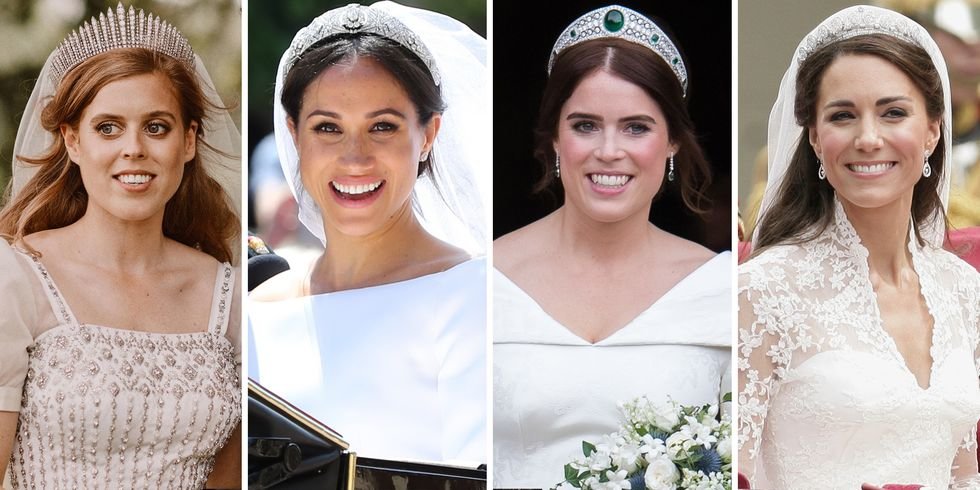 The Most Epic Royal Jewelry in History

For the British royals, jewelry is no mere adornment. From the stones to the settings, everything has significance–be it a political power play, a family heirloom or a national treasure.

Here, we take a closer look at the tiaras, earrings, rings, and neckpieces that make up the royal collection. 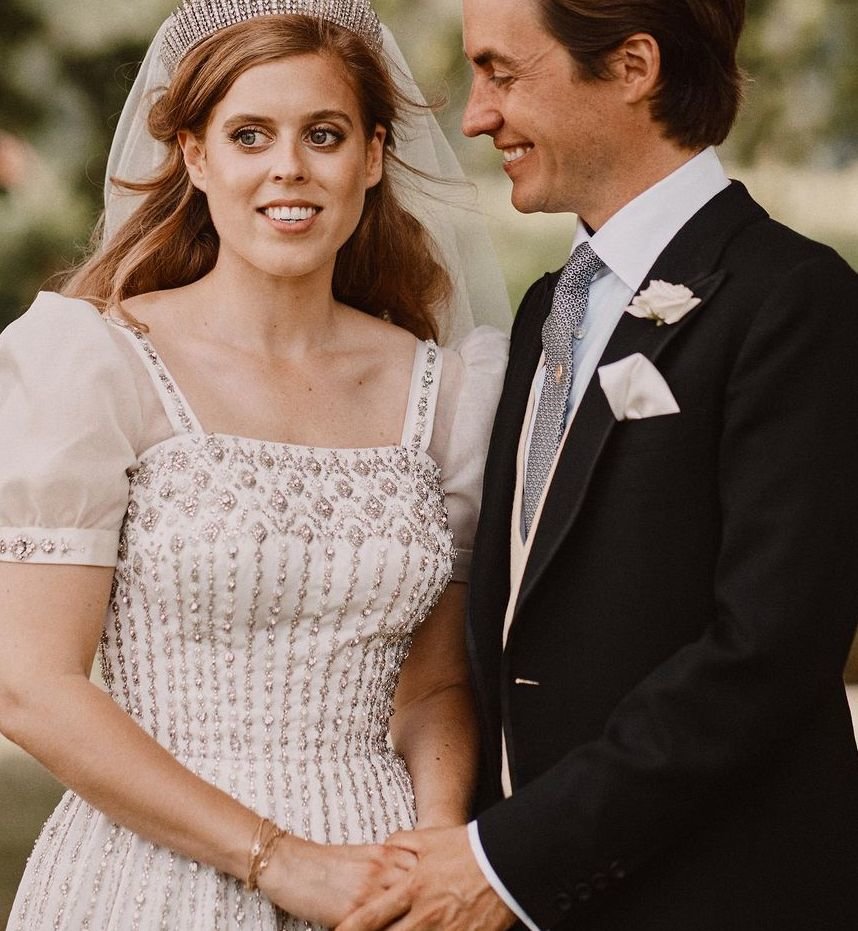 Queen Elizabeth II and Princess Anne both wore The Queen Mary Fringe Tiara on their wedding days, and Her Majesty loaned the piece to her granddaughter, Princess Beatrice of York, for her intimate wedding to Edoardo Mapelli Mozzi. The tiara, which many believe was selected due to both it's sentimental significance and its all-diamond design, which complemented the bride's Norman Hartnell gown also on loan from the Queen, marks the first time a modern royal bride has donned a tiara worn by another ancestral royal (let alone two) for her wedding day. According to Town & Country, given Beatrice and Edo's postponement of a larger-scale celebration due to the pandemic, the Queen likely chose this piece with far greater symbolism in mind: to signify the royal family's history, as well as solidarity, strength, and endurance. 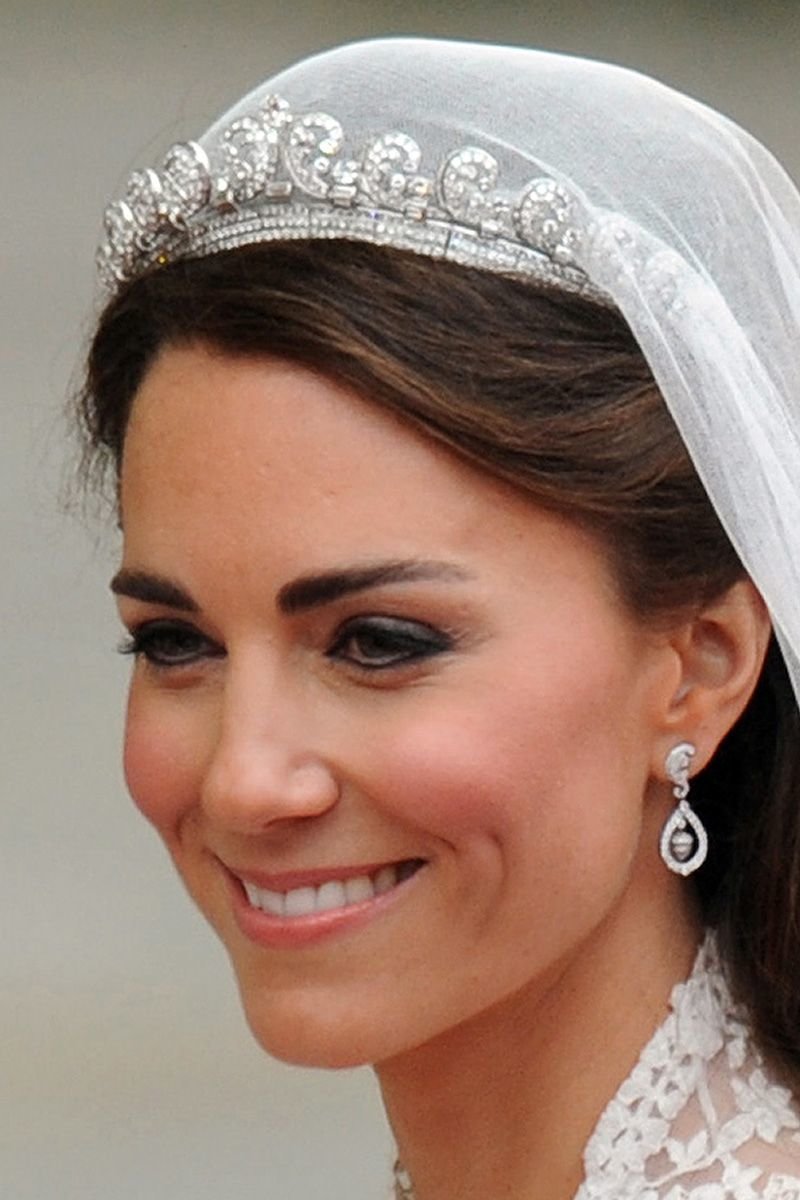 The tiara worn by the Duchess of Cambridge on her wedding day was on loan from the Queen and was originally a wedding anniversary gift from King George VI to his wife Elizabeth (also known as the Queen Mother) in 1936. The Queen Mother then gifted it to the Queen on her 18th birthday. It contains over 1,000 diamonds and was also worn occasionally by Princess Margaret. The showstopping bandeau tiara worn by Meghan, Duchess of Sussex, on her wedding day was made by Garrard in 1925 for the Queen's grandmother, Queen Mary. It originally had a sapphire centerpiece, but it has since been changed to a diamond. It was loaned to Meghan by the Queen for her wedding day. The tiara was also worn by the late Princes Margaret, the Queen's sister. 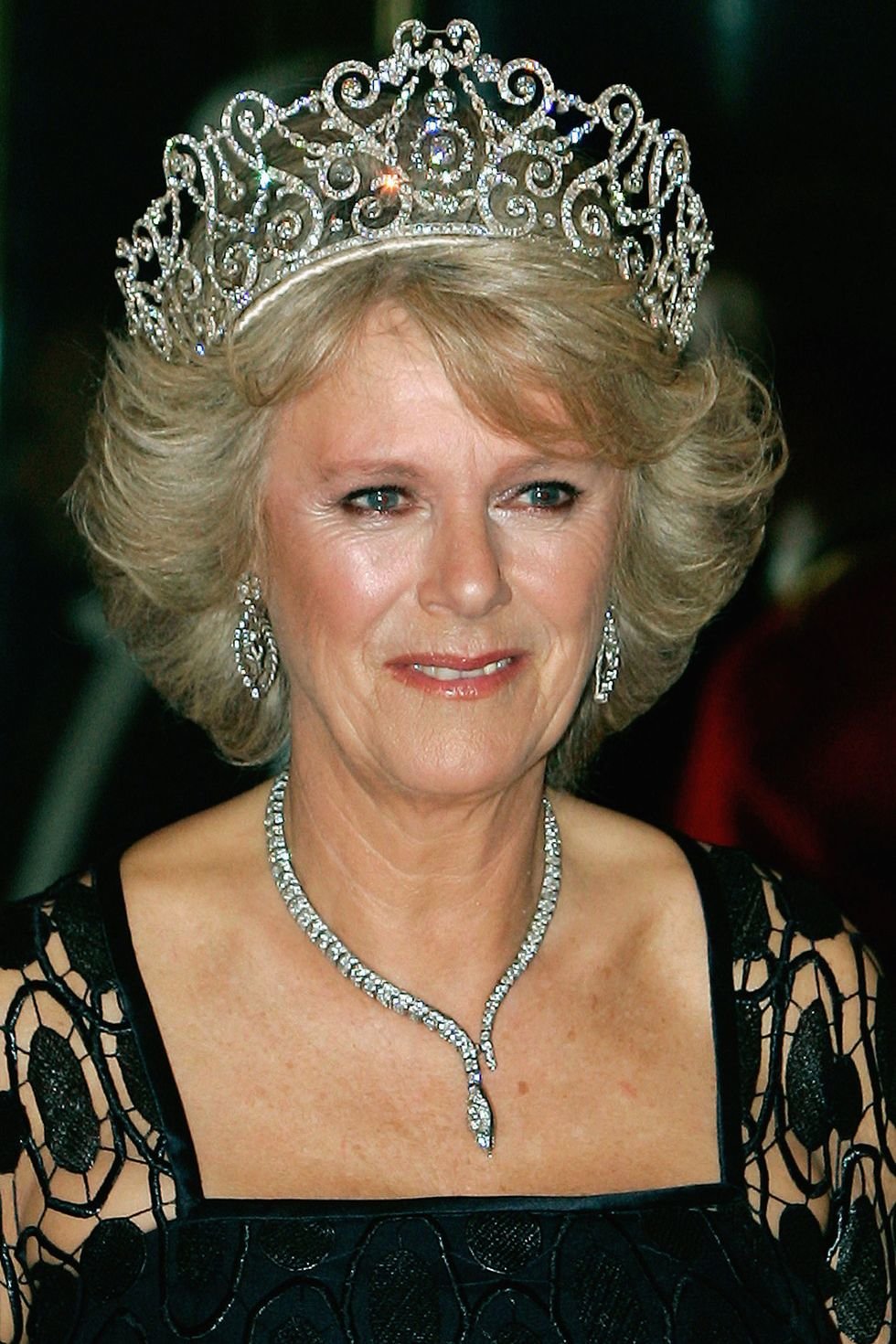 The Delhi Durbar tiara is one of three on loan from the Queen to her daughter-in-law Camilla, Duchess of Cornwall. Made by Garrard, it was originally made for Queen Mary in 1911 for a celebration in Delhi to mark the coronation of King George V and Queen Mary as Emperor and Empress of India. 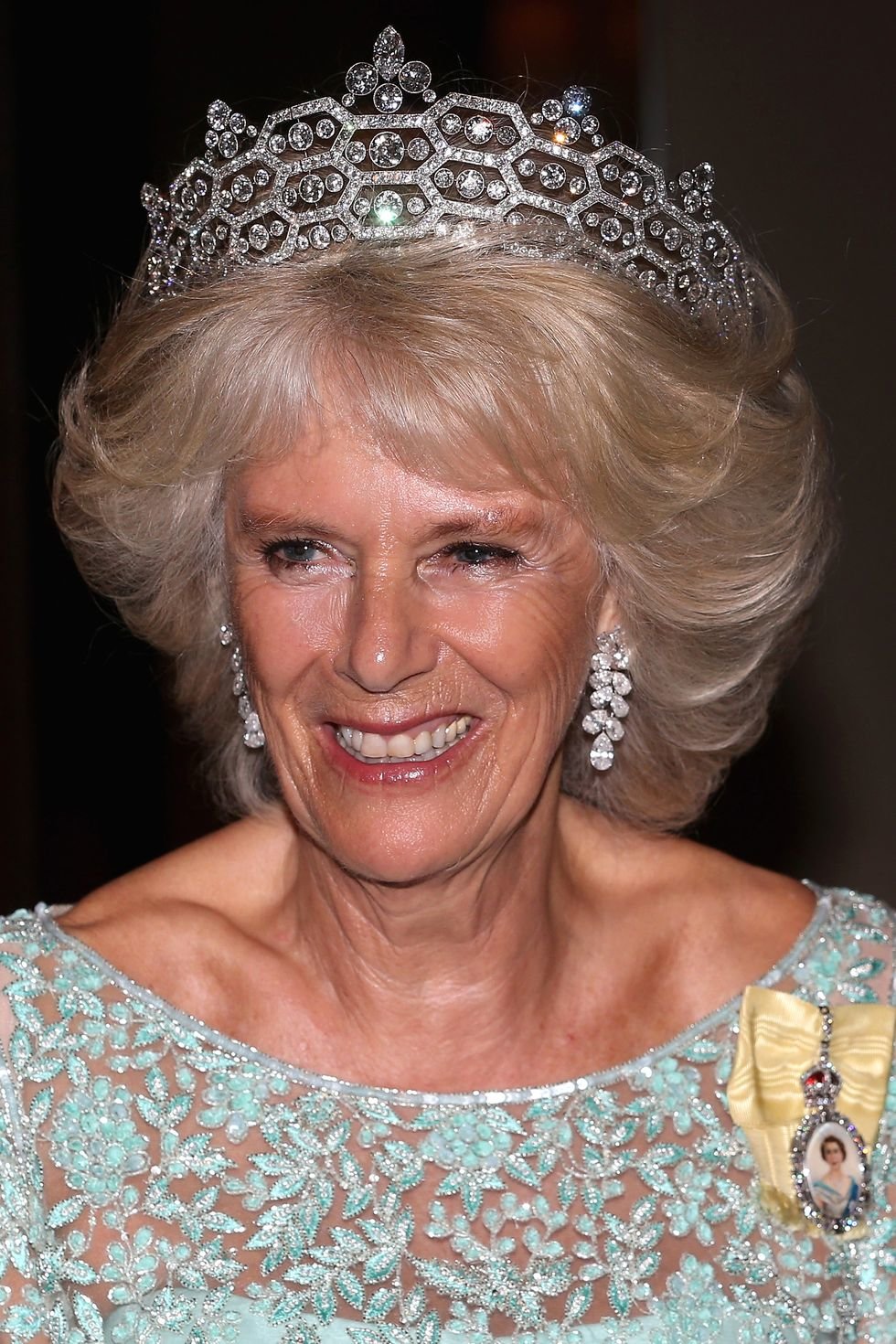 The Greville tiara was made by Boucheron for Dame Margaret Helen Greville in 1920. It is also known as the Boucheron Honeycomb tiara, and is worn here by Camilla, Duchess of Cornwall. Greville left the tiara to the Queen Mother when she died in 1942, and upon the death of the Queen Mother in 2002, the Queen inherited the headpiece. It is now one of three tiaras on long-term loan to Camilla, who married Prince Charles in 2005. 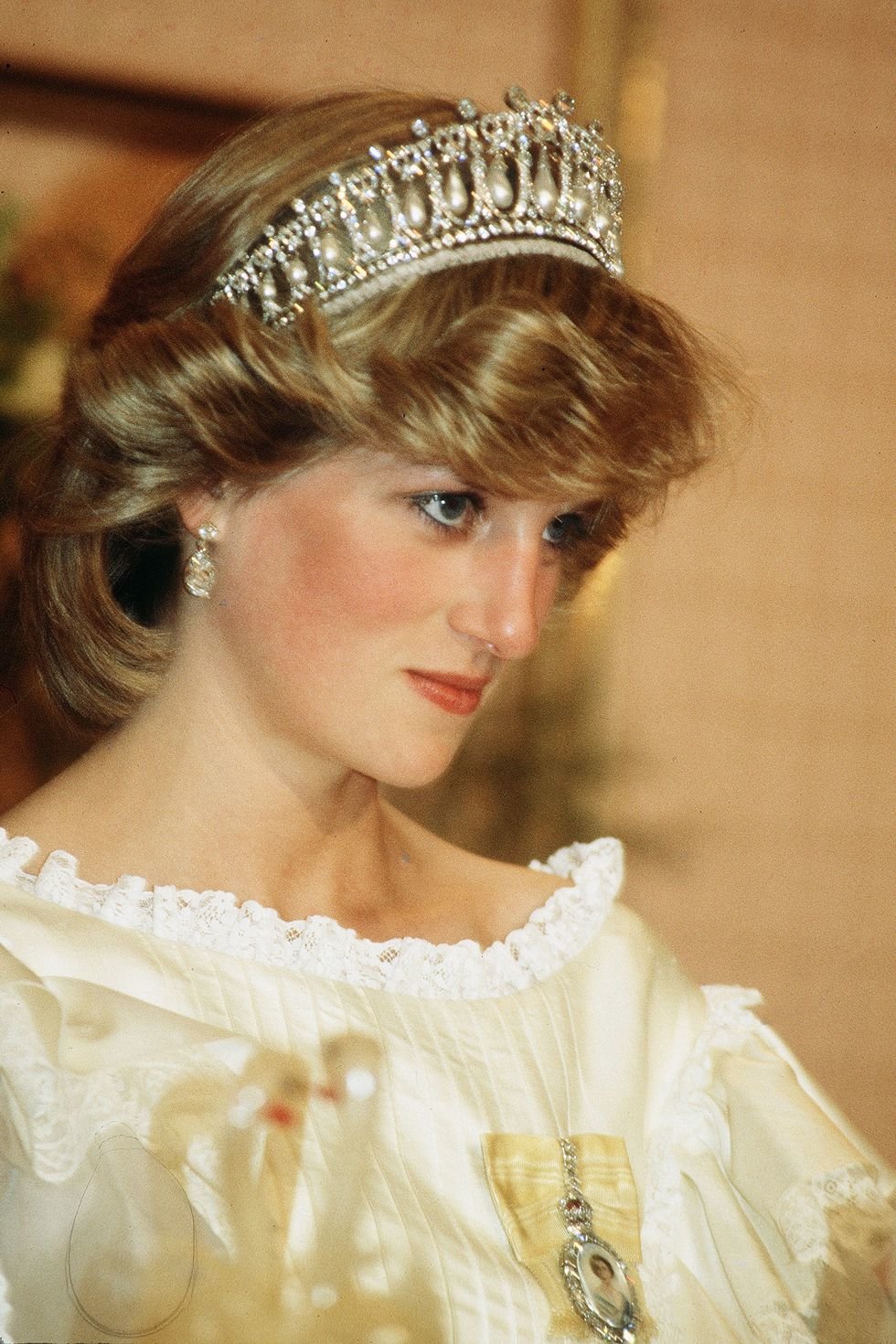 Also known as Queen Mary's Lover's Knot tiara, this diamond and pearl headpiece was commissioned by Queen Mary in 1913 when she had asked British jeweler Garrard to replicate a tiara owned by her grandmother, Princess Augusta of Hesse-Kassel. It was inherited by the Queen, who gave it to Princess Diana when she married Prince Charles, but it was returned to the Queen after the couple divorced in 1996. Today it is owned by the Queen and remains a favorite with the Duchess of Cambridge, who borrows it for special occasions. 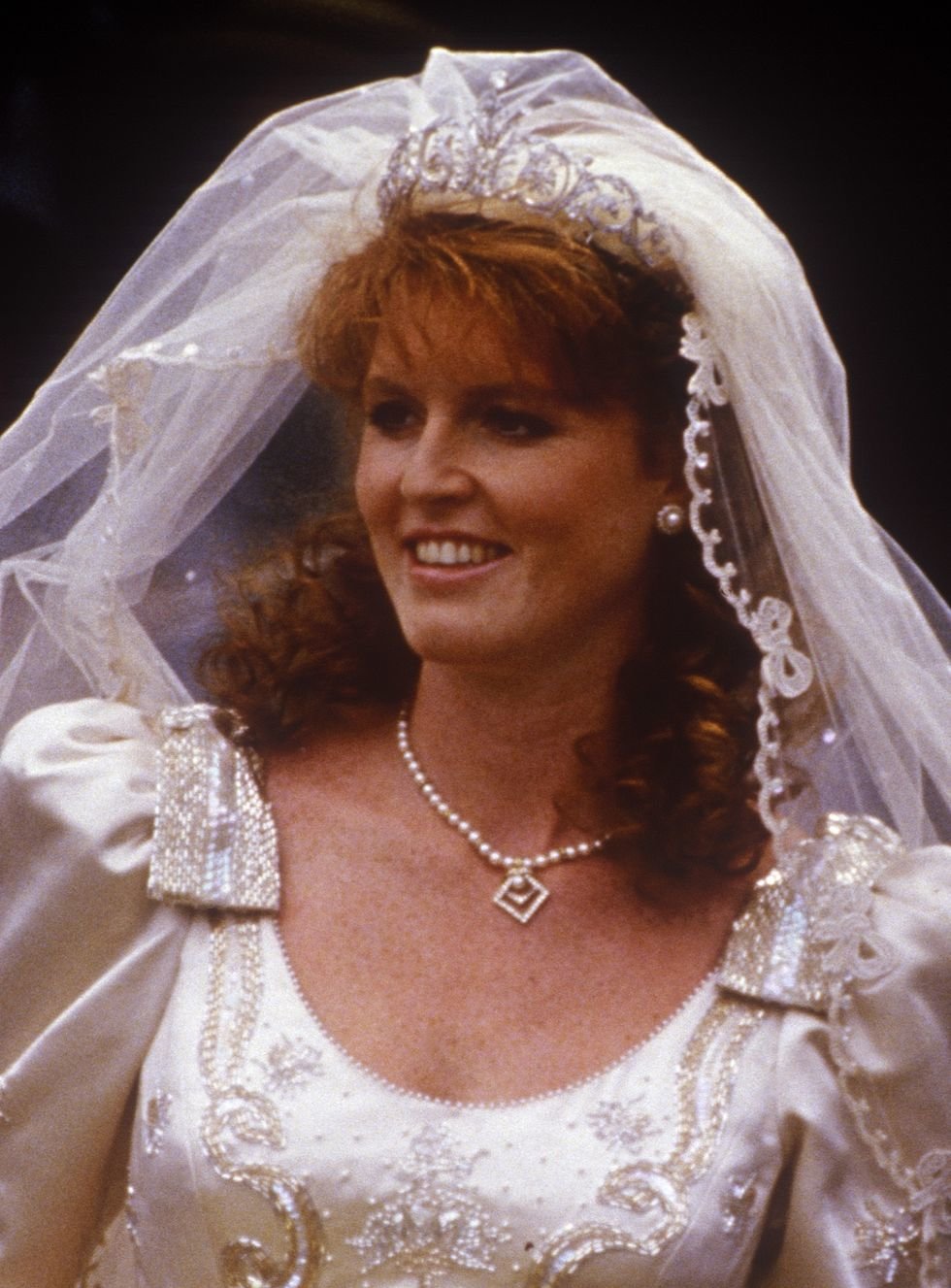 The York tiara was worn by Sarah Ferguson when she married Prince Andrew in 1986, and was a wedding gift from the Queen and the Duke of Edinburgh. Made by Garrard, Fergie hid it under a flower crown for her journey to Westminster Abbey. She has since split from Andrew, but retains ownership of the tiara. It is the piece most likely to be worn by her daughter, Princess Eugenie, on her wedding day. 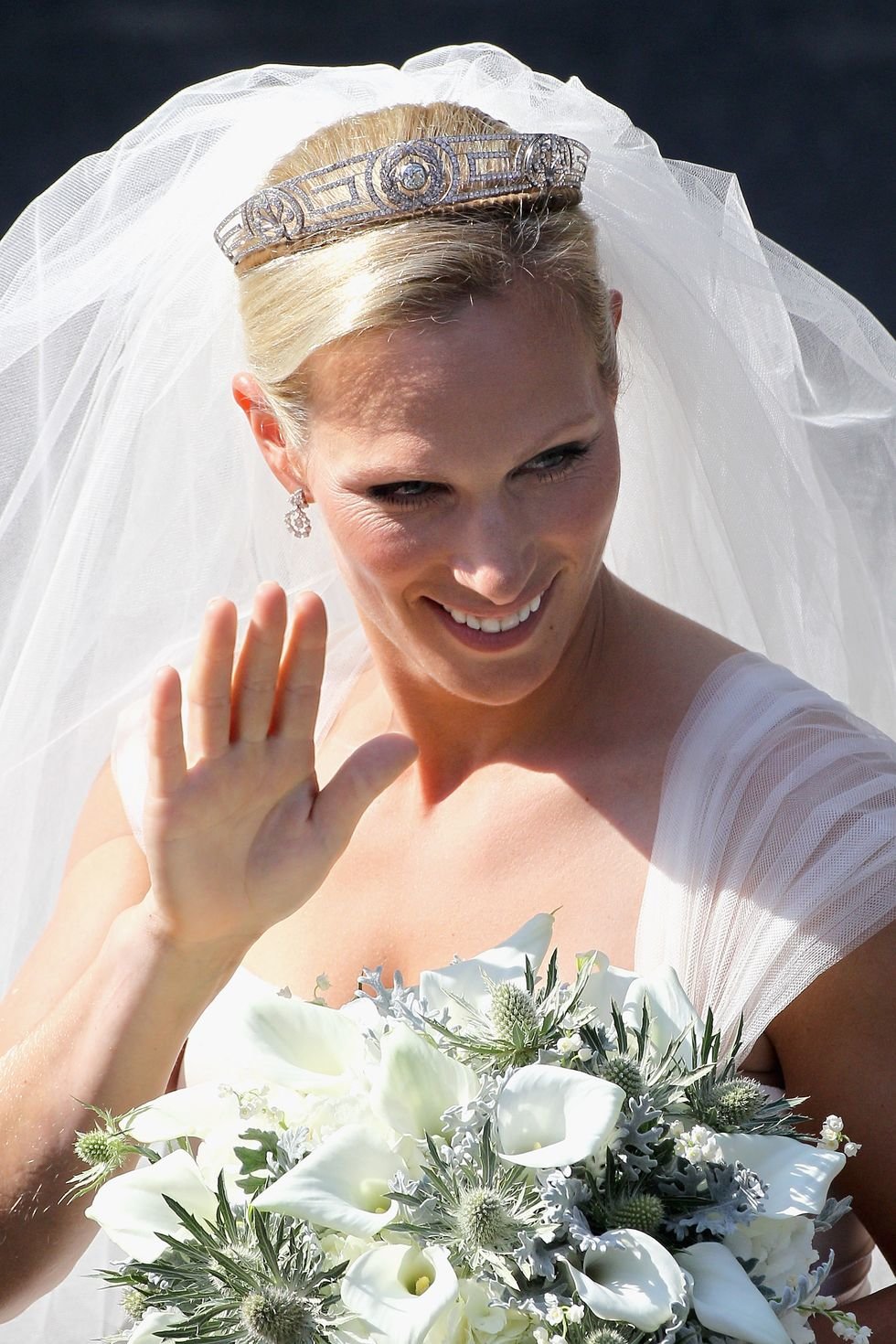 This tiara was a wedding gift to the Queen from her mother-in-law, Princess Alice of Greece and Denmark. The Queen gave it to her daughter Princess Anne in 1972, who wore the tiara in her engagement photos with Captain Mark Phillips. It was also worn by Princess Anne's daughter, Zara Tindall, on her wedding day in 2011. 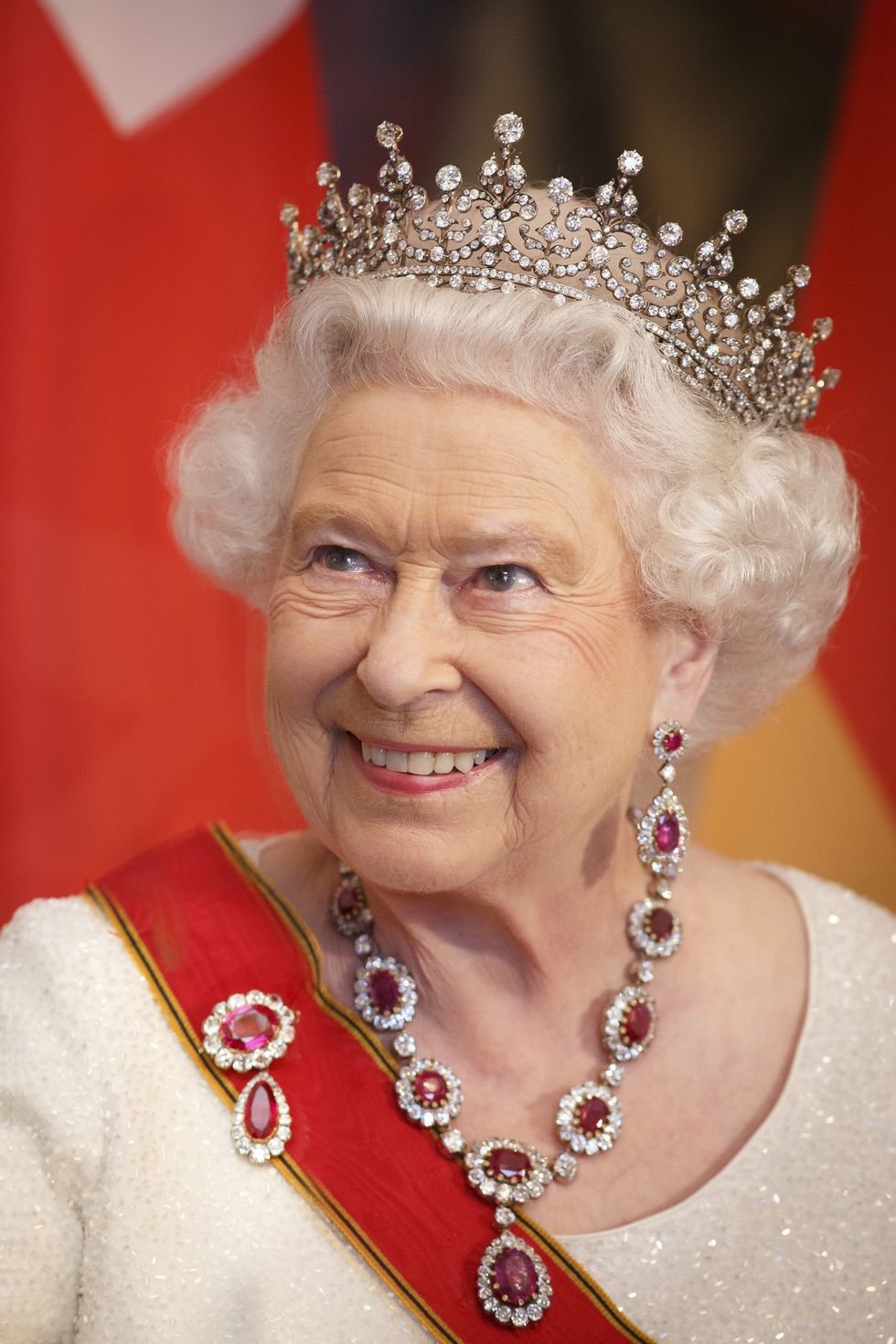 The Girls of Great Britain and Ireland tiara is the headpiece most frequently worn by the Queen–it's even featured in her portrait on British currency. The tiara was a wedding gift from her grandmother, Queen Mary, and the first she owned herself. The tiara was originally a wedding gift for Mary when she married the Duke of York, who later became George V, in 1893. It was from the girls of Great Britain and Ireland, and commissioned by a committee lead by her friend, Lady Eve Greville. 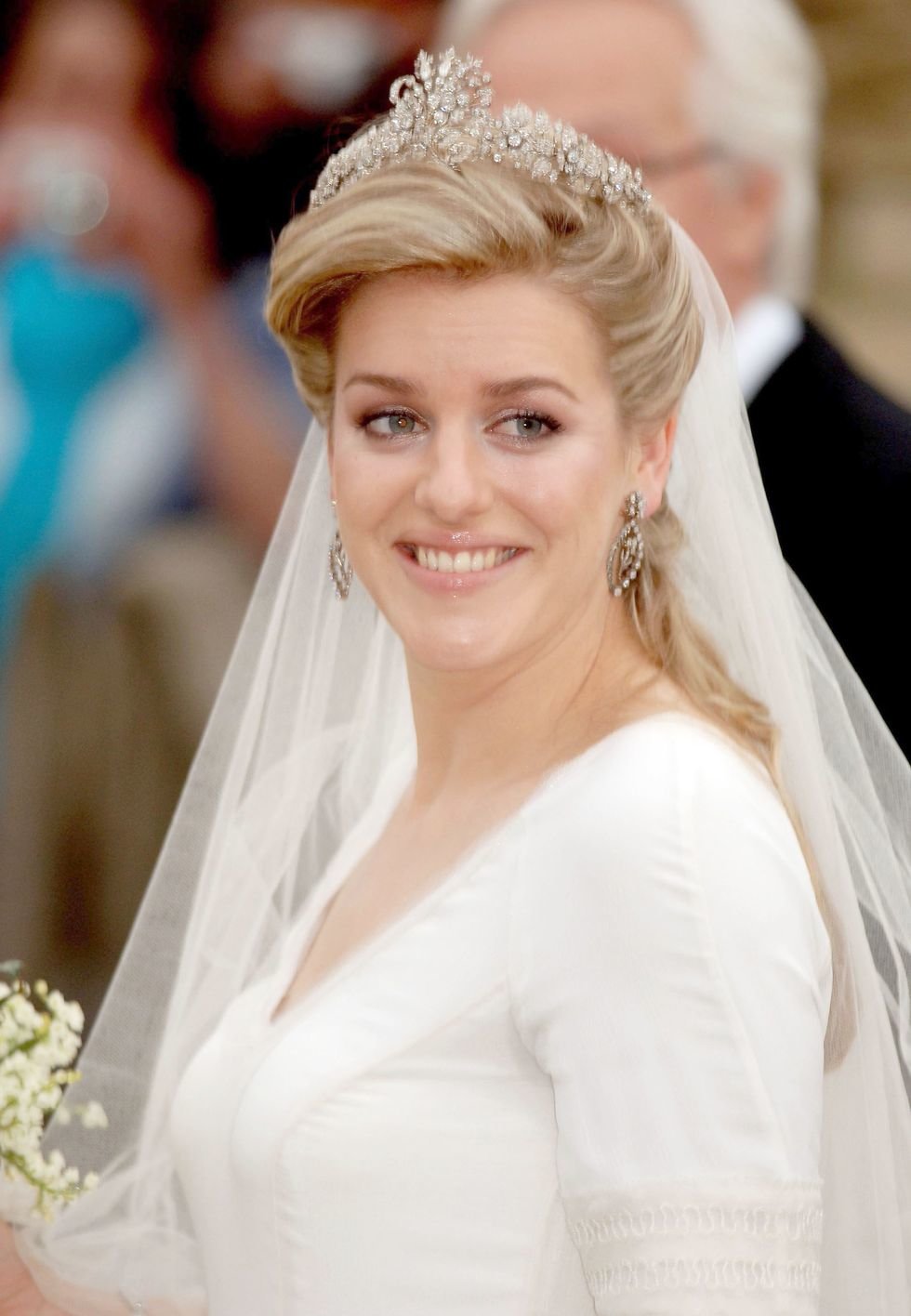 This tiara was worn by Laura Lopes, the daughter of Camilla, Duchess of Cornwall, for her wedding in 2006. Camilla also wore it for her first wedding to Andrew Parker-Bowles, and has been pictured in it as recently as 2015. 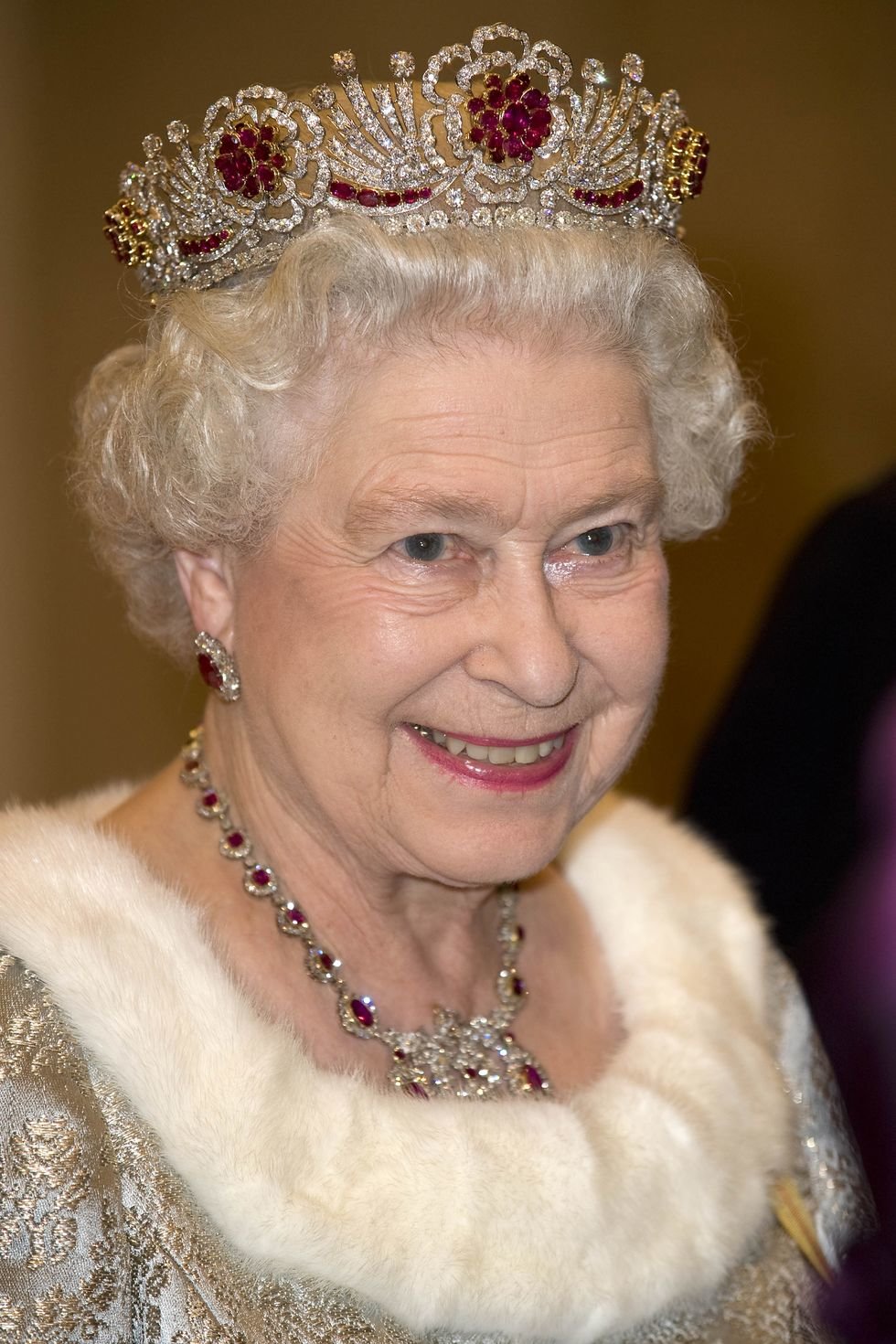 The Queen had the Burmese Ruby tiara made by Garrard in 1973. It features 96 rubies that were gifted to her by Burma (now Myanmar) when she married the Duke of Edinburgh in 1947. The diamonds were also a wedding gift, from the Nizam of Hyderabad, the monarch of the Indian state of Hyderabad.

The Festoon tiara belongs to Princess Anne, who loaned it to her daughter-in-law, Autumn Phillips, for her wedding day. The tiara was originally gifted to Anne in 1973 by the World-Wide Shipping Group after she christened one of its ships.