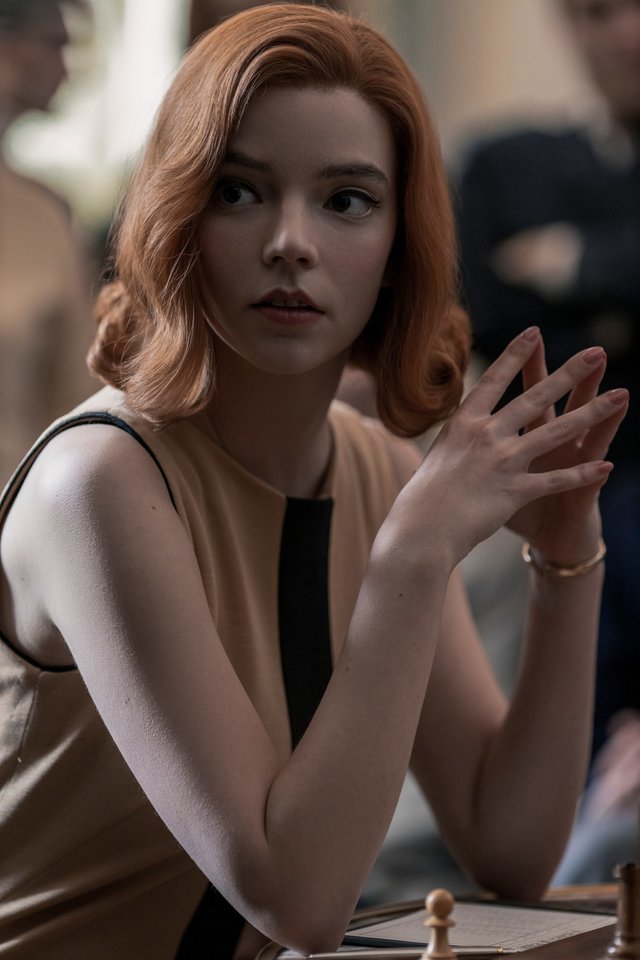 The Story Behind Beth Harmon’s Red Hair in The Queen’s Gambit, According to the Show’s Hair and Makeup Artist

“I [always think of myself] as a prop man to the face,” says Hollywood’s leading hair and makeup artist, British-born Daniel Parker, whose impressive CV includes credits on Troy (2004), Zero Dark Thirty (2012) and TV series Chernobyl (2019).

Parker’s most recent work, though, can be seen lighting up the small screen on the hit Netflix show The Queen’s Gambit.

Written and directed by Scott Frank, and based on the 1983 Walter Tevis novel of the same name, the series stars Anya Taylor-Joy as formidable chess prodigy, Beth Harmon. Set in the late 1950s and early 1960s, it’s a coming-of-age tale which sees Beth evolve from an orphan child to headstrong young woman, fighting to be seen in a male-dominated world of chess. And it is Parker’s exquisite yet subtle hair and beauty looks that help narrate this journey.

There’s Beth’s clinical, utilitarian micro-fringe haircut to signify a stripping of identity as she first joins the orphanage, which eventually softens into a side-parted bob of cascading curls as she matures into an elegant young woman. Then there’s the perfectly powdered face, neatly lined eyes, and bold red lip, which smudges and smears as she falls into the grip of alcohol and drug addiction.

We caught up with Parker to find out more about his creative process, the importance of authenticity and why he chose to make The Queen’s Gambit’s Beth a redhead. 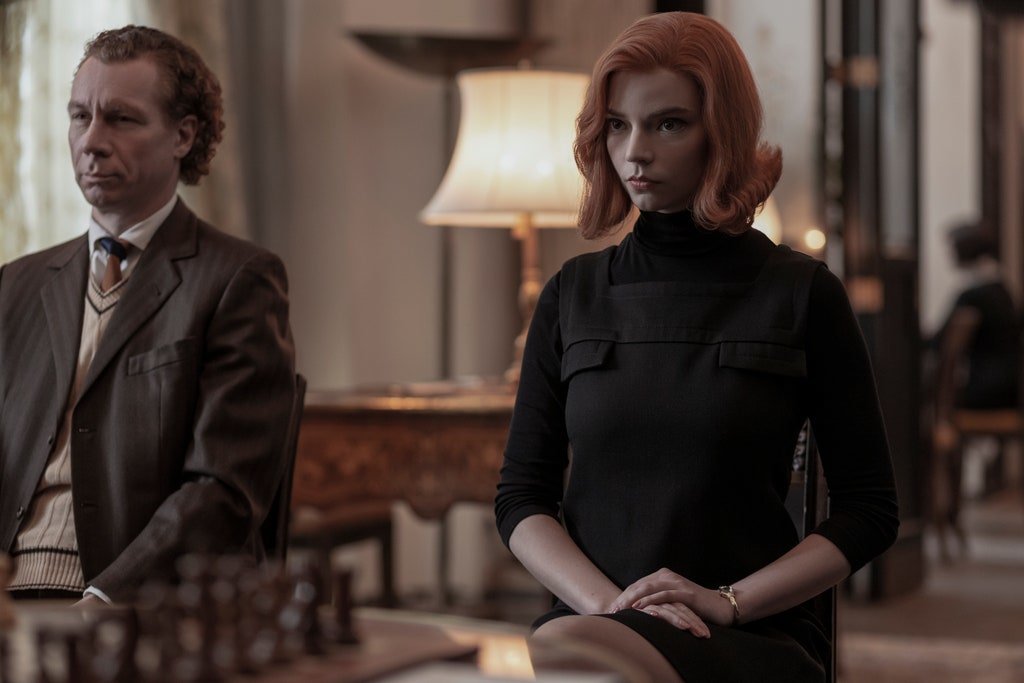 When approaching a project such as The Queen’s Gambit, where do you start and what’s the biggest challenge?

I read the scripts, then I have an image in my mind, and I start working on that. The biggest challenge is to produce something that achieves what the script demands, mixed with the director’s vision and my own vision. The challenge these days is to also keep everything real and not tampered with in any way by computer work, so you’ve actually got something that looks real.

How important are Beth’s looks to the show’s plot?

They’re essential. She goes from being baby Beth to grown-up Beth. The makeup and hair had to tell that story. They have to age her; to show her becoming more mature; her becoming an alcoholic drug addict. It’s the makeup and hair that you see in all the close ups. If that’s wrong, if it doesn’t move forward correctly, then it won’t work. The costume is just as important. It’s a whole process, especially as the series spans so much time.

In the book, Beth has brown hair, but in the series she is a redhead. Why was it important to make that change?

It came from reading the script. To me, she was always a feisty redhead. The funny thing is that when I met the director, Scott, and said, ‘There is one thing: I think she should be a redhead.’ He said, ‘Absolutely, I agree.’ Then I met Anya and I said, ‘What do you think about Beth being a redhead?’ And she said, ‘What do you mean? Of course she’s a redhead.’ It was quite unusual. Sometimes, you have to fight for these things.

The way the script was written, you really knew how the characters were going to be. But then, of course, you see the cast and you do a U-turn. Mrs Wheatley [Beth’s adoptive mother], for instance, was originally going to be blonde, but she’s a dark brunette and looks fantastic with it. That was a decision I had to make quickly. 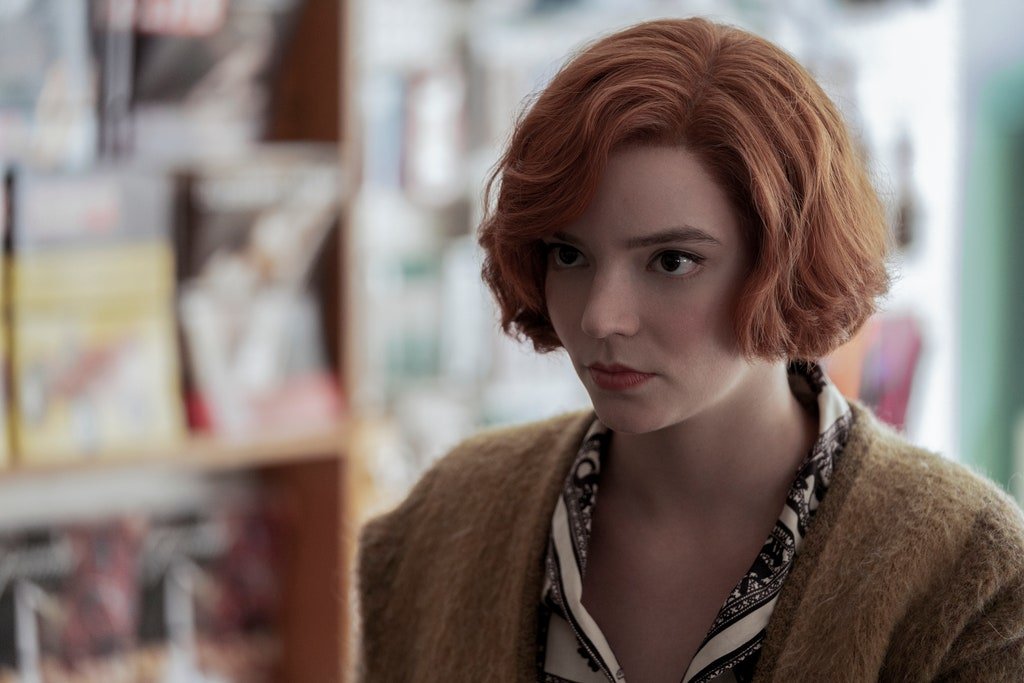 Was there a particular message you wanted to convey about Beth’s character through the language of hair? There was the micro-fringe when she was at the orphanage, then the cascading curls as she became a woman.

The hair tells a lot of the story. As do the costumes, which were beautiful. It’s about growing up, about a poor little girl who loses her mother and the first thing that happens to her is that she’s defrocked and her hair is chopped off. I had to fight tooth and nail for that micro-fringe. It wasn’t popular, but it was so effective and tells a story just by itself. That hideous little haircut that all the orphans were given. I wanted to make it worse, but I wasn’t allowed to-none of the mothers would allow it.

How would a Vogue reader go about recreating grown-up Beth’s hairstyle?

You need a wonderful haircut first and foremost. If you get the cut wrong, you’re not going to be able to achieve it. You’ve got to have somebody who understands hair and what you want to do with it. All of the hair that was done for The Queen’s Gambit was done in a period way. It was done with hot rollers and overnight setting. If you want it to look right, you have to use the tools of the period. There’s no way around it. And, of course, they were all wigs, so it is slightly different. 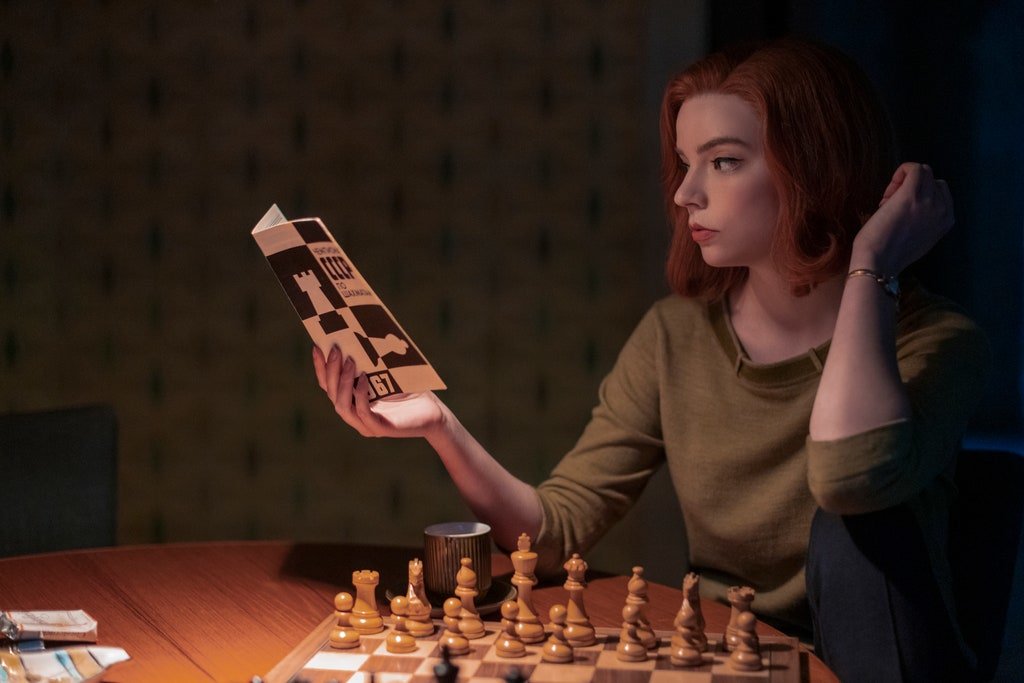 What about Beth’s beauty looks? Where did the inspiration for her makeup come from?

The main inspiration behind Beth’s hair was actress Natalie Wood. You also have Rita Hayworth and Lauren Bacall, and the sleekness and beauty of Grace Kelly. It’s a wonderful era-the powdered look, the eyeliner, the lips, the blusher that’s put on really beautifully. It’s perfection without being overly made-up. And the great thing about working like that is when Beth was supposed to look like shit, we just took off the makeup. We removed the powder so that the shine came through and it just looks wrong, so you know she’s not well.

Is there anything you haven’t done in your career that you’ve always dreamed of doing?

I’m doing something next year that I’ve always wanted to do. I’m opening myself up to a big can of worms-I do love a challenge. It’s an 18th-century period production with massive wigs-one of the wigs I’ve already got hold of is [4 feet] high! But I don’t want to approach it in a way that’s been done before. I spoke to the director and said, ‘These people smell disgusting. I want to make them smell just by looking at them,’ which is something that hasn’t been done for any film of that period.