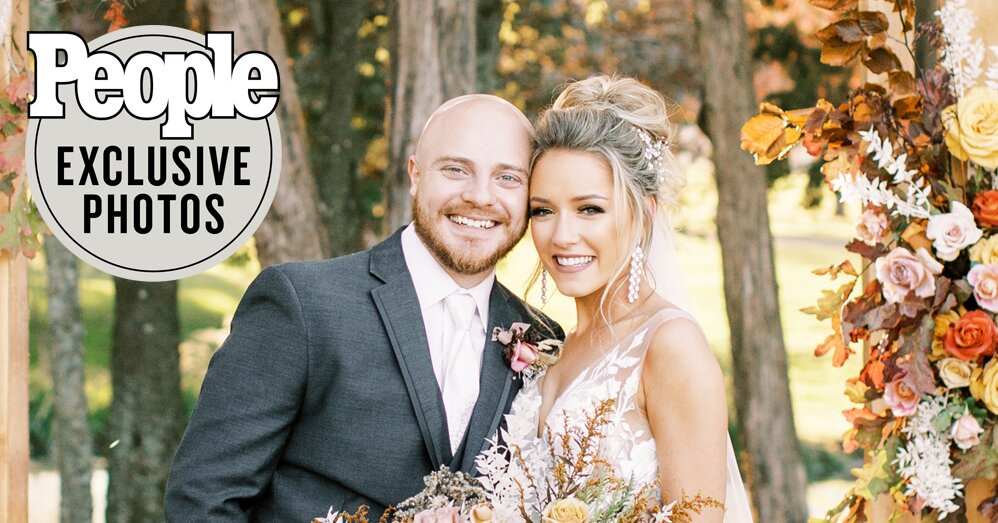 "We decided two weeks before to get married outside, which was never the original plan, but we knew it would be the best decision for everyone's safety," the country singer tells PEOPLE

Mere months before leaving her Tennessee home to follow her musical dreams on Season 9 of The Voice back in 2015, a then 16-year-old Emily Ann Roberts met a boy in her high school Spanish class - a boy who grew up to be the man who she can now call her husband.

In an afternoon service on the picturesque grounds of Marblegate Farm in Friendsville, Tennessee, Roberts, 22, married fiancé Chris Sasser, also 22, after five years of dating – and PEOPLE has all the exclusive details.

Fans will recall that the two got engaged last October on the occasion of Roberts' 21st birthday. And from that moment on, the couple has had their heart set on a fall wedding.

"The fall season has always been a favorite of ours, especially with growing up so close to the Smoky Mountains," Roberts tells PEOPLE. "We always make trips to the mountains to see the gorgeous colors of the leaves before they fall, so when we were picking our wedding date and colors, we knew we wanted to pull inspiration from the beautiful colors of fall in East Tennessee."

The beaming bride wore an exquisite bridal gown designed by Wtoo by Watters and purchased earlier this year from Lillian Ruth Bride in Knoxville, Tennessee.

"I tried on so many dresses that I loved, but the one I picked truly just felt like me," explains the Season 9 Voice runner-up. "I felt like a bride. It's everything I wanted in one dress — fun, big, sweet and unique. The lace flower detail added a sweet country touch that I love." 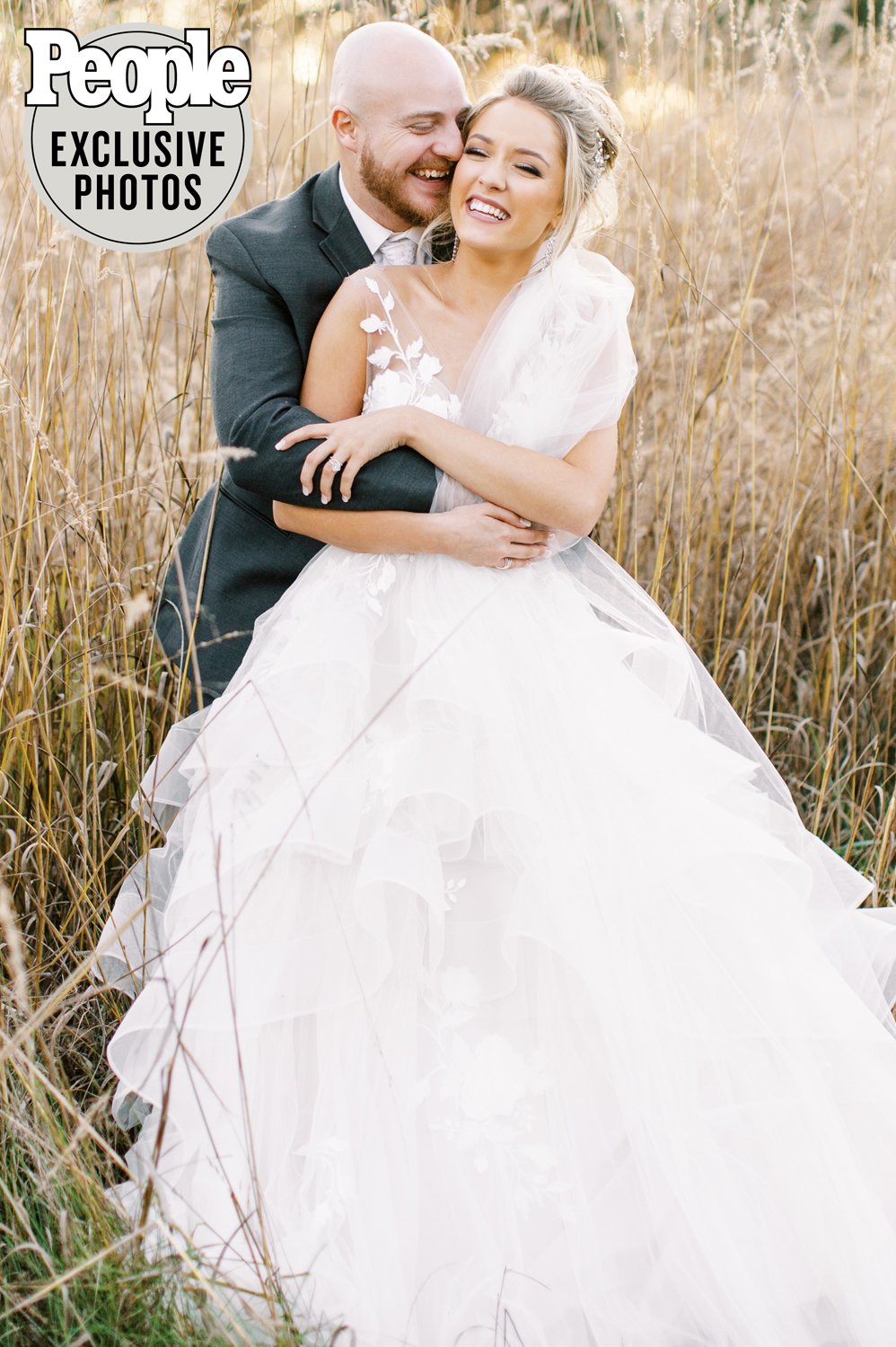 Clutching her nana's old handkerchief in her hand and wearing a wedding veil borrowed from her older sister Abigail, the beautiful bride was greeted at the end of the aisle by not only her sister and her soon-to-be-husband, but also a wedding party made up of her and Sasser's very best friends.

"When we were picking our wedding party, we knew we wanted the people who have been through everything with us and will continue to be there for us through thick and thin," Roberts tells PEOPLE. 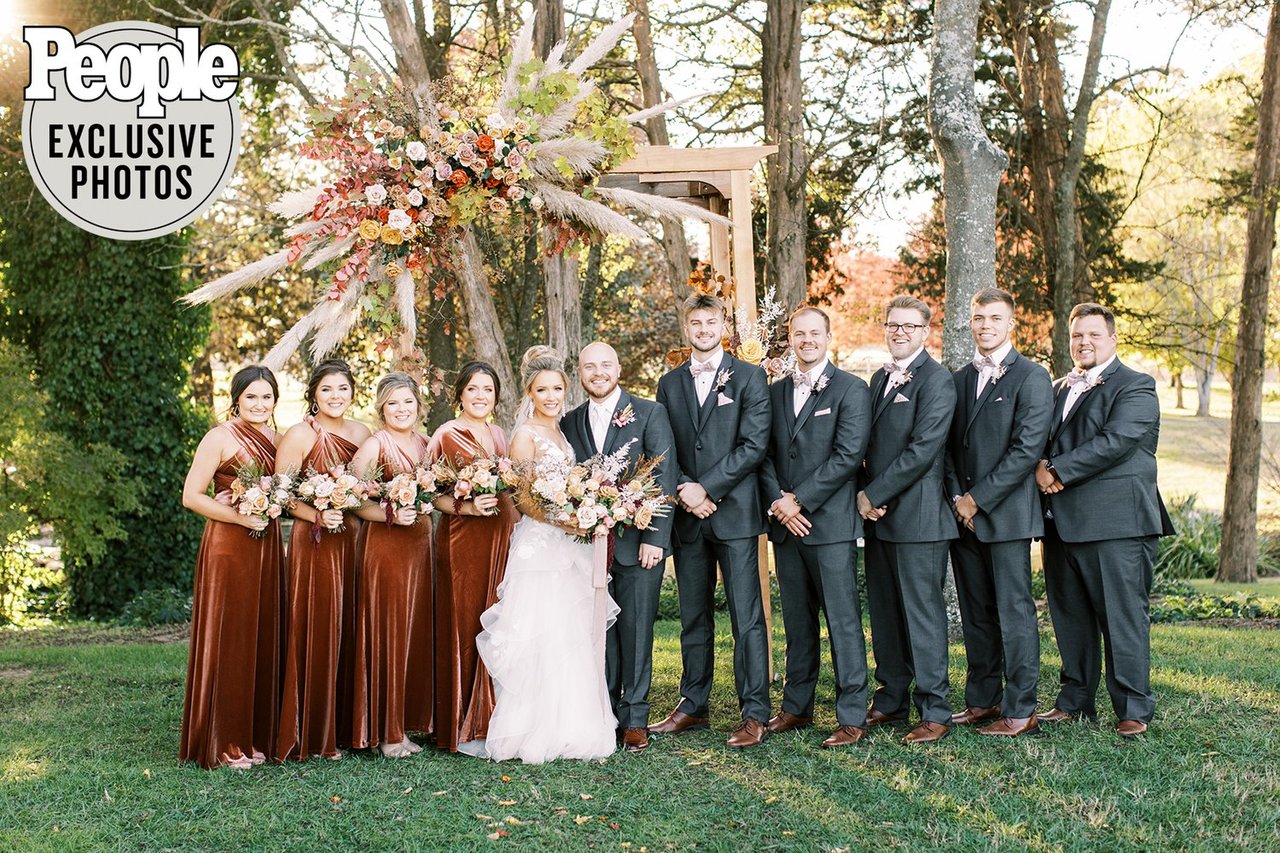 Obviously, music served as a backbone to the entire day, with Roberts walking down the aisle to a song called "Infinity" that she wrote alongside singer/songwriter Stephanie Chapman.

"The song is really about my relationship with Chris and how forever just didn't seem like a long enough time to love him," explains Roberts, who recently released her new single "Change My Tune." "I asked our string quartet to learn it and it turned out absolutely perfect."

Faith also served as an essential part of the wedding day, with both Roberts and Sasser's mothers on hand to share their favorite piece of marriage scripture during the ceremony. The couple also partook in holy communion as their first act as a married couple, utilizing a Bible hand-painted by Tennessee-based Magnolia Light that was then used as the guest book for the day.

"We are very strong in our faith in Jesus and our relationship with Him," says Roberts, who will also use the bible as the couple's first family Bible.

Roberts' lifelong pastor Todd Halliburton served as the wedding officiant, having met Sasser, a sales rep, five years ago during a church function. And it was Halliburton who lovingly watched as the couple recited their traditional vows to one another, vows that had a particularly special meaning to the couple.

"My mom and dad memorized their [vows] for their wedding and my mom still repeats them to this day to my dad," explains Roberts. "I've grown up hearing them and dreaming of saying those same words to the man God had for me." 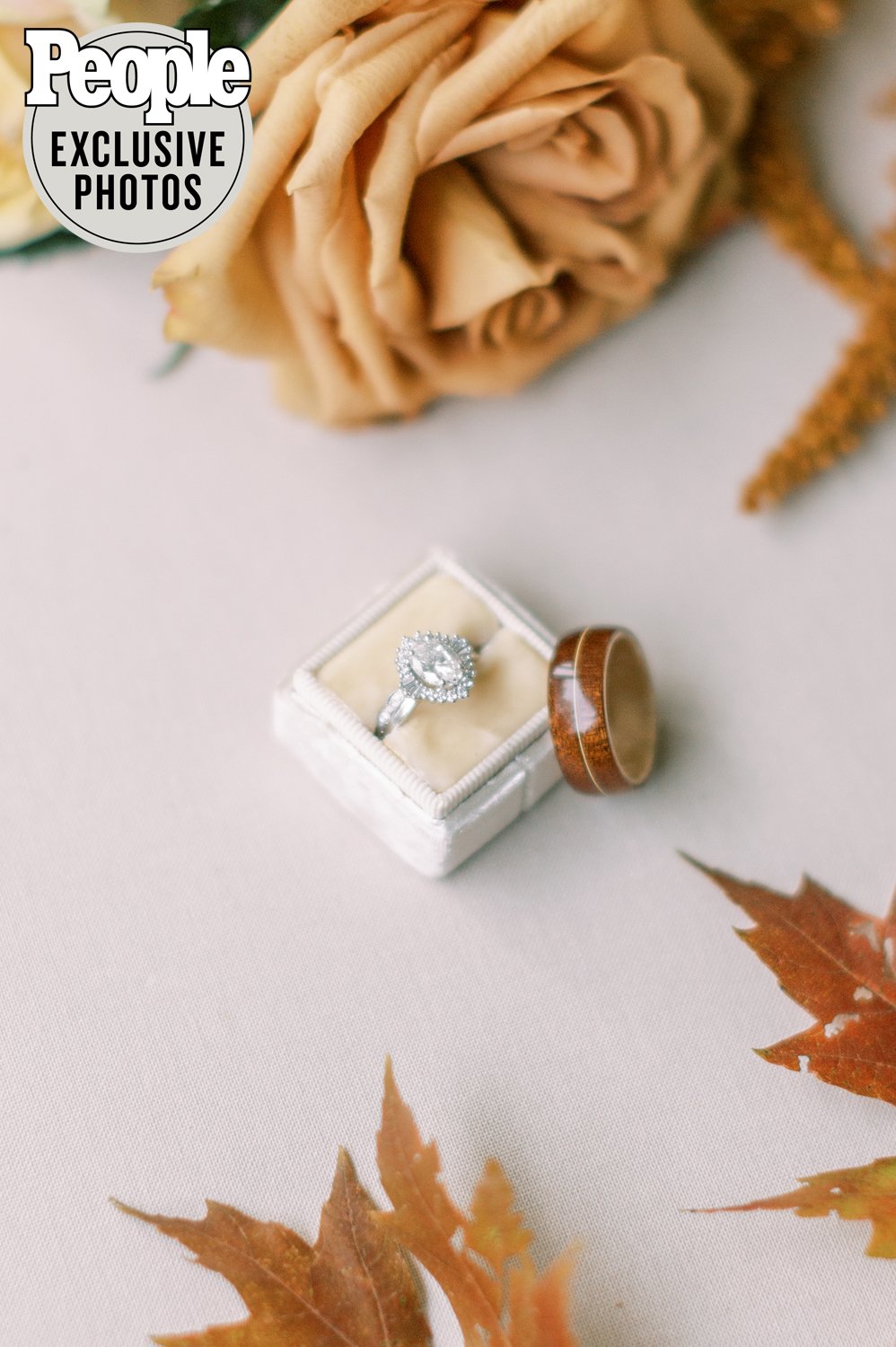 The couple then exchanged rings, with Roberts going with a vintage style stunner while Sasser chose a beautiful wooden wedding band with a guitar string inlay.

"He loved the wood, because he builds furniture and he said the guitar string reminds him of me," explains Roberts.

Come reception time, Roberts changed into a dress from BHLDN Weddings and designed by By Watters along with shoes from Bella Belle Shoes, heels which coincidentally contained notes from her bridesmaids on the bottoms. 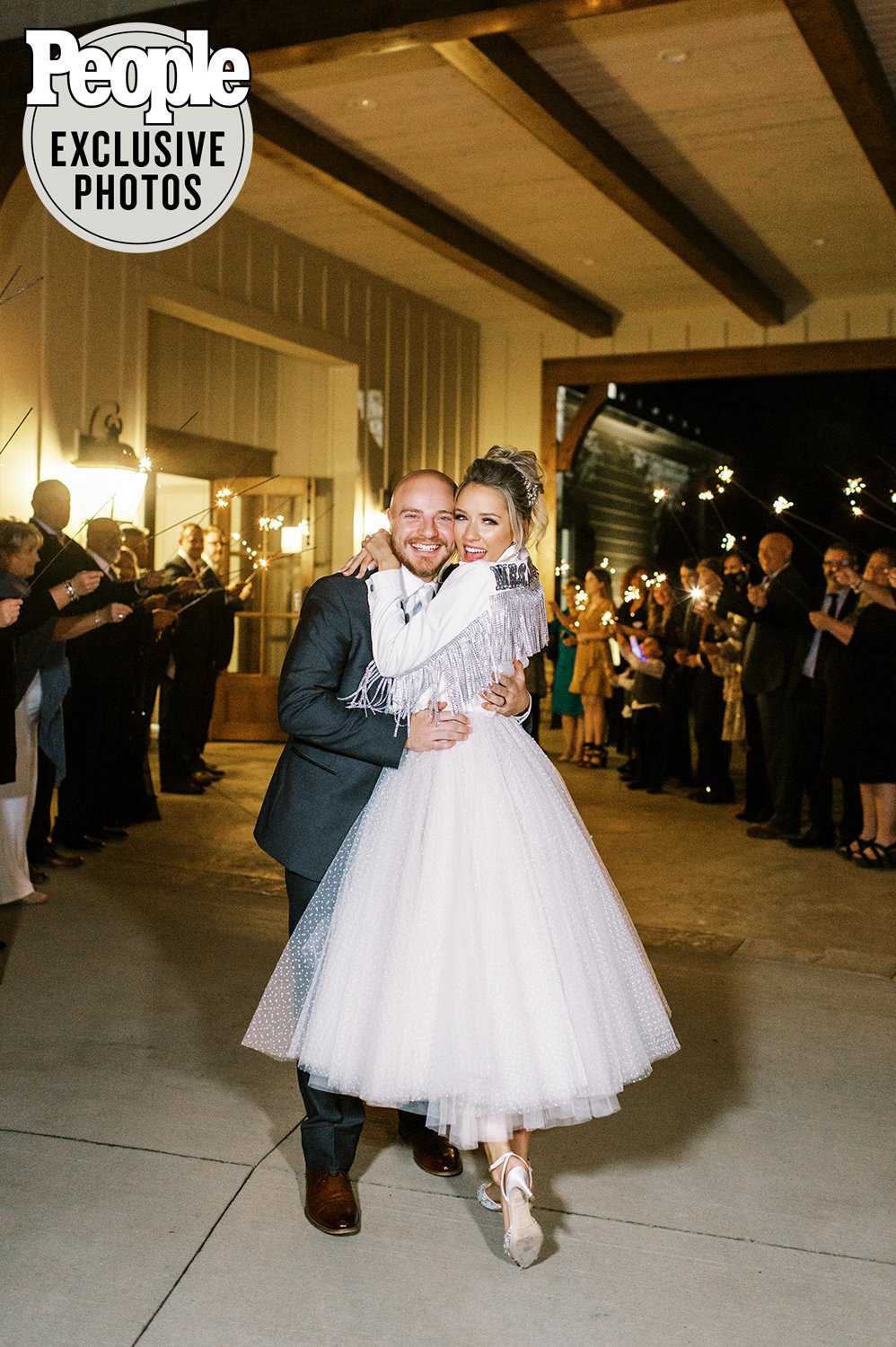 It was then time for the couple to come together on the dance floor for their first dance to the song "Take the World" by Johnnyswim.

"We drove out to the lake one night and sat in [Sasser's] truck listening to so many love song options for our first dance and this one touched our hearts from the beginning," Roberts remembers. "We got out of the truck and practiced our dance in the headlights. It's a moment we will never forget." 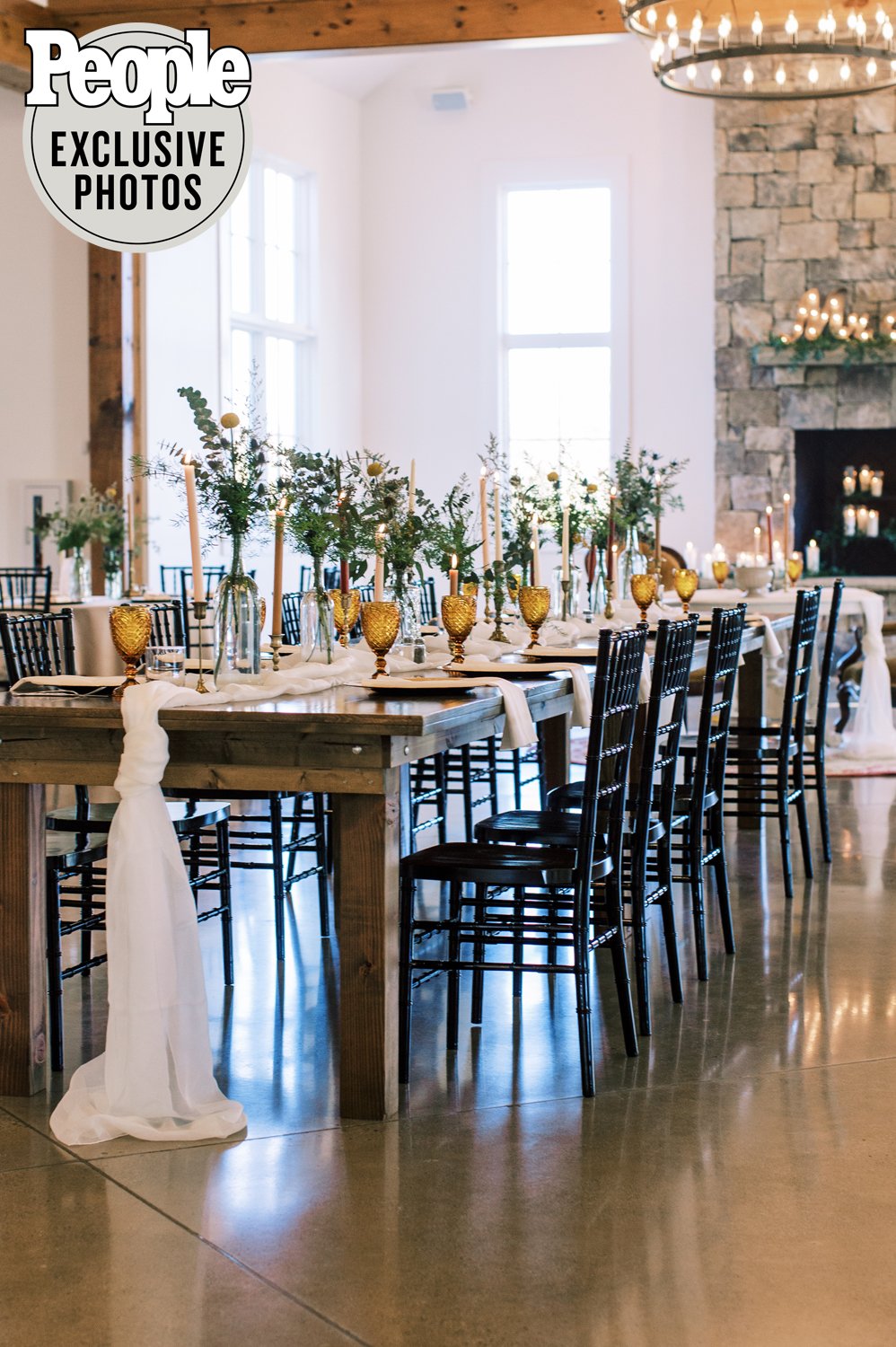 And much like any country wedding, there was plenty of good food at the reception, including scrumptious macaroni and cheese custom made for Roberts' 10 nieces and nephews. After dinner, guests enjoyed a full dessert bar created by Magpies Bakery, which included everything from s'mores, and red-velvet mini cupcakes as well as chocolate chip and oatmeal cream pie mini Sammie cookies. Each dessert was situated on a unique mix and match selection of china dessert plates on a beautiful buffet, all provided by Sisters Vintage Rentals.

"Doing the desserts was by far one of the most fun things to plan," laughs Roberts, who also chose to go with a traditional two-tiered vanilla wedding cake with a fall-inspired watercolor design created by Magpies Bakery. "It was everything I imagined it would be." 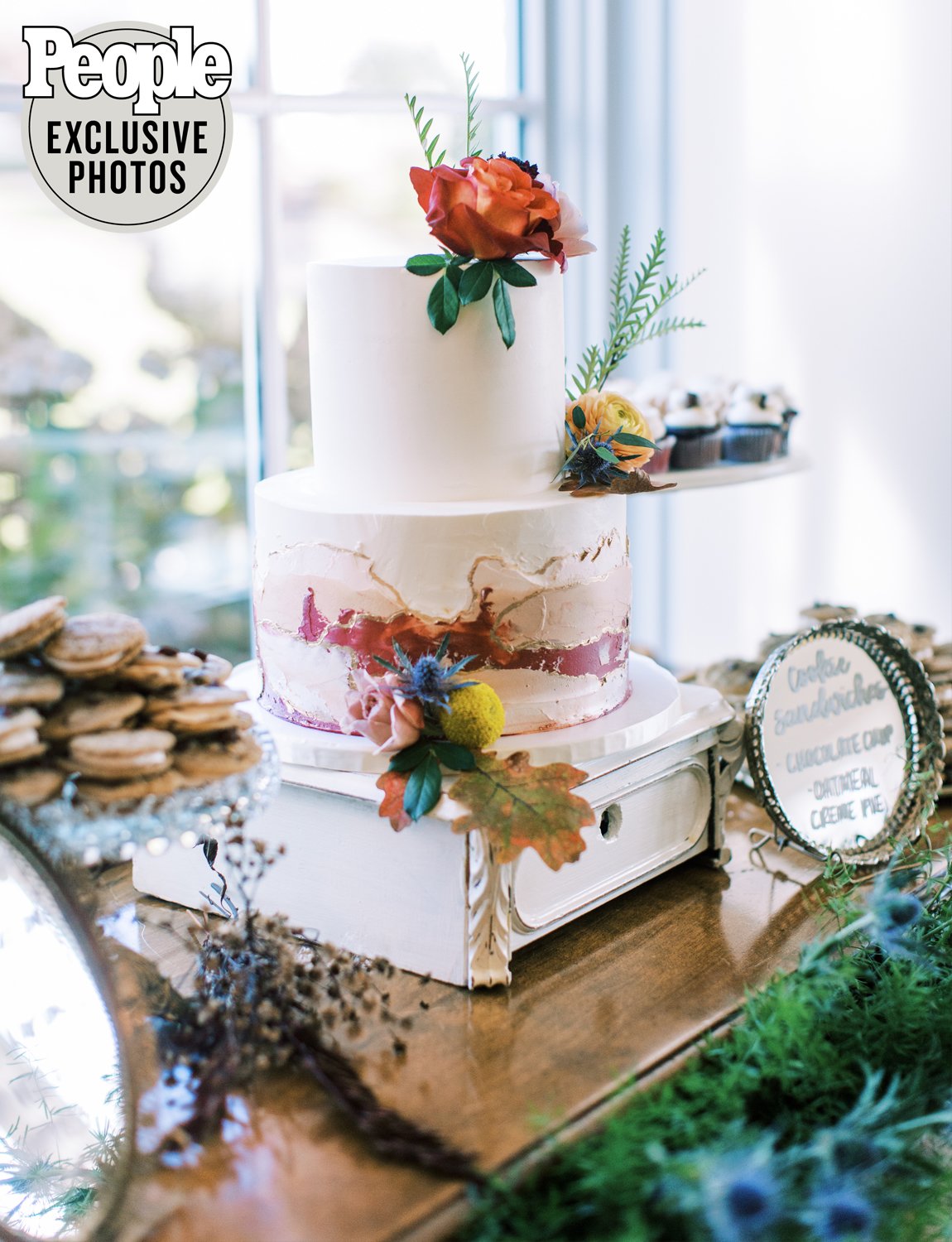 Granted, while the day turned out perfectly, Roberts admits that the ongoing pandemic did create quite a challenge within the entire wedding planning process.

"We decided two weeks before to get married outside, which was never the original plan, but we knew it would be the best decision for everyone's safety," says Roberts, who will soon embark with Sasser on a road trip to a 'quiet little beach town' in South Florida for their honeymoon.

"There were also many guidelines set in place by our venue we had to abide by, but we're so thankful to the team at Marblegate and every single vendor we worked with for helping us through the planning…and sometimes re-planning process." 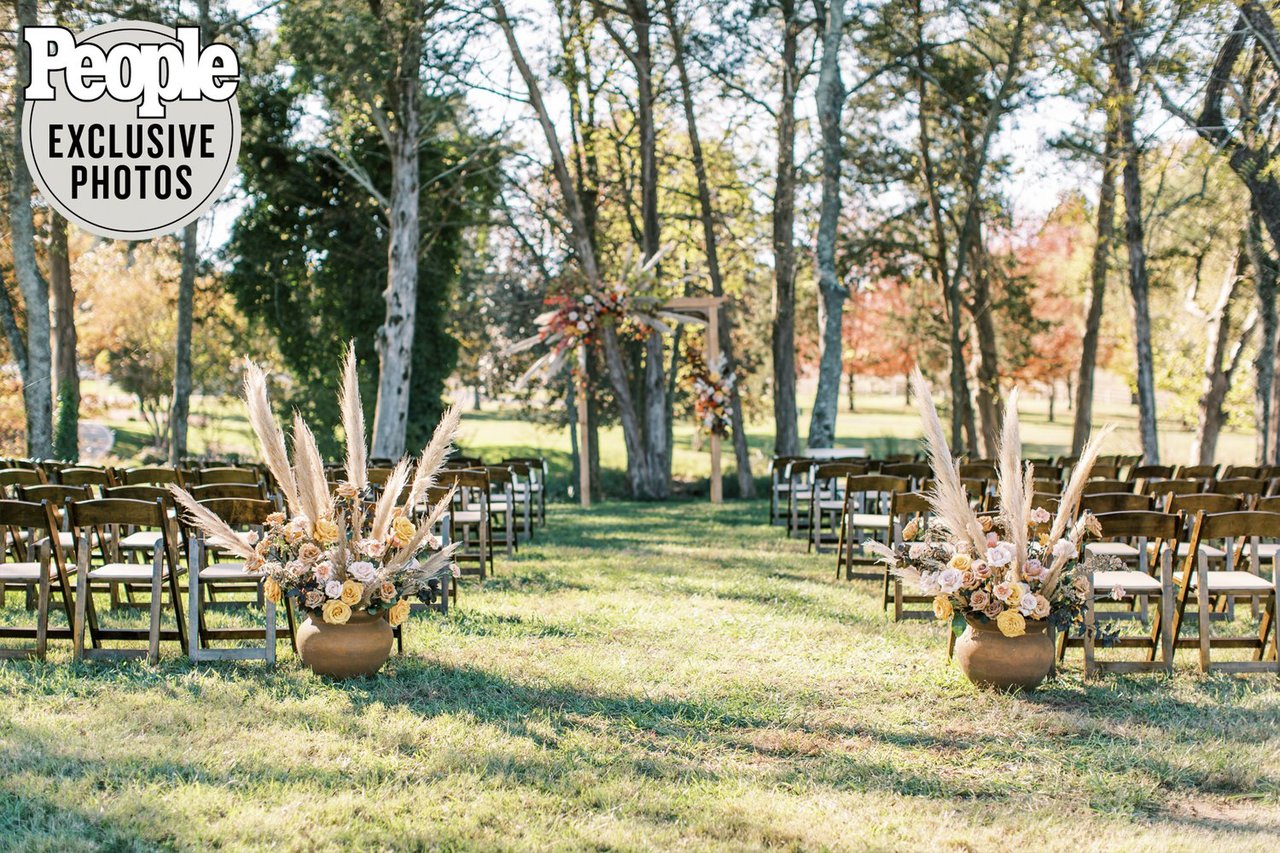 Indeed, Roberts admitted the topsy-turvy nature of the wedding planning process will undoubtedly help the couple down the road as husband and wife.

"A piece of advice we're taking into our marriage with us is to always talk things out," Roberts says. "We've both learned in every other relationship in our lives how important honesty and communication is. We know it is even more important to always be on the same page to make a marriage work."