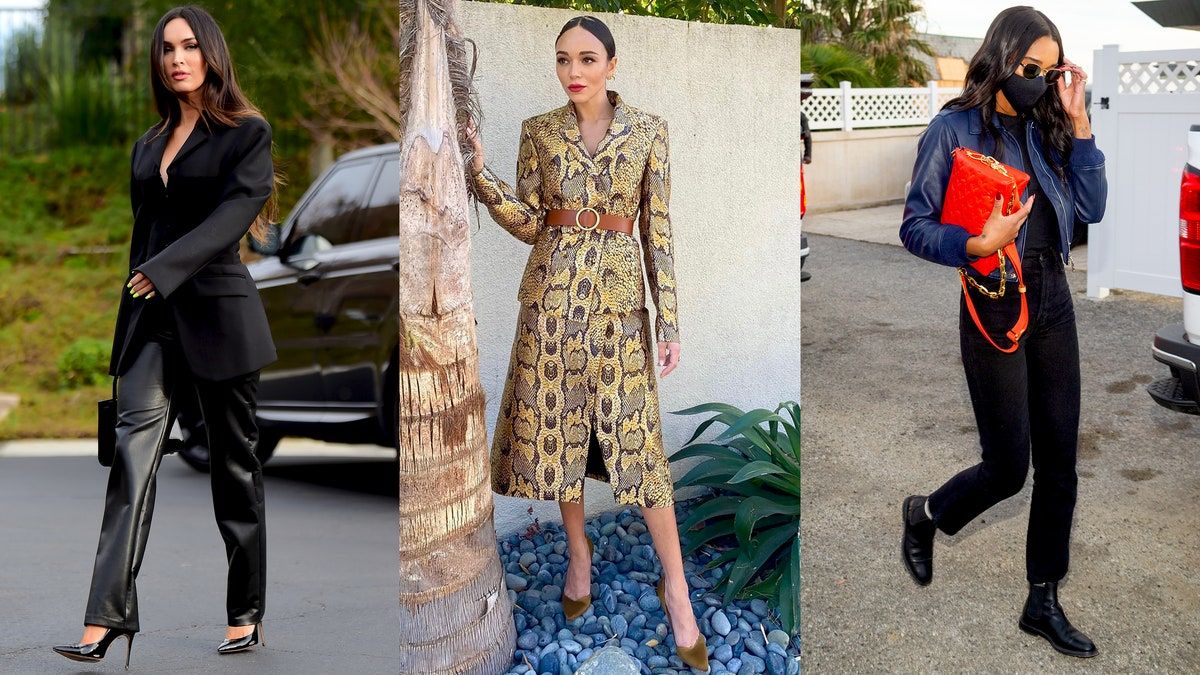 Thanks to social media and the 24-hour news cycle, a celebrity’s work is never done. Last week as they were busy plugging their new projects and heading to business meetings, stars put their best, most professional foot forward. As performers, their workwear doesn’t have to conform to an office (or Zoom) dress code. Instead, it represents their public personas and personal brands.

For Megan Fox, that meant a modern twist on the power suit. Aughts fans undoubtedly remember some of Fox’s sultrier red carpet moments, but in Dion Lee’s structured tube blazer and high-waisted, vegan leather pants from Aritzia, she found a look that reflected her new vibe. Accessorized with a Saint Laurent mini-bag and a barely visible gold chain, the minimalist outfit placed Fox in a new (and chic) fashion context.

As one of American Idol’s hosts, Katy Perry’s work uniform often verges into cosplay. Over the years, she has sat in the judge’s chair wearing everything from a hand-sanitizer costume to an Amelia Earhart-inspired flight suit. For this season’s premiere, though, Perry selected a look that was (slightly) more down to earth. In the final look from Viktor and Rolf’s Fall/Winter 2020 couture presentation, Perry elevated her kitschy repertoire without losing any fun. Crafted using fabric from local suppliers in Amsterdam and pieces of vintage stock from designers Viktor Horsting and Rolf Snoeren’s previous collections, the belted coat was a prime example of haute couture’s current focus on sustainability. Covered in scads of glittery pink, white, and red hearts, it was a meme-worthy creation that suited Perry to a tee.

While the week’s tabloid headlines obsessed over Kim Kardashian’s relationship status, the reality star turned entrepreneur kept her social media professional. In between updates about the latest SKIMS drop, Kardashian updated with a picture of herself looking serene at home in Jacquemus’s Spring/Summer 2021 crop top. A daring take on the button-down with a built-in underwire, the look was a power move that asserted Kardashian’s modern-CEO style and ability to control the narrative. 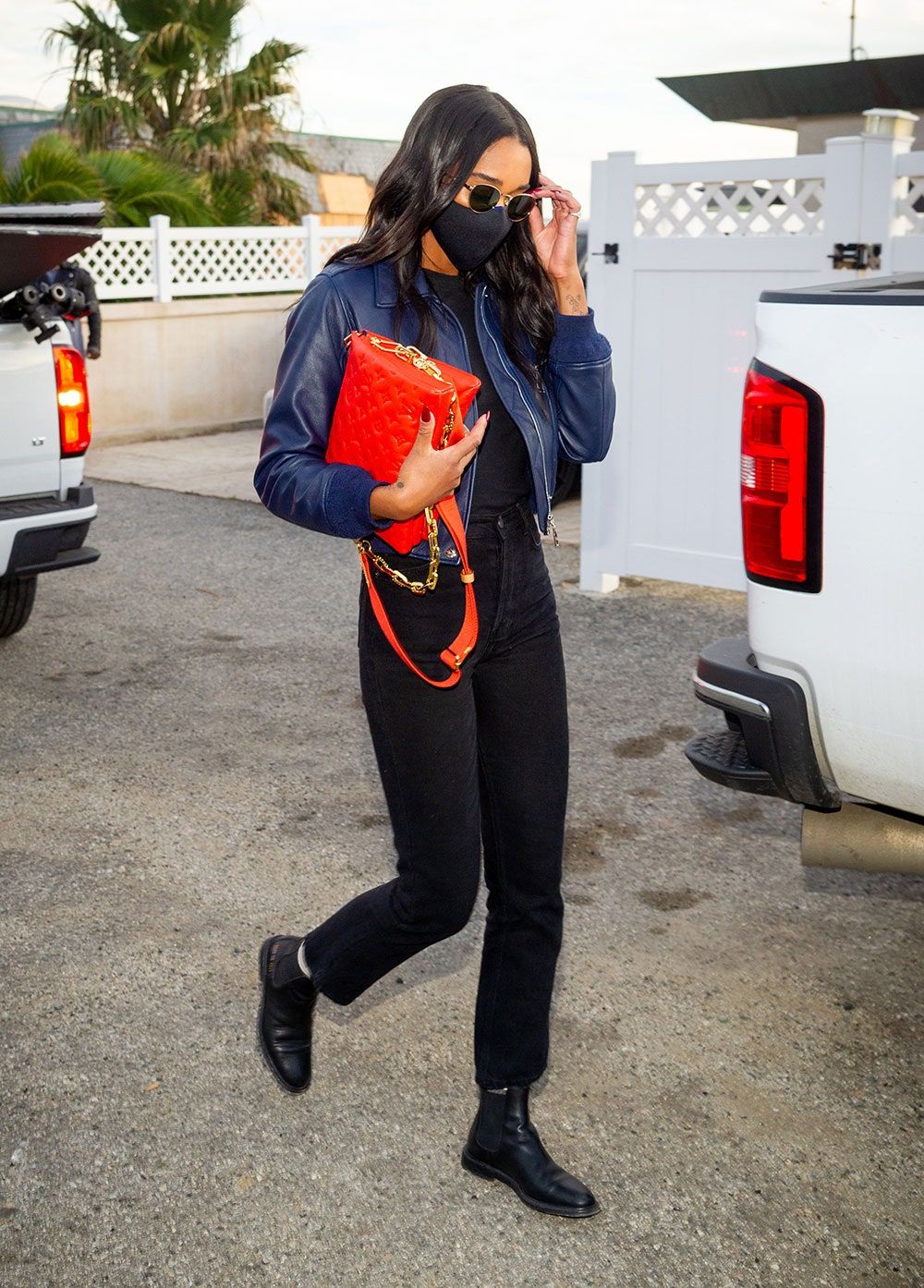 WHO: Laura Harrier
WHAT: Louis Vuitton Coussin Bag
WHERE: Los Angeles
WHEN: February 15 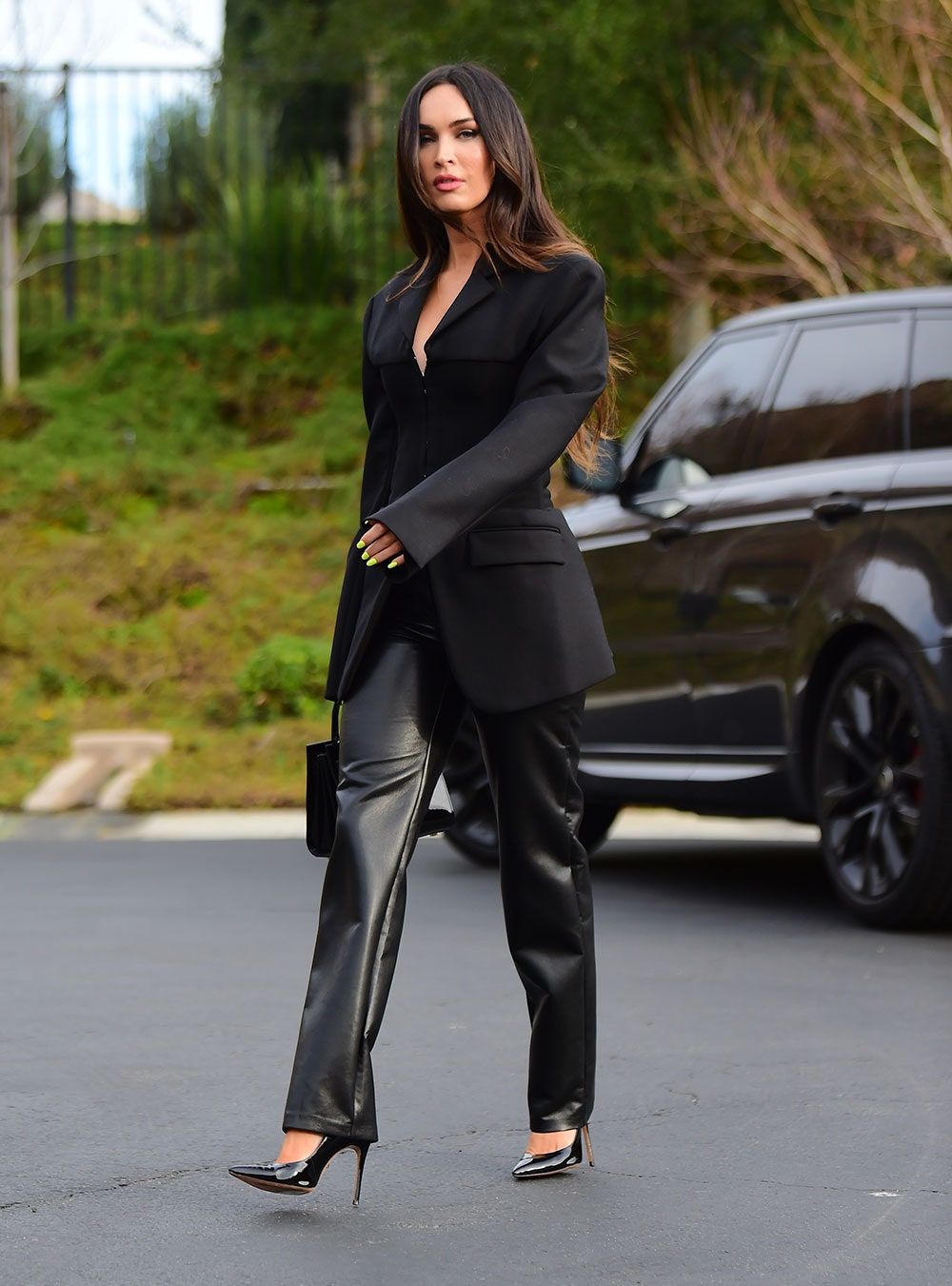 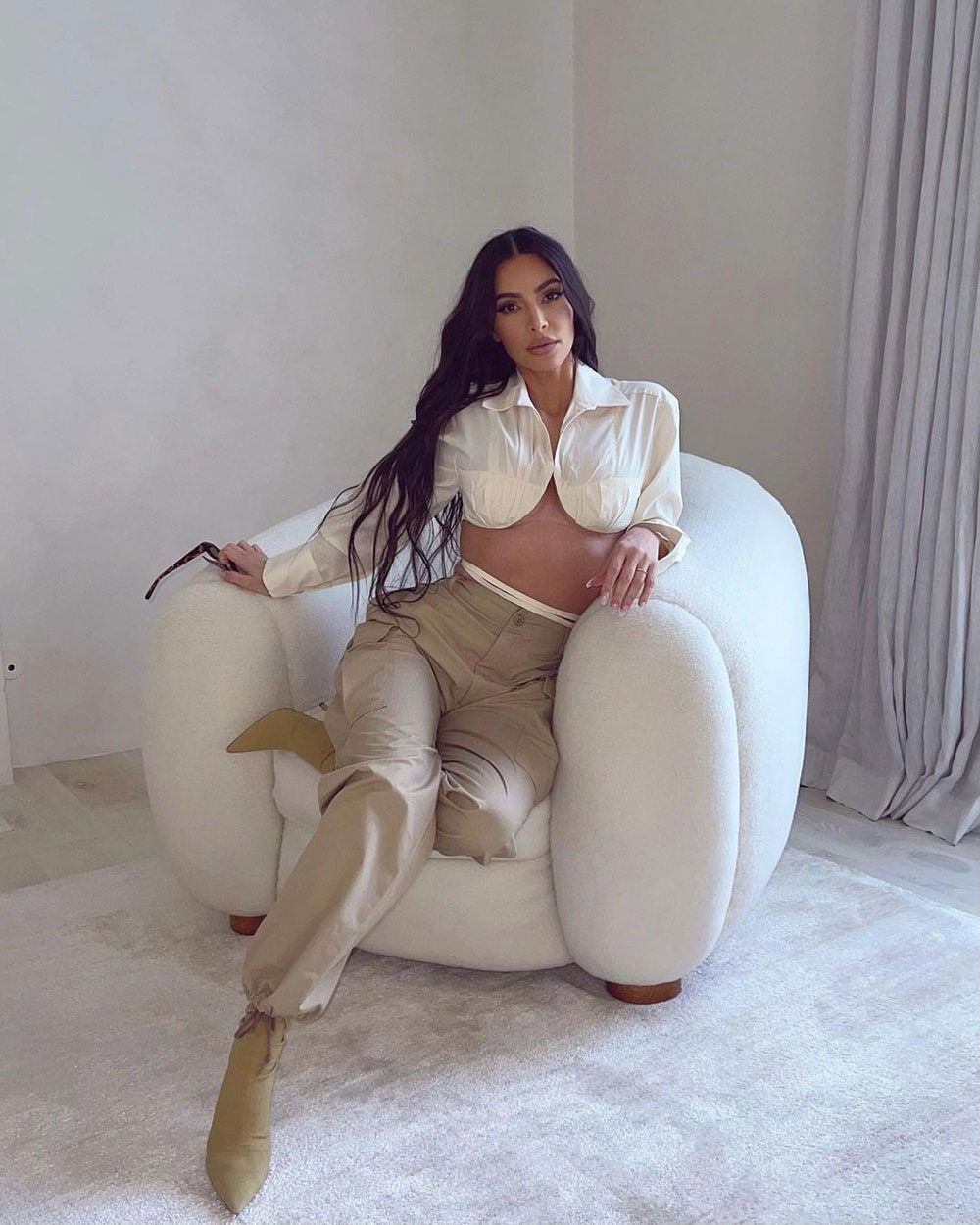 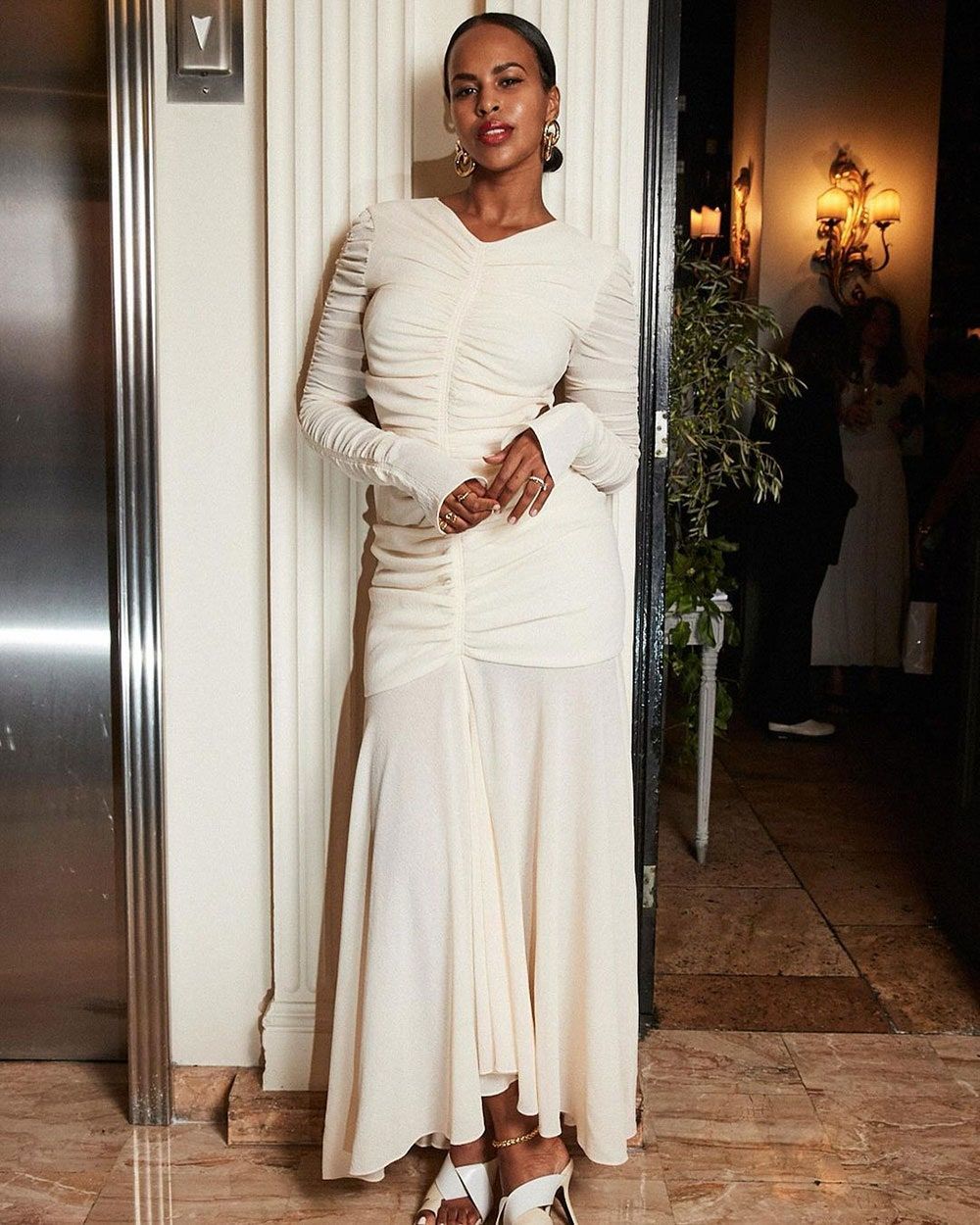 WHO: Sabrina Elba
WHAT: Camilla and Marc
WHERE: Nostalgia Collection Dinner
WHEN: February 20 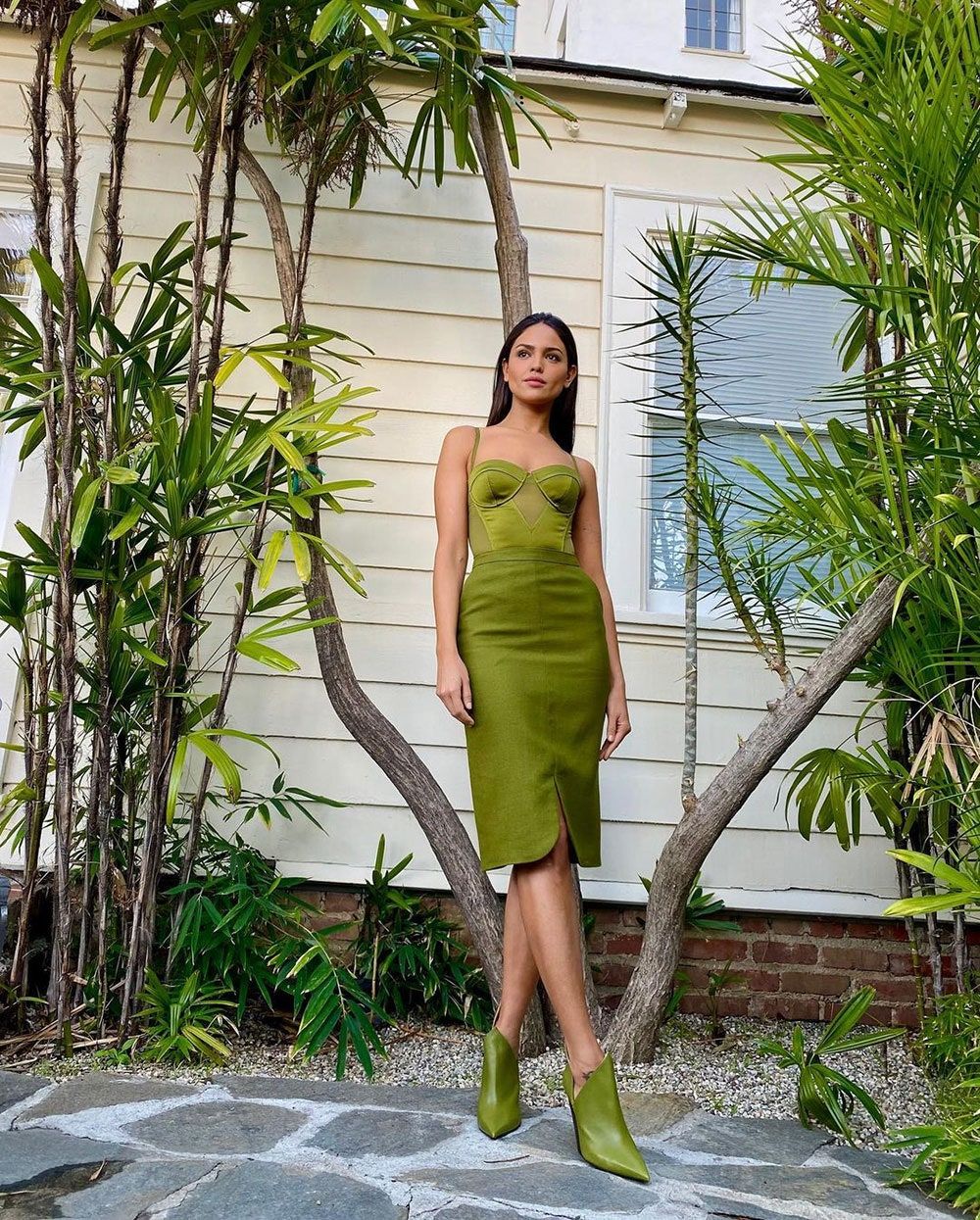 WHO: Eiza Gonzalez
WHAT: Burberry
WHERE: Jimmy Kimmel Live
WHEN: February 16 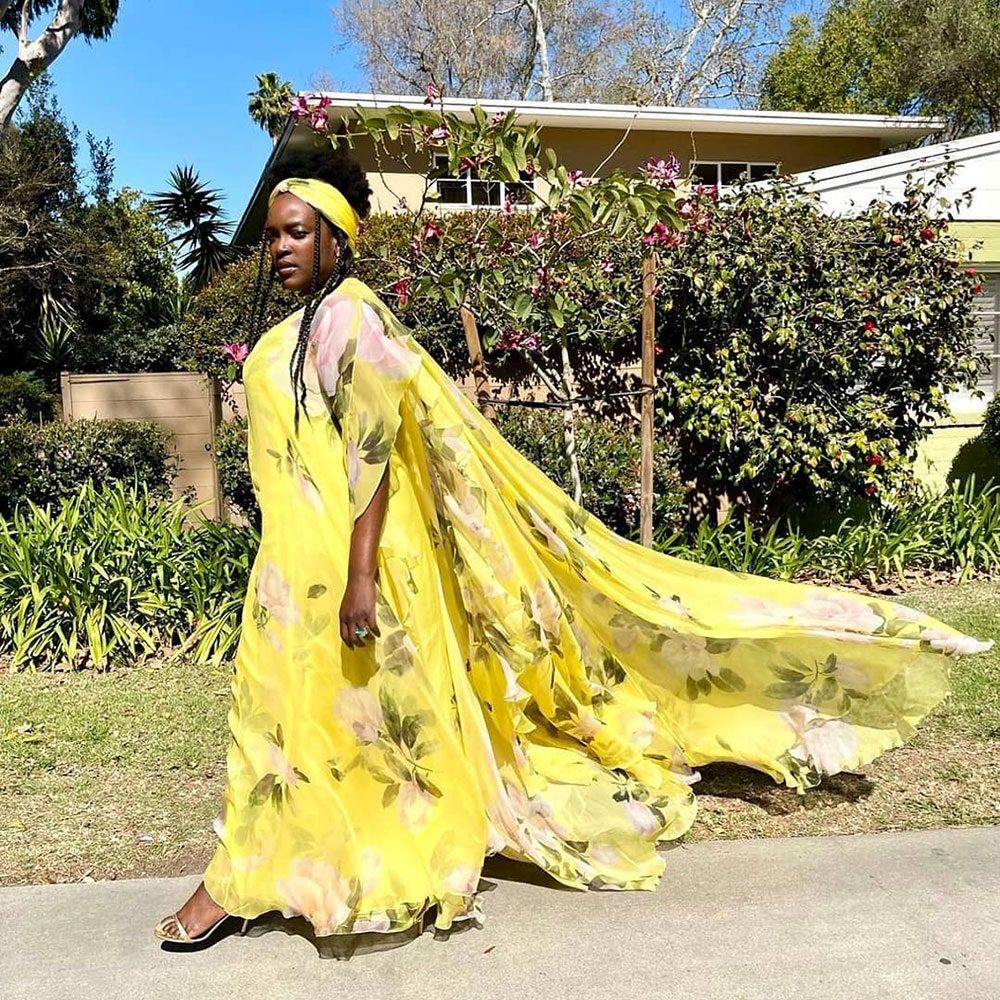 WHO: Wunmi Mosaku
WHAT: Valentino
WHERE: The British Independent Film Awards
WHEN: February 18 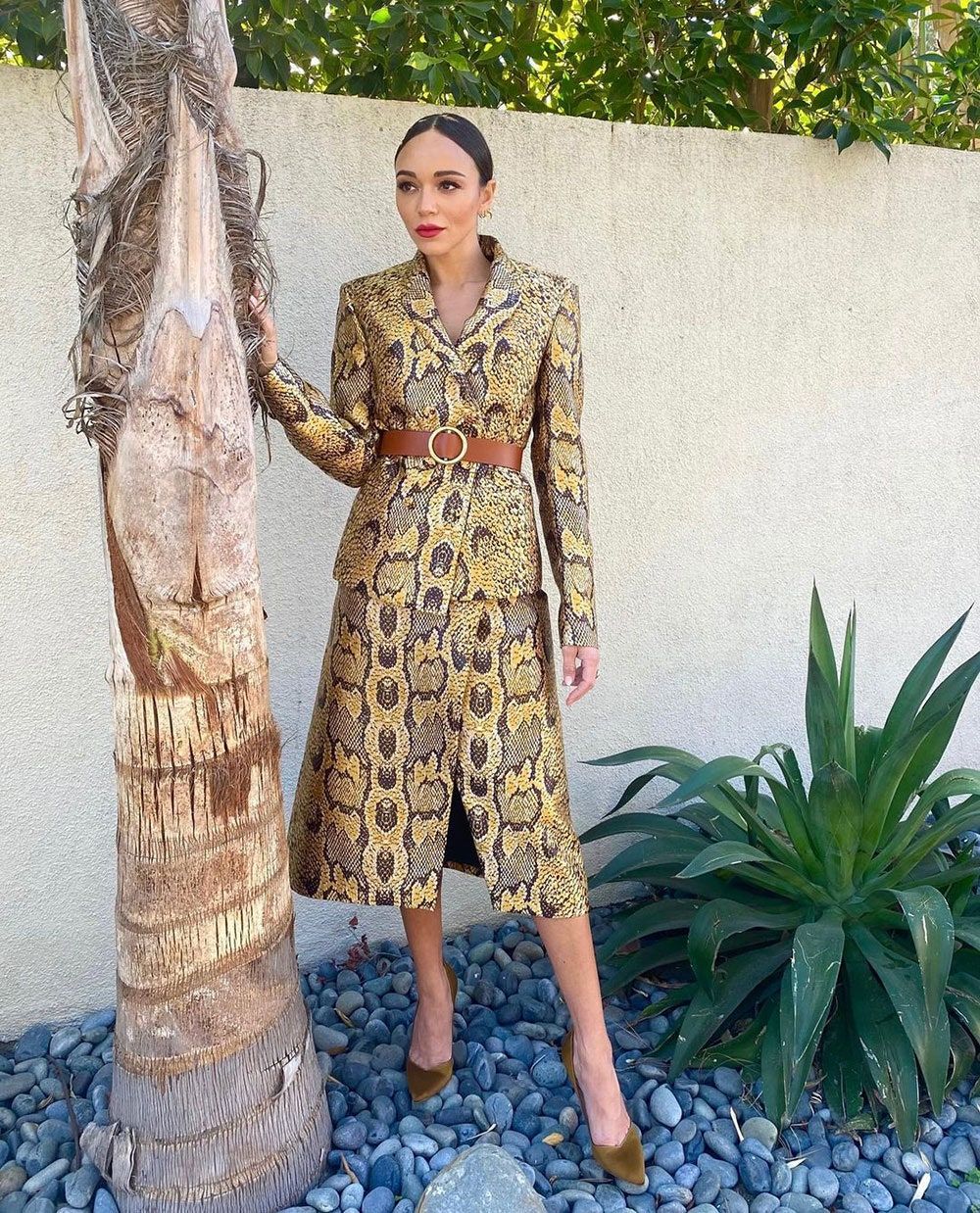 WHO: Ashley Madekwe
WHAT: Christopher Kane
WHERE: Country Lines Press Day
WHEN: February 19 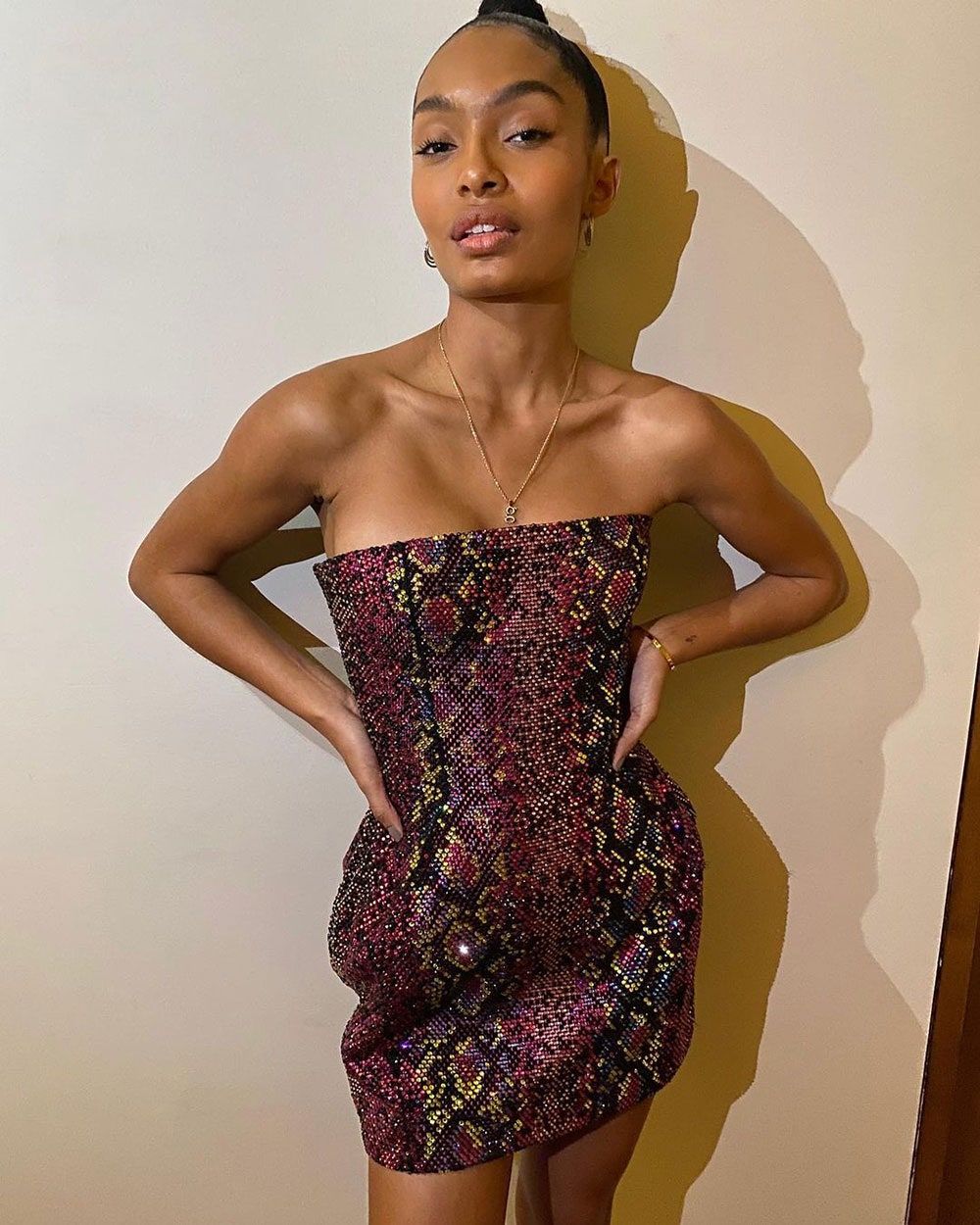 WHO: Yara Shahidi
WHAT: Versace
WHERE: Instagram
WHEN: February 19 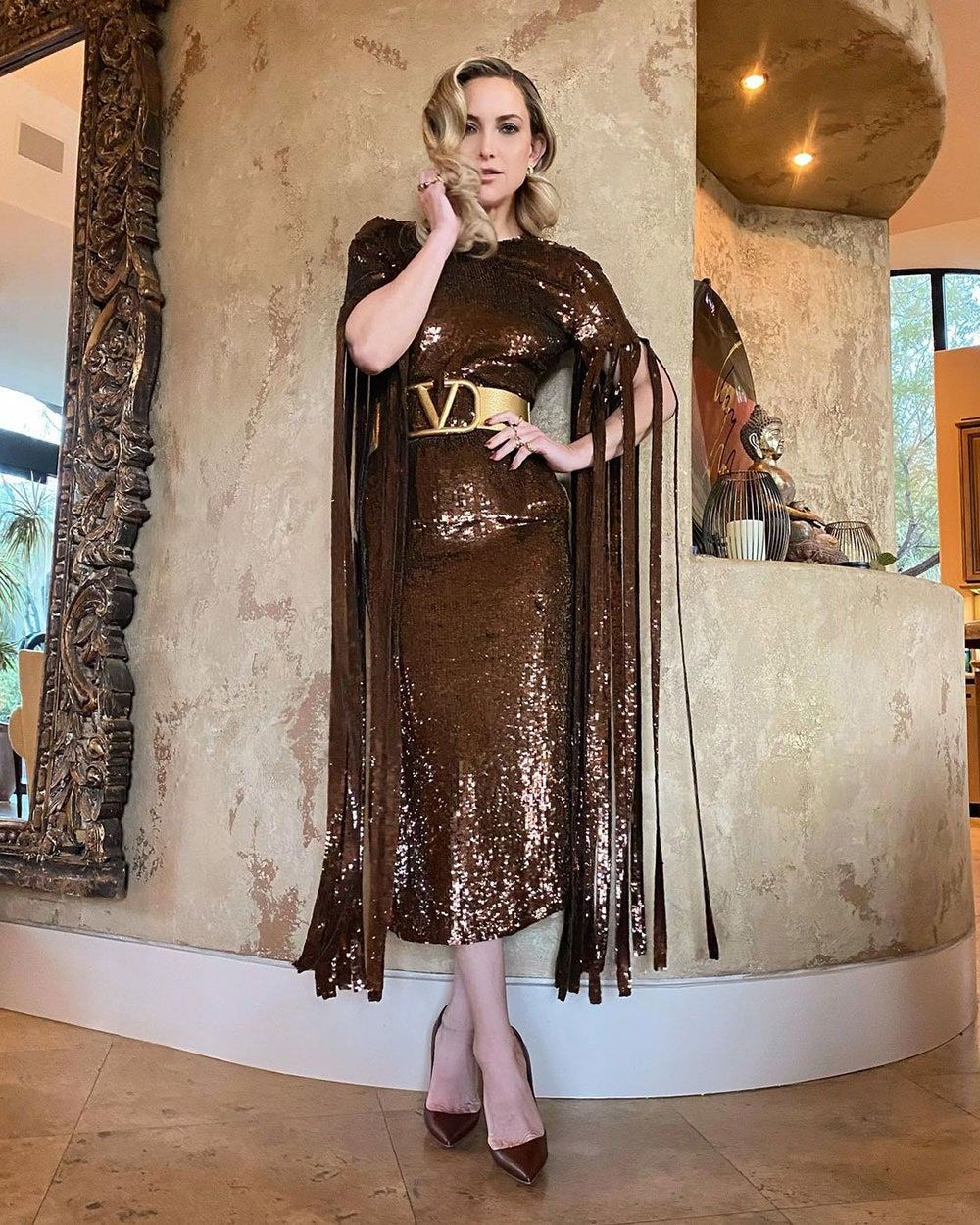 WHO: Kate Hudson
WHAT: Valentino
WHERE: Instagram
WHEN: February 20 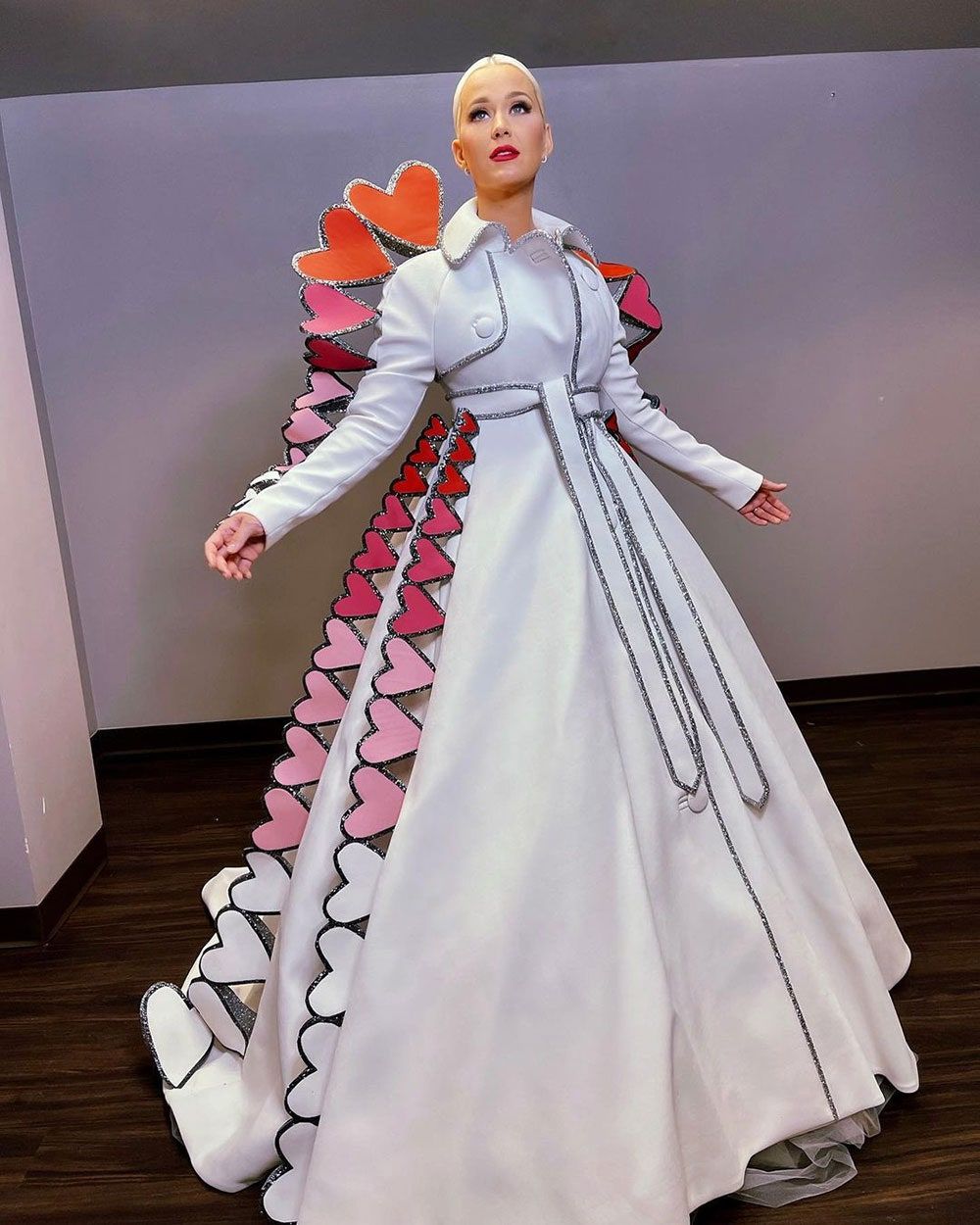 WHO: Katy Perry
WHAT: Viktor and Rolf Haute Couture
WHERE: American Idol
WHEN: February 12