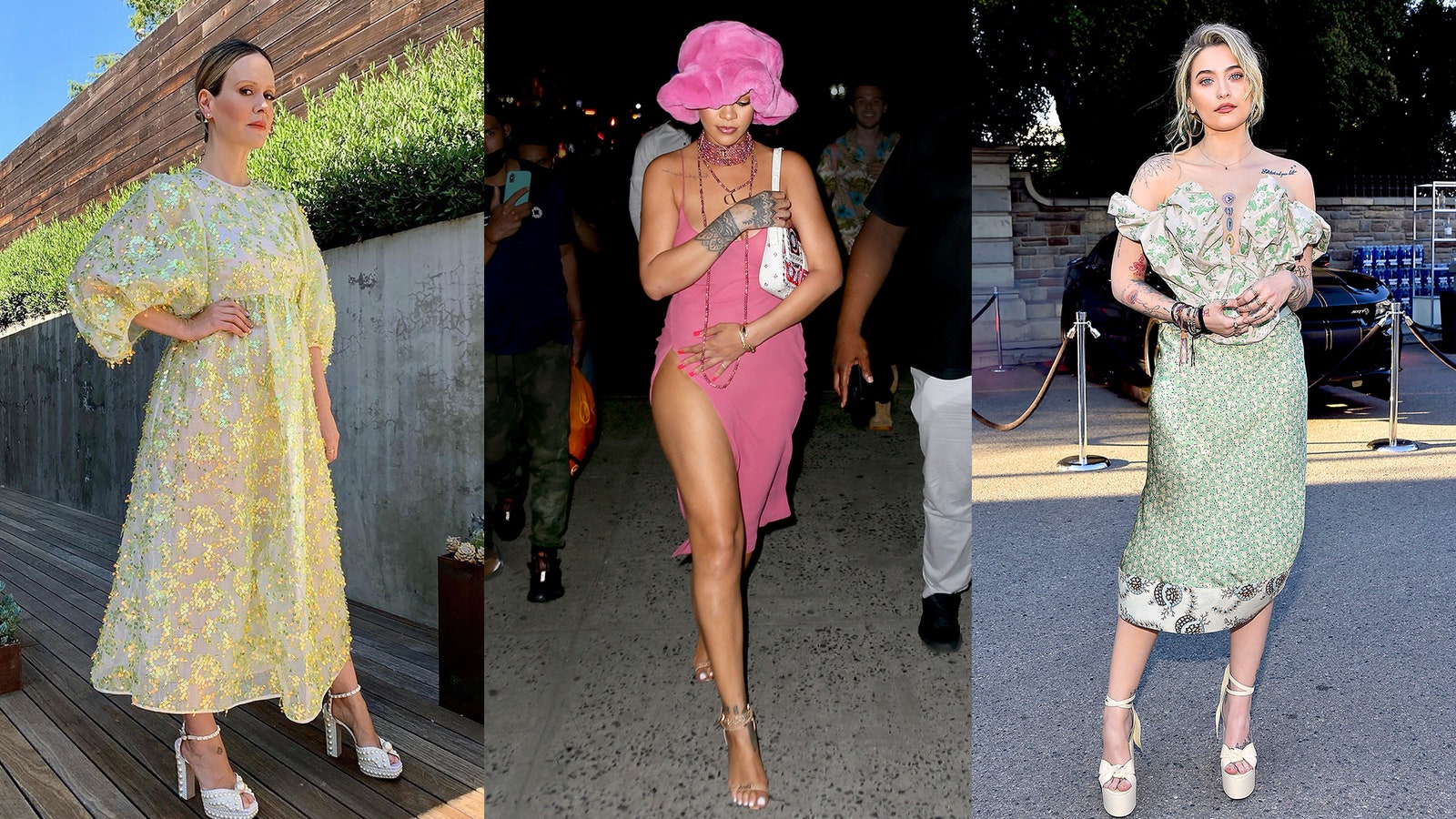 Celebrities brought out fuzzy hats, fluffy dresses, and other fashions that beg to be touched.

Fashion prioritizes the visual, but the way an outfit feels is as important as how it looks. Recently, celebrities have sought out runway pieces that beg to be touched. Whether stars were headed to nightclubs, charity events, or meetings with Europe’s political leaders, they relied on unique fabrications. The bolder the material, the better it looked. At a screening to honor Charlize Theron's CTAOP charity, Paris Jackson went full-glam in Vivienne Westwood's corseted midi-dress. Crafted from recycled polyester fibers that mimicked satin, Jackson's pattern-heavy look was an environmentally conscious win.

The highlight of Justin and Hailey Bieber’s Parisian getaway was the couple’s meeting with French President Emmanuel Macron and his wife, Brigitte. The Biebers relied heavily on casualwear during their trip, but they dressed up for their one-on-one with the Macrons. The LaQuan Smith halter dress Hailey chose for the occasion would have been striking in any material, but the softness of its boiled wool made for striking contrasts. The piece’s form-fitting silhouette and keyhole cutouts were overly sexy. Still, the fuzzy fabric toned things down, allowing the modeling star to appear stately even as she bared her midriff.

Rihanna’s long standing love affair with furry bucket hats has seen her wear multiple incarnations of the look. The musician-turned-mogul has enjoyed neon, zebra print, and check-covered versions in the past, but her date night with ASAP Rocky called for something special. As the pair hit up New York City hotspots like Barcade, Rihanna paired vintage John Galliano for Christian Dior pieces with milliner Emma Brewin’s puffy faux fur hat. Dressed in a magenta silk slip dress from the house’s spring/summer 2003 ready-to-wear collection, one of the iconic Massai collier de Chien chokers from Galliano’s Dior debut and a pair of gold python sandals from Tom Ford, Rihanna went full fashion nerd. The mix of metallic snakeskin, silk, crystals, and fur would feel overwrought in another outfit, but Rihanna pulled it off with swagger.

Rihanna and Hailey made a statement in soft textures, but sparkling embellishment was equally effective. When Sarah Paulson headed to Jimmy Kimmel Live to talk American Crime Story, she did so in the electric green and yellow ‘Karmen’ dress from Cecilie Bahnsen’s spring/summer 2021 lookbook. If thousands of sequins weren’t dramatic enough, Paulson doubled down on shine by adding Jimmy Choo’s pearl-laden sandals. The resulting look was striking and immediately garnered a compliment from Kimmel. Normally a fan of sleek fashions, Paulson credited reemergence for the foray into ethereal style. “I haven’t been out of the house in a while; I thought I’d put everything I own on. Why not,” she said. “Pearls and sequins, it feels good to me.” We couldn’t agree more. 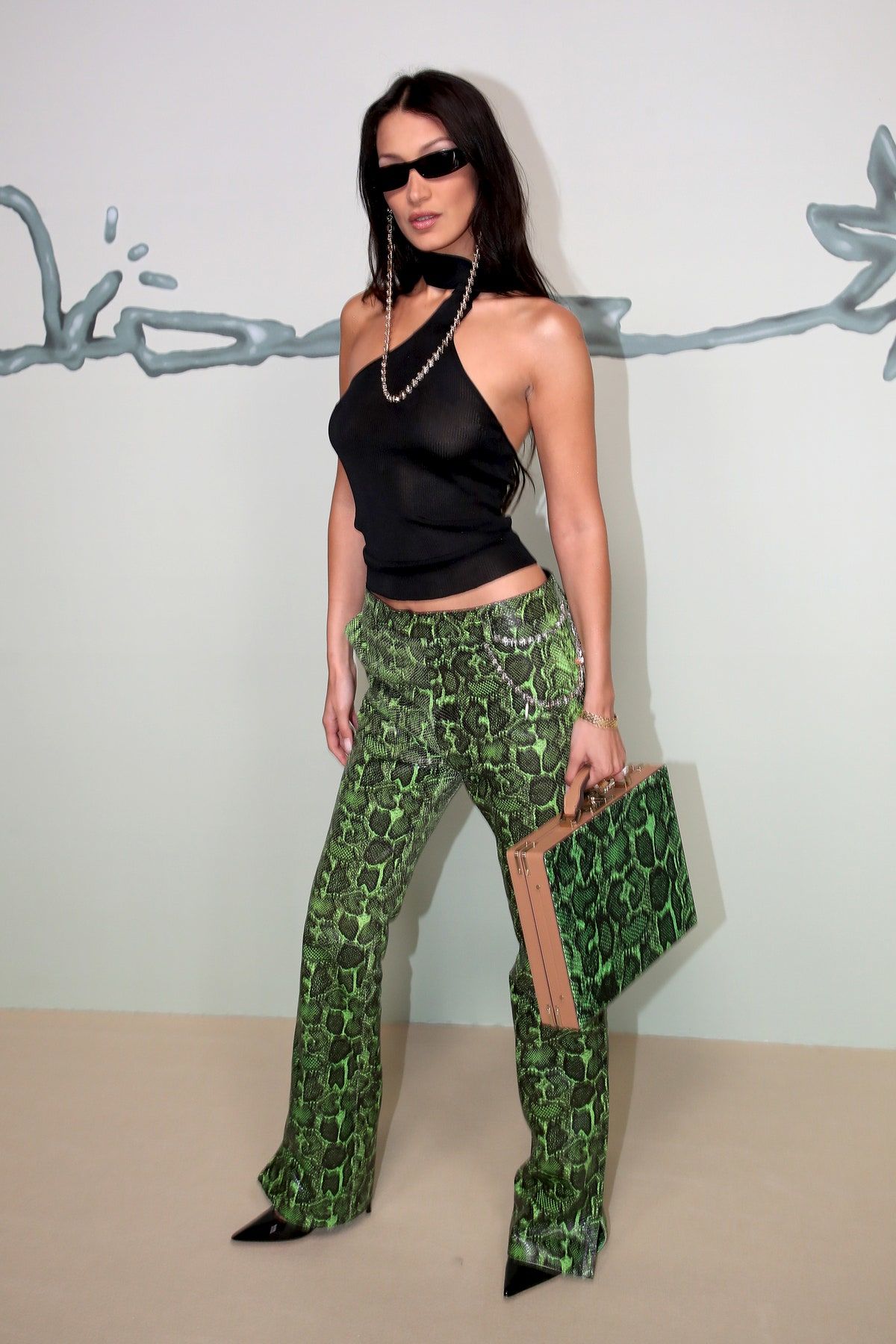 WHO: Bella Hadid
WHAT: Dior
WHERE: Dior Men’s Show
WHEN: June 25 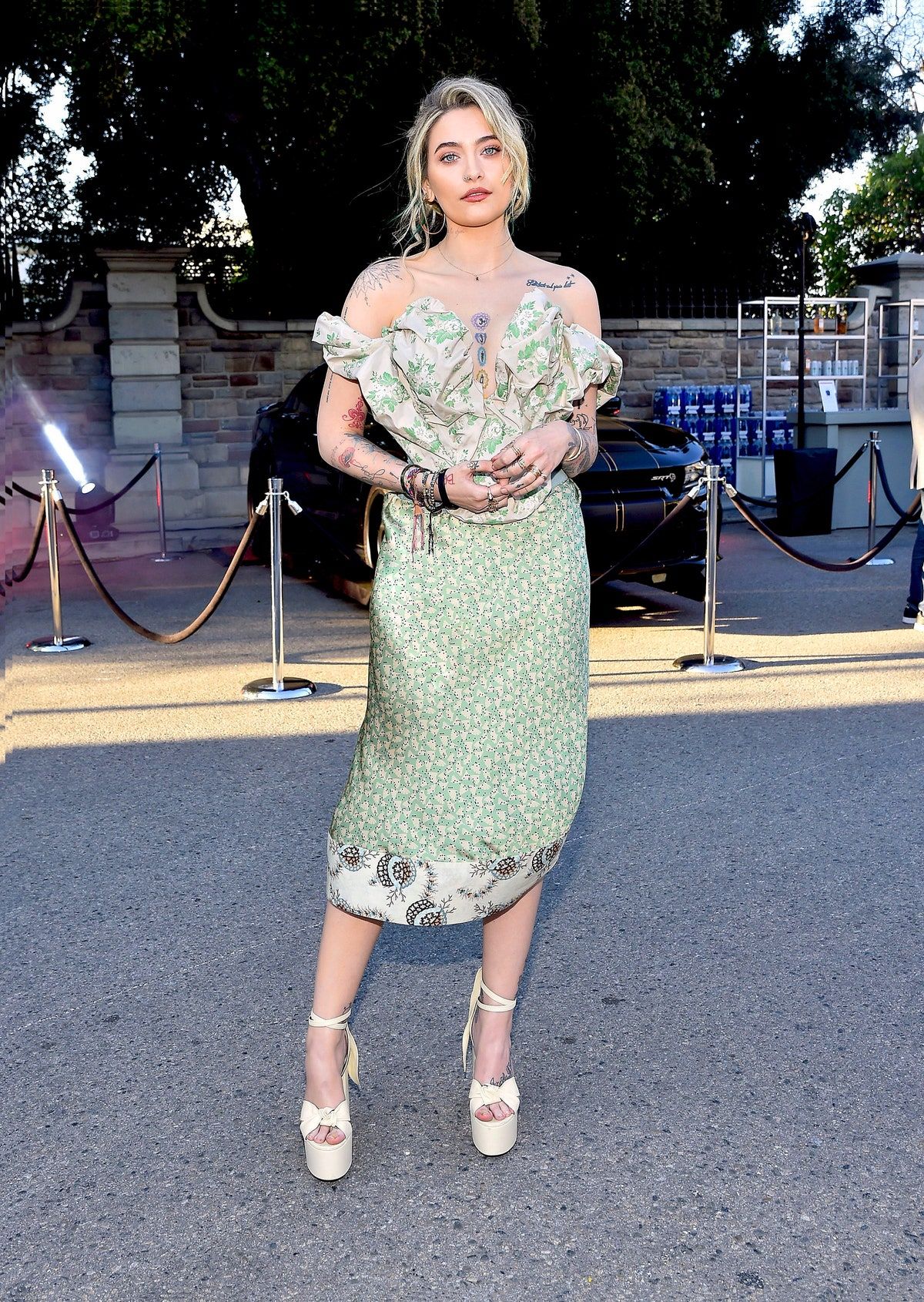 WHO: Paris Jackson
WHAT: Vivienne Westwood
WHERE: CTAOP's Night Out 2021
WHEN: June 26 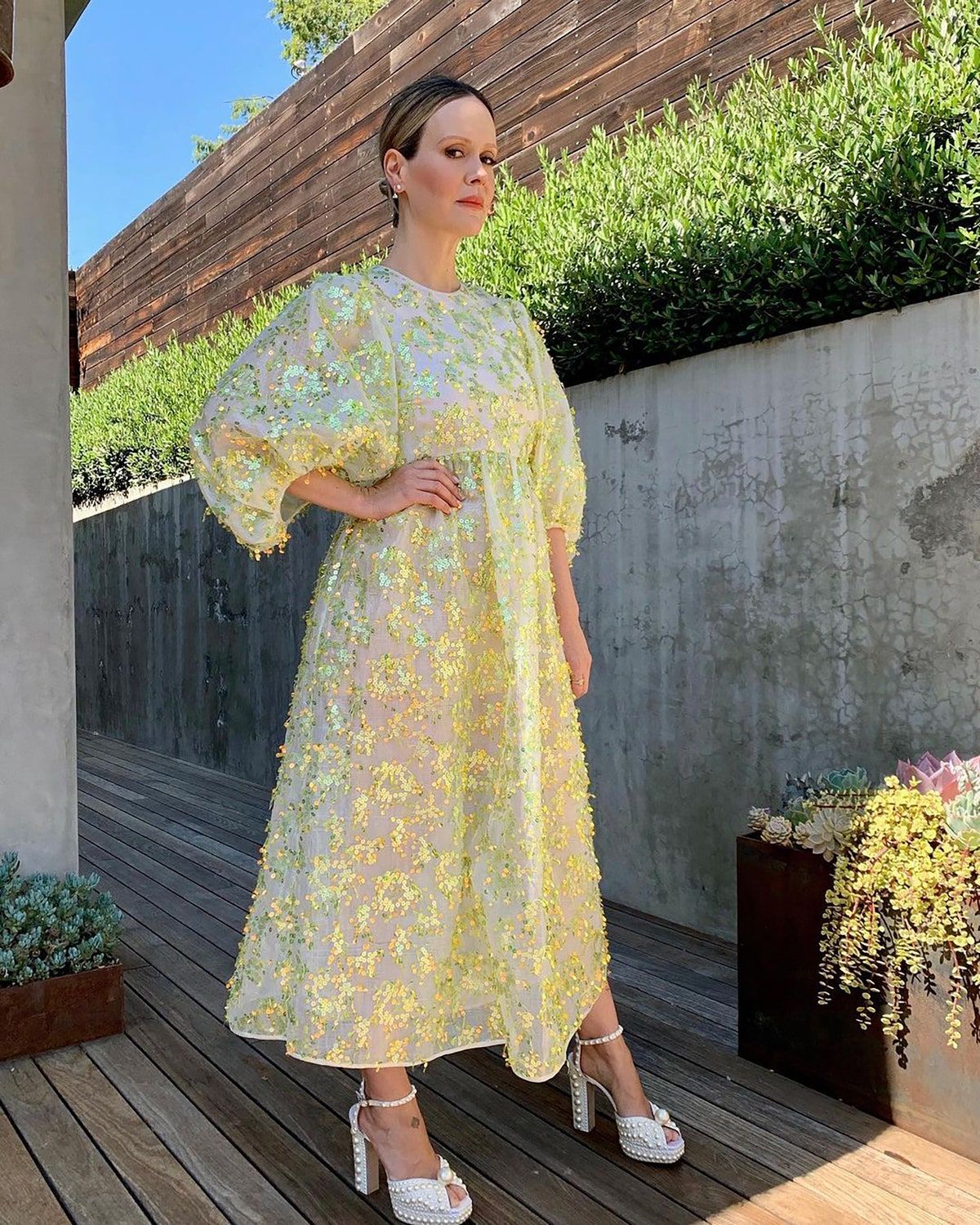 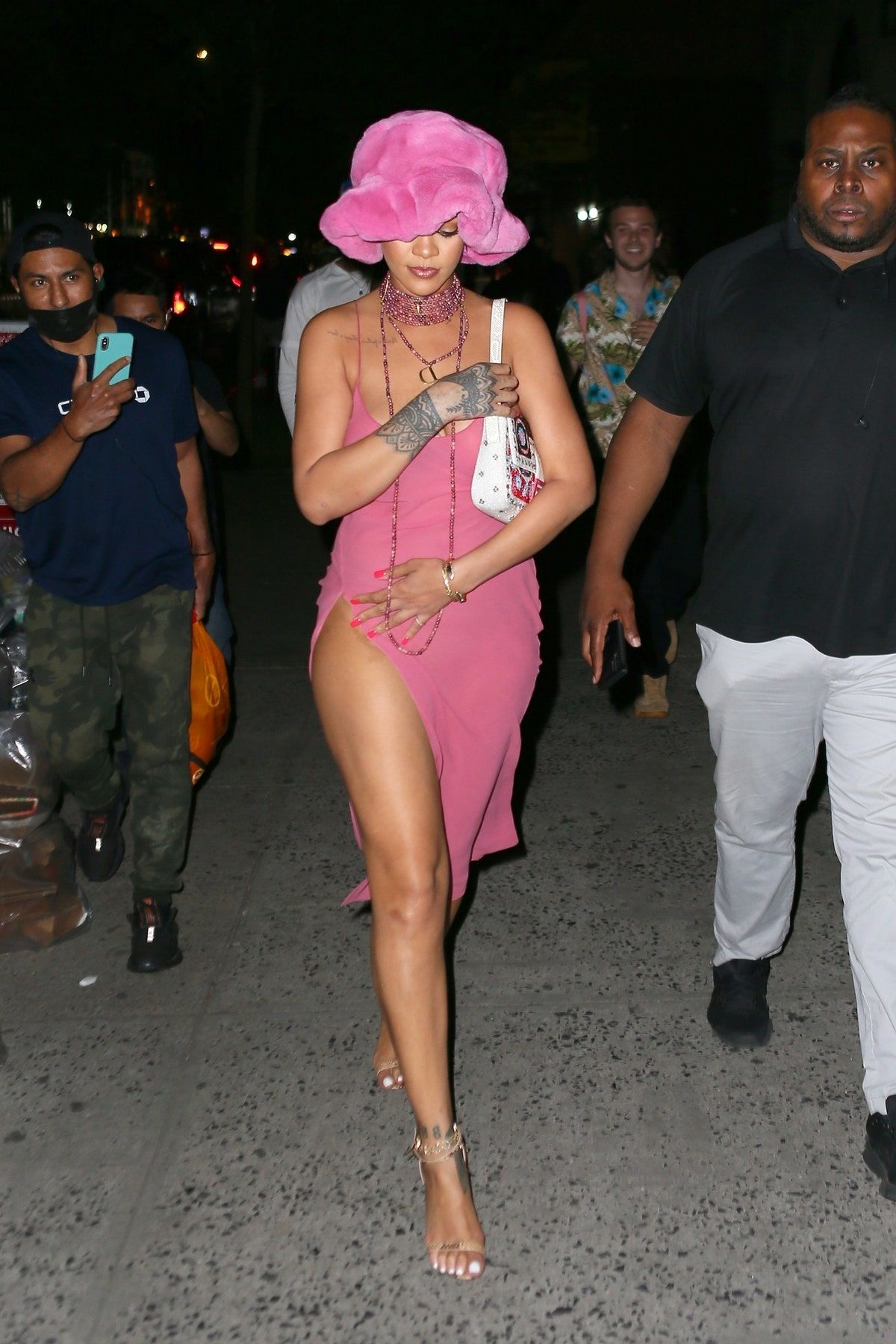 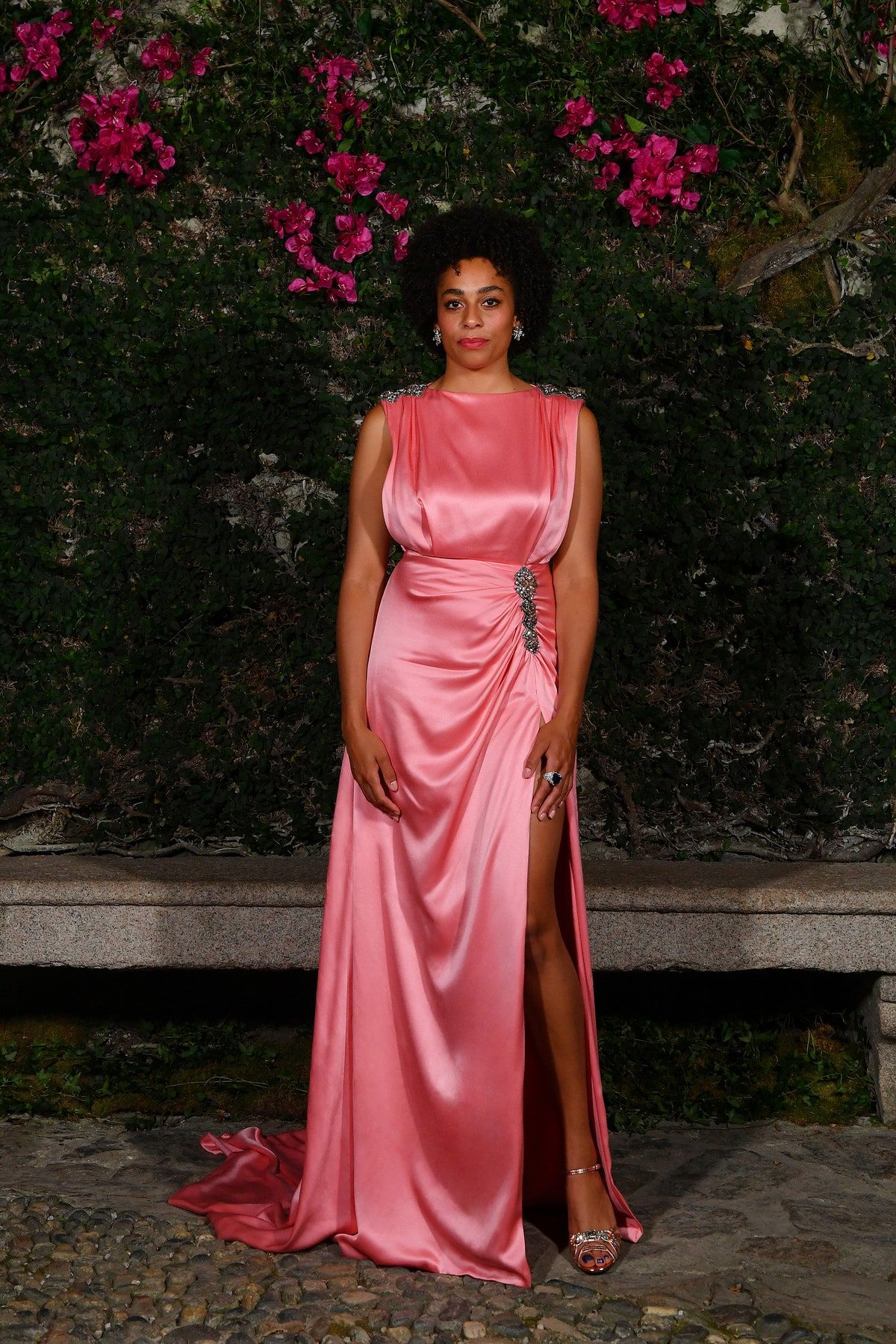 WHO: Celeste
WHAT: Gucci
WHERE: Gucci High Jewelry Presentation
WHEN: June 25 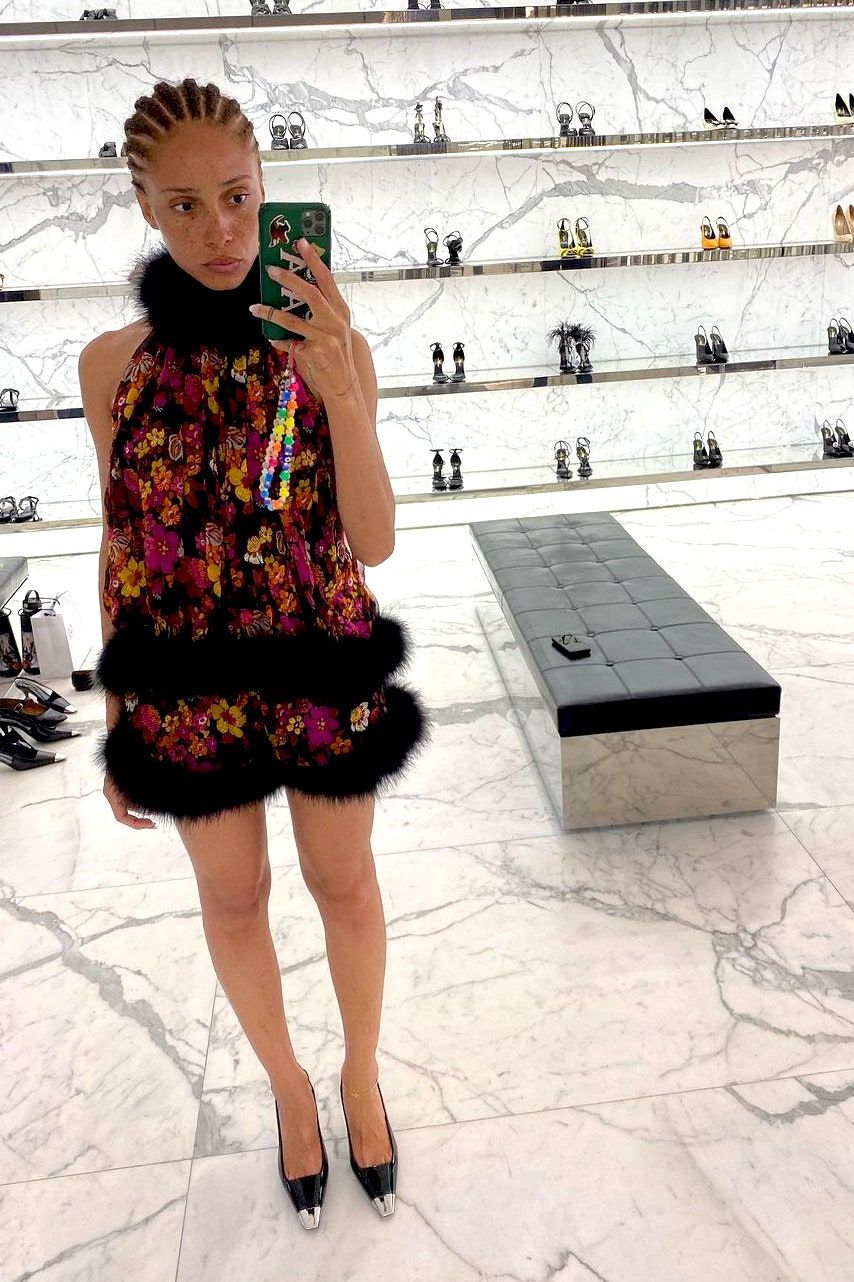 WHO: Adwoa Aboah
WHAT: Saint Laurent
WHERE: Instagram
WHEN: June 25 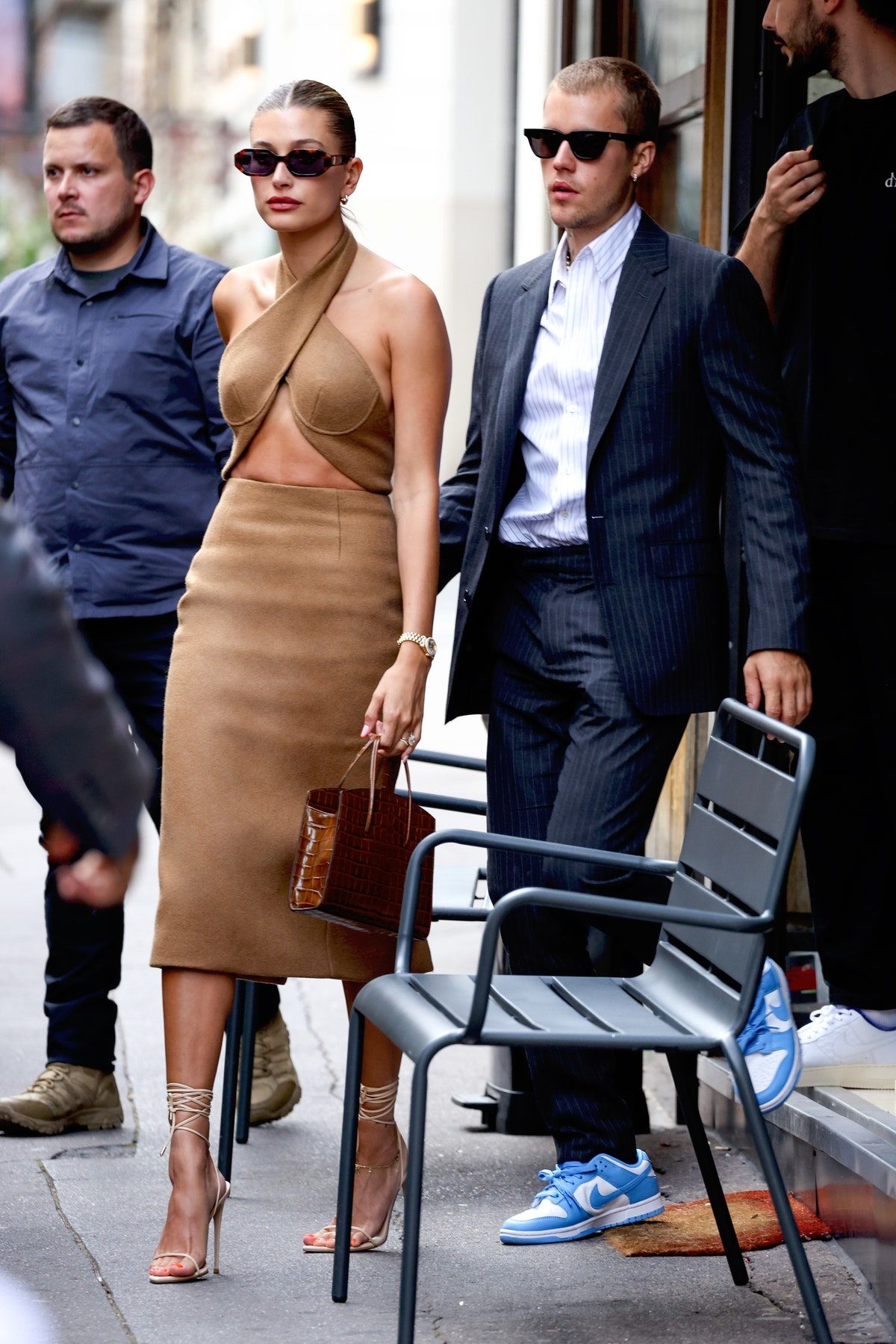 WHO: Hailey Baldwin and Justin Bieber
WHAT: LaQuan Smith dress and Celine suit
WHERE: Paris
WHEN: June 21 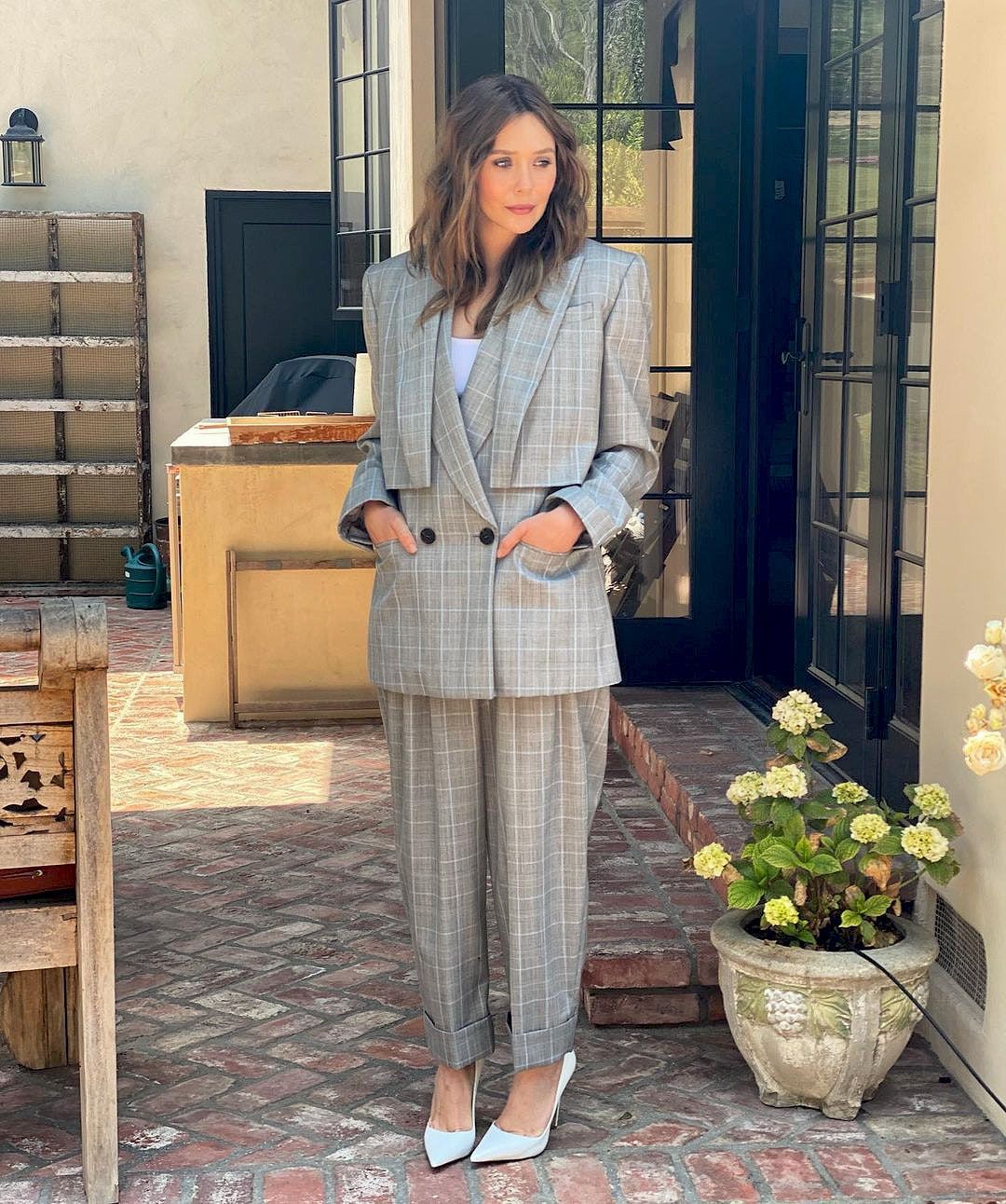 WHO: Elizabeth Olsen
WHAT: Alexander McQueen
WHERE: Instagram
WHEN: June 25 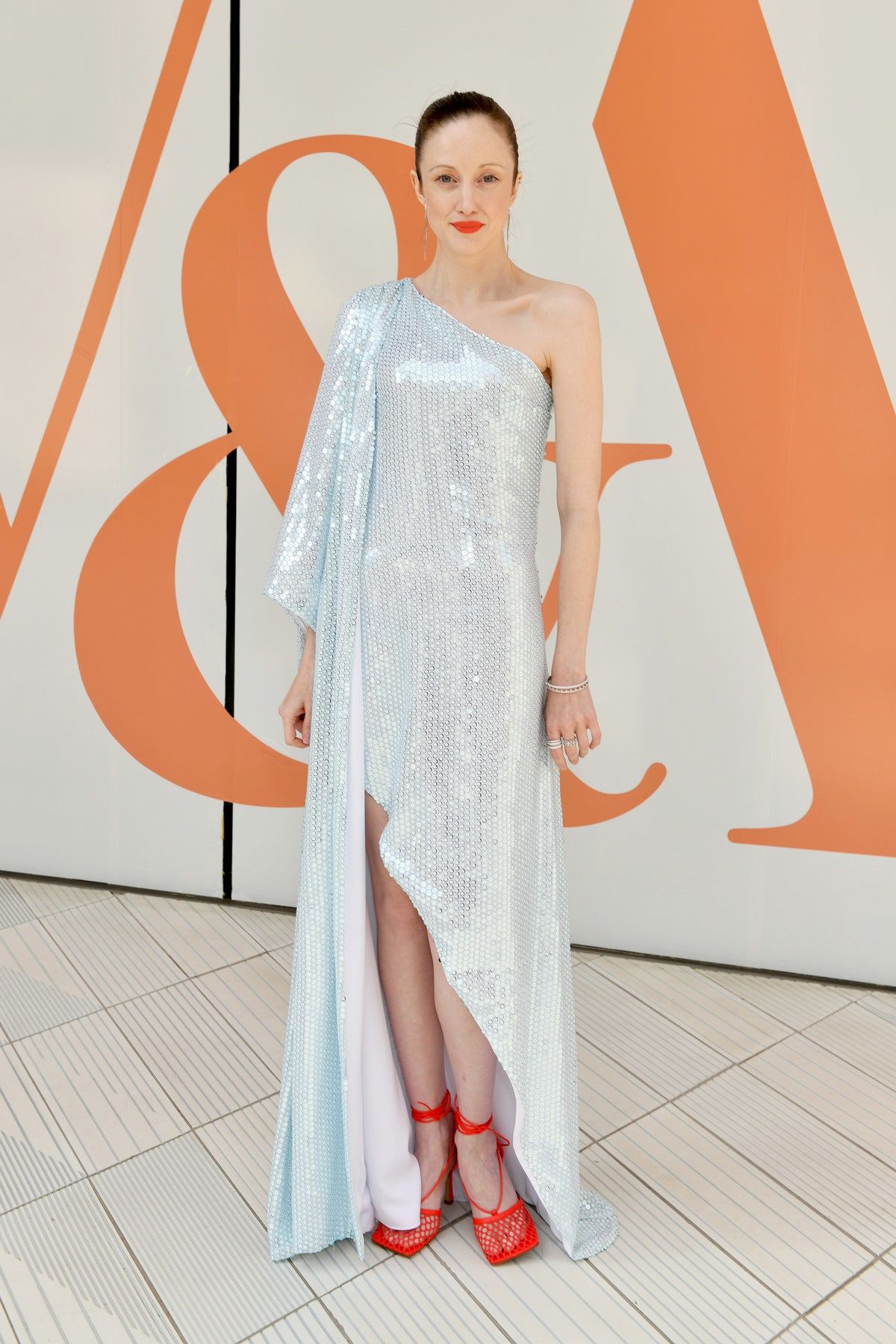 WHO: Andrea Riseborough
WHERE: Victoria and Albert Museum Summer Party
WHEN: June 23 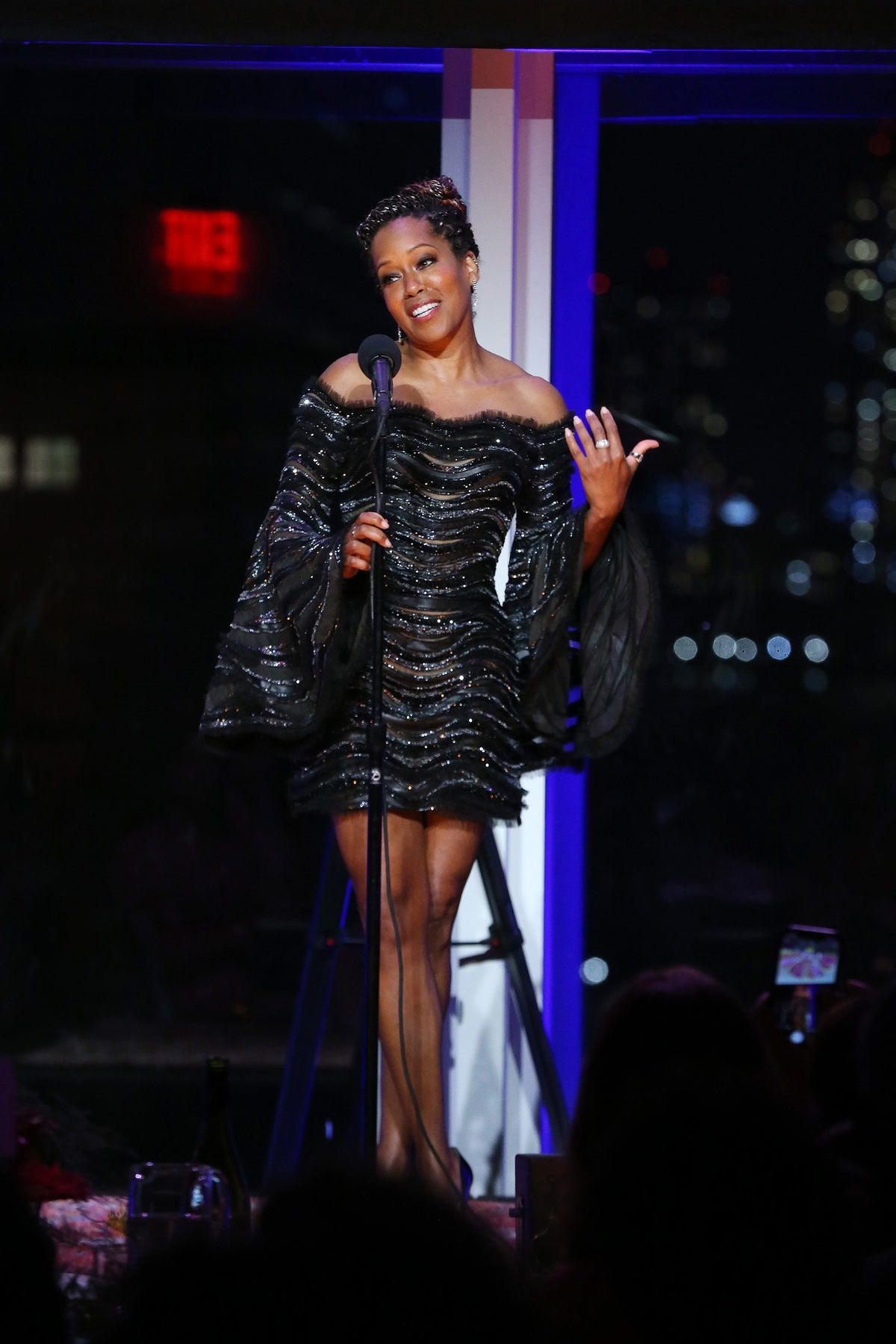 WHO: Regina King
WHAT: Versace
WHERE: Bring On The Light: The 2021 Moth Ball
WHEN: June 22