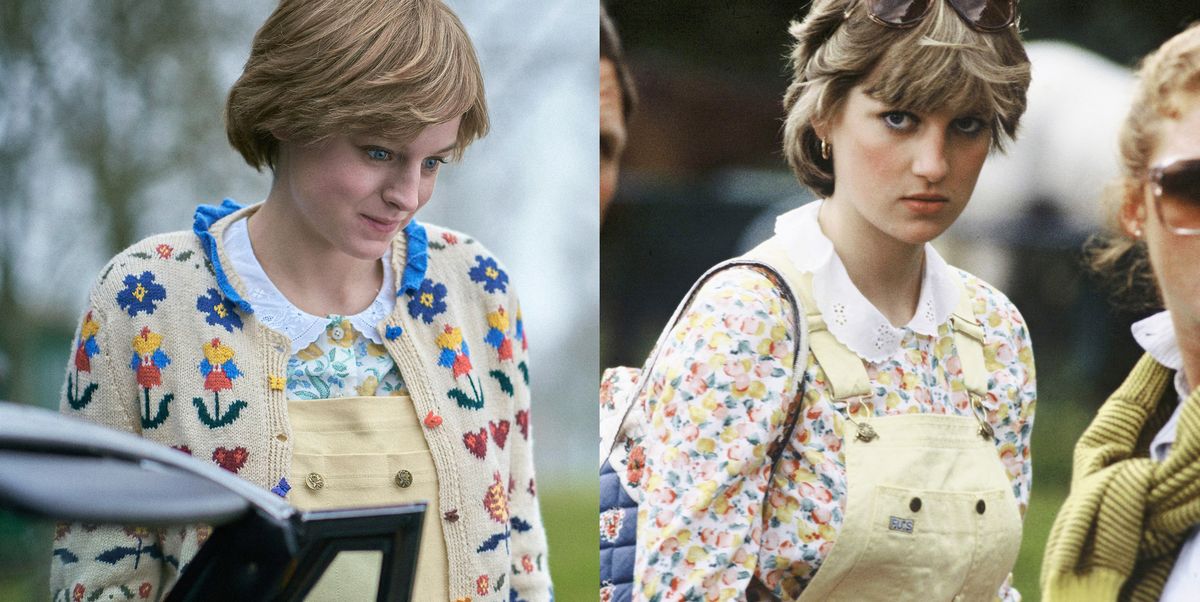 It's uncanny! When you have one of the largest budgets in Netflix history, it's only proper to go all in. At $13 million an episode (yes, even higher than Stranger Things), The Crown is no stranger to putting dollars where it matters.

Whether it's shooting on location at historical sites like the famed Ely Cathedral or spending $37,000 on a single dress, they know where to put money.

Especially when you're capturing the story of icons like Diana Spencer, the shy 19-year-old kindergarten teacher turned People's Princess.

Di is a big part of the season that dropped on Netflix on November 15—bringing a whole lot of drama and great '70s and '80s fashion inspiration with it. In honor of The Crown's return, we rounded up the best Princess Diana outfits the show has recreated so far.

While the show doesn't always replicate ensembles exactly as they were in real life, sometimes they match up so well it's like we're seeing double.

Originally Worn In May 1981 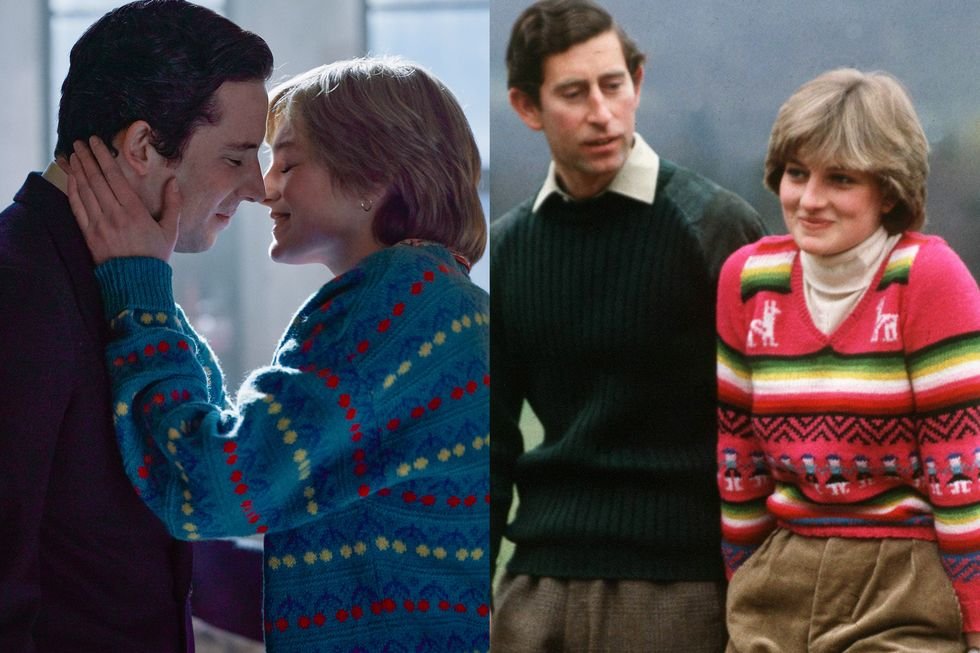 The newly engaged couple were photographed before their wedding at the Craigowan Lodge on the Balmoral Estate in Scotland. While it must have been hard to find a sweater as iconic as the pink one, would it be a crime to say I love the blue a little bit more? 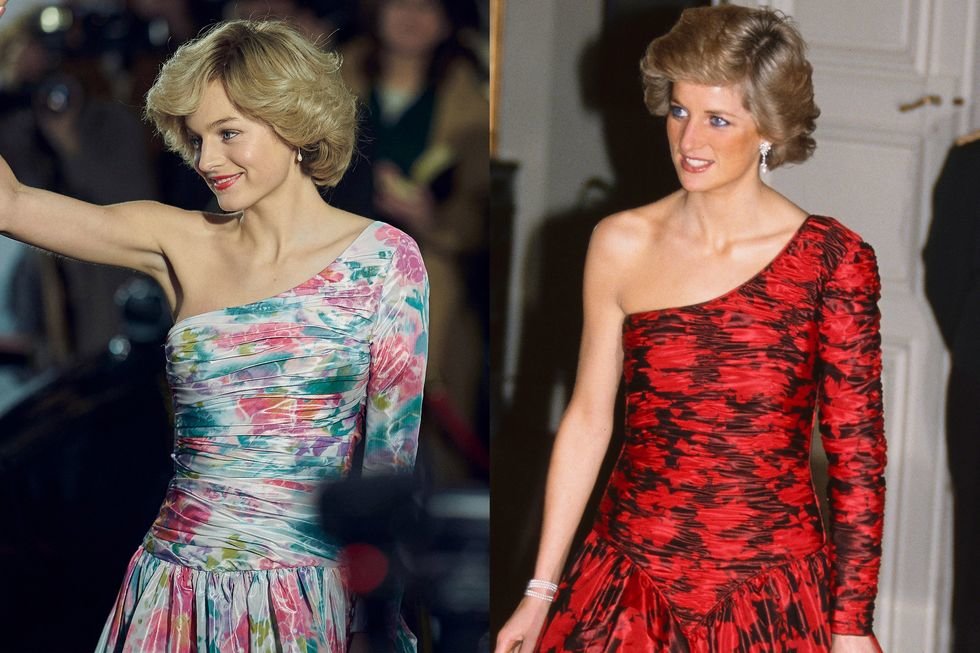 The one-shoulder gown of my dreams by Catherine Walker was seen at a dinner at the British Embassy in Paris, France, hosted by the British Ambassador to France. I will say I love the bright hues of The Crown's revamp. 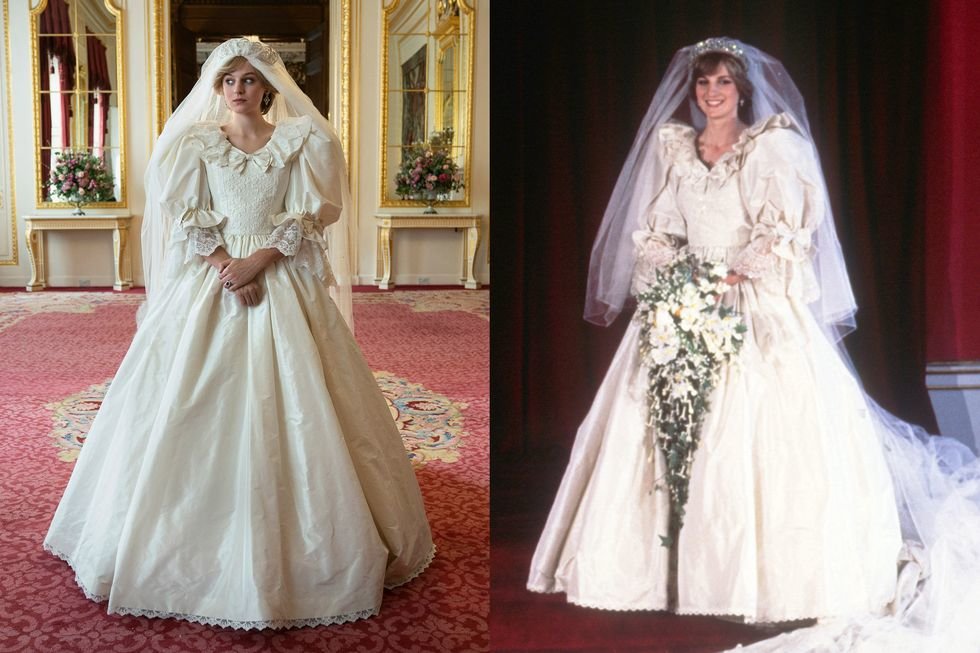 The wedding dress to end all wedding dresses, Emma Corrin, who plays Diana, said 10 people had to help her put on the replica of Diana’s gown. The famous piece had some help from the original designers, Elizabeth and David Emanuel; they gave the show their patterns of the original dress to make their own crazily accurate version. 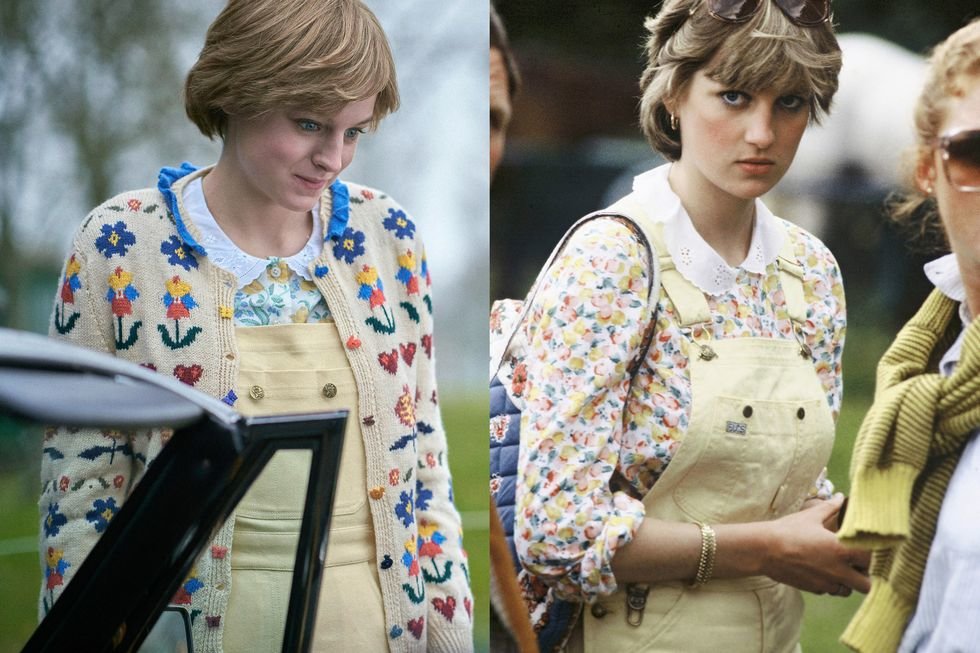 Polo match chic much? Princess Diana was seen wearing these iconic yellow overalls with a floral blouse at a polo match at Cowdray Park Polo Club in Gloucestershire, United Kingdom. On The Crown, they added a floral knitted cardigan to the ensemble, and frankly, we're obsessed. 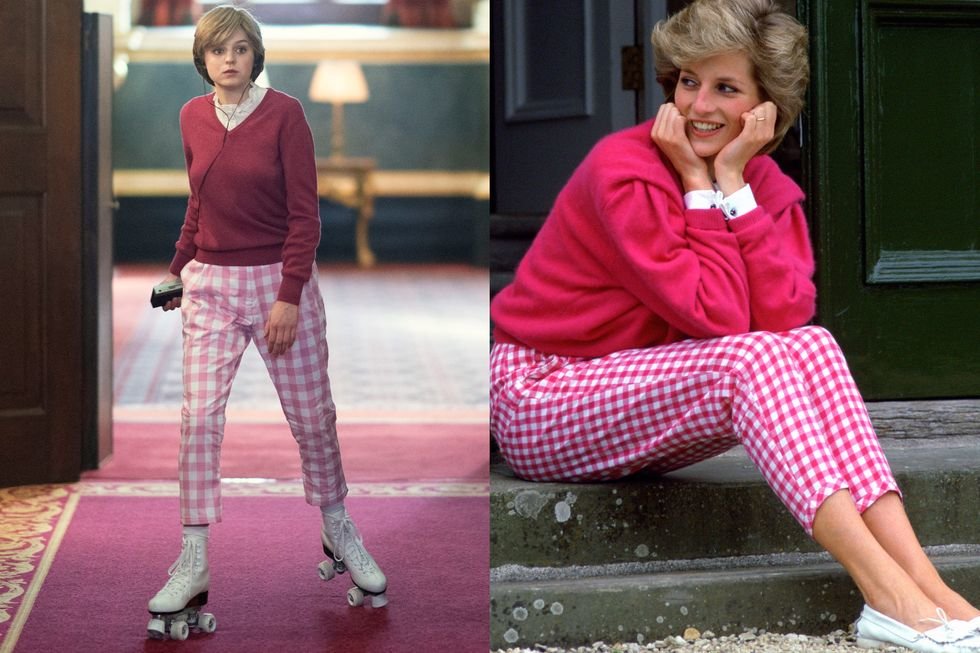 Instead of rollerblading through the halls of the royal palace, Princess Diana wore this outfit to play with her sons outside on Highgrove's grounds.

Before becoming a princess, Diana loved to wear sweater vests with feminine blouses while working at the Young England Kindergarten School in Pimlico, where she worked as a nursery assistant. Paying homage to her younger years would be nothing without the initial necklace around her neck. At the Cannes Film Festival in France, Princess Diana wore a flowing chiffon blue ballgown designed by one of her favorite designers, Catherine Walker. The Queen's cousin, Lady Elizabeth Anson, once spilled that Prince Charles knew early on in their marriage of her massive popularity, reportedly telling aides, "They've come out to see my wife, they haven't come out to see me." Before becoming a royal, Princess Diana had a thing for exquisite collars, like this lettuce trim sweater with a light jacket thrown over it. "Fashion might not have been a priority, but she loved to experiment," said her stylist Anna Harvey to Britain Vogue. 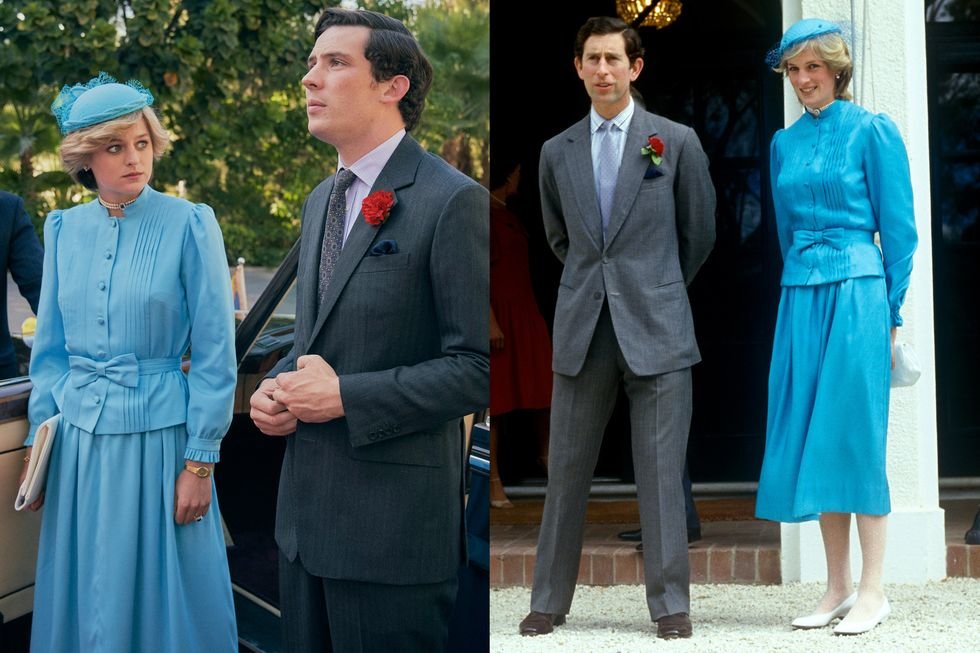 This very, very blue number was seen on the couple's first overseas tour together, a six-week tour of Australia and New Zealand with a 10-month old Prince William along for the ride. It was the first international trip for the 22-year-old and the first tour that William had ever been on. 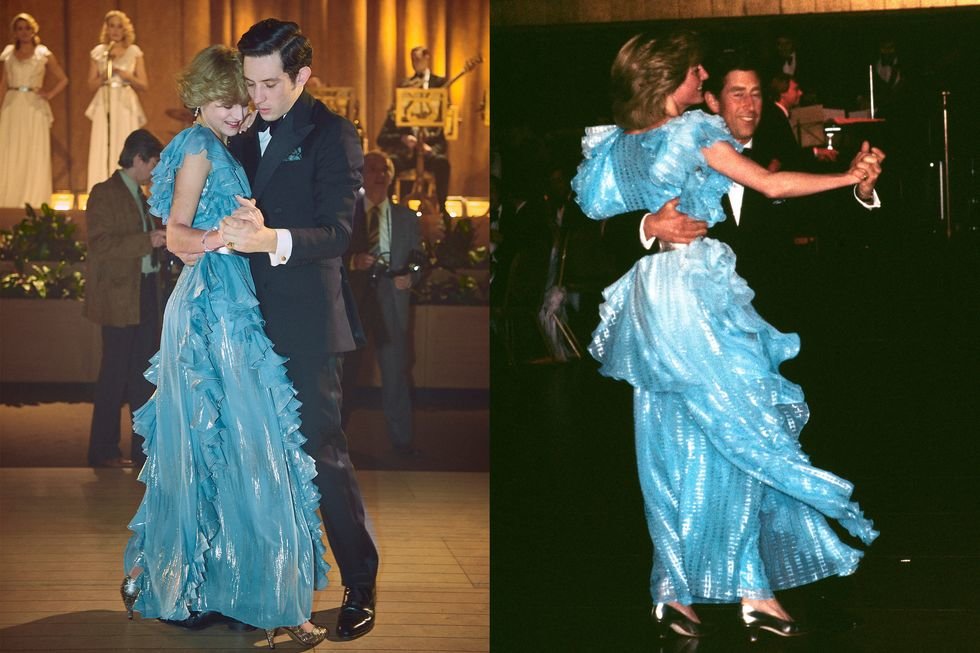 Another great outfit was worn during the Australia and New Zealand tour! Diana wore a frilly blue gown by Bruce Oldfield to a gala dinner and dance at the Wentworth Hotel in Sydney. It's estimated during the tour that the couple shook around 2,000 hands per day, leaving Diana's with red and sore hands every evening. 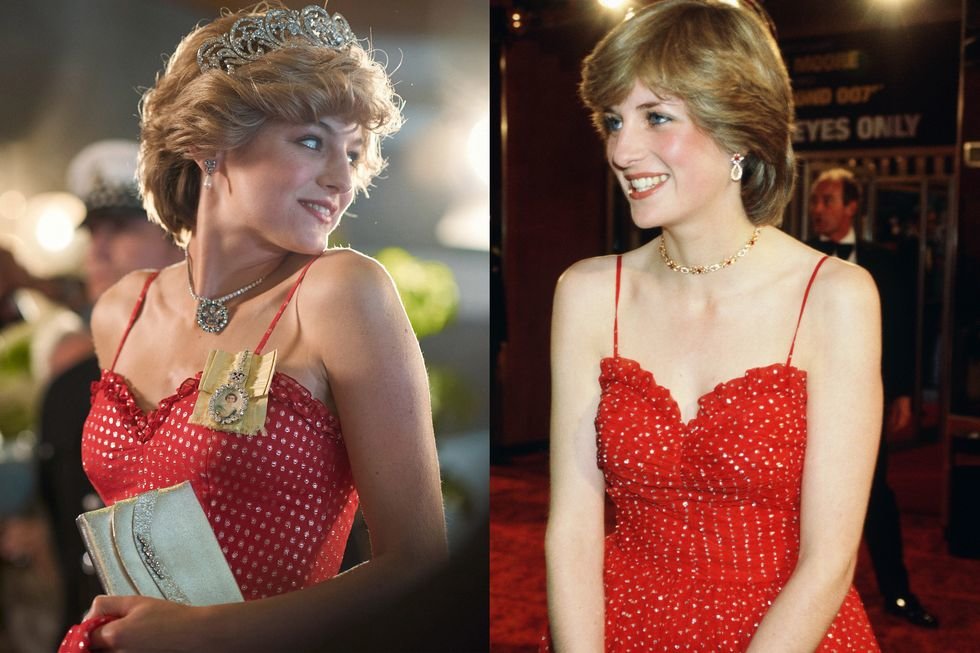 At the London premiere of the Bond film For Your Eyes Only, Diana wore a red and gold spangled chiffon gown by Bellville Sassoon. The event took place a month before their royal wedding. Di, Prince Charles, and Princess Margaret were all in attendance. Post-engagement, Diana was photographed leaving her apartment wearing a Christmas-y patterned cardigan. Her pie-crust-collar blouse was tied with a bow-tie detail that added a whimsical touch to the outfit. At the Braemar Highland Games in Scotland, Di wore a marvelous button tartan suit by Caroline Charles and a tam o'shanter hat. She would later re-wear the suit to attend a tree-planting ceremony in Hyde Park a month later. Diana wore a high-neck blue floral dress to their hour-long wedding rehearsal at St. Paul's church. Funny enough, First Lady Nancy Reagan was also in attendance at the pre-wedding event. "The thing I remember most was how young she was, young and happy," said Reagan on meeting Diana before her wedding. "I was sure it was going to be a wonderful marriage. We all thought it would be. It really did seem like the fairy tale that people still talk about." 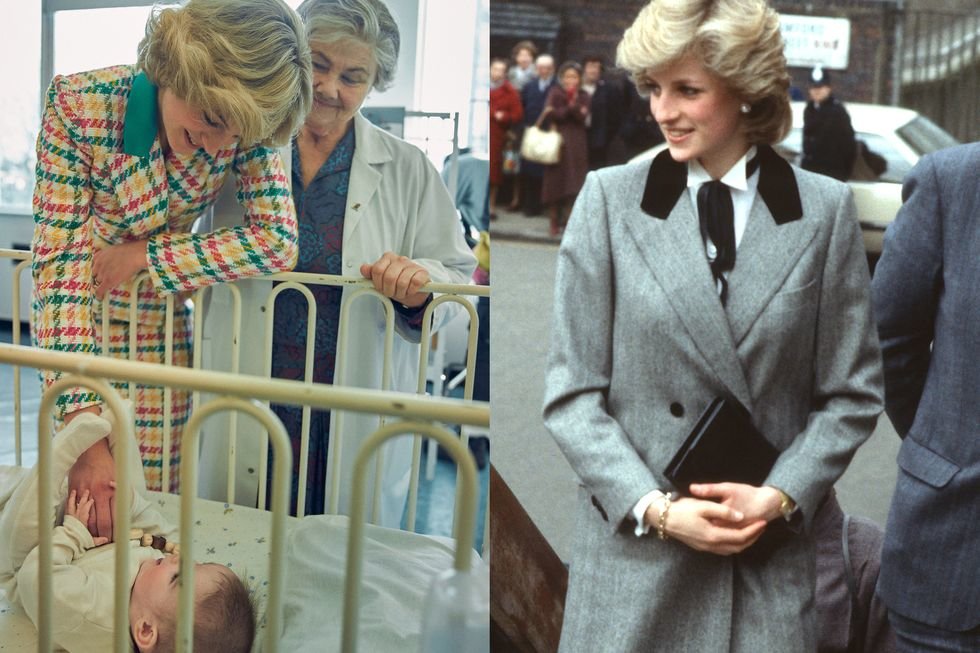 During a visit to a children's hospital in London, Princess Diana wore a Herringbone coat with velvet collar and a tied bow. You can see how the show mimicked the strong structure of Diana's coat with colorful flair on the left.