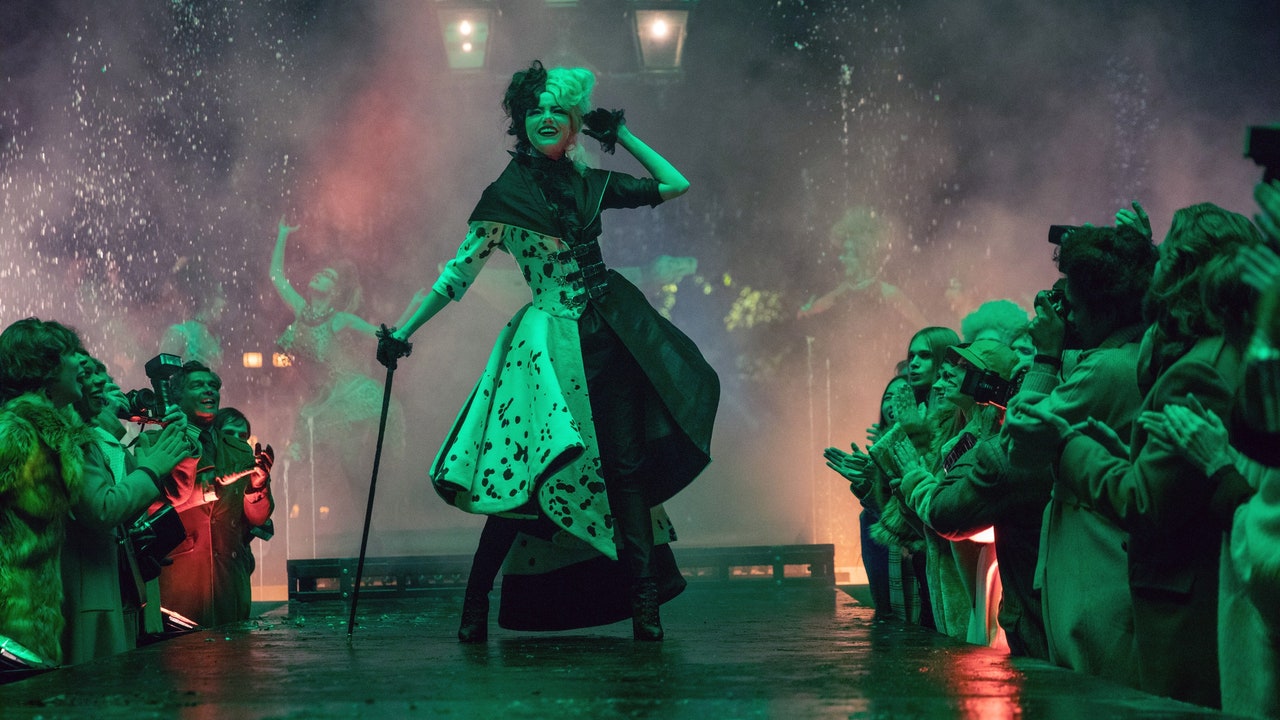 The new Disney origin story, starring Emma Stone, holds more truths about the fashion industry than it might initially seem.

Disney’s latest origin story, Cruella, begins with a lengthy prologue delving into Cruella’s childhood, all the way back when she was just Estella. Born with a shock of black and white hair and a fiery temper, this slightly overlong introductory passage sets up Cruella’s lifelong hatred of dalmatians after a trio of dogs push her mother off a cliff to her death. (Yes, that really is how they explain it.) Making her way to London, our protagonist-or antagonist, depending on how you look at it-is picked up on a park bench by the pair of petty criminals who will eventually become her henchmen. With that, we jump forward to meet her as a young woman, played with a delightfully hammy British accent by Emma Stone, as she takes her first steps toward her dream of becoming a fashion designer with a job at the legendary department store Liberty’s of London.

While the job largely involves scrubbing toilets and being berated by her haughty manager, Cruella’s has her eyes on the prize: overhauling the staid window displays, which feature Biba-esque dresses and floppy sun hats that nod to the film’s time setting, which sits roughly around the end of the Swinging Sixties. After necking a bottle of whiskey, Cruella rips apart the gown to include a dramatic skirt crafted from layers of ruched newspaper, marking her renegade design spirit as more in line with the punk scene that erupted out of London in the ’70s. It attracts the attention of the greatest designer of her day, the Baroness von Hellman (Emma Thompson), who immediately hires Cruella to work in her studio.

As a designer, Cruella’s signatures are established with a look that merges the deconstructed bustiers and bustles that rocketed Vivienne Westwood to fame with the Duchampian spirit of John Galliano’s Dior newspaper prints; and, by extension, the newspaper prints pioneered by 20th-century fashion’s first true provocateur, Elsa Schiaparelli. With the help of Jenny Beavan’s playful costuming-whose Oscar-winning work has lit up the screen in everything from Merchant-Ivory period dramas to 2015’s Mad Max: Fury Road-it makes a point of wearing its reverence for fashion history on its sleeve, even when the timeline of where exactly it is placing Cruella’s aesthetic is muddled. (Understandably so, given that it’s clearly meant to be more about an attitude than pitch-perfect historical accuracy.)

These various fashion history references aside, however, the first scene in which Cruella presents a dress at the Baroness’s studio makes it clear that the film isn’t afraid to rely on broader clichés about the industry. The Baroness walks down a line of dress samples, each designer standing nervously alongside their mannequin, before launching into a barrage of withering put-downs. “Foolish … unhinged ... well, you’re fired,” says Thompson, who is clearly having the time of her life hamming it up as an acid-tongued boss from hell.

Upon reaching Cruella’s gown, she uses a scalpel to slice its back off, nicking Cruella’s arm in the process and drawing blood, before reluctantly complimenting the dress. Instead of calling out for a first-aid kit, though, she holds up Cruella’s bleeding wrist and asks her fabric department if they can source a textile in that particular shade of red. (Consider Thompson is a walking, talking manifestation of the “gaslight, gatekeep, girlboss” meme.) 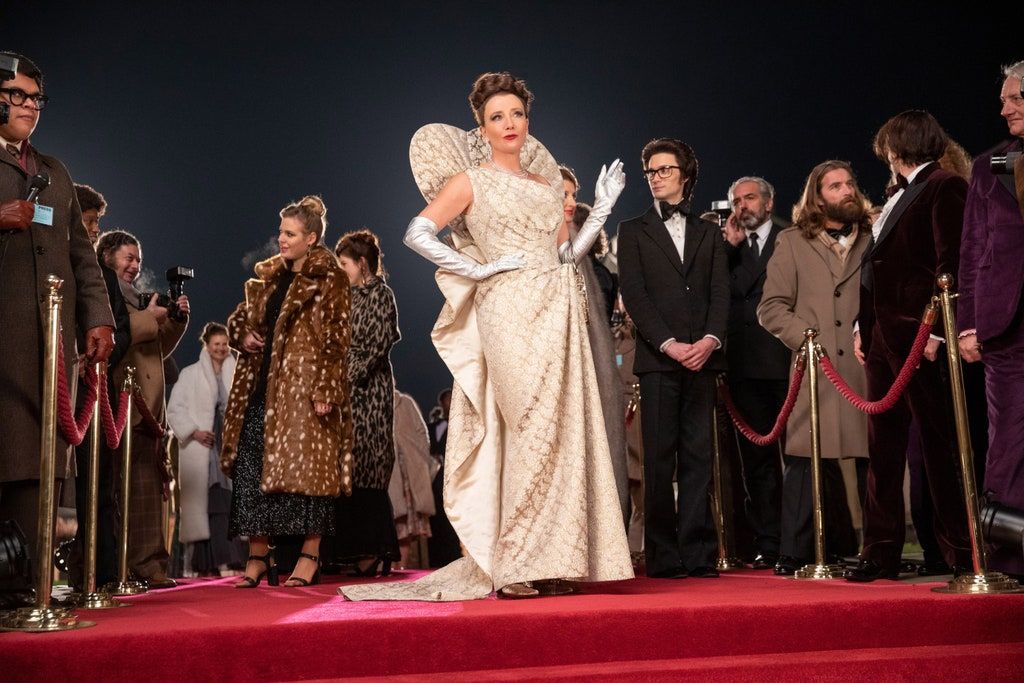 The stereotype of the female fashion svengali as sociopath-and her assistants as unthinking loyalists-is hardly new. While acknowledging the countless revelations of toxic work environments in fashion, an insightful piece for the New York Times by Vanessa Friedman draws a convincing line between the depiction of fashion on-screen as a “gilded cesspool,” and the latent misogyny such an interpretation entails. Though the film vaguely gestures at real-world issues that plague the fashion industry to this day, whether workplace exploitation, sexism, or the over-inflated egos that are an inevitable product of its culture of genius, it doesn’t always pull it off.

Still, most of the time, these missteps feel amusing rather than offensive. The idea that the most storied brand in 1970s London was called “House of Baroness,” a name that sounds more like a clothing line launched by a Real Housewife than a couture house hand-crafting empire-line satin gowns, is one such unintentionally funny moment. In a number of scenes, it perfectly captures the campy thrill of the more bombastic kind of fashion show pioneered by Cruella’s real-life inspirations like McQueen, Galliano, and Karl Lagerfeld, and has found latter-day champions in designers from Rick Owens to Olivier Rousteing. That it sometimes bungles these broader points is perhaps less indicative of any kind of antipathy towards the more unsavory corners of the industry, and more a reflection of what Cruella actually is: a fantasy film, and a Disney production; one that in its very nature it has to keep a younger audience interested too. 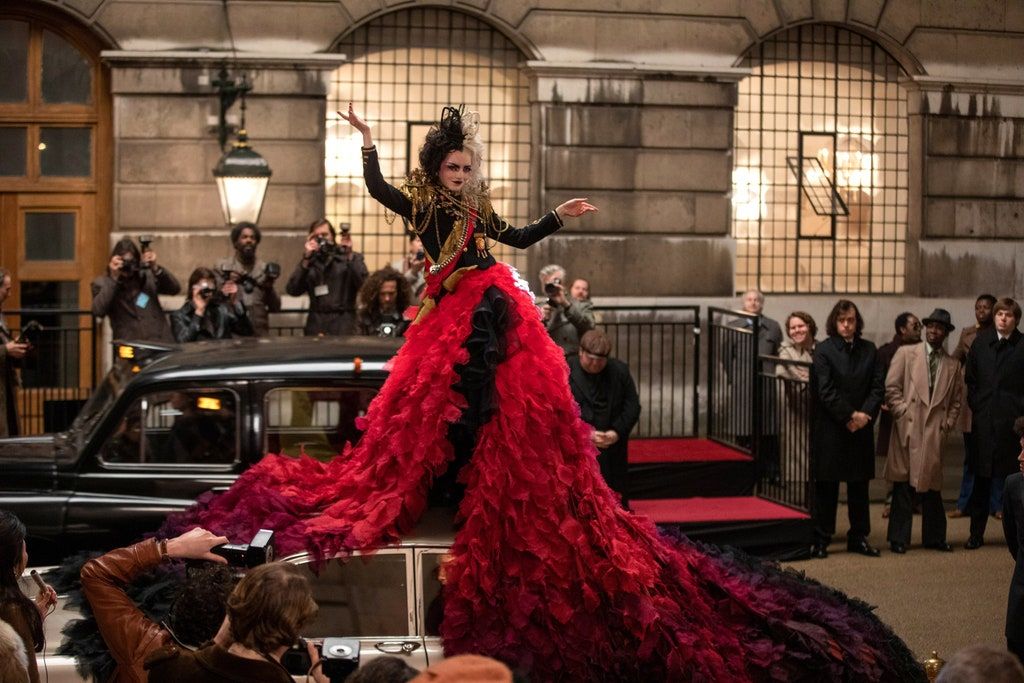 Yet I still couldn’t help feeling that, in all its OTT spectacle, Cruella was attempting-and so very nearly succeeding-to make different points about fashion to what I initially expected, however clumsily it went about doing so. At the end of the day, the movie delves into the challenges of becoming-and, more terrifyingly, remaining as-a leading voice in fashion. How commercial pressure and the unrelenting appetite for newness can turn an otherwise normal human being into a monster. How a healthy rivalry can quickly evolve into something myopic and ultimately self-destructive. And finally, the transformational power of getting dressed up, whether that’s the strange freedom offered by slipping on an ornate mask, how a sequined jumpsuit can turn you into a glam-rock god for the night, or how a fur coat can inspire a lifelong bloodlust for the skin of dalmatians. (Perhaps that final example is a little more specific, come to think of it.)

Even if we never see her undergo any kind of training, it’s clear that Cruella’s blood, sweat, and tears have gone into establishing herself as a designer. She is obsessed with fashion-and her obsession is infectious. As a film, Cruella’s flashes of insight arrive when it captures that exhilarating, lightning-in-a-bottle energy when a new fashion talent arrives on the scene. Sure, the final product of Cruella is melodramatic, decadent, and a little messy. But-true to both the film and fashion itself-it’s at those moments of creative chaos that the most exciting ideas arrive.